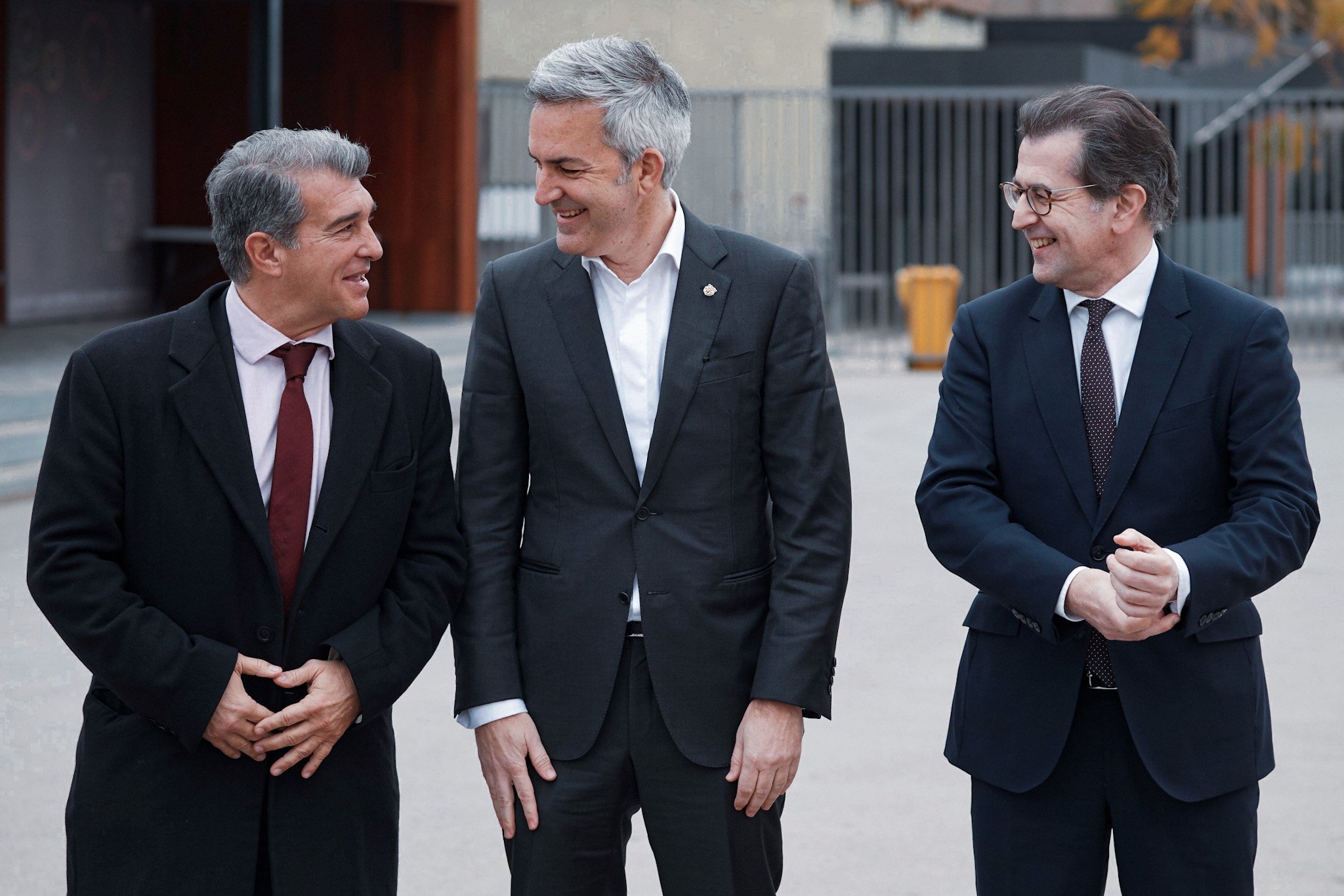 On Sunday, the 7th of March, after an excruciating months-long delay, FC Barcelona will finally elect their new president. The 41st elections in the club’s history are set in a time like no other, but at the same time, hold remarkable resemblance to days of disarray in the past. The challenges which the new Barcelona president will have to face, are monumental in nature and plenty in number.

Since a disastrous end to the 2019-20 season, with an 8-2 dismantling at the hands of Bayern Munich in the Champions League, Barcelona started unravelling. One after another, all of the monsters plaguing the club from within began to rear their ugly heads. And while it was far from pleasant, the campaign provided a major catalyst for change, especially spurred on by Lionel Messi’s near-departure.

Former president Josep Maria Bartomeu and his entire entourage were forced to resign in October just as a vote of no confidence had passed against them. They left behind an ugly legacy of financial ruin, gross mismanagement, a failed sports project and the broken shell of a once-successful team, with its morale subsequently in ruins.

Video: Messi is at the Camp Nou to cast his vote for the first time ever

Now, three candidates are vying to take charge of the club in order to reverse the irreversible. Joan Laporta, Victor Font and Toni Freixa. Ushering in change has been a long time coming, perhaps too long. The vote of no confidence against the incumbent Bartomeu carried optimism aplenty. But given the characteristic inefficiency of the interim board as well, even the most positive news surrounding the club in recent years was marred by uncertainty.

The elections should have been held in November, then perhaps in December and then in January. But the delays were persistent and in the midst of a crippling pandemic, there wasn’t much that could be done. The 24th January date that had been agreed upon further got pushed to the 7th of March. Now, however, there is no more delaying the inevitable. The Sandro Rosell-Bartomeu era is finally coming to an end.

Either one of Joan Laporta, president during the club’s most successful years in history, Victor Font with his innovative and fresh ‘Si Al Futur’ campaign and Toni Freixa, the former spokesperson in Sandro Rosell’s board, is set to take charge of a Barcelona side in a state of heavy transition.

But this new frontier will be the trickiest to navigate. Barça Universal takes a look at the 5 most prominent challenges the next Barcelona president will face in their tenure over the following years.

After Quique Setien’s dismissal, Barcelona legend Ronald Koeman was appointed as head coach a while before Bartomeu’s resignation. The Dutchman took charge of a fragmented squad and has since done quite a remarkable job given the circumstances.

Barcelona are currently second in the La Liga table and have already played in the Spanish Super Cup final. In over a month’s time, they will also contest the Copa del Rey final to try and win their record 31st cup crown. In addition, Koeman seems to have worked wonders for the squad’s morale as well as their sense of collective success.

He has also been responsible for the incredible development of youngsters at the club. With Ilaix Moriba scoring his first goal in a Barcelona shirt last night, Koeman’s faith in Pedri, Oscar Mingueza and his management of Frenkie De Jong and Ousmane Dembele has been near-exemplary.

Joan Laporta, on one hand, believes that the Dutchman’s contract should be seen out. When one looks at the conditions he took over in, there is definitely a margin, according to Laporta.

“We have to respect Koeman, who has a contract. He’s a Barcelona great and deserves all our respect, although results and performances count. The current situation requires experience.”

Victor Font, however, had initially stated rather controversially that no matter how the season goes, he wants Xavi Hernandez to replace Koeman as head coach if he were elected. In hindsight, Font’s statements were too harsh, and he later had to recount them, stating that Koeman may still play a part in his project.

Toni Freixa, on the other hand believes that Koeman should see out his contract if he gets his hands on silverware this season. A tough ask and perhaps not the most realistic, all things considered.

Far and above the greatest challenge that awaits the new president is that Barcelona are facing the worst financial crisis in their 122-year-old history. A staggering debt of 1.173 billion euros is staring the club in its face, with over 700 million of it in the short term.

On paper, every penny that Barcelona earn has to go straight to the pocket of their creditors. Reversing such a major crisis will require major reductions to the wage bill, offloading a few players in the summer to raise funds and negotiations for the debt settlements.

Toni Freixa has already stated that he is against issuing bonds and has apparently made contact with an investor who will offer a massive influx of money, specifically to the Barça Corporate model. This includes four business lines, Barça Studios, Merchandising, Barça Academy and Bihub. Freixa says his board will also have an unpaid advisory committee with competent economists and businessmen.

Joan Laporta believes that he can begin reversing the situation by increasing sponsorship revenues and raising over 200 million euros from commercial rights sales. He also mentioned that he has options like the Barça Digital Hub, improving the Barça Innovation Hub and promoting the Barça Studios platforms, which could bring in an influx of cash. Laporta believes there are definitely ways to recover the debt and that there is a reason for optimism.

His proposal does not rule out financing from Goldman-Sachs and he also believes that renegotitating with banks is essential.

Victor Font says that the club’s public-based ownership model could be at risk and that the club is on the verge of bankruptcy. Font thinks implementing a shock-plan is necessary by restructuring the wage bill and refinance the short term credit. His campaign also placed a major emphasis on the role of content creation to successfully drive a business model.

By now the infamous burofax saga needs no further introduction. With Lionel Messi on the brink of leaving the club he spent his life at in such a bitter manner, the new president has quite the task ahead of him to change the Barcelona captain’s mind.

The reductions to be made to the wage bill also create a slightly complicated scenario here and will definitely be weighing on the new president’s mind. Considering Lionel Messi’s astronomical contract, it will interesting to see what kind of dealings take place in such a delicate financial situation.

Manchester City and PSG have been circling the Argentine like sharks, but he has stayed firm on his stance to wait till the end of the season. Which means there is still cause for optimism. Aside from the Copa del Rey now, silverware this season looks extremely tough. So in order to get Messi to stay, the new president will have to lay out an incredibly convincing sporting project- one that ensures Barcelona and Messi return to their ways as champions in Spain as well as Europe.

One cannot help but think that Joan Laporta with his illustrious past and pre-existing relationship with Messi, has the best chance at writing a new chapter in the incredible romance between the club and its greatest ever player.

Construction of a brand-new stadium has been one of the key talking points for the club recently. The ‘Espai Barça‘ project was approved back in 2018, and is said to cost over 900 million euros. The construction would span five years and be financed over the next 25 years, by selling the stadium’s nming rights.

The “Nou Camp Nou” was agreed upon since the current stadium requires a lot of refurbishing and improvements to its now aged and structurally weak foundations. The project would also see it extend its capacity from 99,345 to 105,000.

However, with the debt running through the roof side by side, the presidential candidates will have to figure out more ways to make the project viable. While Laporta seems to think the project is necessary once the socis approve it, Font has stated his hesitations in the past but believed that with the new board of directors it can be carried out with maximum transparency.

The stadium’s venue is still undecided and whether or not to demolish the Camp Nou entirely or restructure it in parts is also not clear. The project for a new stadium is going to be very complicated logisticall as well as time-consuming.

Filling voids in the squad

With Eric Garcia’s move from Manchester City already imminent, the new president has a whole host of sporting issues to consider. The lack of immediate funds is a massive issue of course, but leaving that aside, Barcelona do have reinforcements to make.

Predominantly, a striker. An out and out number 9 who will fit the bill in the Claret and Blue colours. Since Luis Suarez’s bizzare departure saga, Barcelona have lined up no real replacement for the striker position. In addition, the Uruguayan was let go of for almost nothing to a direct rival, which has further complicated matters for the Blaugrana in their league pursuits.

All the current candidates seem to agree that Borussia Dortmund star Erling Haaland is a major option to consider. The Norwegian is young, immensely talented and already seems to be thriving at the top level in European football.

Joan Laporta in particular, will certainly be able to pull some strings in that regard since he has a good relationship with Haaland’s agent Mino Raiola. Laporta is the clear frontrunner to win the elections and he has already hinted towards contact with certain ‘superagents’ in world football.

Aside from a striker, the squad also needs to bolster depth in the left-back position. With Jordi Alba ageing and sometimes struggling for form, coupled with Junior Firpo’s largely failed transfer, the club is in dire need of a competent left-back.

The new president will face a host of tough decisions with regards to offloading certain players. However, it will be necessary in order to alleviate funds and make moves that are urgently required.