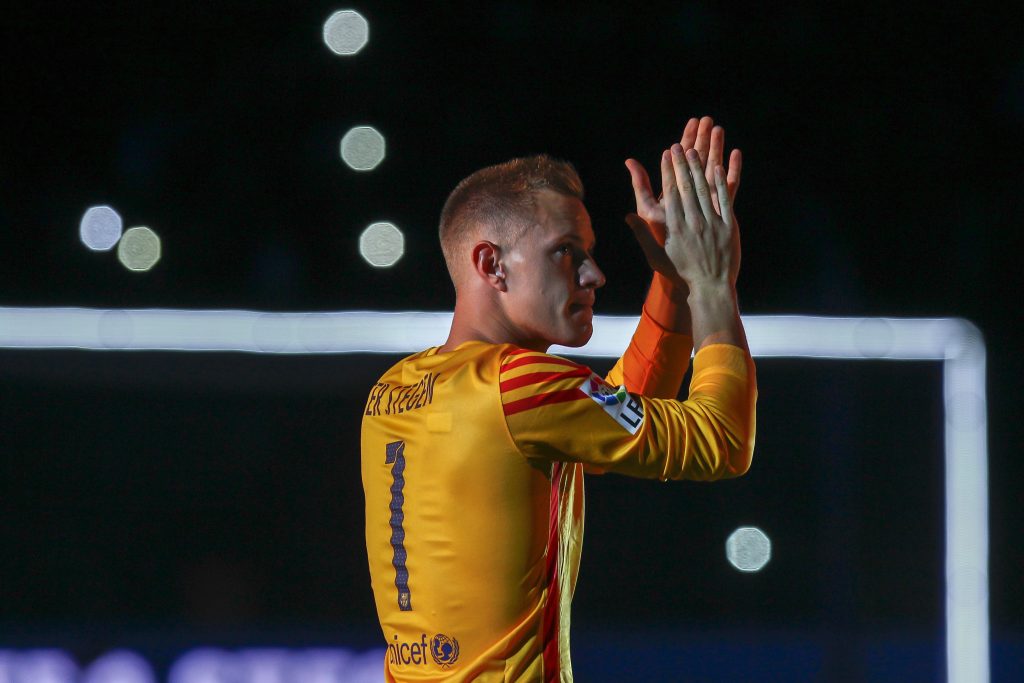 The rise of Marc-André ter Stegen has been instrumental in Barcelona’s success in recent years. He continues to pull off vital saves for the Blaugranans and continues cementing his place in the club’s history. With the win over Valladolid, Ter Stegen hit 100 clean sheets as a Barcelona goalkeeper, another astonishing milestone.

Once a reserve goalkeeper for a Borrusia Monchengladbach side, now considered the cream of goalkeepers worldwide, Marc-André ter Stegen has indeed come a very long way. It would be fair to say that he is one of the only default starters for Barcelona at the moment. Widely regarded as the second most vital player for the side after the talismanic Lionel Messi, his role is of paramount importance. His performances often generate a ray of light even at the most desolate times. If Barcelona are still 2nd in the La Liga standings after a horrendous season such as this, the German deserves major commendation is covering up that shadow.

In what is debatably one of Barcelona’s best transfer moves in recent history, the German was brought into the side for €12m. Being brought into a club of this stature to replace a bonafide legend such as Victor Valdes is daunting indeed. An early injury in the preseason didn’t help his cause either and he lost his spot to the Chilean, Claudio Bravo. However the club believed in him, and he has never looked back since. As he continues to baffle audiences worldwide, the game against Real Valladolid was a special one for him. It marked his 100th clean sheet in the iconic Red and Blue colors of Barcelona!

It was on the 22nd of May 2014 that the young German proudly donned the Blaugrana colours for the first time. An early injury blow didn’t do him any favours either. His career at Barcelona got off to a bumpy start. In his first season(2014/15), he only played 21 games for the Catalans. Despite not getting any league starts, he put up a majestic run at the Champions League. He kept 6 clean sheets in 13 games for the legendary team that finished as champions. He also started in the Copa del Rey games where he once again had a 50% clean sheet record (4 out of a possible 8).

after a rough but impressive first season, his involvement in the first team gradually went up in his second season. In 2015/16, he played 26 games for the azulgranas. After not making a single league start in his debut season, the German wall earned himself 7 starts in the league whilst holding on to his Champions League starting role as well. The year added 9 more clean sheets to his tally. Despite it not being a stellar year in terms of statistics, his performances were on the rise and he began to stake a claim for the No.1 spot. On 25th August 2016, the club announced Claudio Bravo’s departure to Manchester City. From that day on, Ter Stegen became the first choice starter beyond doubt.

The season of 2016/17, though not great for the club was a very important one for the German shot-stopper. He made 46 starts for the club across all competitions, starting all games in La Liga and the Champions League. The team went on to fall short in both competitions and won the cup as a consolation. He only managed 13 clean sheets in 36 league starts, something he would go on to improve on considerably.

After breaking through and establishing himself in the team, there has been no looking back. In the season of 2017-18, he started all the games for the Catalans except for Copa del Rey. He had a phenomenal season even by his sky-high standards. The season ended with him holding a 50% clean sheet record (24 out of 48 stars), which guided his team to another league title.

? — Negotiations between Ter Stegen and Barcelona regarding a new contract are going well. [sport] pic.twitter.com/4QAydCWkVV

Last season, he continued to impress and racked up 49 starts for the club where he went on to keep a clean sheet on 23 occasions. Despite his sensational performances, he couldn’t win the starting spot for his country at the world cup. The reasons for that are a whole different story, however. He earned the privilege of wearing the captain’s armband for the first time against Huesca, something that reflects his stature in the club. Another remarkable achievement was that of 2 successive clean sheets within a week at the Bernabeu when Barcelona clashed against their eternal rivals back to back in different competitions.

This season again he has been nothing less than sublime. He has 14 clean sheets in 35 league starts, which is not close to his best statistically. However, it wouldn’t be unfair to say that he has saved the face of the team on so many nights. His performance against Dortmund at the. He pulled off 4 saves including a penalty and a sensational double save to save 2 points for the Catalan giants. It was a performance that will go down as one of the great goalkeeping displays of all time. And now with 65 clean sheets in La Liga, 26 in the UCL and 9 in the Copa del Rey, Ter Stegen has made it to 100 clean sheets!

Ter Stegen is not a statisticians goalkeeper. Numbers seldom manage to highlight his impact on the field. Having clean sheets is the smallest aspect of a goalkeeper’s role. It is, however, his ability to pull off match-winning saves repeatedly that makes him so highly respected.

Statistically, Ter Stegen might not even be the best goalkeeper in La Liga. Jan Oblak has come up on top year after year for his staggeringly low number of goals conceded. One must, however, remember that a low-blocking Atletico Madrid side is a goalkeepers paradise. Ter Stegen has been on the back of a lot of defensive unsettlement at Barca. The centrebacks often push up to the half-line, and the german is often left in 1v1 situations where only his reflexes can rescue the team.

It is also a known fact that the Blaugrana defense has never been the same since the departure of Carles Puyol. Since the departure of the Legendary captain and leader, the side has often lacked a voice to order around the troops. In recent times, MaTS has taken up that role too. He has become more vocal about what he expects from his defence and the positioning of players in set-pieces. It is truly a wonderful sight!

? — Ter Stegen: leading from the back. The German was directing his teammates against Leganes. He guided Arthur to be well-positioned defensively. Stegen also told Umtiti to ‘push Leganes out’, and he told the CBs to be ‘careful with the marking’. [sport] pic.twitter.com/m2ijmv9EzM

A goalkeeper’s job is often a thankless affair. It is very rare for a keeper to get recognition as being match savers or vital players. But the 28-year-old is widely respected and loved throughout the fanbase and the world. His work rate and ethic are admirable, and the appreciation he receives in itself speaks volumes of his greatness. He will certainly be the No.1 for Barcelona for years to come, maybe even a future captain. Reaching 100 clean sheets is just the first of many milestones to come for Ter Stegen, surely!