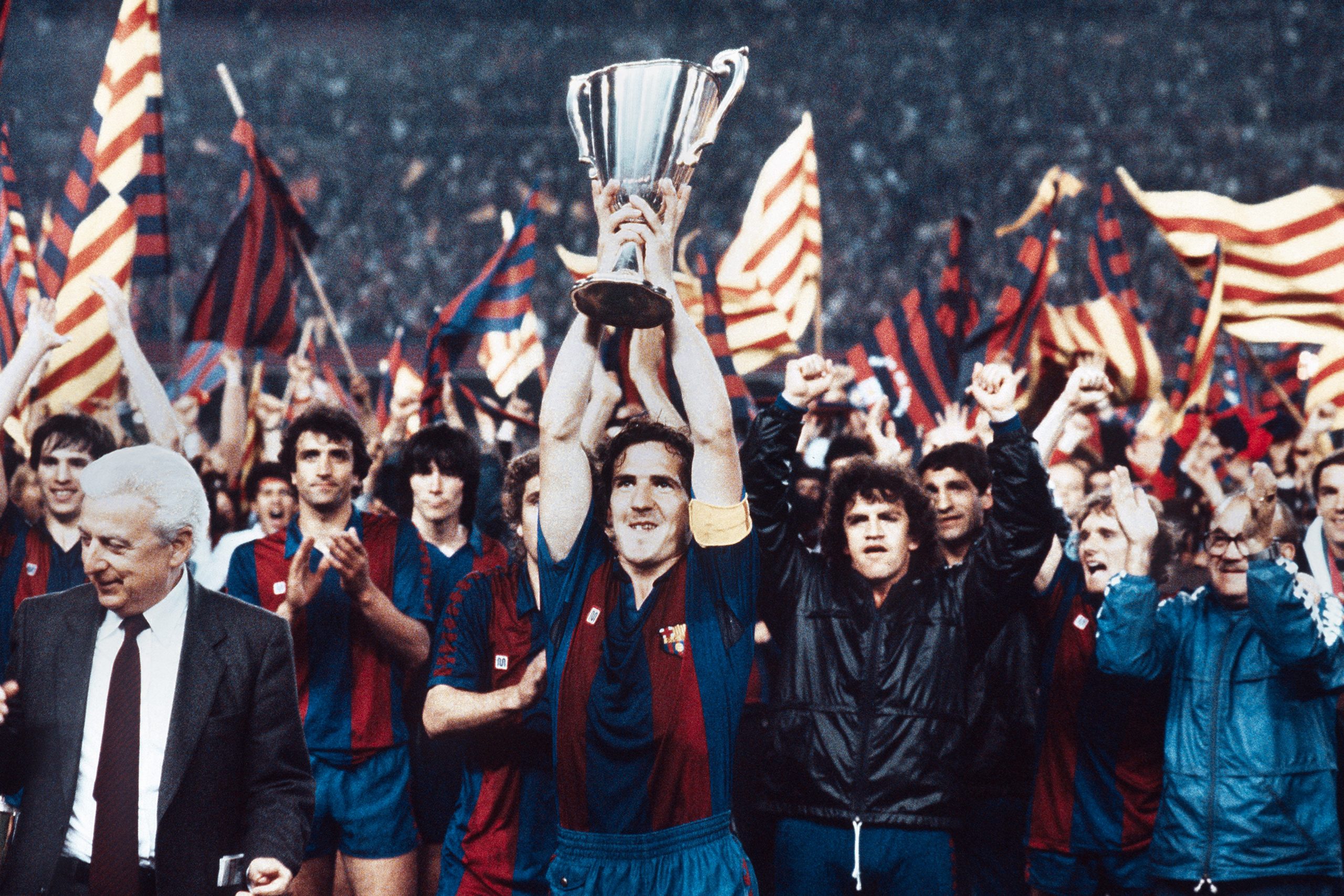 It was early May 1986. Barcelona prepared for history. After the loss in 1961, the club searched for its first European Cup in history as they faced Steaua București on familiar ground, Sevilla’s Estadio Sánchez Pizjuán. However, several hours before the final, waters had begun to agitate at the Catalan camp.

English coach Terry Venables had announced to established first-team player José Vicente Sánchez, or Tente Sánchez as an abbreviation, that he would not play.

“He argued that [Steaua’s legendary forward Marius] Lăcătuș was strong in the air and he preferred other players to counteract it. I told him that I did not agree, but that I accepted it”.

But then he was shocked. Tente later found out that not only would he not be a starter; he had been left out of the squad list altogether.

Things got heated between player and coach. Very heated. Tente was furious and went straight to the manager.

“I did not mince words. I called him disgraceful and liar and told him that I refused to travel to Seville just to participate in a party. After leaving the pitch I came across [president Josep Lluís] Núñez and said to him that I was not going to travel; that’s where I knew that my career at Barça was over”.

Therefore, Tente’s last game for Barcelona was one he did not play. He stayed in Catalonia, also because his son Gerard was born on 6 May. One day later, Barça lost the European Cup final. 0–0 after 120 minutes, and a fateful penalty shootout that ended in drama for the thousands of Culés that had travelled to Seville, and in glory for champions Steaua.

Tente, at 29 years of age, had only played 9 league games in his eleventh and final season with Barcelona’s senior team and would leave that summer of 1986 to Murcia, by then in the First Division.

Early Years and the ‘shift’

Tente Sánchez, born in Badalona in 1956, developed at La Masía and was one of the products of the man who was shaping Barcelona’s academy: Laureano Ruiz. Ruiz had been laying the foundations for Barcelona’s system and helping it be implemented across all its different levels.

He was also the first-team coach for a concise period of time, towards the end of the 1975/76 campaign. It was him who handed Tente his official debut, first in the Cup against Real Oviedo and then in the league in a derby with Espanyol. Unfortunately, that would be an encounter to forget for the Blaugranas, as they lost by 3–0 to their local rivals.

Back then, once an academy product debuted in the senior side he could not return to the B team – at the time called Barça Atlètic, so once he got his first appearance, Tente was permanently promoted to the main squad. From the very first moment, though, he proved that he would be an indispensable addition in the midfield for any coach.

After Laureano Ruiz, the iconic and revolutionary tactician Rinus Michels, even if less strict and fundamentalist than in yesteryears, returned to Barcelona. In the 1976/77 term, Tente already featured in 26 league matches, with the Spanish competition by then including 18 rather than 20 clubs.

His tactical discernment, capacity to cover a lot of ground, and reliability – he only got two red cards throughout his career – was forever appreciated by whichever manager he had, making him a regular starter until his final season at the Camp Nou and also earning 14 appearances and a call-up to the 1982 World Cup with the Spanish national team.

Nevertheless, another defining moment in his career occurred with the arrival of German coach Udo Lattek, who replaced Helenio Herrera. Lattek used to transform his interiors or central midfielders into full-backs to favour the ball circulation in build-ups, and Tente Sánchez was one of those affected.

He was initially used in that system by Lattek and went on to perfect it under César Luis Menotti, Tente transitioned into right-back and he injected intelligence and rhythm to the position.

The comparison with Sergi Roberto seems accurate. Not a ten out of ten in any facet, but his spatial awareness and smartness made him key every year.

As Barça TV journalist Jaume Marcet expressed, Tente was “A right interior that ended up performing better as a full-back as, without being an academic number 2, he added to the position the knowledge of the game that was more common in a midfielder”.

What attributes must a captain have? These depend a lot on the era and the player. There is not a list of attributes a captain must meet. Often, s/he must be the voice of the players in front of the coach, club, fans and referees alike. But he can also be the extension of the manager’s ideas on the pitch, which is why Johan Cruyff would later choose José Mari Bakero over a goalkeeper like Andoni Zubizarreta, and why Louis van Gaal selected a midfielder like Pep Guardiola.

A captain, above everything, must be the symbol of the club and the fans must be able to identify with him – despite this has not always been the case. He must be respected inside the dressing room and must be a reliable figure for his teammates.

And this perfectly suits the profile of Tente Sánchez, who became the first-team captain in 1982 after the importance of one-club man Antonio Olmo was decreasing on the pitch. Tente was consistent and ever-present in the side and, in spite of the later clash with Terry Venables, he was a reference point in the squad.

Tente had what in Spain is called “casta”, a combination of courage and commitment to always be in the service of the collective, both on and off the pitch. He wasn’t a star, but he always acted with the club’s colours in mind – the definition of a team player.

Then, his longevity and the fact that he emerged from the academy surely played a part in him wearing the armband. Being a homegrown product is by no means an imperative trait for Barcelona captains, but it is clear that this has been a constant in the team’s captaincy throughout its history.

As future captain Xavi Hernández suggested, being a captain can be “A reward after so many years of linkage to the club”. Wearing the armband is a reason of great honour.

Looking back, captains have also acted as the image with which the fanbase has recognised the different periods in Barça’s history. From Johan Cruyff to Carles Puyol, talking about the captain has also automatically meant talking about the corresponding era. Hence, it is no coincidence that there was such inconsistency in Barcelona’s captaincy during their relatively dark 1980s.

The team had four players consecutively that only lasted two years as captains, as the Catalans only won one league title between 1974 and 1991. The single one was in the 1984/85 season, with Tente Sánchez still in the squad but no longer as the captain.

He did lift a Copa del Rey (the last of the three he won), a Spanish Super Cup, a League Cup (the first of the two he won), and, most memorably, the second of his two UEFA Cup Winners’ Cup titles. In the first one, in 1979, he opened the scoring on the way to a 4–3 win over Fortuna Düsseldorf.

Tente Sanchez (back, second to left) with the armband before squaring up against Aston Villa at Villa Park.

It was only one of his 19 official goals with Barcelona across 346 appearances in all competitions, which at present makes him the 24th player with most games in the club’s history – just above Jordi Alba.

After hanging up his boots at Sabadell in 1990, Tente Sánchez would become the first retired footballer to become an agent.

He even acted as an intermediary in trying to bring Hugo Sánchez, by then at Real Madrid, to Barcelona as a request from coaches Johan Cruyff and Carles Rexach. The transfer did not come to fruition, though, as president Josep Lluís Núñez surveyed Culés across the city, who refused to sign the Mexican.

But it was on the pitch where Tente Sánchez had made a name for himself and had worn an iconic captain armband. As he said, playing at Barça during eleven seasons “is not achieved only by running”.