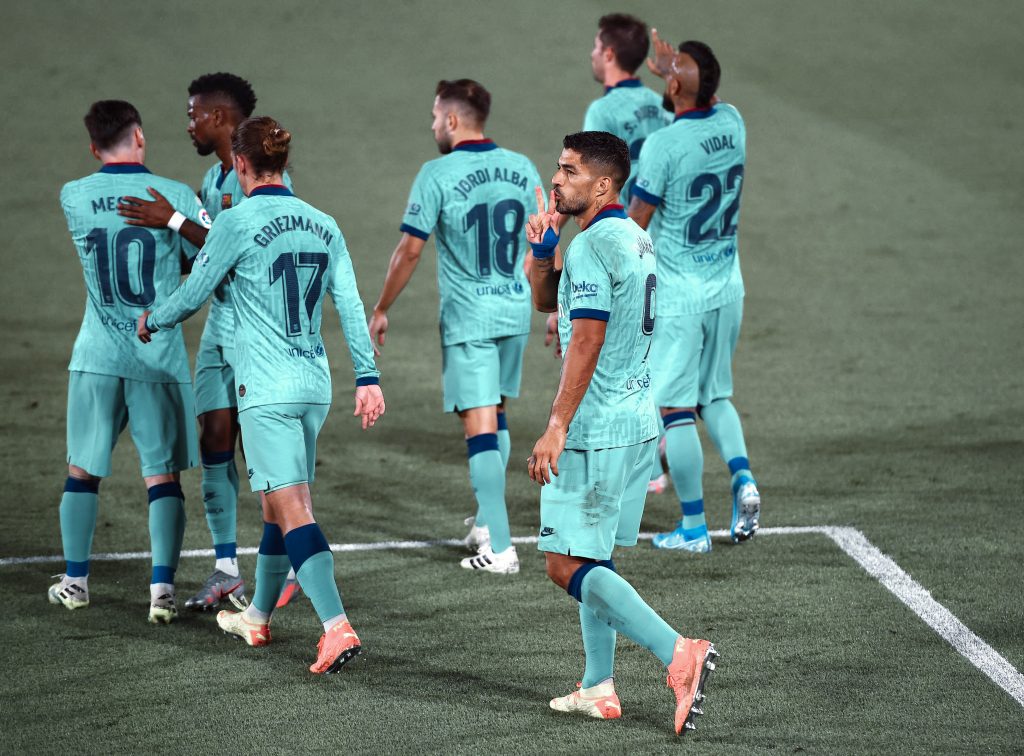 As Barcelona won against Villarreal in a new and exciting style in La Liga, this tactical analysis will provide a deeper look at this matchup.

As we reach matchday 34, with only four games left the final table is starting to shape up. With the La Liga title race between Barcelona and Real Madrid close to concluding, the Catalans can no longer rely on their results only. They now have to rely on Real Madrid dropping points in order to win the title. For Villarreal, the chance to get a Champions League spot still remains. With Sevilla in front of them with three points more and a game in hand, the hope is still present. However, more than one loss might see them lose out on Europe completely.

With such high stakes, both teams came to the Estadio de la Cerámica ready to give their all. Find out in this tactical analysis, the tactical trends observed and how they influenced the result.

Villarreal played a compact 4–4–2 when defending. The full-backs of Barcelona were granted plenty of space. Nevertheless, when they received the ball Villarreal would immediately have the full-backs or wide midfielders pressurise them. Though this meant that the Villarreal full-backs weren’t pinned down by Barcelona’s which would have given Arturo Vidal and Sergi Roberto freedom to cause havoc with Lionel Messi behind the front two. But because Mario Gaspar and Alberto Moreno would press immediately, a quick one-two could utilise the space made behind them.

Villarreal played in a 4–3–1–2 transitioning from their 4–4–2. This helped them close down Busquets and cover more of the field while staying narrow as well

When Barcelona’s defenders or goalkeeper had the ball, Villarreal aimed to cover most of the pitch. To do this, they would shift from their usual 4–4–2 into a 4–3–1–2. This formation was formed by Zambo Anguissa moving forward from his usual midfield role. Because of this, Sergio Busquets was unable to receive the ball in his usual pivot position. The 4–3–1–2 was a smart choice by Javier Calleja as Busquets is often the heart of Barcelona’s build-ups. Marc-André ter Stegen would be forced to play more long balls due to this allowing Villarreal a chance to gain possession aerially.

As mentioned earlier, Villarreal would often have space formed behind the full-backs. Another problem in their defense was that the centre-halves were sometimes pulled away from their usual position. As we can see here, Antoine Griezmann and Luis Suárez dropping towards midfield meant the centre-backs would be in more advanced positions than the full-backs. The full-backs couldn’t afford to maintain the line as Barcelona could easily play a ball over the defence with Lionel Messi or Jordi Alba and Nélson Semedo ready to make runs.

These two images show us Antoine Griezmann and Lionel Messi’s interchanging of roles. Since both of them can play as a number 10 in a diamond, Quique Setién used it to his advantage. Having this capability is very useful. Firstly, the opposition will have to be very good at decision-making. If Messi drops back, when does the centre-half pass of the duty of marking him onto the defensive mids? Secondly, if Griezmann drops back, do Villarreal make sure he is contained or continue marking Messi with multiple players? Due to this, both Griezmann and Messi got more freedom than they would have without this interchangeability factor.

Messi’s fake runs resulted in many players being dragged out of position. This is an often overlooked aspect of the Argentine’s game.

With the space created by Messi’s run, Barcelona now had a clear shot on goal

Messi’s fake runs are always a huge threat. But with him playing behind the front two and Griezmann and him being able to interchange, they were even more of a threat. Especially in and near the box. As we see here, Messi makes a run into the box and drags away three players with him. In this process, he frees up a lot of space behind him for Suárez to cross into.

One of the problems the Villarreal backline faced was organisation in defence. With Messi and Griezmann interchanging, Leo given a free role showing up even on the left-wing along with the midfielders looking to get forward, especially Vidal, Setién made things as complex for the Villarreal defence as possible.

Defensively, Barcelona faced some problems. With Villarreal playing with two at front and Barcelona’s full-backs moving up the field the responsibilities were on Gerard Piqué and Clément Lenglet completely. If Villareal get a number 10 sort of player in the space between defence and midfield on the counter, that would mean Barcelona have numerical inferiority there. Because of this, Barça’s centre-halves would be vulnerable to a well-timed ball on the counter which was what happened here. Along with this, a good pass can find a well-times run to make the most of a two-versus-two as well.

Griezmann dropped into midfield to make the 4–3–1–2 into a 4–4–2 when defending. Barcelona didn’t let Villareal keep possession even in non-threatening areas, looking to close down passing lanes and press immediately

Playing under Atlético de Madrid’s Diego Pablo Simeone for so long has helped Antoine Griezmann develop his work rate and defensive capabilities significantly. Quique Setién uses this to his advantage very well. Apart from chasing after all second and third balls, the Frenchman also helped in the defensive formation.

Barcelona played a 4–4–2 when defending. Griezmann would drop back into midfield. As a consequence, Barça managed to not suffer from numerical inferiority. The blaugranas did not allow Villarreal to keep possession in non-threatening positions either. As we can see from the image above, Griezmann is already looking to close down one passing lane to Vicente Iborra.

The 1–4 win saw an excellent display from the Catalans. Fans could finally witness the front three playing with good chemistry, an efficient attacking display and a new system which could help the attack perform to their fullest. Villarreal just lacked possession near Barcelona’s box and there’s only so much they could do on the counter against the azulgranas‘ sustained attack.

Despite the Yellow Submarine’s efforts, Barcelona’s new system completely caught them off guard. A tough match which could have gone either way considering Villarreal’s recent form, Javier Calleja and his team must be highly disappointed with the result. For Setién and the culés, this performance was a breath of fresh air.