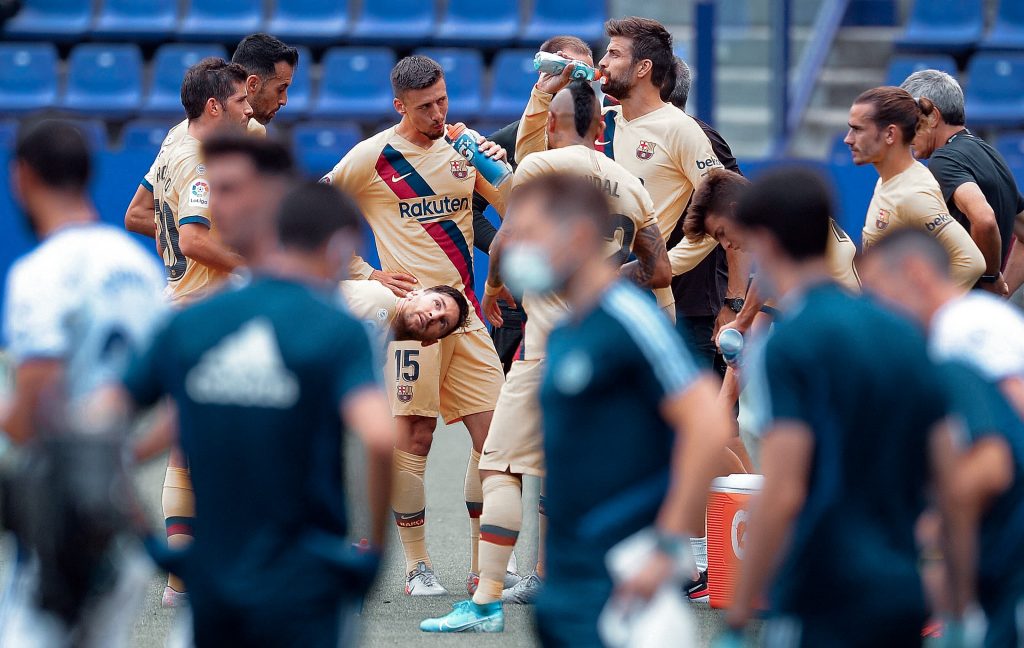 As Barcelona won against Valladolid with an unconvincing performance in La Liga, this tactical analysis will provide a deeper look at this match-up.

As La Liga nears its conclusion, Barcelona faced Real Valladolid at the José Zorrilla on Saturday. Barcelona came into the match four points behind rivals Real Madrid, whereas Valladolid were in the bottom half but a win in this match would mean they mathematically can’t be relegated this season. Their last match ended with a huge 5–1 victory for Barça on 30th October 2019.

However, since then a lot has changed, not to mention Barcelona hadn’t won two away games in a row under Quique Setién yet.They did achieve this with a 1–0 victory which means their title hopes, no matter how small, remain. The result surprisingly doesn’t reflect how the match progressed. Valladolid could have easily gotten a point or even three from this match. In this tactical analysis, we’ll take a look at the tactical trends seen throughout this matchup.

Barcelona played in a 3-5-2 with Sergio Roberto playing as a center-back.

Barcelona played a back-three with five in midfield and two players up-front. Sergi Roberto acted as a center-back and would move forward as well when Barcelona had possession in the third half. Thanks to Sergi Roberto’s versatility, he contributed significantly all over the field and was one of the best players throughout. With three defenders, Alba and Semedo acted as wing-backs like the match against Atletico. Their pace is very useful on the overlap, and especially against teams that absorb pressure like Valladolid, this was important to ensure that Barcelona have width in attack.

Apart from their advantage in terms of speed and stretching the opposition, the wing-backs were mostly unmarked and were a useful passing option throughout the match. In many situations, passing backwards would have been the usual decision but because of Alba and Semedo available on the wings, the play could be switched without moving backwards. Riqui Puig along with Alba and Vidal alongside Semedo is a very good combination at times. Throughout the match, it’s because of the pressing of Vidal and Puig and the pace of Alba and Semedo that Barcelona managed to sustain the attack.

With two players, Griezmann and Messi up-front, Griezmann was the one who would stay often more. However, he was clearly instructed to drop back to act as an option to link-up with. Many times, throughout the match, Busquets would drag his marker out of position which opened passing lanes for Griezmann.

Messi was given positional freedom as usual. The Argentine is one of the best passers in world football and with his pace not as useful as earlier, instructing him to drop into midfield allows Barcelona to get numerical superiority which in turn helps the overloads on the wings. When Griezmann and Messi both dropped back, Vidal or Semedo would move up even more. As we can see from the image 258, Semedo moved forward to compensate for Griezmann dropping back. If he didn’t compensate for the Frenchman, Valladolid could just make their formation even more compact, instruct the center-backs to press the Barcelona players and easily get possession.

Along with this, Messi, Vidal and Semedo quite often caused overloads down the right, which led to the only goal. The numerical superiority that they got was instrumental towards the result and this is one thing that Setien has got spot-on in this formation.

Riqui Puig and Arturo Vidal are useful in midfield for many reasons. One reason that they share is their pressing ability. Similar to Atletico, this was used a lot by the team. Puig would have the job of pressing the goalkeeper and defenders with Vidal pressing the midfielders more. Because of this, Jordi Masip often has to play the ball long which resulted in Barcelona getting a chance to gain possession.

Another one of Riqui Puig’s abilities, an attacking one this time, was very useful throughout. As a midfielder from La Masia, he is expected to have a great sense of positioning which he displays every time. His ability to find space is even more impressive though. As we can see in the image, Puig has found space between the lines. His ability to receive the ball in tight spaces is very useful in such scenarios. This makes him a huge threat in transitioning from defense to attack.

Puig is an expert at receiving the ball under pressure which made him a reliable option to pass for the purpose of the transitions.

Valladolid played as they did throughout the season. Absorbing pressure and countering when the opportunity presents itself. They played a 4-4-2 with the midfield transitioning between a flat midfield and a diamond. Kike acted as a number 10 when in a diamond with Fernandez at the base of midfield. Kike’s ball-carrying and dribbling was especially useful behind the two strikers.

One thing Sergio’s side did often was to press Barcelona as much as possible. When the midfielders were pressing Barcelona’s players, the Valladolid forwards would cut-off the passing lanes to Barcelona’s defenders. In case the high-pressing caught the Blaugrana midfielders off-guard, the attackers would be free to receive the ball. Valladolid employed multiple tactical aspects to promote counter-attacking football.

One of these was that the wingers were instructed to hold up the ball and wait for backup. This was of course to make sure there is no numerical inferiority that they must face. The full-backs were attacking when possible, but they also marked Barcelona’s full-backs quite well throughout. More so with Alba and Moyano. Semedo’s athleticism and the dynamism on the right helped in keeping possession.

When building up from the back, Valladolid looked to spread out the team as much as possible. Though the tried to build-up from the back, they had no problems in playing long balls into midfield. The center-halves would drift apart and start our very deep to receive the ball. This wasn’t the best of strategies since they were often forced to play inaccurate long balls with Puig’s and Griezmann’s pressing.

Valladolid’s center-backs pushed out wide and started out quite deep but this was problematic for them.

Though Valladolid looked to counter whenever possible, they preferred not to lose defensive stability. The midfielders contributed to that. The midfield diamond was very compact and it would shift along with the team. This approach was a kind of a double-edged sword. They were able to limit Barcelona through the center, however, they very frequently had to play the ball back to the defenders rather than progressively because of the defensive positioning.

Setien’s substitutions were very problematic. Especially Puig’s and Busquets’ substitutions. They were both playing extremely well and were a constant threat to the opposition with their pinpoint crossing and footballing intelligence. They ensured that Barcelona could have possession in the middle of the park regardless of the aggressive pressing. After their substitutions, the opposition was able to play much more freely. Barcelona then switched to a formation with four at the back and then again to three at the back with Firpo’s substitution. This does not reflect well upon Setien with him basically undoing his last action with that substitution.

Valladolid did show how good they are at sustaining the attack. The majority of the second half had Barcelona on the backfoot. To ensure Barcelona would not counter, Sergio instructed as many players to move forward as possible in order to pin the Barcelona players. Apart from this, they looked to stretch the Barcelona midfield since they knew that without a cohesive midfield, the Catalans would struggle.

Valladolid looked to stretch Barcelona’s midfield and pin back the full-backs. This meant Barcelona would not be able to counter easily.

The matchup between Barcelona and Valladolid showed just how quickly the tables can turn. Barcelona did manage to win, but some decisions from Setien, especially in terms of substitutions, were not the best. Valladolid were successful at playing their kind of football in the second half. Though Barcelona did manage a victory, this performance yet again poses some concerns especially with the Champions League approaching.