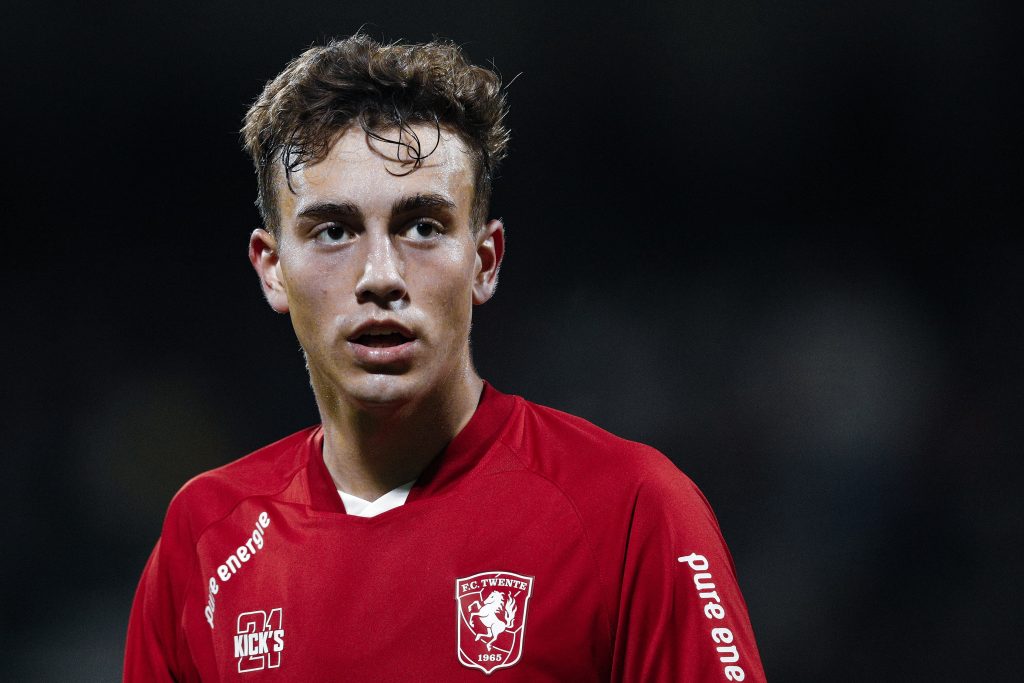 After having been touted as the heir to Sergio Busquets, this tactical analysis will look to review the evolution, characteristics and potential of current Barça loanee at Twente FC Oriol Busquets.

Oriol Busquets is a very well-known player to those following La Masía and Barcelona. His similarities to Barcelona’s first team player Sergio Busquets stretch far beyond just their last name. A defensive midfielder with passes that break the lines, stone-cold nerves, excellent positioning, legs that tackle with pinpoint accuracy with a huge range, intelligence that becomes the spine of the whole team etc. It’s eerie how many similarities these two have.

Oriol has been sent on loan to Dutch team FC Twente where under Gonzalo García, he has started playing as a centre-back rather than a defensive midfielder. However, at Barcelona he is still viewed as a player for the future. He is expected to come back to the first team next season and might either go on loan to a good team or act as a backup to Sergio Busquets. In this article, we’ll take a look at Oriol’s abilities, analyse his performances as both a defender and midfielder and go through the best next steps for him.

Who is Oriol Busquets?

Oriol Busquets Mas is a 21-year-old defensive midfielder was born in Girona, Catalonia. He joined Barcelona at the age of nine. He progressed through the ranks rapidly. His progress was rewarded by Valverde with his debut in the Copa del Rey against Real Murcia in November 2017. Since then, he alternated between the B team and the first team. Nonetheless, he played more for the B team as playtime is crucial at that age.

Oriol was unfortunately injured towards the start of February 2017 and spent the majority of the year on the sidelines. This was unfortunate and his lack of playtime was tough on him. However he returned and even scored towards the end of the same year. This injury did keep him away from training with the senior team which would have resulted in him transitioning to the first team.

Following this, Oriol joined Eredivisie side FC Twente in August 2019 in a one-year loan deal. With him set to return to Barcelona and potentially undergoing preseason with the first team, in this article we shall take a look at how he has changed at Twente and what his ideal next steps should be.

Oriol was deployed as a defensive midfielder here, acting as a pivot. Often the defenders would drift apart when the goalkeeper had possession and Oriol would drop into the space created. This helps the team play out from the back more comfortably as it offers two lateral passing options instead of one. On top of this, Busquets’ superior passing range only adds to the efficiency.

In the attack, the Catalan’s major contribution was in starting the attack and making sure the possession is contained to the opposition’s half when on the attack. The enter-backs would often drift apart allowing Oriol to drop back. From here, he acted as the starting point for the attack. His technique and awareness allowed him to play this role. As a La Masía midfielder, scanning the field before receiving the pass and shoulder-checks are natural to Busquets. He would then have the two centre-backs as passing options but most frequently he would pass the ball forwards.

One of Oriol’s strongest abilities, if not his strongest, is his ability to break the opposition’s lines. This is what makes him such a reliable option to pass to. In the example shown, we can see him with the ball near the halfway line. Here, the options are to make a laterally to the far side of the pitch, pass backwards to the defenders or to play a risky ball between the opposition lines forward.

The first choice is not ideal since two opposition players will immediately try to dispossess his teammate. Passing backwards is not a problem but Oriol’s confidence in his passing ability leads him to choose the third one. He breaks the oppositions lines passing to his teammate. In the process he eliminates four to five players. This showcases not only his technical ability, but also his confidence and awareness.

Oriol is not the best player when it comes to skilful or flair-filled dribbling. That said, he is sufficiently agile on the ball which allows him to often twist and turn with the ball to shake off his marker for a short interval in which he can play a clear pass.

Something he does very well is judge his opponent’s momentum and use it against them. This is certainly something that allowed him to adapt to the centre-back position at FC Twente. In this example, the opposition is double-teaming him with a player in front of him as well as behind him. What Oriol does is, judging the opponent’s momentum he shifts backwards a bit but when the player pressing him comes closer, Oriol nudges the ball forward and avoids being dispossessed. This is a very common skill, but Oriol’s execution is admirable is it allows him to progress freely and it showcases his composure as well.

Now, we will take a look at some examples which show why Oriol is chosen to drop between the defenders when the goalkeeper has the ball. In the first image, we see the Spaniard receiving the ball in the middle of Barça B’s half. Thanks to his excellent awareness and constant scanning of the field, Oriol sees the two opposition forwards looking to press him. But he has already angled his body and he lets the ball run past. He then passes it to his teammate towards the near side.

In these five seconds, Oriol has advanced the ball from his goalkeeper to the opposition’s half. He also eliminates four or five opposition players in this situation allowing his team to get the numerical advantage up the pitch. This is a perfect example of what makes Oriol such an incredible player. He uses the smallest of individual contributions and propels the team forward incredibly well.

It was an unexpected move by FC Twente manager Gonzalo García when Oriol was played at centre-back considering he always impressed at defensive midfield at Barcelona. Notwithstanding, now that I recall watching him play for Barcelona B, he used to perform quite a few good tackles and mostly when stopping counters. Thinking about that and his composure, it seems possible that he could adapt that to being a central defender comfortably. Now we will take a look at some examples of his defensive abilities and talk about how he has adapted at the Dutch club in his new position.

Barcelona B play sustained attacking football which can leave them vulnerable to counter-attacks. Oriol stays back and has the job of ending any counter before it gets momentum. Here, we take a look at his defensive abilities. In the first image, Oriol is advancing looking to tackle the ball-carrier. He has to take into account the passing options and plan his approach so as to cut those passing lanes and simultaneously progress.

He charges forward but angles his run as to cut out the closest passing options. It is not possible to cut out the remaining options in this case, but by cutting out the closest option, Oriol gives his teammates time to mark any other passing options. Fortunately, he ends up landing a successful tackle. This example goes to show why tackling alone isn’t enough for a great defensive player. He demonstrates positional ability, intelligence and spatial awareness in making this interception. This is one of the examples of why Oriol is an incredible defensive asset as well.

At Twente, his defensive abilities have been more composed. He demonstrates the same tackling ability that he showed earlier but here, his involvements are of many forms. His interceptions have been very helpful with 1.5 per match and has the second highest interceptions per 90 minutes at Twente. Oriol’s composure is well-developed thanks to his past as a defensive midfielder. This assists him as he often makes clearances while retaining possession. At 2.1 clearances per 90 and 88% passing accuracy, it’s safe to say he is a very reliable option even in defense. He also wins 51% of his duels which is decent for a player new to the position.

To sum it up, Oriol is a very talented player who is capable playing m=both in defense and midfield with an inclination towards the latter. For him, playtime is highly important. With Barcelona having plenty of midfield options, Oriol should only continue at Barça next season if two or more midfielders depart the club. Otherwise, the young Spaniard should look to play for a First Division team in a loan deal. His technique makes him more suitable for Spanish football which would also help him ease into Barcelona in the future. If he makes the right decisions, we could see someone truly worthy of wearing the Busquets shirt in front of the Camp Nou in the future.

• A brief overview of the remaining fixtures of Barcelona