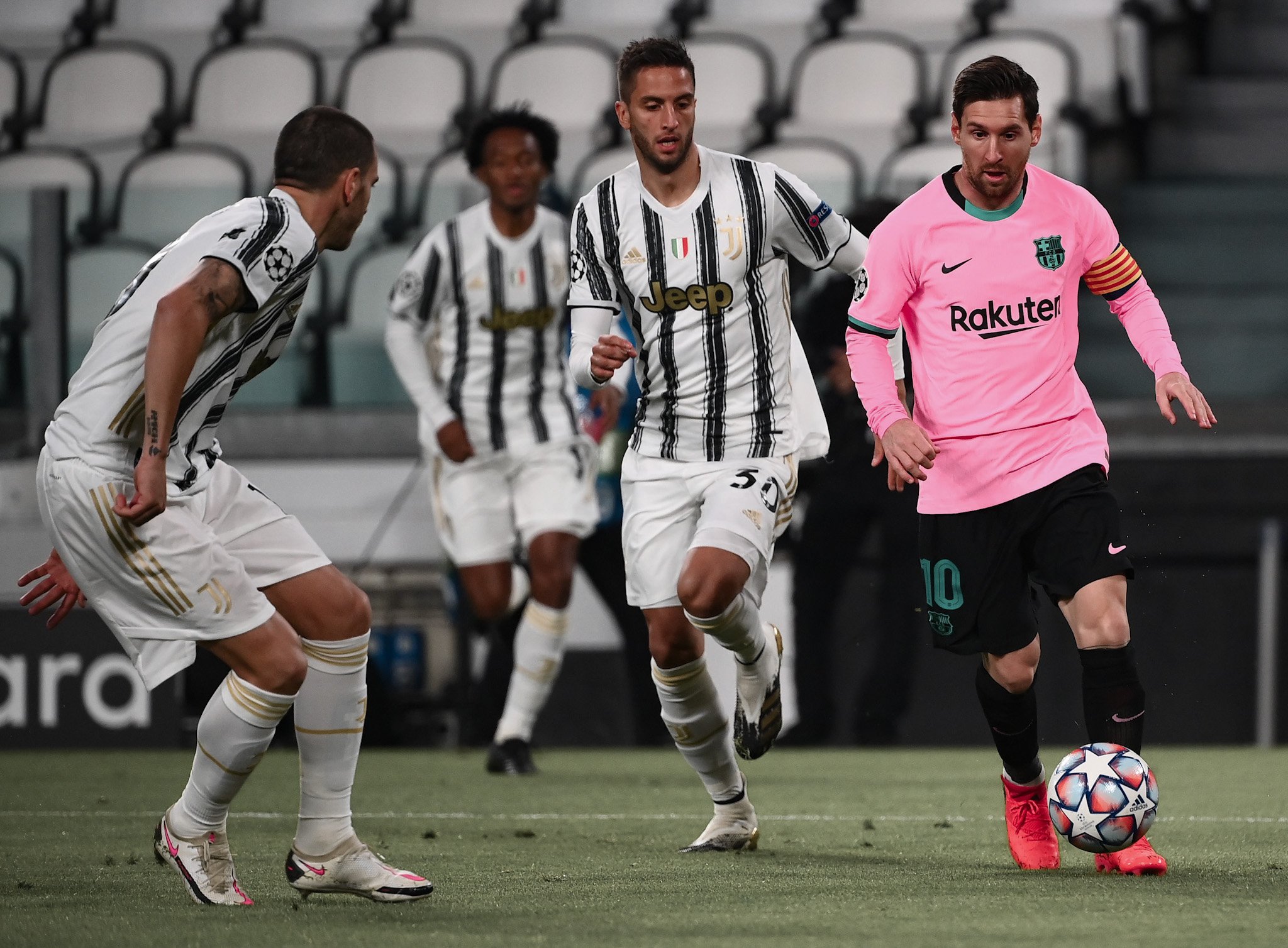 A detailed look into the game by numbers, statistics, and tactics as FC Barcelona outplayed Juventus at the Allianz Stadium in the UEFA Champions League.

Koeman’s Barcelona side started out as expected, in a 4-2-3-1. Antoine Griezmann operated as a false 9, with Lionel Messi behind him in a free role. Off-the-ball, Griezmann would have the job of pressing the opposition ball-carriers which resulted in his starting position being relatively deeper.

Barcelona’s formation always have more than a hint of asymmetry due to Messi’s free role. This resulted in different positional play for the wingers as we can see from the pass-map.

Not only did this affect the wingers, but even the full-backs had different degrees of attacking potential. Miralem Pjanic and Frenkie de Jong formed the double pivot, with the latter having the task of being the ball-carrier more often than Pjanic as always.

Juventus lined up in a 4-2-3-1, but it was more of a skewed 4-2-4 as we can see from the pass-map. Paolo Dybala played in the role we’ve seen Ramsey play under Pirlo where he has the license to contribute anywhere in the attack, as well as drop back to facilitate the build-up.

Adrien Rabiot and Rodrigo Bentancur, due to their high-energy play had the job of controlling the midfield. They would switch sides fluidly, looking to drag Barcelona’s midfielders out of position for Dybala to find space and drop back towards.

The skewed formations and the emphasis of play down one wing more than the other resulted in Juan Cuadrado playing in a much higher position than Danilo.

From the start, there was a significantly larger portion of the play on the right-wing from Juventus. Dybala was a major reason for this, as the Argentine prefers to drift wide and drive forwards with the ball. Along with Dejan Kulusevski, both of these left-footed players made it easier for Juventus to attack using the right-wing, which they made the most of as we can see from the touch-based heatmaps.

It’s also important to see how both systems affected each other. Ousmane Dembele, being more of a direct dribbler than Pedri, often received the ball higher up the field to utilize the right-wing. This meant that Sergi Roberto was unable to carry out the same marauding runs which Jordi Alba was down the left.

Pedri would tuck in on the left, which is something he often did at Las Palmas and is comfortable with, while simultaneously allowing Alba the attacking freedom he needs.

This part of Barcelona’s player dynamics meant that Juventus had to be more cautious when defending with Danilo. With Messi favouring to drift towards the right, Dembele was able to move higher- up the field sticking to the touchline.

Though Sergi Roberto was unable to overlap due to this, it brought the best out of Dembele’s penetrative attacking play. As the touch-based heatmap shows, Dembele was able to cut in often, whereas Roberto drifted towards the half-spaces to form triangles with Dembele and a midfielder or with Messi.

The following visualization shows just how much more of a direct threat Barcelona’s right-wing was than the left-wing.

This is also represented through the following visualization, which helps us understand just how much of a benefit Messi drifting towards the right was. There is a much higher number of take-ons down the wings and the half-spaces in the final-third for Barcelona and a much lower number for Juve down their left-wing.

The build-up and transitions

Juventus have adopted a unique approach to building-up which we have seen from Andrea Pirlo’s initial matches, as well as what he stated in his thesis.

Forming rhombuses or diamonds allows the team to progress in units, which maintains positional integrity while forcing the opposition to commit more players to the press. The following visualization shows just that. Barcelona’s pressurizing activities were either through the middle to prevent the midfielders from having too much possession and to force the centre-backs to pass wide.

This is where the wingers, one midfielder, and a full-back would immediately start pressing Juventus. Especially on the near side, it meant a higher concentration of pressurizing defensive activities as we can see, with less focus in the half-spaces.

Juventus would opt to build up from the back, then forming diamonds with one full-back, a centre-back, a midfielder, and one forward or Dybala who had te license to roam.

This asymmetry is something that Juventus could face a problem with in the future. The concentration of play down the right-wing is highlighted through their progressive passes, which we can see were mostly from right-to-left when transitioning from the middle-third.

Once in the final-third, there was relatively more of a balance as the same visualisation shows us.

Barcelona looked to build from the back with centre-backs Clement Lenglet and Ronald Araujo passing to the full-backs, or the pivots. To help in the build-up, Barcelona’s wingers would drop back, while staying wide. This gave the team a free man in the build-up and provide numerical superiority.

Well, that would be the case usually. However, Juventus were man-marking de Jong and Pjanic according to where the build-up was from. Simultaneously, Dybala and a winger pressed the backline while Alvaro Morata tried to aggressively pin the defenders back.

This pressing system forced Barcelona to play long-balls often, which was what Juventus wanted. As we can see from the following visualization, the majority of unsuccessful passes from the defensive third were long passes.

However, this is where Sergi Roberto was able to do his best. Forming triangles on the right with Messi and either Dembele or a midfielder, he was able to frequently dribble progressively inwards.

As Ronald Koeman himself said, Barcelona played a very complete match. They dominated almost every phase of the play, in every way possible. A brief glance at the datatable shows just that :

Barcelona were on fire from the very get-go and could have scored within a couple of minutes after a terrible pass by Merih Demiral, which led to a succession of 3 shots by Lionel Messi, Miralem Pjanic, and Antoine Griezmann respectively. Barcelona’s overall shot qualities were better, and they were fully deserving of the scoreline. Here are the shot maps and the xG flow showing the domination :

Lionel Messi had an outstanding day in office, producing several take-ons, an assist, a goal, and 5 key passes. Alba, Pjanic, and Greizmann chipped in with one key pass each.

For Juventus, the biggest threat throughout the game was Alvaro Morata. Notwithstanding the three offside goals, Morata constantly threatened with his pace and was able to find space between the lines. He also had a key pass to his game while Rabiot, Bentancur, Cuadrado, and Kulusevski had a key pass each.

Barcelona switched the ball around a lot more than usual. Against Sevilla, Getafe and Real Madrid, Barcelona were perhaps a little bit guilty of not stretching the field more frequently. Against Juventus, the switching worked according to plan.

As usual, the left side was overloaded with Alba, Pedri and de Jong and one of Messi or Griezmann. As the heatmaps show, Barcelona’s captain played mainly centrally or on the right half space. So him moving to the left to combine with Alba and Pedri meant that Juventus’ structure got dragged significantly and often left Dembele in space.

As shown in the above graphic, the buildup was quite intricate and beautiful. Barcelona built attacks intricately throughout the game and could have scored more, only to be thwarted by some desperate last-ditch defending by Leonardo Bonucci, Demiral and Danilo.

This performance sees Barcelona cement themselves at the top of their group. In what was a very convincing performance, Araujo had to be subbed-off leading to de Jong playing as a defender, as explained above. This injury, if it is long-term, would leave Barcelona with just Pique and Lenglet in defence with Samuel Umtiti already ruled out.

However, the team will be confident of victory in the home fixture on 9th December thanks to the collective fluidity and great performances from veterans and youngsters alike.