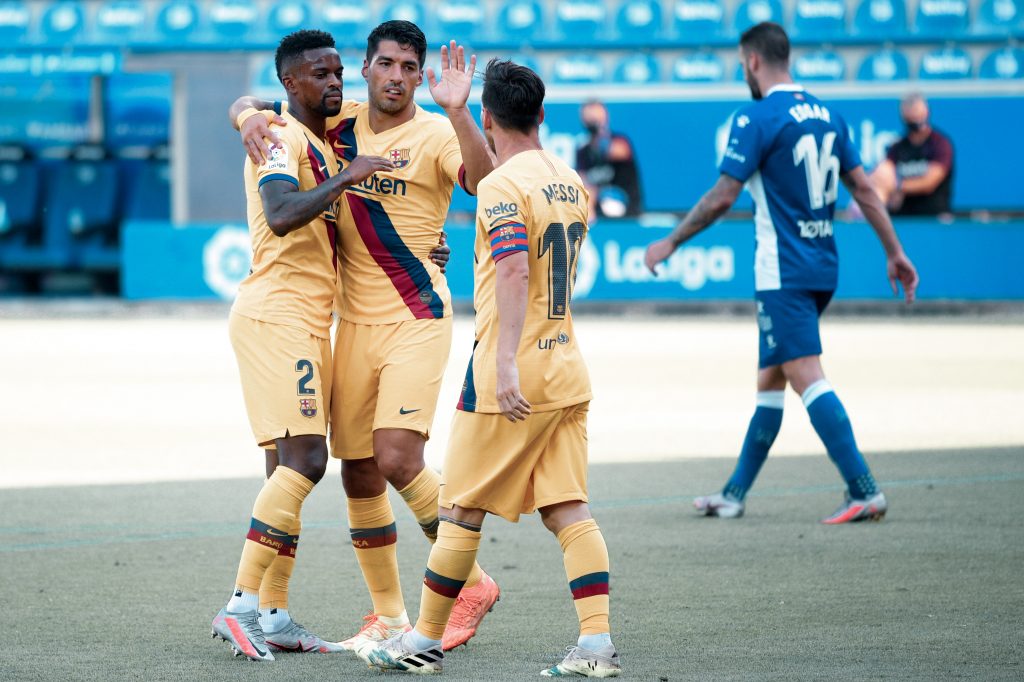 As Barcelona got back to winning ways in some style for the final game of La Liga, this tactical analysis will provide a deeper look at the 0–5 win over Deportivo Alavés.

Two teams with their fate already decided faced each other on Sunday afternoon: Barcelona and Deportivo Alavés. The blaugranas against the Babazorros. One with their position already decided and the other whose position could vary between 17 and 13 after this match. One with the frustration of their rivals’ title victory weighing on them, and the other with the relief of securing their spot in La Liga next season.

These two teams who were in very different situations met at the Estadio de Mendizorroza for the final game of their La Liga campaign. In this tactical analysis, we take a look at the tactical trends observed throughout the match.

Barcelona lined-up in a commonly used 4–3–3. With two injuries recently and three players suspended, they had only five players on the bench, out of which two were goalkeepers.

Neto got a start after a long time in goal. The central defenders had the job of playing out from the back whenever possible. Pivot Sergio Busquets would drop back to receive the ball often. The full-backs had a lot of attacking responsibility. We saw a change in tactics at the wings which will be discussed later. The midfield combined with the full-backs to provide width to the attack. Lionel Messi often dropped back and provided support. At these times, right-back Sergi Roberto would overlap often.

“Sometimes we are disorganised and more prone to concede. This is something we are working on”

Quique Setién
after the 0–5 win over Alavés

Deportivo Alavés did not shy away from attacking. They actually got quite a few good chances but were unable to make the most of those. Lisando Magallán was the defender with the most responsibility at the back. When possible, he would try to play short passes. However, this was not always possible. His long balls were decent and allowed the midfielders to get on the ball more. Magallán, though, was not not solid defensively.

The full-backs, Adrián Marín and Martín Aguirregabiria, were instructed to find space out wide. Similarly, Oliver Burke and Édgar Méndez were starting out wide as well. Nevertheless, since Alavés focused their attack through the middle, once in the opposition’s half the wide midfielders would come in narrower.

Alavés wasted no time in expressing their intentions. They didn’t shy away from attacking, which nearly gifted them with a goal early on. Attacking through the middle was a major focus, with 39% of their attacks coming from the middle. Notwithstanding, they looked to exploit the fact that Barcelona’s centre-backs are often alone at the back.

The Babazorros used this fact to sustain attacking play. When in Barcelona’s half, the two strikers along with the two wide midfielders would pin the back four of Barcelona. This meant Alavés were almost in a 4–2–4. This would usually mean that the opposition would need to rely on pace to counter. But this tactic backfired as we will see later.

Neto didn’t have much job to do, but Alavés looked threatening on a couple of transitions | Photo by Imago

Burke was a major threat down the left in terms of getting on the ball and looking to drag Barcelona’s defenders out of position. The wide midfielder was an excellent asset in attack. The strikers were very narrow, though. There was no dynamism. One thing to be noted is that centre-forward Lucas Pérez would look to press Barcelona’s pivot. Though not very effective against Sergio Busquets, this restricted the play from staying in Barcelona’s half as much as possible.

To complement this, the full-backs were always ready to press Barcelona’s players down the wings. This was an attempt to regain possession down the wings and get numerical superiority down the wings with the wide midfielders in support. When Neto had the ball, Alavés would push up very high. As they aware of Barça’s preference to play out from the back, even a small lapse of concentration on the defenders’ part can lead to a clear chance on goal.

A refreshing attack with help from the opposition

The key to Barcelona’s attack, Lionel Messi, was given a free role as usual. This allows the Argentine to utilise his ability to unlock the defence, which he showed perfectly yesterday. The change in tactics down the wing mentioned was that Ansu Fati would often come in to occupy the space between the full-back and right centre-back.

This permitted left-back Jordi Alba space to attack from, which was something we saw leading to Luis Suárez’s headed goal. Usually, even though Fati would drift in, he did the same with greater tactical sense and combined well with Alba with respect to when to get narrower or wider.

“We had a bad experience in the last game [in the 1–2 loss to Osasuna], but today we were good and effective in front of the goal”

Because of Alavés’ attacking formation, they committed a lot of players forward and had no real emphasis in midfield. This benefited Barça immensely. Riqui Puig, Sergi Roberto and Jordi Alba were very helpful in progressing the ball forwards. When they had the ball on a counter through the middle, Messi would stay on the edge of the box. There are two reasons to this. Firstly, it allowed him to supply threatening balls, and secondly, he granted space for Sergi Roberto or Arturo Vidal to make runs. Thus, Barcelona could stretch the Alavés defence fairly comfortably.

Alavés were often too lenient when marking Barcelona’s wingers and full-backs in the final third. The Alavés defenders would track back, but the wide midfielders who should be helping in defence were not up to the mark. This made it easy to find space, especially down the right. Vidal and Sergi were quite successful in utilising this and even Semedo after being subbed on scored from such a position.

Youngster Riqui Puig provided a different dimension in midfield. Due to his passing range, accuracy and progressive play the blaugranas were able to attack more freely. His pressing also suited Barcelona’s pressing, which was intense in the opposition’s half. That said, as the opposition progressed, Barça looked to regroup and maintain formation rather than press intensely.

This was a match-up where we could have seen either a very boring, dull performance from both teams, or a high-energy, passionate display. Thankfully we witnessed the latter. Alavés are left with many chances which they must have regretted not capitalising on. Their defence and midfield could do with a tactical and / or personnel upgrade.

“When we are at our best, no team can beat us”

Barcelona will definitely be happy with the result, especially since Riqui Puig and Ansu Fati’s performances present Quique Setién with the positive dilemma of selecting the starting XI against Napoli in the Champions League. With another Messi masterclass to cap off this La Liga season, Barça must take the fact that Real Madrid won the title constructively and aim to do their best next season.