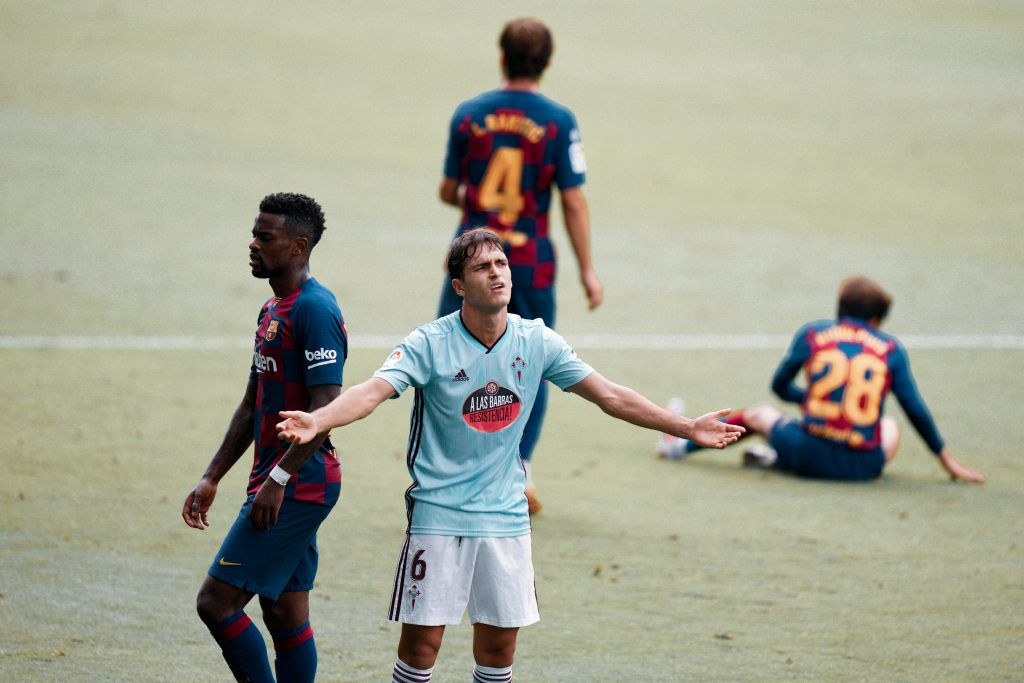 As Barcelona drew against Celta de Vigo in another disappointing result in the race for La Liga, this tactical analysis will provide a deeper look at such encounter.

Barcelona continued their race against Real Madrid for the La Liga title at Balaídos, a place where they have had problems and a Celta team playing excellent football recently. Only a win would amount to Barcelona having a good chance in the title race here. This fixture looked like a prospect for wonderful football and it did not disappoint. Find out the tactics Barcelona and Celta de Vigo followed in this concise analysis.

Quique Setién’s preferred 4–3–3 was Barcelona’s formation with an emphasis on attacking play. Instead of Sergio Busquets, Iván Rakitić was chosen due to the former being suspended. Rakitić’s added mobility was very useful as he often moved forward when Barcelona had steady possession.

When Barcelona would have five or six players attacking, Iván Rakitić would move to a right defensive midfield role to make up for the dynamism, leading to Barcelona being prone to counters down the right. On the left, Ansu Fati and Riqui Puig complemented each other’s ability, which maintained the shape and allowed defensive stability to an extent

Riqui Puig was selected as the left central midfielder and Ansu Fati as the left winger as they formed a great combination together. Not necessarily in terms of the passes between them, but Fati’s direct dribbling and Puig’s progressive play were ideal for this shape. Ansu Fati’s dribbling ability allowed him to take on the opposition full-backs. Meanwhile, Riqui could use this to find Luis Suárez’s runs behind the lines. Riqui’s mobility meant that Fati didn’t have to drop back to receive or help in the build-up.

Barcelona’s overload down the right allowed Semedo to make many runs down the wing. This balanced Vidal and Messi’s abilities perfectly. Celta’s three centre-backs meant Suárez’s runs would not lead to an effective end product

Whereas on the right wing, Arturo Vidal, Nélson Semedo and Lionel Messi provided excellent dynamism. Right-back Semedo with his athletic and pacey play, Vidal with his ability of ball retention and work rate, and the Argentine maestro with his impeccable passing, dribbling and eye for goal. This meant that Messi and Vidal could both occupy the half-spaces, with Semedo overlapping or being deployed on the right wing.

“It’s true that we would like to be more solid in many aspects. We’re attacking, we try to win, to play in the opposition’s half, and that’s what can sometimes give the opposition chances, too”

On the attack, these three had the combination of individual excellence and good teamwork thanks to their previously mentioned abilities. On the defence, Vidal or Semedo would track back depending on who could get there faster, but when Barcelona were on the attack, Rakitić would provide cover almost as a right defensive midfielder. We can observe that Barcelona had a fairly attacking yet stable structure. Their main susceptibility remained counter-attacks.

Celta have had a fluid team under Óscar Garcia. Their usual formation has three at the back, or sometimes four at the back. With three central defenders selected for this match, Jorge Sáenz and Joseph Aidoo were given cover by 28-year-old Nestor Araújo. Debutant Jacobo Gonzalez played as the left-back or left wing-back who would move up and down the wing as required and similarly Kevin Vázquez played the same role on the right.

Celta’s two strikers and attacking full-backs stretched Barcelona’s defence. This allowed them to make a lot of blindside runs behind the defence with Denis Suárez’s passing ability to help this

When Celta were on the attack, they would play a 3–5–2, which allowed Denis Suárez freedom to make full use of his creativity and be a bit fluid. On the defence, however, they would transition into a 5–3–2. Araújo would be the lynchpin in defence with Okay Yokuşlu dropping back into the defensive midfield role. Brais Méndez would defend as well almost like a 5–2–1–2 with Denis Suárez pressing Barcelona in central midfield or dropping back when suitable. Jacobo González and Kevin Vázquez would drop back to make the back three into a back five.

Denis Suárez was given freedom in midfield to use his creativity. The full-backs would push forward and the strikers provided easy one-two opportunities for Celta to progress

As we can see from Araújo’s average position above, the two other centre-backs would be in front of him. This is very effective against teams with a single striker, which Óscar must have expected from Barcelona. Due to this, Suárez’s runs behind the opposition defence could easily be picked up by the third defender. Even though he got two goals, the first was because of terrible marking and the second was because of the Uruguayan at his very best with the swivel. The fact that Celta had a three-man or five-man defence only makes this more impressive.

The substitute and ex-Barça player Rafinha Alcântara was a constant threat as along with Denis, he has attacking creativity as well. Rafinha allowed Celta to play a more attacking game with another substitute, Santi Mina, helping them achieve this. Celta transitioned into a sort of 4–3–3 with Santi Mina, Iago Aspas and Nolito forming the front three with Rafinha and Denis supplying them and Bradarić playing as a defensive midfielder. Rafinha won Celta the free-kick which Aspas converted to get Celta the point.

Celta drew the match 2–2 even though Barcelona played some of their finest football this season. Samuel Umtiti’s abysmal defending and positioning was on full display which led to a goal and multiple easy chances for Celta. Barcelona still have problems in their front three, with Messi now playing more of a creative role and having zero shots on target from his last 10+ shots. The youngsters brought in dynamism and contributed a lot but unfortunately for them, this Celta side still managed to get a point from the match.

Barcelona are now second in La Liga and Real Madrid could go on and win it even if they draw a match. The fact that la Madrid can now allow one match as a buffer and play for a draw is a huge setback for Barcelona. Now, Los Blancos must lose a game and Barcelona must win every of theirs, even against Atlético de Madrid and Villarreal, for the Catalans to win the title.