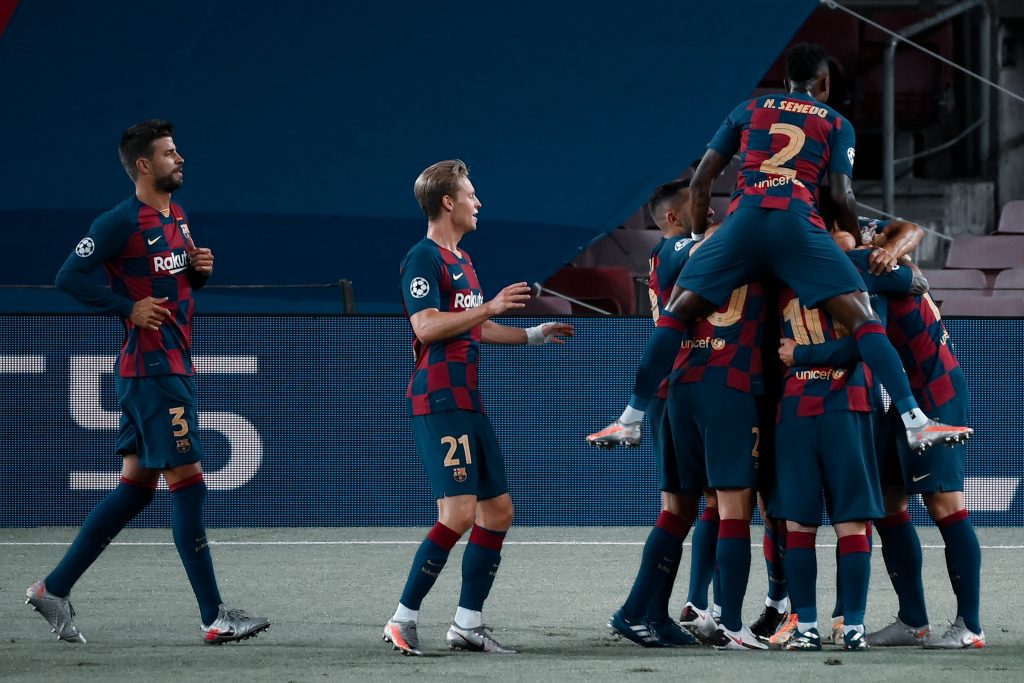 With a convincing first half and disappointing second, Barça managed to progress into the Champions League quarter-finals. This tactical analysis presents an in-depth look at the Barcelona 3–1 victory over Napoli.

With the national leagues over and the winners of La Liga, Serie A and more already decided, we are now in the midst of a unique Champions League campaign. Unique, in this case, but unfortunately since the reason was a global pandemic. However, the new format is something unique as well. After the round of 16, every match will be a single-legged tie played at a neutral venue in Portugal.

On Saturday, Quique Setién’s Barcelona and Gennaro Gattuso’s Napoli faced each other at the Camp Nou after a 1–1 draw at the San Paolo stadium. Though they are two of the best in Europe, their circumstances are polar in a way. Napoli have never been past the round of 16. Whereas, Barcelona have always progressed past the round of 16 since 2004/05.

Regardless of this, there was a lot of tension surrounding this match, especially for culés. Barça haven’t won a single trophy yet this season. Their recent performances haven’t been great and the club is at a low point. Apart from this, a loss would have most probably meant that Setién would be sacked. With such intriguing circumstances, the matchup had a lot to live up to. Find out in this tactical analysis whether or not it did live up to the expectations.

Napoli favoured using the wings to progress the ball and tried to get it centrally in the final third. José Callejón and Lorenzo Insigne are highly capable in progressing the ball. Gattuso’s system has benefitted Dries Mertens highly leading to his incredible form. Mertens plays an important part in the final third as expected. His positioning was between the centre-backs most of the time.

He kept drifting nearer to both defenders periodically, which led to Gerard Piqué and Clément Lenglet being unable to let their guard down anytime and always being wary of his blindside runs. This allowed the midfielders to stay close to Barcelona’s box when needed without being marked by more than one player.

Napoli transitioned between a 4–4–2 and a 4–3–3. The 4–4–2 was more for transitions and defence. With Callejón dropping back the wide midfielder, Napoli continued their usual practice of crowding the midfield. This made it easier for them to counter-attack quickly and use the pace and efficiency of the front-three to their benefit.

“I congratulated him for the extraordinary work he’s doing and the evolution his team have undergone. He deserves a lot of credit and they keep getting better. I’m a big admirer of his”

Barcelona played a 4–3–3 and a 4–4–2 transitioning system as well. Lionel Messi would often drop back to avoid being outnumbered in midfield. The full-backs were high up the pitch whenever possible. This aimed at stretching the opposition’s defense. Usually when Arturo Vidal plays as the midfielder on the right, he often moves forward to allow Messi to drop back. However, with Sergi Roberto in his role, Barcelona were looking to sustain numbers in midfield with Messi dropping back. This would make it easier to maintain possession in the opposition’s half.

When Messi would shift in or drop back, Roberto would leave the wing open for Nélson Semedo to overlap. On the left, though, Jordi Alba would almost always have space to overlap since Antoine Griezmann would either come in narrower when in a 4–3–3 or would be in a position near the centre when in a 4–4–2. Thanks to this, there was a better balance between the wings than usual. Luis Suárez and Griezmann would look to pin the centre-backs. With the defence being stretched by either the full-backs or wingers, Napoli had to have their midfielders drop back, but this surprisingly benefitted their transitional strategy.

Napoli looked to overload Barcelona down the wings throughout the match. Even when moving the ball from defense to midfield, Napoli’s midfielders would drop back and form triangles with the help of the full-backs and central defenders. This was more predominant in the second half. After half-time, the centre-backs came in closer but wider to receive the ball from the goalkeeper. This naturally helped the overloads since Barcelona didn’t have numerical superiority in their final third. In attack, there weren’t many overloads down the wings from Napoli, yet they still emphasised progression using the wings.

Kalidou Koulibaly moved up the field a few times, which meant the left-back wouldn’t advance as much but the midfield would have an extra option to pass back to. This wasn’t as much to help the attack as it was to maintain possession. With Koulibaly’s composure and passing, he was a good fit for recycling possession. Diego Demme was also tasked with circulating possession in midfield.

“What we have done wasn’t easy. We had to defend with intelligence”

Napoli looked to play a possession-based game, but what they lacked was sufficient pressing to retain possession. When Barcelona’s full-backs had the ball, Napoli would immediately look to close them down on the wings. This tied with their attempts to commit more players forward resulted in some good chances for the Italians in attack.

Barcelona looked to play out from the back as always. With Iván Rakitić in place of Sergio Busquets, the build-up wasn’t as effective down the middle as usual. Frenkie de Jong was crucial in the build-up with his ability to play under pressure. It does seem like playing De Jong as a false centre-back would have been much more effective. If De Jong and Sergi Roberto were man-marked, the full-backs would drop back to increase the passing options for Barcelona.

Barcelona maintained a very high line which solved the man-marking problem Napoli presented. The inclusion of Roberto helped in transitions. He would drop back often and allow Semedo to move forward and allow Rakitić and De Jong to receive the ball in threatening positions as well.

Barcelona managed to win 3–1 against a Napoli side which never really found its footing. Once again, Barcelona’s stark contrast in results at home and away was visible. Even though it was a victory, it’s very unlikely that Quique Setién would label this performance as good. A team should be greater than the sum of its parts. And that just wasn’t the case. Barely being able to maintain the majority of possession, Barcelona relied on individual ability.

Coming up against teams like Bayern next, Barcelona’s weaknesses will be completely exposed. Regardless, the individual talent the Catalans have is still too much to rule them out.