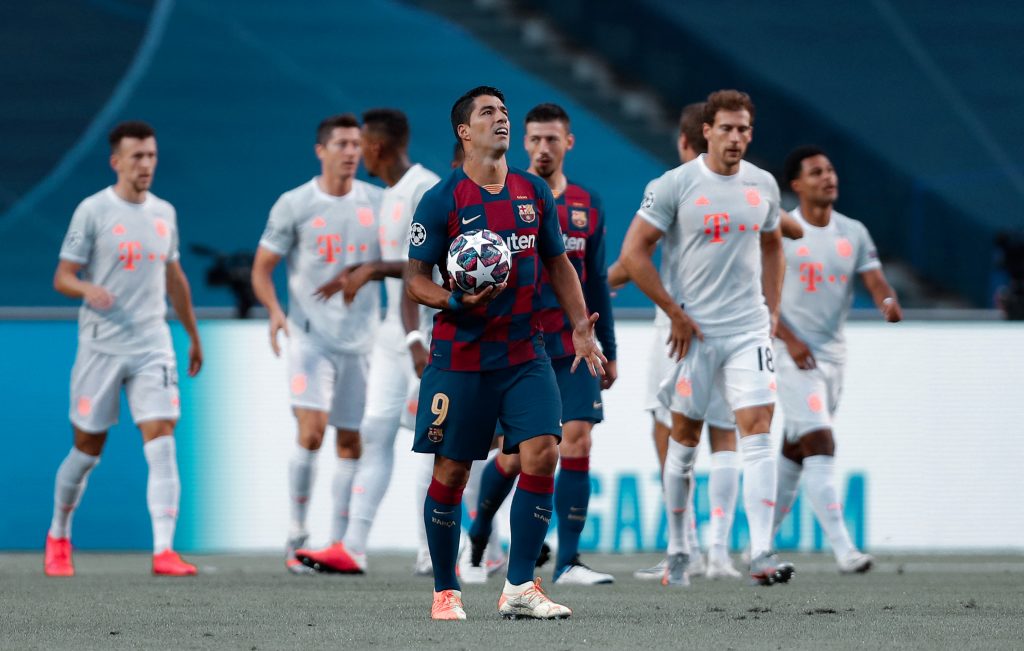 Everything went wrong, but there are no excuses. This tactical analysis presents a detailed look at the humiliating 2–8 loss from Barcelona against Bayern Munich.

In the 2019/20 UEFA Champions League, as the draw was fleshed out and it looked like Barcelona would face Bayern Munich up next, the feeling in the blaugrana camp wasn’t the best. Barça have struggled against many teams throughout this season, a lot, lot more than usual. Bayern, however, have been like a perfect machine and have been highly impressive under the new coach, Hans-Dieter Flick.

Even though not many people as neutrals expected Barcelona to go through, nobody expected the Catalans to put in what was frankly a repulsive performance. In this tactical analysis, we will analyse where exactly Barça went wrong against Bayern Munich.

The underwhelming performance by Barcelona started from the starting line-up. Quique Setién chose a diamond 4–4–2 which the manager has used before and what is a very cagey, awkward and static formation. Just Lionel Messi and Luis Suárez up front, with nobody to provide width. For Bayern, the starting line-up was the tried and tested one minus a few injuries. The differences between the two teams were apparent.

A game of high lines

The tactics adopted by both sides included in a very high defensive line. This was the core of how the game unfolded initially.

Bayern have utilised their full-backs excellently throughout this season. Joshua Kimmich came in for Benjamin Pavard at right-back with Alphonso Davies retaining his left-back spot. Kimmich provided penetrative passing and stability down the right whereas Davies provided pace and directness to the attack. Using this to their advantage, centre-backs Jérôme Boateng and David Alaba maintain a high-line and drift apart. During the build-up, Thiago Alcântara would drop back to receive and distribute the ball.

This proved to be a problem for Bayern initially, yet Barcelona found themselves suffering because of this. For Barça, quite a few times an opportunity to play the ball into the path of the runners from out wide was presented. This was because of the overloads that Messi, Nélson Semedo and Sergi Roberto attempted on the right. With Semedo and Roberto both making forward runs alternatively, Messi succeeded in putting them through on open space often. Nonetheless, Bayern adapted to this quickly, with the midfielders closing down the passing lanes when the ball was with Semedo. Davies also became much more calculated when dribbling forwards.

Thiago dropped back and preventing him from passing is a task and a half. His resistance to pressure, superb passing range and feints were utilised to their fullest and he had a very good game. Barcelona were unable to change this throughout the game. Even with the addition of Antoine Griezmann at half-time, it was too little and too late. Bayern were able to transition from defence to attack comfortably thanks to this.

For Barcelona, their high line caused all kinds of problems. Semedo and Jordi Alba are always instructed to move up the field and overlap when possible. With four midfielders, it should allow Barcelona to ideally have numerical supremacy in midfield which should make keeping possession easier. Still, Bayern’s intense pressing surprisingly resulted in many loose touches from the Catalan midfielders.

This was a major problem as Bayern immediately attacked each time they got possession in Barcelona half. The high line Barcelona played also led to Bayern’s long balls being especially effective. Robert Lewandowski was able to keep either Gerard Piqué or Clément Lenglet occupied. Thomas Müller would get into the box when the team was in the final third as well. This combined with the wingers tucking in and the full-backs delivering excellent crosses meant Barça very often allowed Bayern possession in the box.

One problem that Barcelona have faced with such an aging squad is lack of fluidity and that was apparent against the Bavarians. Bayern with their highly mobile and fluid play, and Barcelona with a stiff approach with the only fluidity being because of individual talent.

When defending, Barcelona were very ineffective. Due to the high pressure Bayern employed, the azulgranas very often lost the ball and took too much time in cutting out Bayern’s passing lanes. This was a constant problem and Bayern never looked to be having any problems in getting into the final third. Quique Setién’s men would look to press after losing the ball as well but the efficiency and hunger of the Germans were much better. Barça only succeeded in 16% of the pressures they applied. Bayern were better with more than 25% but they attempted more than 30% of the pressures Barcelona applied.

“We knew that if we put them under pressure they could make mistakes. We wanted to take advantage of that and it worked out perfectly. Barcelona have an enormous quality in attack, and you could recognise certain automatic behaviour. We had to invest a great deal of effort. It was hard work for our defence, and they coped brilliantly”

Furthermore, at the back, Barcelona’s defence lacked organisation. There was a visible chasm in communication between their defenders. Many times, Bayern had a free player not only outside the box but also in the box. Barça’s midfield was very slow in tracking back. Along with this, the midfielders would often press very inefficiently which allowed Bayern to pass the ball through the midfield quite comfortably.

All these problems together made Barça lack highly in possession. According to FBRef, Barcelona were disposed 16 times, and Bayern just two times. This stat does not include attempted dribbles, and is inclusive of tackles specifically but the huge gap is very visible.

Taking a look at the previous matches Barcelona have played since the resumption of football, there was always something lacking in every match. Regardless of the result, Barça never looked remotely like a team deserving the Champions League. The amount of problems which are not being addressed effectively has kept on increasing and increasing.

Against Hansi Flick’s wonderful Bayern side, the drab blaugrana team was on full display. These 90 minutes were a result of the culmination of the numerous problems resulting in a massive breakdown. For a club like Barcelona, this will remain in the culés’ hearts for a very long time. If Barcelona want to be as good a team or rather, club, as they should be, a major overhaul is going to be needed.