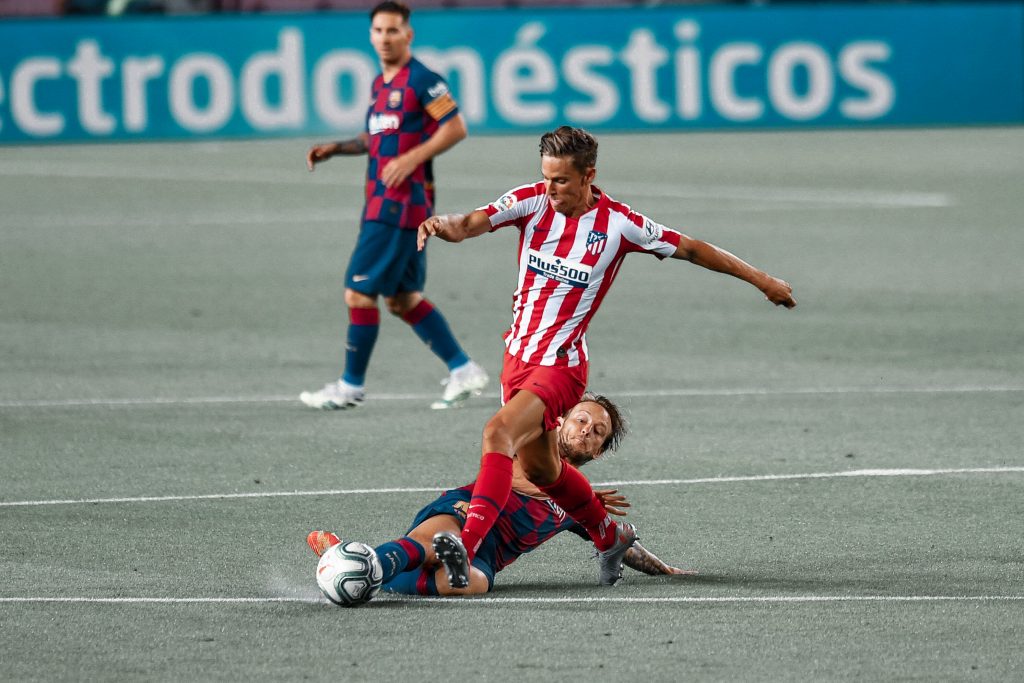 As Barcelona drew another match against Atlético de Madrid in another disappointing result in the race for La Liga, this tactical analysis will provide a deeper look at such clash.

As another matchday passes by, only five remain till La Liga 2019/20 comes to a close. Barcelona faced Atlético de Madrid on 30th June 2019. Real Madrid had won their last match leaving Barça second in the table with a deficit of two points and a disadvantage in the head-to-head goal difference as well.

The matchup at the Camp Nou ended 2–2 with both teams having to settle for a point. There were many interesting tactical decisions taken which contributed to this result. In this analysis, we will take a look at the tactical trends throughout the match, especially the new ones employed by the Catalans’ coach Quique Setién.

Atlético have had an incredible player in Marcos Llorente, especially after the resumption of football. Primarily a defensive midfielder, he has also adapted as a striker recently. This is a possible reason as to why Quique Setién chose four midfielders. If Llorente was playing as a striker in a 4–4–2, then Barcelona could have played a 4–3–3 with Arturo Vidal as the left winger as he had done a few times, or Riqui Puig as a left winger. His past experience as a false 9 could have helped in this.

Nevertheless, Setién went with a completely different formation. Barcelona played a 3–5–2, a 4–3–1–2 or 4–2–2–2 as well as a 4–3–3 throughout the match. This was the first time we saw many of these systems from the ex-Real Betis coach.

Usually, in the 4–3–3 Barcelona play in, the full-backs drift forward which allows the centre-halves to stay wider. This in turn allows Sergio Busquets to drop back between them. His passing range and accuracy is one of the main reasons this works. From here, either he or the centre-backs distribute the ball and build-up from the back. In the new system, what we see is the two midfielders, Arturo Vidal and Iván Rakitić drop back with the full-backs overlapping them.

This allows Busquets to find space to receive the pass and from then start the attack. Busquets being closer to the attackers is very useful in transitioning thanks to his awareness and decision-making.

Another trend we saw was Rakitić dropping back to form a back three. The full-backs along with the three remaining midfielders would then make it a 3–5–2. Since Simeone’s Atleti side is well-versed in any defensive attribute such as intercepting the ball fast, this additional false-centre back allowed for greater freedom in finding the passing option for the Catalans.

Rakitić would frequently drop back to make it a 3–5–2. This meant Barcelona had a 3v2 advantage against Atleti’s strikers

All of this meant that when building-up from the back, Setién’s side could be very fluid, and the transition from defense to attack would be efficient and quick.

In the 5–3–2 Atleti used when defending, Barcelona were granted space out wide. In a low-block which Atlético often resort to, if the opposition is forced wide, the easiest option for them is to cross the ball, something Barcelona don’t excel at. Atleti would have their players press Sergio Busquets intensely as he is the best option for the Catalans to play through the middle. He would then be forced to play the ball to the full-backs to back to central defenders. As we can see in the image shown, Barcelona’s players were allowed space to attack down the wings. One of  the reasons for this can be the fact that Simeone is aware of Barça’s lack of direct, dribbling players down the wings.

Atlético would be compact when defending. They would allow Barcelona to have possession in the wide areas since they would be vulnerable to attacks down the middle

Quique’s side was quite good at transitioning from attack to defense most times. Riqui Puig would receive the ball in tight spaces and immediately pass it. His movement to receive the ball would often drag a player out of position. Making use of this, the Barcelona players could then make a first-touch pass and play through the middle.

Simeone had instructed his side to be very compact when defending. Even so, when they got the chance to counter, Atleti expanded to cover a huge portion of the field.

When attacking, Atlético de Madrid would cover the field quickly. The transitions from defending to attacking were fast and efficient

As we see in the image, Atleti have stretched out to cover the field fast. Barcelona having two players up front, it was very easy for Atlético de Madrid to play out from the back. To counter this, Barcelona played in a sort of a 4–2–2–2. Riqui Puig is a fast player and his pressing intensity is incredible. This combined with Vidal’s pressing and tackling helped Barça to defend from the front. Together, they made a total of 11 recoveries.

Barça were in a sort of 4–2–2–2 when Riqui Puig and Arturo Vidal pressed. This was to avoid numerical inferiority

Yannick Ferreira Carrasco was a major threat with his pace and dribbling. Such a player suits Atleti’s counter-attacking very well. Starting out at the wing, Carrasco would dribble towards the centre. With the two strikers making runs behind the Barcelona defence, Barcelona’s centre-backs could easily be caught out. To provide reinforcements, the midfielders would drop back fast. This was a double-edged sword.

Barcelona were able to keep the balls delivered to Marcos Llorente and Diego Costa in dangerous positions to a minimum. In turn, if the locals were to win possession, they wouldn’t be able to counter fast due to the lack of players upfront.

In this new formation, to get numerical superiority in midfield, Lionel Messi would drop back often. Riqui Puig and Arturo Vidal would also come short to receive passes. Because of this clever use of players, Barcelona were able to maintain possession comfortably.

Unfortunately, this came at a cost. Luis Suárez was often all alone up-top with no players to link-up with.

Luis Suárez made runs but none of them were penetrating the opposition defence much. This was partly due to Atleti’s defence and partly due to Barcelona’s attempt to get numerical superiority in midfield

As we can see in the image, Luisito would make runs often but with basically no penetration. This was due to a few reasons. Firstly, Atlético had great organization in defence. Even with Messi and Suárez pinning the Atleti centre-backs, They still maintained a solid defense with a mid-block. The full-backs would force the Barcelona wingers wide and the midfielders would be ready to double press if someone were to receive the ball between the lines.

Even when Barcelona had Messi and Suárez pinning the centre-backs, Atlético would not be threatened because of their midblock

Secondly, Atleti’s wingers would drop back with Barcelona’s full-backs. The same tactic was used by Mallorca, however the remaining team structure meant the wingers would be pinned back and still grant possession to the full-backs. Nonetheless, Atleti would immediately press when Jordi Alba or Nélson Semedo had possession. As we see in the image, Simeone’s team used the wingers in order to make sure the opposition full-backs only got possession in less-dangerous areas. These factors meant Suárez did not have much involvement in the game.

Atlético de Madrid’s wingers would drop back with Barcelona’s full-backs. Their positioning was such that Jordi Alba and Nélson Semedo would not get the ball in threatening areas in the final-third and would be forced wide

Barcelona played with a lot of variety against Atlético de Madrid. Quique Setién made some good decisions by choosing Riqui Puig, trying out the false centre-back and such. Notwithstanding, his substitutions came very late. Simeone’s Atleti relied on indicidual brilliance a bit much during attack, however as usual were solid when defending. With this draw which was not a bad performance, Barcelona’s title hopes seem to be even less likely to be fulfilled.