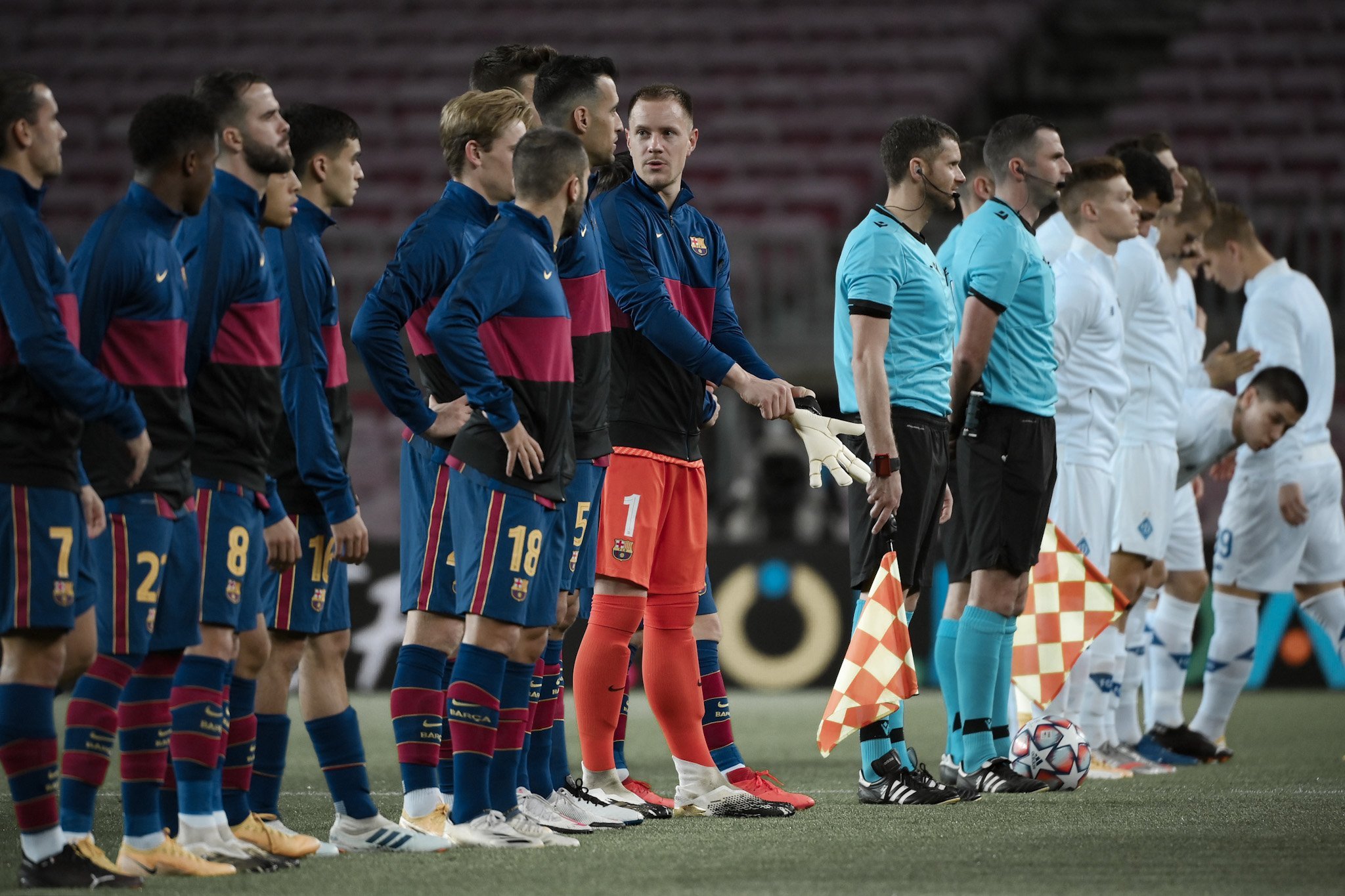 An analysis of the game by numbers, statistics, and tactics as FC Barcelona returned to winning ways against Dynamo Kyiv in the UEFA Champions League.

FC Barcelona managed to maintain a 100% record in the UEFA Champions League group stage of the 2020-21 campaign with a 2-1 victory over Dynamo Kyiv. The narrow scoreline very much reflects the close nature of the game as it unfolded.

Kyiv were hit badly by COVID-19 and had 13 first team players missing from the team. Even then, they managed to give a good account of themselves. They caused all sorts of problems for Barcelona, as Gerard Pique and coach Ronald Koeman both acknowledged later.

Barcelona went in with a nominal 4-2-3-1 yet again, with some personnel changes. Marc-André ter Stegen returned from injury for his first game of the season in goal. Clement Lenglet and Sergi Roberto were omitted from the first team. Frenkie de Jong partnered Pique in the heart of the defence, while Sergiño Dest returned as the right back.

The game, for the first time, saw a midfield duo of Sergio Busquets and Miralem Pjanic. Young Pedri played as the 10 behind Antoine Griezmann. Ansu Fati and Lionel Messi started on the right and left flank, respectively.

However, in possession, Messi rarely stayed wide. He would often drop deeper than the double pivot to facilitate buildup. Griezmann would drop back to combine or help out defensively. Pedri ventured higher up to press and combine with Fati, Dest, Messi, and Griezmann.

This was de Jong’s third game playing partially as a center back, and he played the first half splendidly. In possession, he showed his ability to carry the ball up from deep. He often pushed up to the line of the midfielders and even higher sometimes. He was the first building block in the usual left-sided overload with Fati and Jordi Alba.

The first 20 minutes saw a good amount of pressing from Barcelona. De Jong’s ball carrying abilities allowed the midfielders to stay up and push high. Off the ball scenario was curious though, as Busquets pushed incredibly high to press. It worked in the first 20 minutes, as Barcelona pressed Kyiv into corners and sidelines and forced long passes that were easily won back.

But after that, the intensity dropped. Most notably, Messi stopped pressing. Barcelona were in almost a 4-3-3 structure when pressing with Busquets, Pedri and Griezmann pushed high, Pjanic marshalling the midfield alone, and Messi and Fati on the flanks. There were loads of space for Dynamo to exploit.

Dynamo Kyiv lined up in a skewed 4-2-3-1, almost a 4-1-4-1 formation. They were mostly pegged back in their half. In possession, they countered with the pace of Gerson Rodrigues and late-arriving runners in Viktor Tsygankov and Vitaliy Buyalskiy.

The game was almost exclusively played in Kyiv’s half. Kyiv players didn’t actively press high. Instead, they tried winning the ball back deep in their half and then counter with pace. The field tilt, which measures the share of final third passes, was overwhelmingly in favour of Barcelona, as shown:

Poor finishing has been haunting Barcelona this season this game was no different. Notably, Lionel Messi went yet another game without scoring from open play. Having said that, Barcelona can consider themselves truly unlucky not to have scored at least 3 goals inside the first 20 minutes. Here are the xG flow charts and shot maps from the game:

However, after that, Kyiv snatched the initiative and creative multiple scoring opportunities. They got their reward, a few minutes after Barcelona scored their second. Although the hosts finished the game with every statistic in their favour, the visitors players can really hold their heads high with the performance. Here is the game data at a glance:

Let’s have a brief look at the goals and some shots by either team. Barcelona had a fantastic start and almost went ahead with a near-post Griezmann flick that was saved by the young goalkeeper Ruslan Neshcheret. But Barcelona won a penalty pretty soon, and Lionel Messi converted.

There were a flurry of high quality shots after that. First, Pedri struck the post from a pass by Dest. Then, Fati’s ferocious shot was palmed away by Neshcheret and Griezmann stunningly failed to score from the rebound from close range.

Neshcheret kept up his good form to deny Messi and Fati soon after, and Kyiv should be thanking the 18-year-old — their third-choice goalkeeper — for keeping the scoreline down to just a single goal deficit.

For the rest of the match, Barcelona mostly created low-quality shots from distance. Neshcheret did brilliantly to keep out a Messi freekick and then deny Sergi Roberto’s point-blank header. However, he was finally beaten by a brilliant glancing header by Pique following a cross from Fati.

Kyiv created several good opportunities, exploiting the space left in the midfield and the pace and positioning of the defence. They were finally rewarded in the 75th minute. A cross was slightly deflected by Dest’s attempt to intercept. Ter Stegen stopped the first shot that followed, but the rebound fell in the path of Tsygankov – who arrived in the box ahead of Alba – to tap in.

Barcelona went through phases of divine passing, followed by periods of uninspired passing. When they were competent, they attacked from all sorts of areas. In particular, both half-spaces were well-utilized to enter the box. Zone 14 saw a lot of activity as well, but a congested centre meant the ball only entered the penalty area once from there.

While the left side was utilized more, courtesy of Alba and Fati, Dest held his own on the right. He was practically the only offensive and the defensive cog on the right wing for the bulk of the match. He ended up with 2 key passes; Messi had 4, Fati and Alba had 3 each, Busquets had 2, Pjanic and Pedri chipped in with 1 each. Here is the key pass map :

Kyiv, on the other hand, created the bulk of the danger from wide areas exclusively, with Gerson pivoting all counter-attacks coupled with late runs from other forwards. While lacking in volume, the counters were devastating and caused a lot of trouble for Barcelona. Here are the progressive pass maps and the switch maps :

As the game data table earlier indicates, neither team pressed too intensely. PPDA is a proxy for pressing intensity – the lower the number, the better the press. Barcelona were better, with a PPDA of 16. Dynamo Kyiv didn’t want to press high and had a PPDA of 32.

However, the average numbers barely tell the story here. Here is the PPDA flow-map for Barcelona – as is shown, Barcelona didn’t press well beyond the 30th minute.

Barcelona concentrated their pressing defending activities on the flanks where they had to deal with long balls and switches constantly. They barely stopped anything high up in the central zones. Kyiv’s bad passes and Barcelona’s defensive heatmaps show the same :

For Kyiv, targeting the lone man Dest on the right was a highlight as shown below. Other than that, they were mostly forced to do a lot of deep defending to stop Barcelona. As the turnover creation maps show, they mainly created turnovers in the Dest battle or intercepted deep and countered or launched long balls.

Having discussed defence in broad strokes, let’s have a look at some individual examples of terrible defending. First up, both midfielders pushing high and wide led to enormous gaps in the midfield. In the image below, both Busquets and Pjanic moved high to press but did so poorly. Not only did they leave space behind, but also failed to win the ball back.

Shown below is yet another example of Busquets pressing high. Barcelona are structured in a 4-3-3 structure while pressing. Uncoordinated and half-hearted pressing led to a Kyiv counter, although they could not get a shot off in this particular case.

Counters attacks have been Barcelona’s Kryptonite for several seasons now, and this was on display against the Ukranian outfit as well. With full backs pushed high and a midfield leaving gaps, Kyiv countered quite frequently.

Shown below are Gerson Rodrigues’ progressive carries, and an example of a counter-attack. The counter went from dispossession near Kyiv’s penalty area to almost a 4-v-3 counter in a matter of seconds. To be noted, Rodrigues was not carrying the ball in the image shown here :

Each of the shots Kyiv took had a story of their own as well. For the first one, Vitaliy Buyalskiy was allowed to ghost into the box for a thumping header. Griezmann did not track him, and none of the defenders or midfielders were even looking at him. Ter Stegen had to be called into action to save Barcelona with a sensational save.

The second half started with Kyiv keeping possession extremely well from the kick-off. A long ball and a couple of interchanges sucked in both the centre backs and Dest on the right side of Barcelona’s half. A simple ball slipped through, a nutmeg on Alba by Tsygankov, and ter Stegen had to be called into action yet again.

Soon after, there was another counter. It started again from a fairly innocuous position with Messi losing the ball at the edge of Kyiv’s box. But Rodrigues’ powerful running and a clever pass led to the shot by Vladyslav Supryaha. Even though de Jong went toe to toe with Supryaha, he was shrugged off as the striker was able to release a shot.

Barcelona lost concentration and intensity midway through the game, which has been a recurring issue even in the past seasons. Fast and strong centre backs with elite defensive qualities are needed for a team that plays such a high line. Also, perhaps its time to shelf the 4-2-3-1/4-2-4 for a 4-3-3, at least temporarily. Koeman needs to fix the glaring issues in the team fast, or this could end up being a very long season to endure.