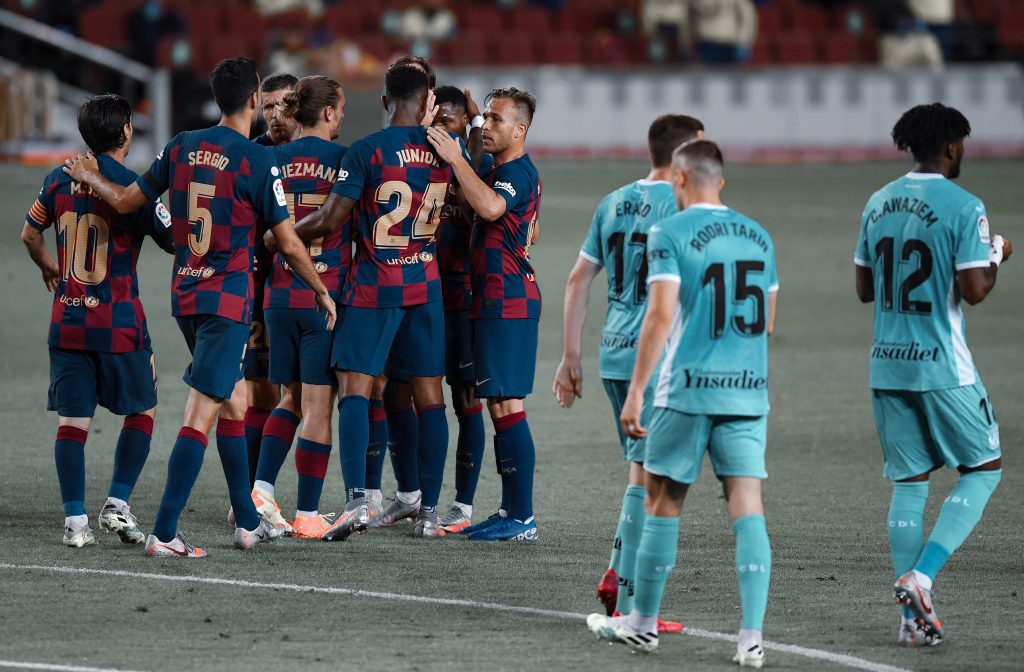 In a tricky and tedious clash with Leganés, Barcelona ended up coming up top and winning the match: this is the tactical analysis of such uneasy win.

In the second matchday in La Liga since the return of football, Barcelona faced Leganés at the Camp Nou. After a 4–0 victory against Mallorca, Barça come up against the team at the 19th position this time, Leganés. On one hand, the blaugranas had easily been better than Lega throughout the season. On the other, in their last encounter Barcelona were 1–0 down at half-time and it was only through a late Arturo Vidal goal that they won 1–2.

However, coming into yesterday’s match, Barcelona were the favoured team looking at their ability and performances throughout the campaign. Eventually, the Catalans won by 2–0, but the match was not easy for them at all. In this analysis, we will take a look at the tactical trends both sides displayed through the match and how they affected the outcome.

With the current fixture list providing around three days between two matchdays, rotations in the line-up were expected. Key players must be well-rested and ready for the intense campaign to come. This was Barcelona’s starting XI:

Junior Firpo got a chance at left-back with Jordi Alba suspended and Lenglet replaced Ronald Araújo. Frenkie de Jong and Arturo Vidal both started on the bench with Arthur Melo and Iván Rakitić coming in for them. Youngster Ansu Fati got a chance starting in the place of ex-Leganés player Martin Braithwaite. Meanwhile, Leganés line-up was as follows:

Guido Carillo and Kévin Rodriguez both were rested with Javier Eraso and Miguel Ángel Guerrero starting upfront instead. Ibrahim Amadou and Roberto Rosales were rotated too for Rodrigo Tarín and Kenneth Omeruo, plus Aitor Ruibal added for an added defensive element.

Barcelona played in a 4–3–3 with the full-backs drifting forward very frequently. Quique Setién’s side looked to attack as much as possible. A low block is one of the problems Barcelona have faced due to a lack of directness. That’s why players like Ansu Fati are helpful to take on defenders in one-on-ones.

Leganés started out in a 5–3–2 on paper but it was more of a 5–4–1 with Javier Eraso dropping back into midfield. Rodri Tarín acted as cover for the two central defenders Bustinza and Awaziem in the low block. Leganés tended to rely only on counter to attack.

Barcelona had a clear plan in mind similar to the one from their match against Mallorca. The full-backs were given a lot of responsibility, the wingers would drop back into midfield often, especially Lionel Messi, and triangles were formed between the midfielder, winger and full-back on either side.

The unique skillset of Messi caused a lot of difference between the wings. On the left, Ansu Fati would look to stretch the opposition full-back. This in turn allowed Arthur Melo to look for space in the half-spaces. Junior Firpo would try to find either of them when he had the ball. Off the ball, however, he did not make as many overlaps as Sergi Roberto on the right. This is because Messi has great passing ability along with dribbling, which allows him to drop into midfield with both the full-back and right-central midfielder in front of him. By doing this, he had the freedom to create which the little magician made the most of.

❛ It was a complicated match because the Leganés players closed the spaces and they were very defensive. We still aren’t at our best in controlling the ball and getting the ball forward ❜

Till around the thirtieth minute, Barcelona had a lot of possession but looked to be unable to find a way through the defence. Until there, some things were observable such as Leganés looking to contain with three or even four players against Messi. So, if he had the ball, their team structure around him would change. Antoine Griezmann’s runs were useful as they stretched the defence and allowed the midfielders a bit more space than usual.

These observations were used to find the solution against the Lega defence by Quique Setién. Messi henceforth played a more central role, the midfielders were getting forward between the lines and Griezmann was making a lot of runs between the centre-backs and full-backs. This gave the midfielders more space which resulted in Iván Rakitić launching a ball over the top for the French centre-forward, who couldn’t get there fast enough. If the ball were better, he would have had an open shot on goal.

Even though this solved the problem of space, Arthur Melo was still facing problems. Positionally, he was not the best. Rather than getting into good spaces and receiving he was receiving and then trying to get into good spaces.

For the overloads of full-backs, midfielders and wingers, the trigger for making runs was very clear. Whenever the winger had the ball, the midfielders would make runs around the full-backs. The advantages of this were twofold. Firstly, Barcelona’s midfielders were not getting enough space in their interior positions due to the pressing in Leganés’ low block. Secondly, with five at the back, clear through balls were not going to cut apart the visitors’ defence easily.

Without their stars, Leganés still were ambitious and enjoyed a couple of clear cut chances to score | Photo by Imago

So moving around the Leganés players and taking the right opportunity was the only option. But crosses from the sides by the midfielders had a chance of making a difference as this stretched the Leganés defence and the wingers went in narrower in such scenarios. This is what led to Junior Firpo getting space in such an advanced area and Ansu Fati then converting the chance for the first goal.

On the attack, the only options for Leganés were balls over the defence or catching Barcelona on the counter. With the loss of Martin Braithwaite to Barcelona and Youssef En-Neyseri to Sevilla, and with Óscar Rodriguez suspended, they lacked their main attacking threats. All the responsibility fell to their number 9, Guerrero. The 29-year-old Spaniard would look to hold up the ball, pass and make runs behind the defence.

Leganés would play long balls and have four or five players make attacking runs. They were unable to sustain any attacking play, though. Still, they were able to get a few good chances, all through Guerrero and all on the counter. Their defensive tactical set-up did not favour much attacking play.

Javier Aguirre’s Leganés had clear defensive tactics with one main purpose: avoid conceding and catch Barcelona on the counter. They wee aware that there was no point in trying to technically outplay the Catalans. So they must be tactically sound and communicate well. Throughout the match, they were very organised and they did not make it easy at all for their opposition.

Conscious of their limitations and situation, Leganés Mexican coach Javier Aguirre tried to make the most of his resources and tactics | Photo by Imago

In their 5–4–1 low-block, Tarín was the cover for the two central defenders. These two were the ones who would press more aggressively with Tarín for help. Usually, having two strikers to pin down the centre-backs and a number 10 to occupy the space between the lines helps. But instead of another striker, Rakitić or Arthur would look to pin the centre-backs. That said, Leganés had no qualms in letting them do that as their second defensive line was still able to make sure they didn’t get much space.

The culés were allowed possession out wide. The second defensive line of Leganés would shift according to where Barcelona had possession. They were well-coordinated and were able to keep the opposition from making any major strides in attack. But when the ball was with the midfielders, Leganés would press immediately and make sure they didn’t get much time on the ball to pick out a pass.

When Lionel Messi had the ball, Leganés would immediately have multiple players on him. This worked most of the time through the match. Due to this, the midfielders would look to make use of the space that Lega occupied before pressing onto Messi, however they were restricted only to lateral passing.

On the other side, Barcelona’s defenders didn’t have much purely defensive duties to carry out as Leganés had very brief attacks. They instead focused more on distributing the ball and carrying it forward. Clément Lenglet was impressive throughout the match. He not only blocked a goal but even his tackling and distribution was very well executed. His long-passing ability helped the locals significantly.

Gerard Piqué would look to get forward with the ball and got deep into the opposition half a few times as well. Sergio Busquets was very good in facilitating the transitions but, in terms of stopping the counters, his lack of pace was a problem as Leganés looked to use the wings predominantly.

Leganés really did their best to make things as tough for the azulgranas as possible and they deserve to be commended. Their defence was impressive. Nonetheless, they lacked severely in attack, which was understandable since they have lost their main attacking threats to other teams. Barcelona had to work hard to get the win and the goals were due to individual talent and perseverance. Though this was far from an ideal performance, such victories are very important for teams that aspire to win the league. Barcelona now face Sevilla next whereas Leganés will meet with relegation-battling Mallorca. Two key fixtures.

• Barcelona vs Leganés: Rotations that worked and those that didn’t