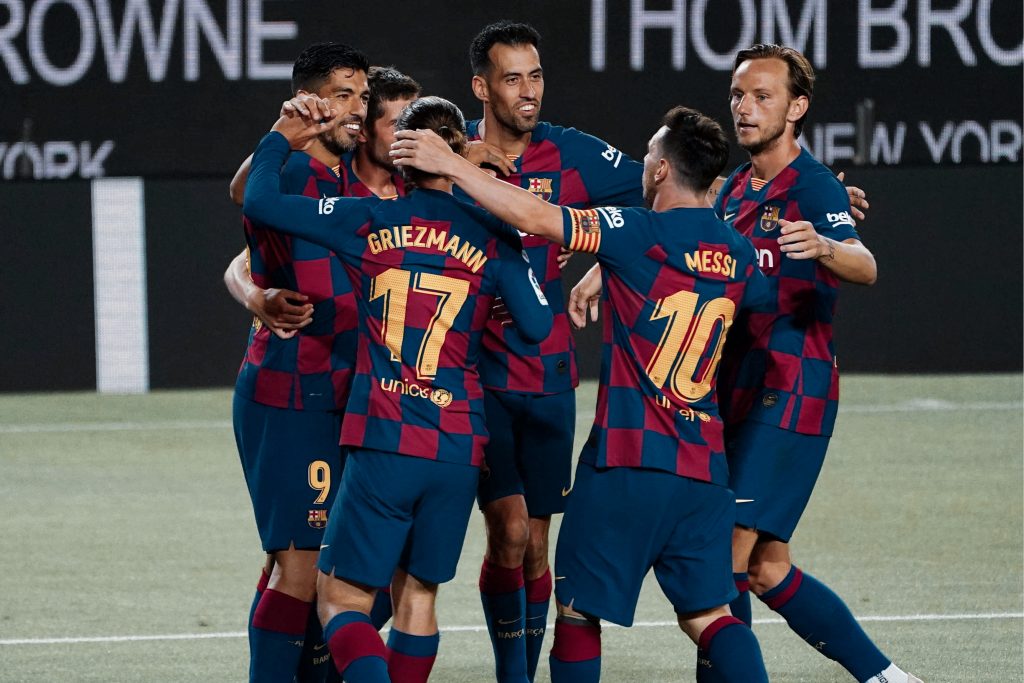 As Barcelona won against Espanyol in a new yet problematic style in La Liga, this tactical analysis will provide a deeper look at this match-up.

The 172nd Derbi Barceloní took place at the Camp Nou yesterday on the 8th of July 2020. With Barcelona in second place in La Liga and their rivals Espanyol rock-bottom in the table at twentieth, the winners were widely expected to be Barcelona. Especially with their form at the Camp Nou, Espanyol would really need a miracle to beat the Catalans.

If Espanyol didn’t win this match, even a draw would be enough to confirm their relegation. Espanyol have had a lot of problems this season. With manager Rubi and star striker Borja Iglesias leaving for Real Betis, the Periquitos‘ decline started early on. Now, after three managerial changes, Espanyol find themselves at the bottom of La Liga and confirmed for relegation.

In the derby on Wednesday, Barcelona managed to win 1–0 thanks to a goal by Luis Suárez. Surprisingly, the match was quite close. In this deep analysis of the Barcelona versus Espanyol, we will take a look at the tactical trends seen throughout the match.

A defence deserving of more

As we can see in the image, Espanyol maintained a compact three in midfield with one player, usually Adrián Embarba looking to press the player with the ball.

This allowed the visitors’ back five to cover the entire width of the field. Full-backs Jordi Alba and Nélson Semedo are always an integral part of Barcelona’s team with their overlaps. To avoid this, playing five at the back is certainly helpful. Dídac Vilà and Víctor Gómez could mark the full-backs if they advanced, with the defence still remaining stable. In a back four, Barcelona could have caused overloads down the wings more often.

Though Espanyol’s midfield three would act as a compact unit, they were instructed to man-mark each Barcelona midfielder in the diamond that the Catalans played. As we can see from the image, above, Embarba joined the midfield so that the four could tightly mark Barcelona’s midfield. Both this and the compact three were clearly aimed towards making sure Barcelona were unable to play through the middle. This attempt was quite successful. From the image below, we can see that the majority of Barcelona’s attacks were from out wide.

Barça coach Quique Setién went with the new formation he had been using recently: 4–4–2 diamond or 4–3–1–2. This greatly succeeded against Villareal. However, against a team like Espanyol where a low block was expected, many people were unsure whether or not it would work. Unfortunately, as many expected, it was not up to the mark. Barcelona were unable to be penetrative against a low block. The substitution of Ansu Fati at half-time could have helped in this. Unfortunately, the youngster was immediately sent off when VAR recommended a red card.

Barcelona played in a 4–4–2 diamond with Messi acting as the number 10, from where he could make the most of his ball-playing abilities

In the 4–4–2 diamond, Lionel Messi acted as the number 10 with Luis Suárez and Antoine Griezmann up top. A few times, the Argentine dropped back as much as the defenders to receive the ball. He was clearly given a free role to make the most of his abilities. Leo’s creative abilities are very beneficial to the team in such positions. We saw this against Villareal and a few previous matches clearly. Unfortunately, against the offside trap that Espanyol played along with their highly defensive system, there weren’t enough chances for the Barcelona forwards to capitalise on.

Luis Suárez read the play very well and was aware of where the ball would end up. His movement was aimed towards reaching that point

Though on the ball Luis Suárez was quite disappointing, his off-the-ball movement made the difference. As we see in this image, the Uruguayan read the game perfectly. Antoine Griezmann’s pass to Messi was already underway and Suárez knew that Messi would play it to him next. Hence, his run was already in expectation of where the ball would end up, leading to a goal.

Though unrefined on the ball, Luis Suárez’s off-ball movement was causing small problems in the Espanyol defence. With Ansu Fati and Riqui Puig, this could have been the key to unlocking the opposing structure

As we can see in the example above, Suárez’s runs behind the defence were enough to cause small problems within the offside trap. With a player like Ansu Fati on the left wing, Suárez and he could have probably caused a lot of problems for Espanyol. Combined with the direct passing and superb vision of players like Riqui Puig, could this have been the key towards Barcelona’s win? It will remain an unknown.

Barcelona were mostly caught on the counter. Barcelona played a dangerously high line. Though Gerard Piqué and Clément Lenglet don’t lack pace, they aren’t especially fast either. Coming up against a team of high calibre, this will be a huge weakness. The fact that we have seen this high line so often and that there hasn’t been a clear alternative is very concerning. Thus, it is no surprise that Barça were very vulnerable to long balls from the opposition. As we can see in the following instance, often Piqué and Lenglet were the only ones defending.

Often, Gerard Piqué and Clément Lenglet were the only defenders in their own half. Playing this high line, Barcelona were vulnerable to long balls and counter-attacks

Even though Sergio Busquets provided cover, his skills are inclined towards positioning and intercepting cleverly.

Against Raúl de Tomas and Adrián Embarba, Piqué and Lenglet were the only ones who were capable of working against the pace from the attackers, and the long balls from Espanyol caught them out a few times. In recent weeks, Barcelona’s defence has looked shaky, to say the least. There hasn’t been a proper plan which works, rather improvisation and individual talent. This has however brought to light just how good Clément Lenglet is.

Besides, Antoine Griezmann has the ability to work hard to retain possession and also tackle fairly well thanks to his experience under Atlético de Madrid’s Diego Simeone. His work rate complements this as well. To use this to Barcelona’s advantage, Setien’s side transitioned into a 4–4–2 when defending with Griezmann dropping into midfield. Not only does this improve the defensive stability, but it also makes the transition into attack easier with Messi and Griezmann’s interchangeable roles.

What made the difference?

In the end, Barcelona’s exceptional quality in the box awarded them with a goal in the end, which saw them win this fixture 1–0. Espanyol played admirably, but it was too late for them. This display wasn’t deserving of relegation, but their performances throughout the season dug this hole for themselves.

This match could have easily gone Espanyol’s way. For them, the next steps are to make huge changes within the club and immediately start preparing to get promotion next season. For Barcelona, there are still a lot of problems. Will this defence sustain the onslaught of a higher-caliber team in the Champions League? Will Quique Setién’s next gameplans be adaptive according to the their previous struggles, which we saw this time? How can this team overturn a low block?

Unfortunately, regardless of the results, things don’t look good for the blaugranas if they are to remain like this, but there’s still a lot to work on for Barcelona.