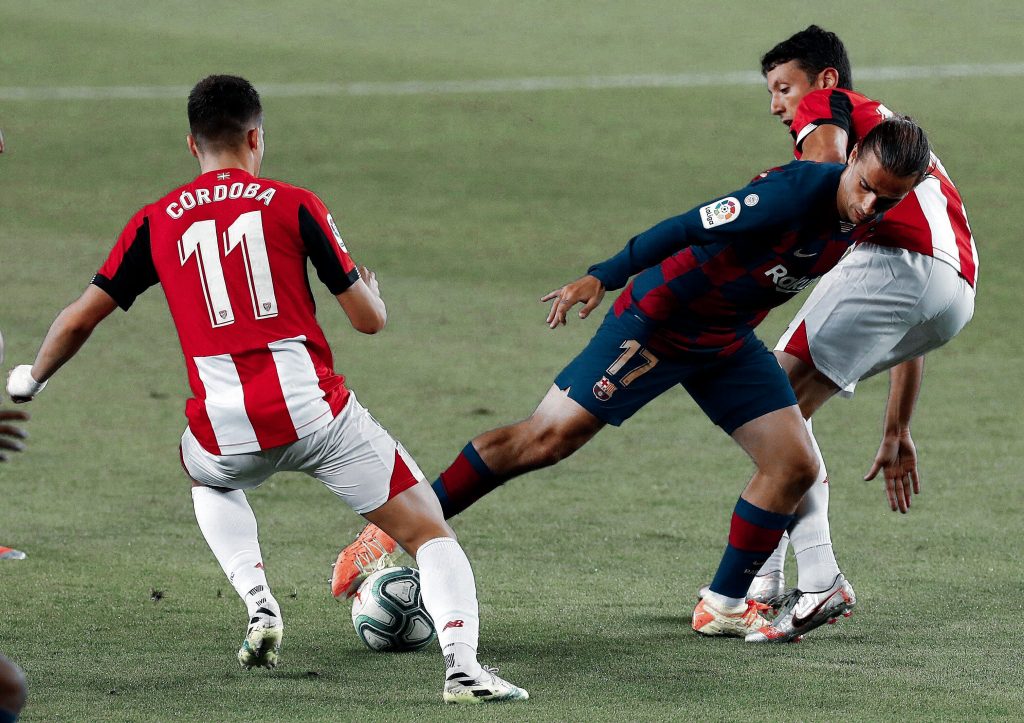 As Barcelona needed their substitutes to get an indispensable win against Athletic Club de Bilbao, this tactical analysis will provide a deeper look at such tight victory.

Barça’s goalless draw with Sevilla on Friday, and Real Madrid’s 1–2 win over Real Sociedad on Sunday, saw Los Blancos climb to the top of the La Liga table on head-to-head goal difference. For Barcelona, the La Liga title was no longer dependent on their results solely. They now have to hope Madrid drop points and they themselves don’t in order to win the league.

The match against Athletic Club de Bilbao was hence a must-win. In a game where the substitutes made the real difference and some problems were still not fixed, the Catalans won 1–0. Find out how the Barcelona beat a dogged Athletic Club set-up in this tactical analysis.

Quique Setién’s Barcelona lined up in their preferred 4–3–3. With two changes from their previous encounter with Sevilla, Martin Braithwaite made way for Frenchman Antoine Griezmann alongside Lionel Messi and Luis Suárez in attack, while Iván Rakitić was benched for Arthur Melo. The midfield of Sergio Busquets, Arthur and Arturo Vidal was chosen with Frenkie de Jong out injured. Sergi Roberto sustained an injury as well leading to Nélson Semedo being the only choice at right-back. In defence, Gerard Piqué and Clément Lenglet played centrally with Jordi Alba down the left.

Gaizka Garitano’s Athletic side lined up in a 4–2–3–1. The lone striker upfront, Iñaki Williams, had youngster Oihan Sancet as the attacking midfielder behind him. Iñigo Córdoba and Iñigo Lekue played as the wide midfielders with Mikel Vesga and Unai López centrally.

In defence, Yuri Berchiche was out suspended, which meant Mikel Balenziaga was the left-back. Along with him, the left central-defender Yeray Álvarez was tasked with making sure Leo Messi didn’t get his 700th goal. The right side of defence was composed of youngster Unai Núñez and captain Óscar de Marcos.

Barcelona‘s formation was quite fluid. The two central midfielders, Arturo Vidal and Arthur were moving into space as and when it popped up. Often even making forward runs off the ball, they were given a certain amount of freedom. Antoine Griezmann’s dropping back to receive the ball and link-up play was helpful in the build-up. This also created pockets of space behind him. Messi, of course, dropped into midfield to orchestrate play frequently. The full-backs often made forward runs.

There was a lot of dynamism and even some fluidity but none of it was efficient. Griezmann still hasn’t exactly found his bearings with Messi and him. His link-up play was helpful, but in the final third or in front of goal, where it mattered, Barcelona couldn’t rely on him. There were some passages of play which were very progressive but the Frenchman still doesn’t look in sync with is teammates. He had 61 touches from which he managed 35 passes with a 76.1% success rate, lost possession 14 times. Playing 65 minutes, he had only one shot and 0.06 xG and an xA of 0.

Arthur looked to get into positions where he could receive the ball often. He also tried to make forward passes whenever possible. But he lacked the killer pass. The Brazilian aimed to get forward with the ball but his lack of directness often meant he went forward a few steps and then laterally. Against a team like Athletic, who when defending played with two lines of four, Arthur and Griezmann linking up would have helped a lot.

But, instead, Arthur looked to lack creativity though he has the talent. On the other side, Vidal was playing much further up the field with Messi and him switching often. Arthur had to stick to his position and he was unable to have much influence.

Barcelona’s front three all tend to drift towards the middle, which causes a narrow formation

The front three have lacked width often. Griezmann, with his previous experiences, tends to drift towards the centre, similar to Messi. This does give the midfielders more space to move up the field but the lack of width is something that affects the directness as well. With players like Ansu Fati, the opposition defense is stretched and it also gives the midfielders a chance to thread a ball through.

Messi did not have the best game either but his dribbling and constant threat was a huge help to Vidal to get space on the right and for Nélson Semedo to overlap. Messi completed ten dribbles, the most on the pitch with the second being Gerard Piqué and Griezmann at two.

Another problem Barcelona faced in the final third was lack of Chemistry in the front three. Luis Suárez was unable to make an impact and with Messi passing the ball to him a lot of times, it’s no surprise he was dispossessed 13 times. The Uruguayan had a passing accuracy of less than 70%, which is again expected since many times his passes were out of sync with the others.

Throughout the clash, Athletic Club youngster Oihan Sancet was a threat for the blaugranas. For Barcelona, substitutes Riqui Puig and Ansu Fati added a whole another dimension which we will discuss later.

Technically, Sancet could have done much better with a 61% passing accuracy. However, he won 7 out of 9 ground duels, was fouled thrice and made 4 tackles. His mindset was excellent, his confidence visible all the time. Out of the 13 passes he attempted, 11 were forward passes. Athletic relied heavily on him connecting with the wide-midfielders on the counter. When they were on the attack, the visitors were in a 4–2–3–1. Most of their attacks were down the right.

Iñaki Williams was unable to get behind or dribble past the defense with Piqué and Lenglet positionally being excellent. Hence, he looked to bring his teammates into the attack by holding up the ball. Sergio Busquets had a tough job with Williams and Sancet both being threats, but the Spanish defensive mid was able to contain Sancet as much as possible and was always there to recycle possession in the first and second thirds of the field.

Willaims, playing as the striker, was aerially excellent winning three duels. In the final third, he was not very effective unfortunately. Barcelona’s full-backs fell back in time, which meant the Basques did not have pure counter-attacking chances. They would often start the counter attack but would hardly ever have numerical superiority in or near Barcelona’s box. The Catalan defense was one of the plus points helping Marc-André ter Stegen get a fifth straight clean sheet.

Substitutions to unlock the match

On this occasion, manager Quique Setién did not shy away from bringing on the La Masía graduates Riqui Puig and Ansu Fati. These substitutions, along with Croatian midfielder Iván Rakitić, were key in Barcelona’s victory.

Barcelona’s substitution changed the nature of the match. From this xG graph we can see how their xG saw substantial improvement as the substitutes came on.

The stale and lateral play that Barcelona found themselves stuck in was due to the inefficiency in the final third and a lack of directness. Riqui Puig, known for his direct and excellent passing, was brought on in the middle of the second half. He arguably changed the game. He replaced Arthur in midfield. With this substitution Barcelona had an excellent asset in transitions. Puig’s line-breaking passes were very impressive.

Playing 34 minutes, he had a passing accuracy of 84.4%. With 1 key pass and 100% passing accuracy in long balls and crosses, this forward passing was essential for Barcelona to dominate the attack in the final third as well. Constantly looking for the ball, finding space and with a very positive mindset, the young Spaniard added energy to the whole team.

Iván Rakitić was brought on in place of Sergio Busquets. He was playing as a pivot but he got forward at every chance. This led to him scoring the only goal of the match and giving Barça the victory. Ansu Fati’s cameo was like a spark in the dark for Barcelona’s attack. Excellent decision making, great dribbling and a fresh mindset were the things he brought to the table. The breath of fresh air these youngsters offered was very important for the local team and, more importantly, the culés.

Barcelona still have problems in the final third. The lack of coordination is a serious problem which has to be solved as soon as possible. This victory was nowhere near an ideal performance and Athletic could have even managed to get three points easily instead. Coming up against Celta de Vigo next, Barcelona have that match to improve their performance but, after that, it’s the Catalans against Diego Simeone’s Atlético de Madrid.

This fixture is going to be a hugely important match for the title race, as good as a decider if Real Madrid don’t lose tonight against Mallorca, who are in the relegation zone. The excellent defence and the individual talent of a few players saw Barça beat the Basque side last night, but the azulgranas are not a team that looks like it is greater than the sum of its part, something that the champions of the league must be.