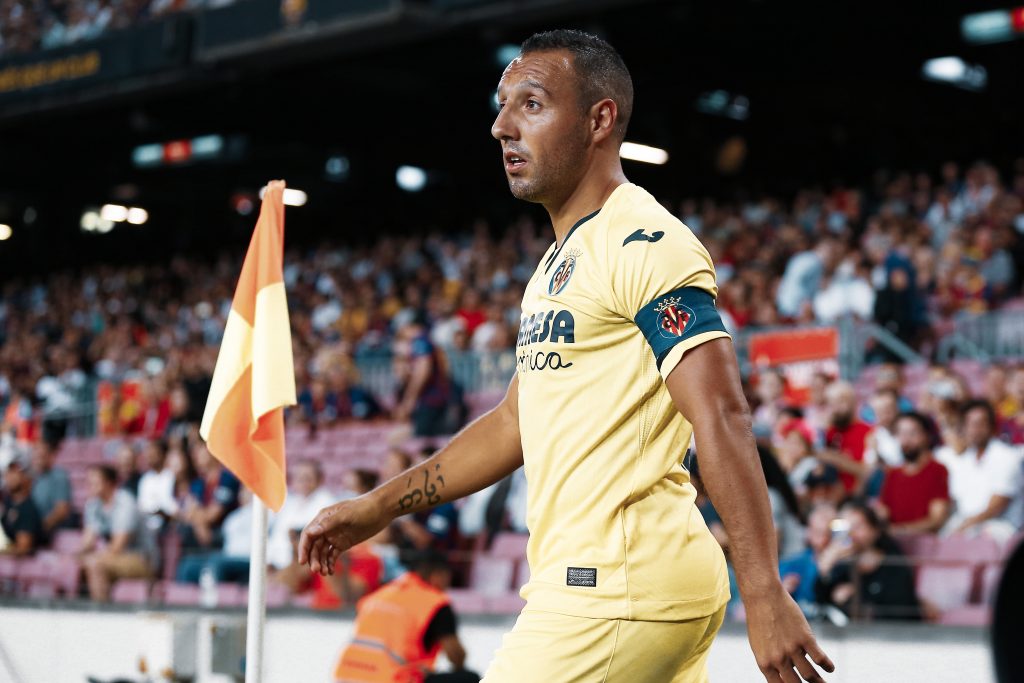 Barcelona have fallen off in their quest to retain the league title. After consecutive 2–2 stalemates with Celta de Vigo and Atlético de Madrid, they see themselves four points behind the top spot. With a tricky trip to high-flying Villarreal, the scope for dropping more points is high. And thus, this tactical analysis will provide insight into the Catalans’ upcoming opposition Villarreal.

As much as one may deny, La Liga seems to be heading in favour of Real Madrid. Barcelona have been way too inconsistent, drawing three games since the restart. On the other hand, their rivals have won every single match since football resumed. With a complete lack of game-management from Quique Setién’s men, a clash with Javier Calleja’s in-form Villarreal appears to come at the wrong time.

The Yellow Submarines are pushing for a place in next season’s Champions League. Sitting at fifth place and only three points behind Sevilla at fourth, there’s no reason why they can’t qualify for Europe’s biggest competition. They have had an exceptional restart, drawing only one game with Sevilla while winning the remaining five. Form wise, they are the second-best team in the league since football returned.

Villarreal have always been a challenging side to travel to. With the Estadio de la Cerámica being one of the toughest trips for any team in Spain, Barça has a tricky visit tomorrow. 42-year-old Javier Calleja took over as Villarreal’s coach in 2019, and it’s safe to say that he has done an absolutely outstanding job. He rose up the coaching ranks, managing the club’s youth side from 2012 to 2017 before taking over the reserve team.

In September 2017, he was named as the first team’s interim head coach after the club fired Fran Escribá. He led them to a fifth-place finish. However, he received the boot in December 2018, in the following season, as his side sat only three points above the relegation zone. Once again, within a month, the club sacked Luis García in January 2019 and reinstated Calleja as the head coach.

This term, Javier Calleja has been able to take Villarreal back to where it belongs | Photo by AFP7 via Imago

Now into his second stint as the Yellow Submarine’s manager, he has been doing really well with an enticing squad that combines youth with experience. A team that has a balance in both defensive and attacking profiles, it’s no surprise that Villarreal is pushing for that final Champions League spot. Barça should prepare themselves for a complicated clash with el Submarino Amarillo.

The two sides were involved in an extremely thrilling 4–4 draw the last time Barcelona visited them. Even if both teams are unlikely to feature in a similar high-scoring game, their respective attacks are skilled enough to exploit the opposition’s defensive fragilities.

Clearly, Villarreal is a side that has always flirted with the top four. With a couple of near misses in the last few seasons, they have established themselves as an outside favourite for Champions League football. Aside from the previous campaign that was far below their capabilities, they have always been a consistent side that finished in the top six.

Currently, they are likely to return to the position they belong to. Nevertheless, with Julen Lopetegui’s Sevilla inconsistently slipping their spot in the top four, Villarreal can pressurise and possibly leapfrog them. Scoring seven goals and conceding only twice since the restart, Javier Calleja seems to have fine-tuned his men during the break. They only conceded goals in their 2–2 draw with Sevilla, where they were ahead till the 63rd minute.

Before the break, they were on a three-match losing streak. And so, it can be said that Villarreal is one of the several sides that benefitted from the break. Calleja got a chance to regroup with his players and analyse where they were going wrong. He has shown signs of adaptiveness and is also unwilling to rotate the squad massively. It’s an implication that they have found their best XI and could hurt the Catalans with ease if they don’t turn up for the occasion.

Javier Calleja has been versatile this term, setting his team up in a variety of formations. Mostly, he tries a variation between 4–3–3 and a double pivoted 4–4–2. Still, Calleja has also fielded his team in a 4–2–3–1, 4–5–1 and 4–1–4–1. Against superior possession-based sides, he tends to pick a 4–4–2 to overload the midfield with an extra man. But against mid-table and lower sides, he gives his team more attacking freedom by fielding them in a 4–3–3.

A calculative manager is capable of shuffling around with a variety of formations depending upon the nature of the opposition. They are likely to be set-up in a 4–4–2 with Vincente Iborra and Zambo Anguissa as the double pivot. These two are highly physical midfielders who provide robustness to the midfield. With creativity coming from former Arsenal man Santi Cazorla, and pace from Moi Gómez, they can also hit teams on the break.

With 15 goals, Gerard Moreno has been La Liga’s third top goalscorer this season | Photo by AFP7 via Imago

The necessity for Quique Setién’s Barcelona to be anticipative of what’s thrown against them tomorrow is mandatory. Villarreal is a side that is capable of relinquishing possession and using Gerard Moreno and Paco Alcácer for pace and goals. On the other hand, they even have Carlos Bacca and Samuel Chukwueze to provide a different dimension of attacking options.

They are a team that’s well-equipped with different variations up top and also quality at the back. The centre-back partnership between Spanish internationals Raúl Albiol and Pau Torres provides a mix of experience and youthfulness. The latter has been fantastic this season and is also being linked with a move to Barcelona.

It’s not simple to breakdown Villarreal if they choose to close the spaces and defend compactly. Notwithstanding, they have the habit of leaking goals when the entire team goes out of shape. They tend to be victims of the domino effect at times, as they go on to concede three or four goals after going behind. Barça should look to take advantage of the host’s questionable defending when they are trailing.

There’s no denying that Santi Cazorla is the club’s best player. He is capable of unlocking opposition defences with his quick feet and pinpoint vision. Even so, the player we will be looking at is Pau Torres. The 23-year-old has earned himself an astounding reputation across Europe. Aside from Barcelona, many possession-based sides are interested in acquiring the ball-playing centre-back’s services.

Pau has played 29 games this season and has rarely had a bad game. He is fundamental when Calleja chooses to play more with the ball. But before looking into how good Torres is with the ball, there’s a need to analyse his defensive contribution. He has a 66.7% ( 18 / 27 ) success rate when it comes to facing dribblers. With a judicious pressing sense, Pau doesn’t barge ahead to startle the opposition. Instead, he is calm and calculative, making him an impetuous decision-maker.

He wins most of his on-pitch battles, while his aerial presence could be better. Although not in the best shape for being a rigid defender, he is well-built to handle sturdy attackers.

Pau Torres has been a revelation for Villarreal this season | Photo by Irina R. H via Imago

His ability with the ball is exactly why several fans want to see him in blaugrana colours in the coming season. Pau has pass receiving accuracy of 98.7%, which is naturally high as he is at the back. However, it’s not as simple as one may think. As on numerous occasions, centre-backs have to deal with the opposing attacker’s press. That said, this is never a challenge for a composed defender like Torres.

He picks the right moment before advancing upfield. But, he’s not a central defender like RB Leipzig’s Dayot Upamecano, who drives forward with the ball. Instead, he smartly attempts to find the spaces left by the forwards who press Villarreal’s backline. He can also switch the side of play by pinging long balls to the portion of the pitch where the opposition is vulnerable.

Pau Torres is the right player who ticks all the boxes for the Catalans. Those who are already aware of his expertise will surely be keeping an extra eye on Pau.

Barça is in no way a team that’s looking likely to bounce back. The performances haven’t been ideal. Even if their style of play has improved, the results aren’t there to show for it. With rumours of Quique Setién’s job being on the line, there’s a pressing need for them to get a win against Villarreal. However, that will not be a simple task as they have agendas of their own.

Barcelona has slipped up on their last two away trips, drawing with Sevilla and Celta de Vigo. Anything aside from a victory would put an unassailable lead between them and Real Madrid. The fans will be hoping to see an improvement in the overall performance of all departments. Villarreal may not be the ideal side to face amidst a period where they need a confidence boost. Nonetheless, the flip side of facing a team that’s playing well will be the morale boost the players, fans, and coach gets if they beat them.

A highly entertaining game awaits both parties who are likely to share the ball equally. Considering how static the azulgranas‘ midfield has been lately, the hosts could overload the central part. By fielding an extra man in the midfield, they make it more challenging to play between the lines and move the ball up faster. All eyes will once again turn to Lionel Messi, but it’s high time that the entire XI owns up to their poor display in the recent days.

• The evident difference between Samuel Umtiti and Clément Lenglet

• The palpable decline of Luis Suárez