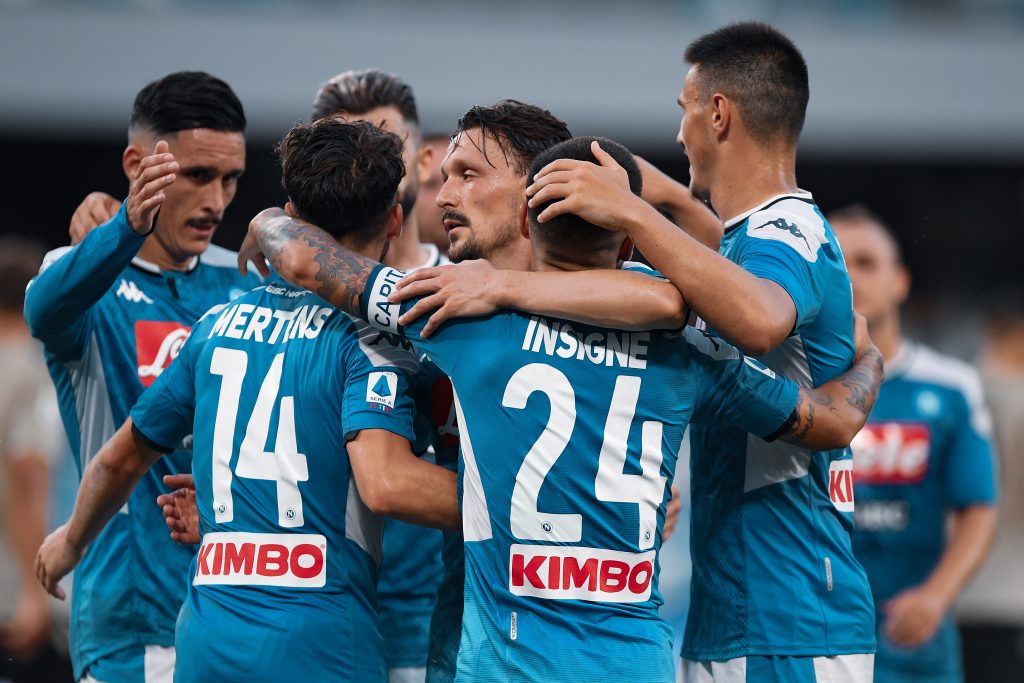 The Champions League returns to the Camp Nou for a final time this season before the competition heads to the neutral venues. Quique Setién’s Barcelona will lock horns with Gennaro Gattuso’s Napoli in what will be a clinching encounter. In this piece, we present a tactical analysis of the strengths, weaknesses and potential areas of exploit of Napoli.

Ahead of Saturday’s second leg of the Champions League round of 16, Napoli’s visit to the Camp Nou will see Quique Setién face a manager with polar opposite footballing philosophies. Possessional brilliance versus positional discipline, patient build-ups versus potent counter-attacking, Quique Setién versus Gennaro Gattuso, round two.

Albeit the massive difference in tactical approaches, all that separates the two teams is an Antoine Griezmann away goal. The hosts are aware of their lacklustre performance in the first leg that saw them bring back a 1–1 draw. Meanwhile, Gattuso knows that one goal is sufficient to kill Barça’s slender advantage.

Having sacked Carlo Ancelotti midseason due to disappointing results and a weakening relationship with the chief Aurelio De Laurentiis, the expectations were low when Gattuso took charge. Since replacing his former coach and mentor of the AC Milan days, Gennaro Gattuso had transformed Napoli with a different approach. The free-flowing attacking football brought Napoli nothing in terms of silverware under both Maurizio Sarri and Ancelotti. The players were frustrated to be left empty-handed at the end of every season.

Despite playing some of the most beautiful football in Italy, they had nothing to show for it. And this is what helped Gattuso convince the board and the players of his pragmatic approach. Indeed, Gli Azzurri’s entire philosophy wasn’t altered. However, the focus shifted from exquisite unlocking of the opposition backlines to developing an absolute defence first. With Kalidou Koulibaly as the focal point of the defence, it was astonishing to see Napoli struggle to remain resolute at the back.

Since then, Napoli’s identity has seen modification from a defensive perspective. Especially when it comes to being focused while holding the shape. The result of prioritising stability at the back saw them lift the Coppa Italia immediately after the restart of football. They faced Inter Milan in the semi-final, which was followed by a final against Juventus. Gattuso’s men were patient across both legs and frustrated Antonio Conte’s Inter. A combination of opportunistic clinical attacking and focussed defending helped them edge Inter out.

The plan versus Juventus remained the same. Maurizio Sarri’s men could have taken another extra 90 minutes past the existing 180, and they wouldn’t have broken down Napoli’s defence. Koulibaly has been unbeatable in the air, and due to that, teams struggle to play direct football when they face him. Fortunately for Barça, the focus in attack isn’t on winning aerial duals.

When Carlo Ancelotti was the manager, he played with a variety of shapes. But the one which the Italian preferred to stick with was a 4–4–2. Unfortunately for them, this shift in the formation didn’t help them as their forwards prefer to drift wide and cut inside, instead of waiting for crosses. Gattuso realised this and immediately reverted to the 4–3–3 that they thrive with. Nevertheless, despite this system being a highly attacking one at first glance, Gennaro made a tweak to it.

While building the attacks, they play in a 4–3–3 where Lorenzo Insigne and José Callejón like to drag defenders wide before playing low cutbacks to Dries Mertens. That said, the modification is more evident when they are defending without the ball. Forming two banks of four, in a 4–4–2 they ensure that the midfield is packed with an extra overload to prevent ease of flow for the opposition. At times, the midfield even becomes a five-man one, with a sole attacker waiting up top.

Once possession is regained, the defensive formation disengages back to a 4–3–3 with the ball being distributed quickly across the flanks. A majority of Napoli’s players have a relatively small frame in general. To recompense the lack of aerial presence while attacking, though, their footballers are gifted with pace, close control, and technique. The likes of Mertens and Insigne can bend the ball fantastically to find the net. Their only source of height is Arkadiusz Milik, who always delivers when Gattuso brings him on from the bench.

The gameplan for Napoli is far simpler than one may imagine. All they need is one goal, so they won’t be all over Barça’s defence. They will wait patiently to hit the Catalans at the right time. Quique Setién, on the other hand, will have to be wary of the fact that any more than one away goal by Napoli would make the task herculean. He would have to ensure that his side takes advantage of the possessional upper hand.

Napoli has a variety of quality players that Setién’s side should keep tabs on. But ultimately, the man to watch out is undoubtedly Lorenzo Insigne. Having witnessed the brilliance of one little man through Lionel Messi, Barça fans should be aware that height means nothing when feet can produce magic. There were initial fears for the Italian outfit over Lorenzo’s fitness. Nonetheless, the reports now claim that he is ready to start the game.

With 8 goals and 6 assists in the Serie A, Insigne is second in the club’s top scorers for this season domestically. While the predatory instinct of Milik has helped him score more goals, Insigne offers a lot more to the attack. He can dribble past players with ease, sometimes even taking a hit or two for the team. He is one among the several outlets for Napoli to ease off the pressure on their backline.

While he has a telepathic connection with Mertens, Lorenzo should not be let anywhere near Barcelona’s box. He can wrap his foot around the ball to curl efforts even in the acutest angles. Should Gattuso prefer to start both Insigne and Mertens, Barça will have to worry about the play within the lines. The midfield that sits behind is equally competent. Fabián Ruiz and Piotr Zieliński are fabulous and sought after by many top clubs across Europe.

The culés‘ Achilles heel is the inconsistency observed with the full-backs. Lorenzo will go head to head with Barcelona’s right-back, and irrespective of whether it’s Nélson Semedo or Sergi Roberto, the task is challenging.

Before worrying about the quarter-finals that’s most likely against Bayern Munich, Barcelona shouldn’t be overconfident on the opposition that visits them first. Indeed, the record at the Camp Nou has been spotless for the azulgranas in the Champions League. But that doesn’t mean anything as we have already seen numerous upsets in the past. Fortunately, they will be relieved to play this second-leg clash at home, which gives them the comfort factor.

Should Napoli manage to get the first goal, the entire tie opens up, and Barcelona will be on pressure. And so, they must be as strong as possible across all departments. Laziness up top and the statics of the midfield was exploited numerous times since the restart. With Messi already saying that they should raise their game to stand a chance, Setién will have to pull a rabbit out of his hat and ensure that he displays superiority over Gattuso tactically.

If Barça play to Napoli’s strengths of allowing them to absorb pressure by sitting back in a low block, the damage they cause on the counter may come too late to respond. The Champions League is finally back, and it’s all in the hands of Barcelona’s collective to ensure that they book their trip to Portugal for the rest of the knockouts.