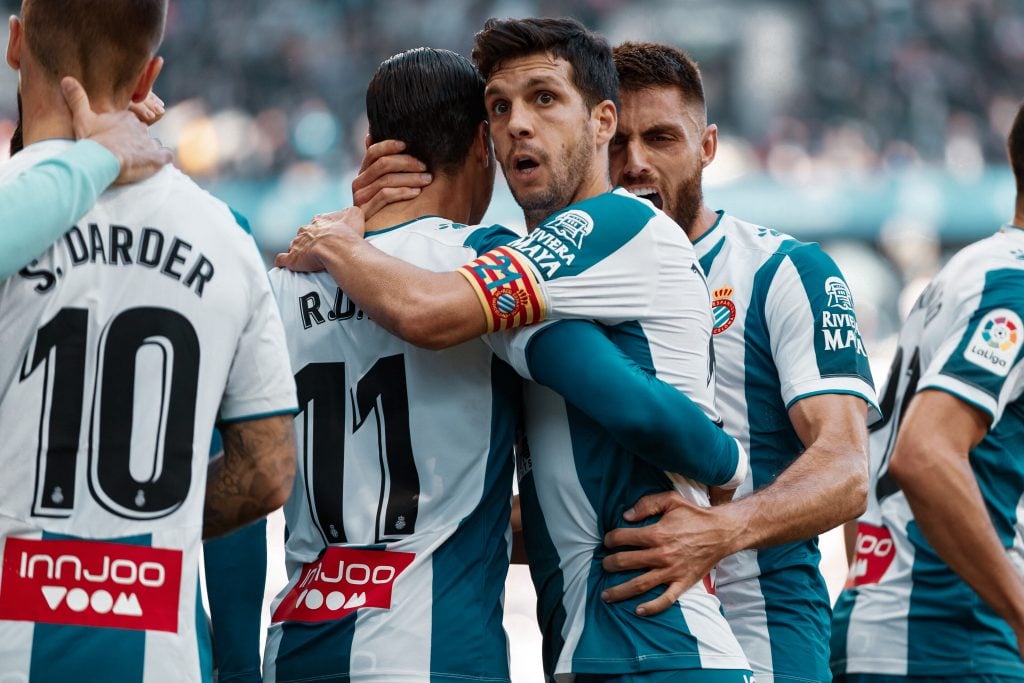 After a glamorous win against Villarreal on Sunday, Barcelona will be hosting 20th-placed Espanyol on Wednesday. Ahead of such derby, this tactical analysis will examine the strengths and weaknesses of RCD Espanyol, who would be officially relegated to the Second Division in case of defeat.

On Wednesday night, the Camp Nou will host a Catalan derby full of history and rivalry but that will take place under unusual circumstances. First, of course, due to the absence of fans, which are always invaluable in such local meetings. And second, because the two teams facing each other will have a lot of stake, yet a positive or negative result could change their situation next to nothing.

Barcelona come from beating Villarreal by 1–4 on the weekend, in what arguably was the best collective performance in the Quique Setién era. That said, the blaugranas continue to be four points behind leaders Real Madrid, who have the La Liga title within their reach. Meanwhile, RCD Espanyol are sitting in the twentieth position in the table, and they are destined to be relegated. A defeat against their city rivals Barça would officially see them drop down to the Second Division.

It has been a season to forget for RCD Espanyol. A season to forget after an unforgettable season. The 2018/19 campaign had seen Espanyol reach the European spots for the first time in twelve years, lead by a fully cohesive team with Joan Francesc Ferrer Rubi as the coach and striker Borja Iglesias as their top goalscorer. It was all joy and celebrations at Cornellà, but what would follow was disaster.

The two most important figures of such side, manager Rubi and centre-forward Borja Iglesias, left to Real Betis in the summer of 2019. Although Betis had finished lower than them in the table, the project seemed more encouraging than Espanyol’s. In spite of the on-pitch success, the institutional instability from the Periquitos became evident in the following course.

President Chen Yansheng has not been able to cope with the troubles at the club, which have provoked, among others, a sporting failure, a triple change of coaches, and the sacking of directors Roger Guasch and Óscar Perarnau. Following the exit of Rubi last summer, it was B team manager David Gallego who was appointed as his replacement. It looked promising at first, for having been at the club for many years, but two problems came together: some limitations in the squad – such as not having signed a proper forward after Borja Iglesias’ departure –, and the inability to optimise the resources in the squad.

The team registered its second worst start to La Liga in 25 years, and Gallego was sacked in October after Espanyol were 19th in the table. Former Girona and Sevilla tactician Pablo Machín was hired, but he couldn’t revert such negative form and, 77 days later, he was shown the exit door when the team was standing in the 20th position.

Abelardo Fernández, an expert at dealing with such complicated situations as shown during his time at Sporting Gijón and Alavés, was chosen as Machín’s replacement. The early signs were very encouraging. Abelardo acted with coherence, using simple yet easily applicable ideas such as a 4–4–2, defensive organisation, wing play and lateral crosses, and verticality. Espanyol drew 2–2 against Ernesto Valverde’s Barcelona, and the signing of star striker Raúl de Tomás from Benfica just made the levels of hope skyrocket at the RCDE Stadium.

But, while the Catalans gained momentum, the coronavirus break heavily hurt them. While they beat Deportivo Alavés by 2–0 in the return of the competition, since then it has been one draw and five losses for the Blanquiazules, with a tragic streak that has all but confirmed their relegation to the Second Division.

Still, before hosting Real Madrid a week and a half ago, and in a state of maximum desperation, the Espanyol presidency decided to sack Abelardo. He hadn’t done that bad, and many fans saw him as a coach more than good enough to manage them in the second tier in the following campaign. But rushed decisions were taken once more.

After Abelardo, Francisco Joaquín Pérez Rufete, who had previously been acting as the sporting director of Espanyol, was announced as the interim coach for the remainder of the season. He hasn’t managed to revert the team’s fortunes either, with two losses in two matches. Tonight they will be visiting the Camp Nou, the stadium of their great city rivals Barcelona, and if they lose again their relegation will already be official in spite of three more games being left.

A frequent problem with Espanyol in recent seasons is that they had often fallen in positions of indifference. Not close enough to the red zone, but neither to the European spots. Good enough to survive, but not to progress and make a step forward. Until last campaign, in which Rubi sent them to the international competitions for the first time in twelve years thanks to a seventh-placed finish in La Liga.

After immense optimism following a decade of indifference came the tragedy. Now Espanyol, with 11 points less than 17th-placed Eibar and with only four matches remaining, are on the cusp of their fifth relegation in history. The previous ones had been in 1962, 1969, 1989 and 1993, the last one being 27 years ago.

Despite having won only four Copas del Rey and no La Liga titles in their history, Espanyol are a historic club in Spain. In fact, after Real Madrid, Barcelona, Athletic Club and Valencia – the former three have never tasted the Second Division –, Espanyol are the fifth club with most seasons spent in the top flight of Spanish football: 85 in total. Now, though, the counter will be stopped as Espanyol will be returning to what’s said to be the hell of football.

The first two matches from Rufete as the first team manager, especially considering he is an interim manager, are not enough to reveal his tactical preferences. Still, he has continued along the operating line from former coach Abelardo. If last term under Rubi Espanyol were characterised by their search for possession, in recent months they have mostly tried to rely on a lower block and direct attacks in order to survive in the division.

In January, after their alarming situation in the table, Espanyol decided to make some important additions to their squad. Mostly, Getafe centre-back Leandro Cabrera, Rayo Vallecano attacking midfielder or winger Adrián Embarba, and Benfica centre-forward Raúl de Tomás. They have all made a contribution, but it has by no means been enough to fix all the collective problems.

Rufete, like Abelardo, has been using a 4–4–2 or 4–4–1–1 with a more natural striker like Raúl de Tomás as the reference, partnered up by a secondary striker like Wu Lei or Embarba himself. One of the reasons for the huge difference in the Periquitos’ performance this course compared to the last one, though, has been in midfield. Espanyol decided to modify what was already working a year ago.

Pivot Marc Roca alongside Óscar Melendo and Sergi Darder as interiors, all of them raised at their academy, sounded like a perfect combination for a 4–3–3. Nevertheless, when Espanyol switched to a 4–4–2, all struggled. Melendo and Darder, in particular, and in spite of their brutal technical quality to operate in central positions, have mostly been deployed as wide midfielders in the flanks. This has not benefitted them nor the team.

Espanyol don’t have the worst attack nor the worst defence in La Liga, but the second-worst attack and the third-worst defence. Still, with 27 goals scored and 54 conceded, they are sitting rock bottom with the worst goal difference in the competition: –27. They have better individual talents than the likes of Leganés, Mallorca or Eibar, but it is the lack of consistency and poor tactical work behind the team what has damaged them through all these 34 league games so far.

In January, Espanyol welcomed 25-year-old centre-forward Raúl de Tomás as their saviour. The former Benfica, Rayo Vallecano and Real Madrid man certainly deserves much better than to be fighting to avoid relegation. And, when he arrived, it was already proved that he could be decisive wherever he went. The Blanquiazules‘ best player by some distance, he made an immediate impact as soon as he arrived.

In fact, Raúl scored four goals in his first four matches with Espanyol. Lethal, self-sufficient, excellent both in and around the box, capable of generating chances out of nowhere…Espanyol, with full-backs that make no contribution going forward and midfielders that feel uncomfortable in their respective positions, may well be the team with the worst attacking structure in La Liga. Thus, and especially with the sale of Borja Iglesias, they needed someone that could create opportunities and score goals on his own.

Nevertheless, after his four opening goals, R.d.T. hasn’t scored since, picking a couple of injuries along the way. When fit, the problem has obviously not been him, but the context. While he is very autonomous, Espanyol have barely had any automatisms to progress the ball and they have greatly struggled to send balls to Raúl de Tomás.

It is undeniable that Barcelona are utterly superior to Espanyol. Individually, the differences are obvious. But even collectively, and despite Barça’s several problems over the season, the blaugranas are far more cohesive and have way more clarity than their local rivals.

“We will fight until there is a silver lining”

Espanyol being last in the table certainly is not by chance. Everything that had gone well for them last season has collapsed or has been brought down. Defensively and offensively, on and off the pitch, they have been the embodiment of instability.

With that being said, and even if they are virtually relegated already, Espanyol will be playing for their lives tonight. With nothing to lose, and with the passion that a derby generates, Rufete’s men will be ultra motivated in their visit to the Camp Nou. As if there was no tomorrow.

• What should the Barcelona line-up be against Espanyol?