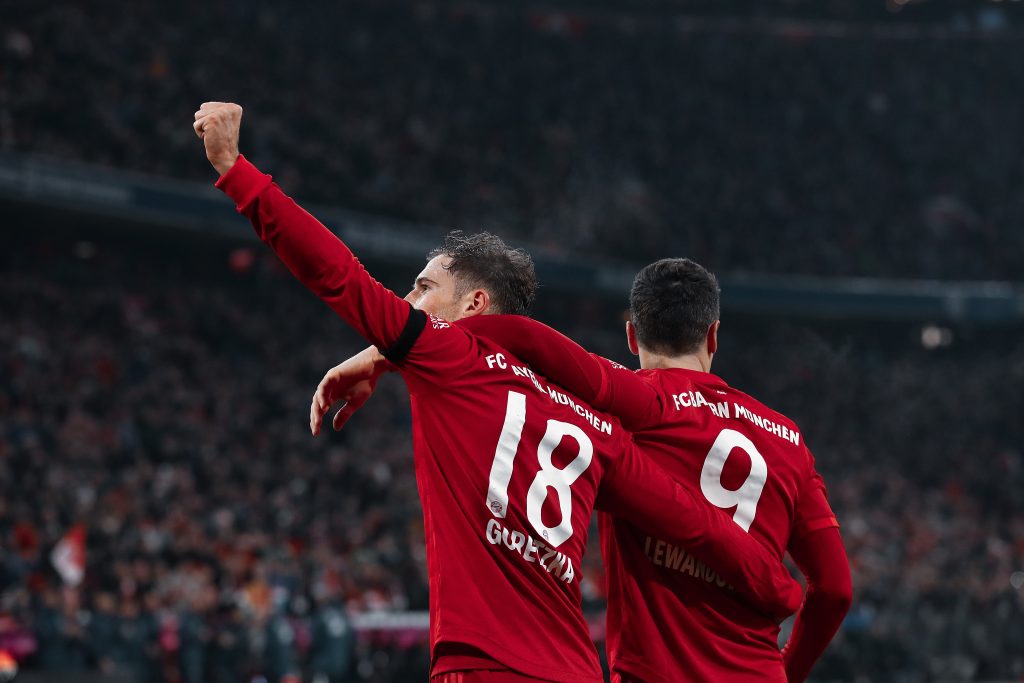 The quarter-finals’ most anticipated clash is finally here. Barcelona locks horns with the favourites of the competition Bayern Munich in what will prove to be a decisive encounter. The Catalans breezed past SSC Napoli in the second-leg after a goal-fest in the first half. In this piece, a tactical analysis will be provided on the set-up, areas of strength and of weakness of Bayern Munich.

Bayern Munich and Barcelona face each other in the critical Champions League quarter-finals on Friday night. They are two clubs who changed managers mid-season, but two contrasting scenarios emerged. Bayern’s Hans-Dieter Flick is receiving accolades and appreciation all across Europe, while Quique Setién is under severe pressure. The reason behind the conflicting stances is the obvious levels of success both coaches have achieved. Flick masterminded his team to make a comeback title win at the Bundesliga. Setién, on the other hand, oversaw his side squander the lead at the top to gift La Liga to their rivals Real Madrid.

The difference occurrences now result in a difference in the mood around each camp. Usually irrespective of what the fixture is, Barça enter into the game as favourites. However, for once, this time, the Bavarians are tipped to win the tie. And this not only has to do with the difference in quality, form and fitness conditions, but it also has to do with the current mentality. Bayern Munich is on a seventeen match winning streak across all competitions which dates back to February of 2020. And now, they are just three wins away from completing the continental treble.

Having taken over the helm from Niko Kovač in November, Hansi Flick had a massive task ahead of him. Indeed, there wasn’t an astronomic point gap for them to overcome, but what he had to improve is the mental condition. Under Kovač, every single player was mentally drained out. They were tired of his training methods, frustrated with the tactics, and felt restricted with the lack of freedom. And this was visible in Bayern’s final games under Niko, where they didn’t seem to be enjoying their football.

So, when Flick took over, the first thing he did was set the player free. Players like Thomas Müller appeared to have no future at the club under the previous boss, now has reignited his career at the German outfit. Furthermore, Bayern began to play with a swagger and intensity that nobody saw after the Jupp Heynckes era. The players regained their confidence and have been restored into their best positions.

Hansi guiding Bayern to their eighth consecutive Bundesliga title seemed to be the most logical conclusion to their season. Along the way, they also picked up the DFB-Pokal. Having closed off the tie of the round of sixteen against Chelsea at Stamford Bridge itself, everybody expected them to be a little less intense in the second leg. Nonetheless, they maintained their ruthlessness, in fact, upped it, by beating them 4–1 at the Allianz Arena, with an aggregate of 7–1. They now head into the clash with Barça with utmost confidence that they can get the job done.

The fact that Barcelona will be underdogs in the clash will actually permit Setién to go with a different tactical approach. We saw numerous azulgrana enthusiasts expressing their displeasure for how the Catalans saw out the second half versus Napoli. But frankly, the fans wouldn’t really raise their voice over the performance as long as they beat Bayern. Flick will set his team up in a 4–2–3–1, with a rush of pace across both flanks.

While David Alaba has converted into a makeshift centre-back, he has actually done a fantastic job there alongside Jérôme Boateng. On the left flank, Alphonso Davies continues to shine brightly. His overlapping runs and surges upfield have been a pain in the neck for any side that faced Bayern. With Kingsley Coman also sitting ahead of the Canadian there’s an unbelievable amount pace and acceleration on the left wing. Still, both of them remains a doubt for the game against Barcelona due to minor fitness niggles.

From their full-backs to their striker, Bayern have an extremely complete side in all positions | Photo by Christian Kaspar-Bartke / Bongarts via Getty Images

On the right, they will be forced to deploying Joshua Kimmich at right-back. After Benjamin Pavard picked up an injury in training, the German who has been enjoying his football at midfield is forced to cover for him. Notwithstanding, that in no way does weaken the midfield as it paves the way for former Barcelona man Thiago Alcântara to make the double-pivot. The elegance of Thiago and the brute of Leon Goretzka will be a challenging combination to deal with. Serge Gnabry will look to maintain his ruthlessness on goal, after having a great season both as a right winger and an inverted winger when needed.

“Bayern are not just Lewandowski. The wingers get forward a lot, Müller, Gnabry are also very good…Lewandowski scores a lot of goals but the danger comes from anywhere”

Thomas Müller, who renewed his contract with the Bavarians is expected to cause menace for Barça’s backline through his movement. The Raumdeuter‘s work without the ball is what makes him one of the most challenging players to handle. Even so, his efforts don’t stop with just exploiting open spaces, as he also has an eye for the pass. He is one of the primary reasons why Robert Lewandowski manages to get into many scoring positions.

Bayern are expected to maintain a high line and press heavily upfield to retrieve the ball quickly. After that, they will look to quickly distribute it to the flanks, predominantly the left side. Lewandowski and Müller will be making life tough for Gerard Piqué and Clément Lenglet inside the box. The entire backline of Barcelona should have a steadfast performance if they intend to keep Bayern at bay.

Indeed, in a team full of quality, it would be unfair to pick only one player and say that he’s the crucial one. Nevertheless, there’s not much to argue over the fact that Robert Lewandowski must be watched throughout the game. Currently, the Pole can be regarded as one of the best strikers in the world. He doesn’t let even half chances go by and has made it a habit to make the opposition pay dearly for giving him space.

After scoring 34 goals in the Bundesliga, he was robbed late of the European Golden Shoe by SS Lazio’s Ciro Immobile. In the Champions League, he currently is on 13 goals. He was involved in all four goals the Bavarians scored versus Chelsea in the second-leg, scoring and assisting two apiece. Unlike most goalscoring strikers, Lewandowski has a lot of work involved in the build-up play as well. In addition to pressing high and winning the ball back, he also tries to hold it close to his body and free the wide-men.

At 31 years of age, Robert Lewandowski has been enjoying one of the best seasons of his career | Photo by Mike Hewitt via Getty Images

While Alphonso Davies makes overlapping runs from the left flank to feed deadly crosses into the box, Lewandowski makes sure that he is there to convert it. It’s not easy to be as consistent as the number nine has been for Bayern. Barcelona should ensure that he is devoid of space, time, and opportunities, else he can put the game to bed long before schedule. However, it is safe to say that one would have to sympathise with him. There’s no denying that this was statistically one of his best seasons. And had the France Football Association not rescinded the Ballon d’Or for this year, he would have been in contention for sure.

That said, Setién’s backline should be aware that in terms of challenges, there are hardly any mightier than Lewandowski. And keeping him quiet would essentially give the blaugranas a massive chance of progressing to the semis.

While Bayern Munich have many players worthy of praise and caution, there’s no hiding of the fact that even Barcelona possesses plenty of firepower. Lionel Messi still hasn’t been mentioned in this tactical preview, and he alone is enough to change the entire narrative. While Bayern has collectively had a fantastic season, the Argentine supremo continues to win games on his own. His goal against Napoli in the second leg was an epitome of resilience and desire. If he turns up to the occasion, then Bayern will definitely have to take a step back and focus on defending as well.

Aside from Messi, Barça have Luis Suárez and Antoine Griezmann who are slowly picking up their game at the right time. But the most pleasing development for the Catalans is the return of Ousmane Dembélé. The 23-year-old was given the green light by the medical staff to feature against the Germans. Undoubtedly, he will be exhilarated to make a comeback. Dembélé’s return comes at the perfect time as Setién has been completely devoid of wingers. The fact that Ansu Fati was the only viable option available for the Spanish tactician indicates how out of depth the squad is in certain departments.

“Of course, we are convinced. We know the potential of the rival, their numbers and their capacity, with extraordinary potential, but we are too. I think it will be an even game, with alternatives. We have a lot to say in this game.”

It’s never easy to pick a definite winner when both squads are filled with players who can win games by themselves. Both sides should be wary of each other and should look to produce solid performances defensively. The fact that they’re only three wins away from winning the Champions League should be an extra motivation for both Barcelona and Bayern Munich. At the end of the day, a high voltage tactical battle awaits us. And irrespective of who comes at the top, we will have ninety minutes of football of the highest order.