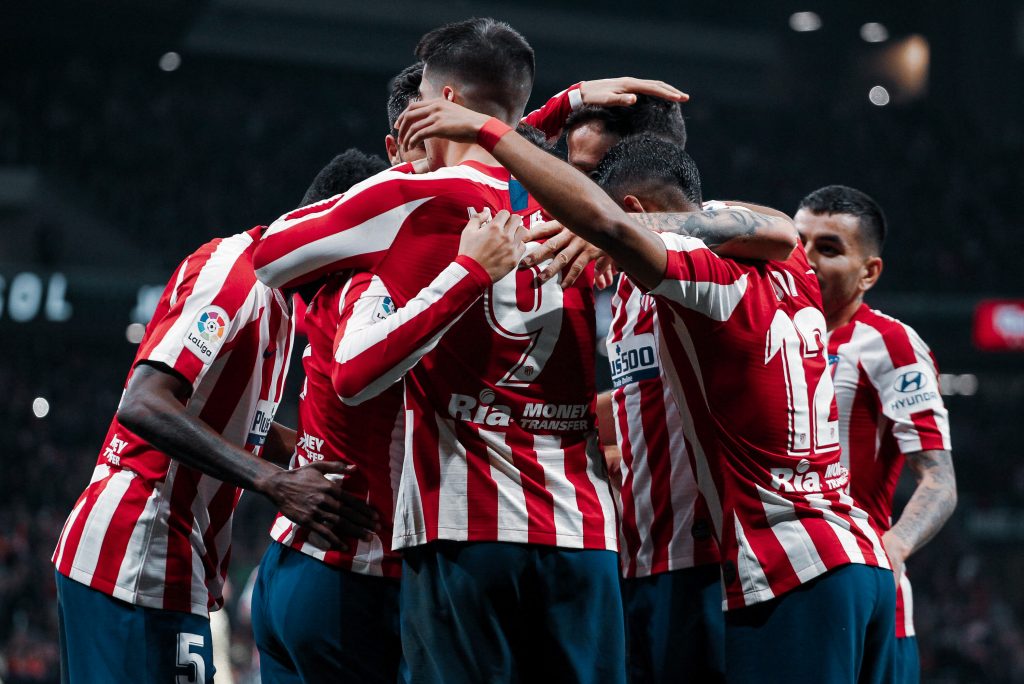 Barcelona heads into matchday 33 sitting at second, two points behind league leaders Real Madrid. With six matches left, every single game must be considered as a final. The Catalans will be playing the third horse of La Liga’s usual ‘three-horse race’ Atlético de Madrid on what will prove to be a six-pointer, and thus this tactical analysis will provide a look at the strengths and weaknesses of the colchoneros.

Barcelona are well aware of the situation they are in. Any more slip-ups and they could say goodbye to their hopes of retaining their La Liga crown. Unfortunately for them, they face arguably the toughest opponent at the wrong time. With Quique Setién facing an undeserved amount of hate, his side hosts the tricky and always tough Atlético de Madrid. Sadly, Setién is struggling with the dressing room politics and is receiving stick from the players and the press for his inability to control the dressing room.

He doesn’t have time to sort out the issues off the pitch and will now have to focus on the massive challenge ahead. Diego Simeone will be licking his lips as he will be bringing his side to the Camp Nou at the right time. With Barcelona in disarray and the players hardly focussed, Simeone will be looking to exploit the situation to his team’s benefit.

Diego Simeone’s Atlético de Madrid are 11 points behind second-placed Barça. With a massive squad overhaul and influential veterans at the likes of Diego Godín leaving, the club had struggled initially. They spent massively on refurbishing the squad, particularly the signature of João Félix, that is yet to bear fruits. The faulty start to their season saw them fall out of the top four for quite some time. And at one point, people were worried if Simeone was going to leave mid-season. However, they have picked up the ground and got back to where they belong.

Notably, they began to pick up the pace for the Champions League knockouts. When the draw came out, and it was announced that Atleti would be playing defending champions, Liverpool, everybody predicted an easy win for the Scousers. But the rojiblancos surprised the world by beating them 1–0 in the first leg. Despite the narrow victory in the first leg, they were expected to bow out in the second leg at Anfield. And this is where they changed everybody’s thinking of Anfield.

They turned up for the occasion, beating Liverpool 3–2 in their own backyard and winning the overall tie on a 4–2 aggregate. On a night when the odds were entirely against Simeone’s men, they pulled off a massive upset. And this should sum up what kind of a manager he is and the qualities that he has established at Atleti. It is safe to say that the Champions League round of 16 triumphs over Liverpool was least expected because of their form.

The second leg win was the last game they played before football had its unprecedented break, arguably the best way to close off to a three-month rest. Since the restart, they seem to have been carrying that momentum. They drew the first game with Athletic Club de Bilbao but followed it up with four successive wins. The defence seems to be in its usual rigid form as they have only conceded twice since returning.

As you can see, Atlético de Madrid are always near the summit. Since winning La Liga in 2013/14, they have established themselves as one of the best sides in Spain. In addition to their smart business, pragmatic ideology, and complete faith in the manager’s plans, they had patient fans. As we all know, Atleti doesn’t play the prettiest football. They are known for their rigid system that is virtually impossible to break down when in form. Most of the times, they play for the result, grinding out 1–0s, and even relinquishing possession to inferior sides for game management.

Nevertheless, that philosophy has come with a massive bonus of silverware. Under Simeone, they have won the league, the Copa del Rey, the Europa League twice, the Spanish Super Cup, and the UEFA Super Cup twice. El Cholo‘s defensive-minded approach may have received criticism from those who don’t appreciate it. But that doesn’t mean that everybody despises Atleti’s style of play. Their fans enjoy their footballing ideology, and many other neutrals appreciate Simeone’s approach to football.

With another third-place finish on the way, Simeone’s Atlético de Madrid can be branded as one of the most consistent sides across Europe. Their only regret would probably be to not win the Champions League despite going to the peak on two occasions. Although they were denied the title on both occasions by their bitter rivals Real Madrid, Simeone’s side didn’t crumble and only got better with time.

The 2–1 triumph over Deportivo Alavés on Saturday was a landmark victory for Diego Pablo Simeone as he overtook Luis Aragonés – 194 wins – as the coach with the most top-flight wins in the club’s history.

To elaborately explain Simeone’s philosophy, it’s essential to understand the significance of his 4–4–2. Two banks of four, with a centre-forward and a secondary striker to feed off the striker’s runs. El Cholo‘s idea of defensive stability may be simple to comprehend, but it’s herculean to execute. The signing of João Félix makes more sense as you look deep into their tactics. The secondary striker has to exploit the space that’s left by the opposition to mark the centre-forward. He needs to be aware of these intricate vulnerabilities in between the lines and make the most of it.

Still, one can say for sure that the Portuguese wonder kid hasn’t performed to the expected levels. But he must be appreciated for working hard to adapt to Atleti’s contrasting philosophy when compared to his former Benfica’s. In spite of not justifying his hefty price tag, he has done his best to fill the shoes of Antoine Griezmann. He is the club’s second-highest goalscorer in the league only behind Álvaro Morata.

While the back four poses an impossible challenge aerially, they also make it tricky to be broken down within the lines. Simeone’s ideology works on the player’s understanding with each other. And this is why they found it tough to adapt immediately. Before teams can even think of attempting to bypass the backline, they must first get past the rock-solid double pivot.

The combination of Thomas Partey and Saúl Ñíguez can be regarded as one of the world’s best double pivots. Together, they boss the midfield battles, winning duels, and moving the ball quickly to the wide-men to threaten the opposition. Even after breaking past Atleti’s absolute barriers, a goal is never guaranteed. Jan Oblak is one of the world’s best keepers who is capable of pulling off inhuman saves to prevent the opposition from scoring.

“The matches against Atlético are always very tough”

Overall, the colchoneros‘ style of play is built upon the ideology that every player irrespective of their position, should be involved in the defensive process. It’s hard to break down a team that has all eleven men working in rapt synchronisation. They have the second-best defence in the league, having conceded only 23 goals, two more than Real Madrid and ten less than Barcelona. Just like every encounter, Barça’s most likely source for scoring is Lionel Messi. The Argentine’s dribbling, defence-splitting pass range, and set-pieces will be crucial to bypass Atleti’s rock-solid wall.

Conventionally, while analysing the opponents, the player to watch is always likely to be a winger. Still, for Atlético de Madrid, the person who should be continuously kept at bay is their defensive midfielder Saúl Ñíguez. With club captain Koke Resurrección suspended, all eyes will be on Saúl for providing inspiration and leadership on the pitch against the Catalans.

At first glance, the Spaniard would look like any other defensive midfielder. But when you particularly focus on him, you’ll understand that he is the fulcrum of Atleti’s philosophy. Their defensive system requires someone who can sit at the heart of the pitch and act as a link between defence and attack. While Thomas Partey is entrusted with a more rigid role of winning the physical duals and dispossessing the opposition, Saúl is the player who brings flair to the team.

He is one of the most versatile footballers in the world as he can play as a centre-back, fullback, wingback, and even winger. In addition to his ability to be an ideal distributing defensive midfielder, he can vouch for absentees at any part of the pitch. But if deployed in his usual position, he is responsible for kick-starting the transitions from defence to attack.

Saúl Ñíguez is close to undroppable for Simeone | Photo by Imago

No team can defend the entire 90 minutes without attacking, not even Atleti. The idea to hit the opposition on the break can only be achieved with a swift passer who can change the pace of the game. The reason why Saúl is so underrated is that he doesn’t have the goals or assists to show for his massive effort. He doesn’t dribble often and always focuses on ensuring that the ball reaches the striker before the opposition is ready to defend.

Saúl has a wide range of passing and will be relied upon for both distribution and ball retention. He wins fouls in dangerous positions, can slow-down or amp up the pace of the game, and also has an imposing presence on the pitch. Barcelona should look to ensure that Saúl receives less time with the ball, and also be wary of his defensive qualities while attacking. He is smart enough to read the various tricks the opposition have while building the attack and must be handled carefully throughout the game.

The significance of this game for Barça doesn’t need to be elaborated, as the league standings speak for themselves. With a cloud of negativity looming over the blaugranas‘ camp, Simeone will be looking to exploit the situation. Nonetheless, the gameplan and the overall pace of the game would be no different from any other Barça versus Atlético de Madrid tie. The Catalans are likely to have more of the ball and will be frustrated by the rojiblancos‘ unbreakable set-up.

The focus should be on both attacking and defensive set pieces as those are the most viable options for both sides to score. Atleti will make it close to impossible for transition within the lines. And so, individual brilliance from Messi could be the potential game-changer. That said, visitor’s attacking firepower must not be underestimated. Diego Costa, for instance, will always be a thorn in the flesh for Barça.

Anfield hero Marcos Llorente is also being used in versatile positions, and must also be observed carefully if he plays. Even though João Félix hasn’t had the most brilliant season, he must not be overlooked as he can be quite dangerous when he gets going. The game is likely to be a tactical clash between two contrasting ideologies. Will it be fluidity or pragmatism that comes on top? We will have to wait till tomorrow to find the answer to that question.

• Do or die: why the Atlético de Madrid game is the title decider for Barça

• Quique Setién has not yet had a clinical Lionel Messi