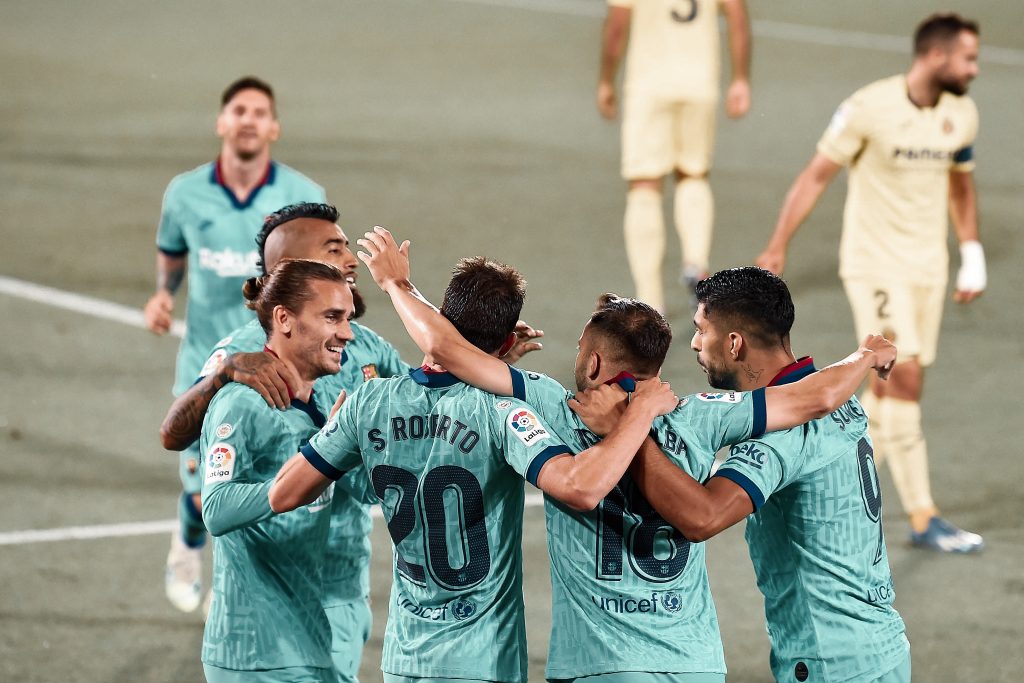 In the past two games, against Atlético de Madrid and Villarreal, Barcelona coach Quique Setién has been experimenting with a new system: a diamond-shaped 4–4–2. What are the keys behind it?

Barcelona won 1–4 at Villarreal on Sunday night and a new system, not Lionel Messi, was the biggest talking point. Manager Quique Setien seemed to unlock the full potential of his illustrious forward line with 4–1–2–1–2 formation. In this article, the keys, flaws and potential variations in such system will be analysed.

For the first time in the 2019/20 campaign, fans got to see a genuine sign of partnership between the front three of FC Barcelona. Like it has been throughout the season, everyone thought World Cup winner Antoine Griezmann would start on his unfavourable position that is the left wing of the field.

But to many’s surprise, against Villarreal and possibly in the previous clash with Atlético de Madrid too, Barça lined up in midfield with a diamond formation for the first time. The team had been struggling with the lack of freedom, especially in the final third of the gameplay, but this experiment hit the bull’s eye. Let’s take a look at such formation below.

This is how the Barcelona lined up against the 4–4–2 formation of Villarreal. Villareal started playing with a high defensively line, which definitely benefited Barça’s system. With Luis Suárez and Antoine Griezmann in the left forward and right forward positions, respectively, playing so close to each other with the support from Lionel Messi in the mediapunta position, the teams would try to crowd the midfield to intercept passes between the lines.

Now, here comes the role of providing width to the team, which both the full-backs of Barcelona played to their potential. They were constantly asked to do so much of work to stretch the field, primarily in the first half against Villarreal.

Certainly, Griezmann playing on the left wing is of no good use to Barcelona. Because as soon as that happens, Messi tends to find only Suárez in the central field, which again results to the blaugranas being outnumbered in the final third and, thus, losing possession.

On whether he would stick with said system, Quique Setién remarked: “Let’s see. The reality is that everything went very well the other day because we scored and we had a fluidity that perhaps we had not had in other games. But there will be a team that will prevent us from doing what we did the other day because they will be a lot more closed.

“All the games are different, we have several alternatives. Since we arrived we have tried to find solutions to the situations that the opponent puts you in. The important thing is that the footballers understand well what we intend [to do] and then they can do [what they did] the other day: put extraordinary goals in like the one Griezmann scored, [one] that defines matches, and otherwise we will continue to look for alternatives. Hopefully it is the position in which Antoine performs better”

Loophole in the system

The only issue that appeared with such style of play was that it left a lot of gaps for centre-backs Clément Lenglet and Gerard Piqué to cover up on the opposition’s counter-attacks. And that in fact is how Barcelona conceded Gerard Moreno’s goal.

Even though Sergio Busquets dropped back constantly when the full-backs were upfront, there was certainly a lack of pace to cover up against the opposition wingers. The Barcelona coach needs to find a way to recover that space in defensive transitions and basically regain the shape to stop such threats. Going forward, this is the main loophole the rivals could look to exploit against such system.

Can other players thrive in this system?

Simply put, the system that Quique Setién has experimented with can work along with other players as well. The likes of Frenkie de Jong and Riqui Puig both are athletic, technical and have immense awareness about their positions. Therefore, it could be interesting to see how they come up together. Riqui Puig has already proven why he deserves to be a starter in the team, and it’s just a matter of time until De Jong also returns to full fitness. Puig instead of Arturo Vidal on the field would definitely provide more poise and quality to the team in the final third.

But this formation and system is in its very early stages. It may not work out against other teams. With the league close to being lost, what the coach should attempt to do is to perfect this system with a little bit of iteration. For example, one of the formations could be 4–2–3–1.

Here, Ansu Fati could take the load off from Jordi Alba by providing constant width to the team on the left flank. Same goes for the right flank, with Griezmann being given free role being the second forward beside Suárez.

This may or may not work out as a remedy for the gap left at the back while full-backs are providing support in the final third. Barça will need to eradicate these flaw in time for the Champions League, in August. In the end, more than the players on the pitch, it is also about the right positions they are played in.

• What should the Barcelona line-up be against Espanyol?