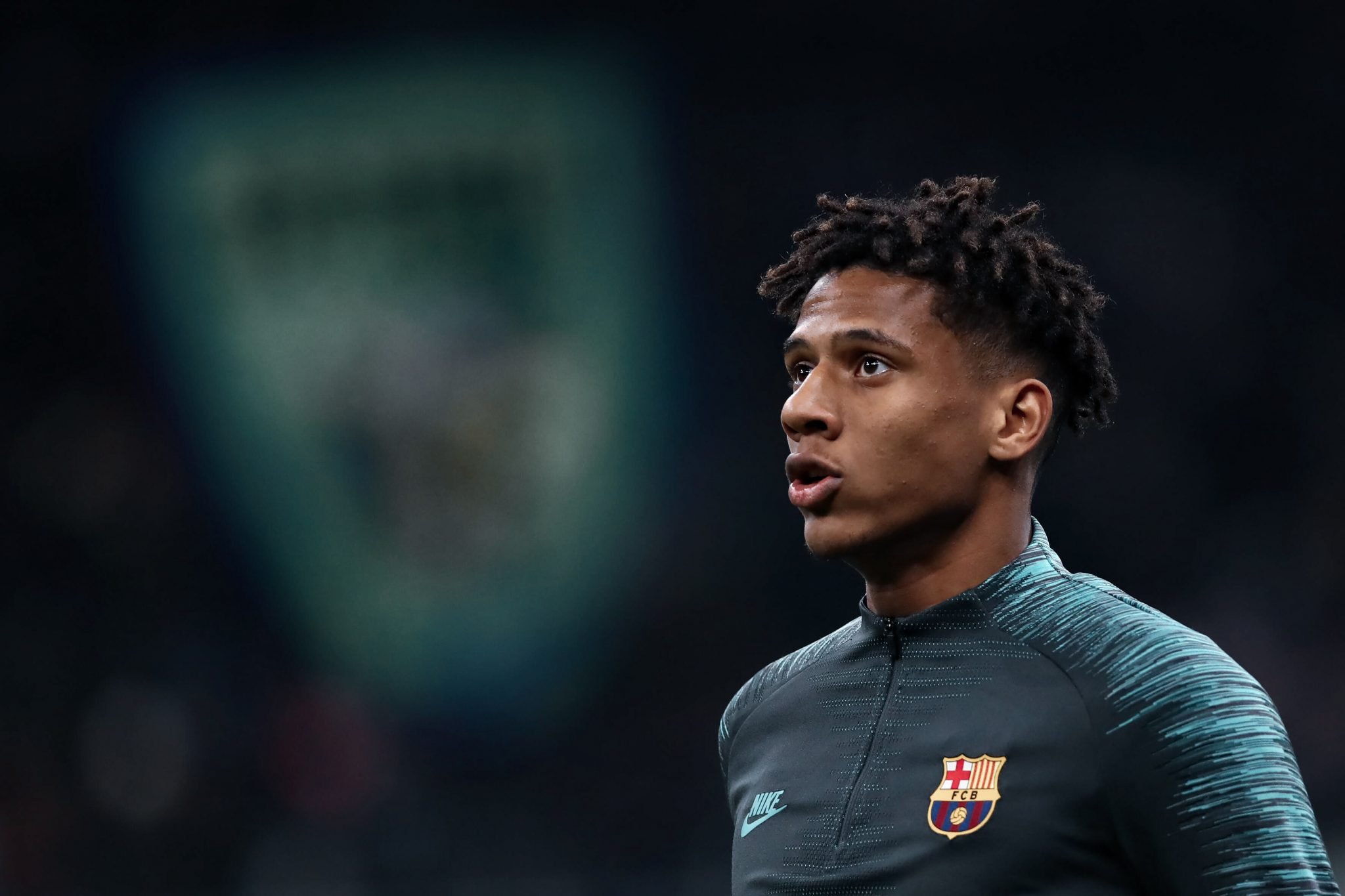 A subject of much controversy and debate in recent weeks, Jean-Clair Todibo has effectively ruffled the feathers of hoards of Barcelona supporters. His comments of late regarding the club, his time in it and his future have gotten mixed receptions, with some either sympathizing or critiquing his voice of words.

As always, there is always more to it than meets the eye, and in this article from Barça Universal, we explore just that.

His short-lived spell at Barça

Signed from Toulouse in the first half of 2019, the Frenchman was chosen by Eric Abidal as the heir to Gerard Piqué’s throne. At the time of the announcement of his signing, there was but just one teenager who had made more clearances than the youngster in Europe’s top five leagues.

Upon touching down in the Catalan capital, he described being at Barcelona as a childhood dream, but little did he know it would never see the light of day. The 2018/19 campaign simply passed by, with hid only minutes in the campaign coming after Barcelona’s La Liga triumph over Atletico de Madrid.

In the 2019/20 season, he first featured against Getafe, though as a mere substitute in the final two minutes of stoppage time. His true introduction to Spanish football came against Sevilla in La Liga in Barça’s 4-0 rout of their Andalusian counterparts. His performance on the night, while not incredible, showed promise. His teammates were comfortable passing him the ball regardless of the situation, and despite some lapses in concentration here and there, he had an overall commendable performance.

Where he truly shone was against Inter Milan away from home. Up against one of Europe’s most lethal attacking duos in Lautaro Martinez and Romelu Lukaku, the Barça number six did not break a sweat. The sheer ease at which he moved with the ball and his overall defensive aptitude left many in awe. In true ‘Barça Style’, he always looked up in search of a pass, and when the passing avenues were absent, he showed no fear whatsoever trekking upfield to generate them.

This should have been enough of an indicator to Ernesto Valverde that he was worthy of — at the very least — a position as a substitute, but this mesmeric performance would be his last representing the iconic Garnet and Blue of Barcelona.

He was briskly loaned off to Schalke in January in a move that was not all that beneficial for him given the side’s style of play which rather than propel him, mitigated his maximal abilities.

The root cause of his frustrations

For a youngster, one of, if not the, most salient things in one’s development is game time. There is simply no way around it. Before signing for Barcelona, Toulouse denied him any minutes on the pitch from November, as the 20-year-old turned down their efforts to sign a contract extension. This resulted in him missing out on football for the better part of eight consecutive months.

Once in the first team, to have received only 165 minutes from a possible 2250 was as big a slap in the face as they come. The Catalans taking him from Les Gones via their rather oddly timed — and awfully greedy looking — signing ensured that he would play no further part in their season. They essentially closed off all possible avenues for him to play, all so they, and no one else, could have him.

Todibo had the following to say:

“The presentation in Barcelona, it’s madness, but I only played five matches, it’s bogus in real life. I won a La Liga (in 2019), but I didn’t help the team, I played when we had won the title!”

The Frenchman’s anger at the club is warranted. More than just feature as a filler ahead of their away game at Anfield — which they heavily lost anyway —, he wanted to feel valued, something Barcelona, more so Ernesto Valverde was utterly incapable of doing.

He expanded on this sentiment, providing two conflicting messages that were given to him while with the Blaugrana: “Abidal saw me as Piqué’s replacement. I played two games, then Valverde told me that I was the fourth defender but that I was going to have to prove in the preseason. Umtiti got hurt. I do the right thing, but I am not given my chance.”

With Samuel Umtiti’s incessant injuries, dreadful inconsistency, and what he was told by Abidal beforehand, it makes perfect sense why he felt so betrayed.

“I’m not asking to play the Clásico, but make me play matches, I think I have the level to play against Leganés, with all the respect I have for them. I waited 2 months to play against Inter Milan, and I understood that I had to leave.”

The Catalans made a strong but subtly delivered message — they didn’t want him there and affirmed this yet again this past summer, with his loan to OGC Nice.

In addition to this, over the past few months, he has expressed his complete and utter disinterest in the club and what happens within it. On the one hand, given Barça still are his parent club, he should be more careful with his words, but on the other, the neglect he received from it was inevitably going to burn down more bridges than it built, was it not?

At this point in time, everything points towards a move away from the Nou Camp, and this is a win-win situation for both. Barcelona could get around €15 million from his sale, seven less than they would have earned had they parted ways back in the summer. With this, they could finance their grand plan to sign Erling Braut Häland from Borussia Dortmund or at least get a worthy alternative to Martin Braithwaite in the striking role.

As for Jean-Clair Todibo, it only makes sense for him to leave. With Eric García arriving in the summer, and this being a signing that Ronald Koeman desperately wants, the Frenchman would be the Catalans’ third choice right-sided centre-back at best, and fifth at worst. Given the presence of Gerard Piqué, Ronald Araújo, García and, to an extent, Frenkie de Jong, staying would by no means be the smartest course of action.

He could perhaps slot into the Dutchman’s role at the heart of a back three given his tantalizing ball-playing abilities, but the lack of a guarantee of playing time at Barça, as well as the incessant stress and criticism bright about in typical style by Spanish media — which he admittedly is not a fan of — steers him farther and farther away.

Once touted as having a higher ceiling than Araújo, this is one signing that will leave many wondering what could have been.