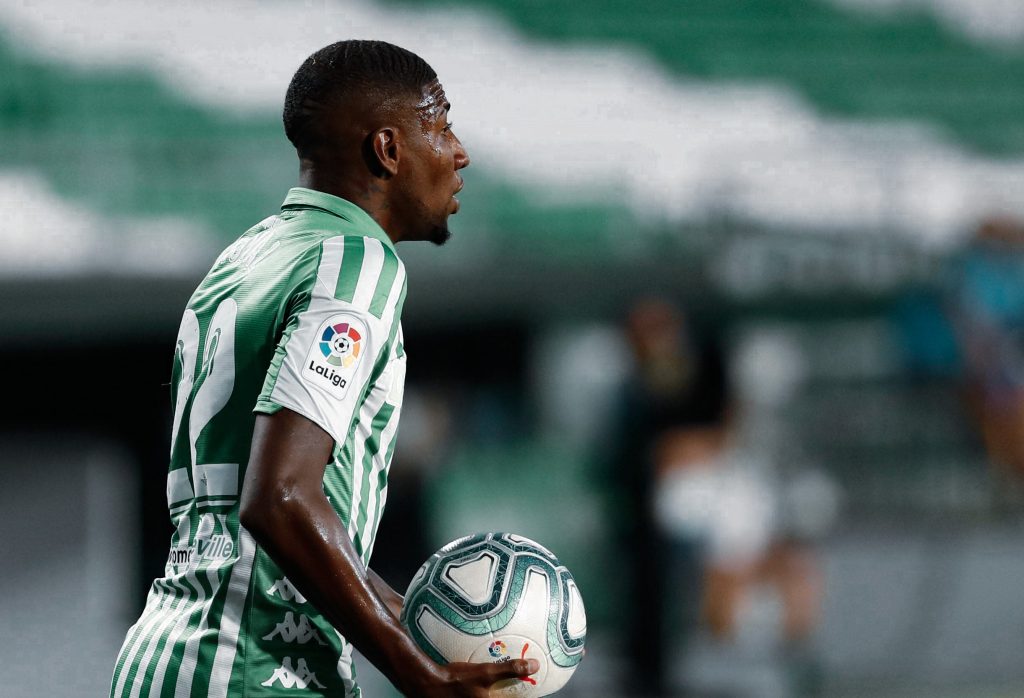 Young right-back Emerson de Souza is experiencing a great moment in his professional career. Little by little his evolution has caused interest from the European giants. He is currently on loan at Real Betis from Barcelona, but the Catalan club has the player’s rights to decide whether to sell or keep Emerson.

Emerson de Souza has gone from being the breakthrough full-back of La Liga and one of the candidates to occupy the so often questioned right-back position at Barcelona next season, to being a market piece due to the pressing financial problems of both Real Betis, where he has been playing on loan for the past year and a half, and Barça, who own his rights.

As both clubs intend to finding him a team in order to strengthen their weakened economy, AC Milan is the club that has shown the most interest in acquiring his services. According to several sources, the agents of the Brazilian, Graziano Battistini and Sebastiano Salaroli, have been meeting in the last days with Milan’s board to discuss the future of the player, whose cost could be of around 30 million euros.

Yet, despite the interest from the historic Italian club, there are unknowns that need to be cleared about the 21-year-old. Should Barcelona sell Emerson, or would he be a useful addition for the Catalans?

At Barça, Nélson Semedo apparently is in the transfer list despite talks over a potential renewal from the Portuguese. Meanwhile, Sergi Roberto has lately been having more participation in midfield, so Quique Setién’s team would be missing a right-back. Likewise, Moussa Wagué will return from his loan in Nice, but he is expected to leave permanently or on loan.

? — Barcelona is looking to extend Semedo’s contract. Both parties are advancing in negotiations. [md] pic.twitter.com/12Uon5VJsg

Emerson de Sourza was signed by Barcelona in early 2019 and has been on loan at Real Betis ever since. The operation for the former Atlético Mineiro defender was carried out for 12 million euros, in which Barça paid 6 million and Betis another 6 million. However, in such deal it was agreed that, when Emerson returned to Barcelona in 2021, the verdiblancos would recover those 6 million previously invested in him.

The links with AC Milan completely change the situation, though. It is a movement that would favour economically both institutions. The Barcelona board is ready to negotiate the departure of Emerson for a starting price of 30 million euros, 6 million of which would go to Real Betis, with the remaining 24 million being kept by the blaugranas.

On the one hand, Betis would recover its investment and avoid the need to sell stars like Sergio Canales or Nabir Fekir. On the other hand, Barça would double the value of a player who has not even played for the club and would greatly help in the economical aspect.

? — Barça, as expected, bought Emerson for financial benefits. The Brazilian will be sold in the summer to clubs who are interested in him like Dortmund, Everton and Newcastle. [md] pic.twitter.com/WVuJG5EkLo

Nevertheless, Emerson has attributes that make him an exciting prospect with great potential. His attacking nature, runs, explosiveness in attack, physical condition and tenacious work in defence could make him a player to consider for Barcelona. If the Spaniards were to sell to Semedo, Emerson would be the perfect option to replace him. That said, both could even share out minutes in Catalonia if Sergi Roberto was moved permanently to midfield and Wagué left.

For Barcelona it could be ideal to give Emerson a chance and, in order not to harm Real Betis, who intend to sell him anyway, the culés could choose to end the loan a year earlier, paying 6 million to Betis, and give Quique Setién another weapon at right-back. In this way, Sergi Roberto would have a permanent place in midfield, Semedo would have some good competition, and Barça another quality right-back without the need of paying large amounts of money for someone like João Cancelo.