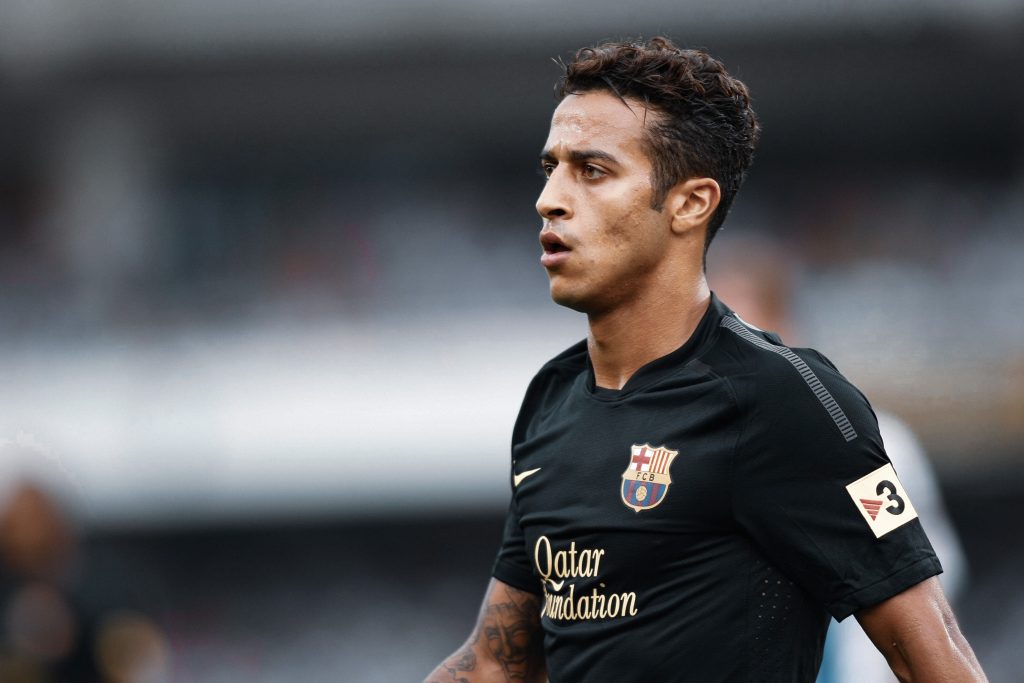 Header Image by Aflosport via Imago

Barcelona and its fans have an undisputed soft corner for their former and current Bayern midfield maestro Thiago Alcântara. The 29-year-old Spaniard is believed to be considering leaving Munich, though, which could have culés excited.

La Masía graduate Thiago Alcântara has been enjoying some marvellous seasons at Bayern Munich since he joined them in 2013 from Barcelona. Nonetheless, the news broke out last night when German newspaper SportBild announced that his spell in the Bundesliga could be coming to an end soon. His contract with the Bavarians expires in June 2021, and the papers for a renewal seemed to be fixed and negotiated already.

But, at the last moment, Thiago reportedly hesitated to sign, making the directives believe that he wanted to depart. The latest rumours have been linking him with Liverpool, who are interested in him as manager Jürgen Klopp really values him. That said, for several years the older of the Alcântara brothers seemed to be close to a homecoming to Catalonia, with the player apparently still interested in a move back to the Camp Nou. The prospect of him returning to Barcelona has got fans excited, and in this piece, we shall see if it is the right move for both parties.

Every single Barça fan would only have good things to say about Thiago Alcântara when asked about him. Ever since he left the Catalan outfit to join Bayern, unrest began to sprout up amidst the fans. Till this day, several people believe that letting go of Thiago was one of the worst decisions their board has ever taken. As we already know the several reasons why the hierarchy is already distrusted, the Spaniard’s exit always comes up whenever the fans express their overall frustration.

Thiago is one of the most joyful players to watch. His technical capabilities are lauded by even rival fans. The blaugrana enthusiasts got to see magical dribbling, extraordinary close-control, and fabulous passes for a good number of years. His distribution, intelligence, and artfulness are still appreciated by everyone. His style of play was so impactful that Barcelona supporters make it a habit to tune into Bayern’s games to watch him play.

Andrés Iniesta and Xavi Hernández were impossible competition for Thiago Alcântara, who decided to follow Pep Guardiola’s path to Bayern Munich | Photo by Aflosport via Imago

Unfortunately for him, he was one of the several talents who were victims to the Iniesta–Xavi effect. Undoubtedly, Thiago had immense potential and posed the capabilities to be a regular for Barcelona. However, when you considered both Barça and the Spanish national team, the reality was that there was no way he would bench one of Andrés Iniesta and Xavi Hernández. He isn’t the only one who was victim to that era of excellence. Valencia’s Dani Parejo practically went under the radar because Barcelona’s legendary midfield duo was simply undroppable for Spain.

Naturally, in search of a more meaningful role, Thiago left for Bayern. He had an excellent all-round development under a variety of managers. From Pep Guardiola to Carlo Ancelotti, Jupp Heynckes and even current boss Hans-Dieter Flick, Thiago got to showcase his capabilities under great coaches. Now 29, he still has plenty of top-tier football left in him. It’s probably the right time for him to consider making another move in his career for a fresh challenge.

Why is Barcelona’s interest marginally sensible?

One of the first clubs that Thiago was immediately linked to once the rumours of his exit emerged was none other than Barcelona. The fans would gladly take him back with open arms, and even he would love to return to his boyhood club. He has a chance to play a more vital role in the azulgranas’ system and become the focal point of their possessional play. Clearly, a return to the Camp Nou can’t be written off as he would be back in a familiar system that wouldn’t require him to compromise his playing style.

The entire footballing world is aware of Arthur Melo‘s frustrating situation. With fresh rumours emerging yesterday that Juventus had reached an agreement on his transfer fee, fans have been fuming. Indeed, the prospect of losing a gem of a player like 23-year-old Arthur after just two seasons is something that the fans can’t digest.

There is now a growing fear within the Catalans’ camp that the Brazilian might actually get persuaded to join Juve. Arthur has already stated several times that he wants to stay at the Camp Nou. But nobody could blame him if he changed his mind considering the way the board is treating him.

Could Thiago be wearing the red and blue colours, but of Barcelona, again? | Photo by Imago

Furthermore, Miralem Pjanić is touted to be heading to Spain. Much to the fans’ frustration, losing Arthur for 30-year-old Pjanić is something hard to take. And this is why Thiago’s situation at Bayern is actually worth monitoring. He is a year younger than Pjanić and is loved by the fans. Instead of shelling the money that comes from Arthur’s transfer directly onto a mismatched profile like Pjanić, the board should actually consider going for Thiago. He would cost lesser and is more suitable for Barça’s style of play.

The fact that he was already nurtured with the Barcelona way would help him fit into the team seamlessly. A midfield combination of Frenkie de Jong, Thiago and Sergio Busquets is something that the fans would enjoy watching. Furthermore, Quique Setién’s side has lacked a spark in the midfield, which can be solved by bringing the magician back.

As much as culés love the prospect of seeing their favourite Spaniard back, there’s a need to put the brakes and talk facts. Thiago Alcântara’s return is hampered by the issues that pertain to both footballing and non-footballing reasons. Firstly, the Barcelona board has a proven record of letting the fans down. They aren’t going to look for a midfielder unless they sell Arthur. And even if that happens, a swap for Miralem Pjanić seems to be the inevitable outcome.

Regrettably, the board doesn’t seem to be considering what the team actually needs tactically. Instead, president Josep Maria Bartomeu and co are only looking at high-profile signings that would enhance the revenue via shirt sales. Although Thiago is high-profile, the board probably wouldn’t have even thought of bringing him back as they seem hell-bent on signing Pjanić.

The second issue that Barcelona fans don’t like to hear is the fact that Thiago is so injury-prone. A glance through his injury history would be enough to discourage those who are hoping for his return. Thiago has missed 129 games for Bayern because of injuries. That is a total of 619 days without playing football due to distress and damage throughout his body, particularly his knee.

The Catalans simply cannot ignore the fact that Thiago’s record of injuries brings an unbelievable amount of uncertainty. His fitness issues make him unreliable. And so, bringing him back would only give a massive headache to the medical staff, who are already doing a poor job. In addition to Samuel Umtiti and Ousmane Dembélé, dealing with Alcântara’s fitness problems would be something that the coach wouldn’t be able to handle.

As much as people want it to happen, there are sporting and non-sporting aberrations that obstruct Thiago Alcântara from returning to the Camp Nou. He is possibly cheaper, with his contract expiring next year, and more suited than Miralem Pjanić. Yet the age and injury record of Thiago, who no longer is a youngster, could be arguments to have in mind. Losing Thiago through injury in the crucial part of the season would be a massive blow for the azulgranas if they acquired him.

Still, regardless of whether Arthur Melo departs or not, Barça would still have reliable alternatives in case of Thiago’s absence. The rise of Riqui Puig seems to be worthy of excitement, and other intriguing prospects like Carles Aleñá and Álex Collado must be seriously considered too. Thiago, already in his prime, could be the bridge before some of them become undisputed starter.

The creativity and wizardry of Thiago, as well as the joy that the prodigy’s return would provoke in culés, should make Barcelona aim at him in case he was available. While Thiago Alcântara is not completely needed, if he was accessible for a fair price the board should undoubtedly consider him as he is the one experienced player the squad can afford to incorporate.

• Thiago Alcântara: The key for the Barça midfield?