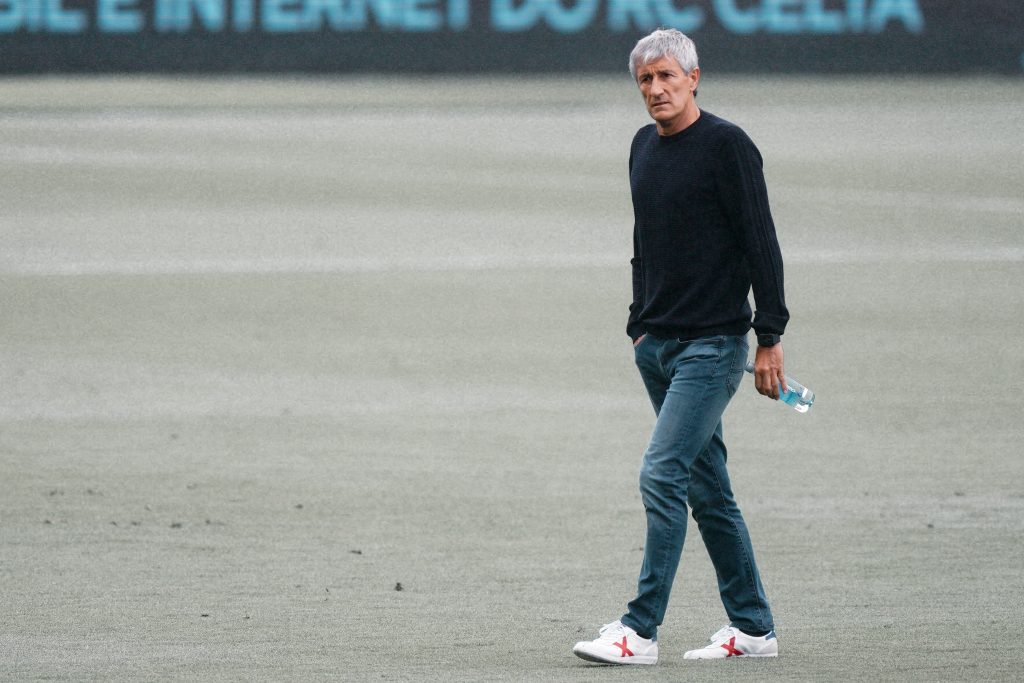 Despite several disappointing results and decisions in recent months, including Saturday’s 2–2 draw against Celta, the unordinary circumstances should make Barcelona fans and board give Quique Setién more time and a larger margin of error.

Barcelona dropped points again on Saturday, in what was at least a close encounter against Celta de Vigo. A performance that would have guaranteed three points any other day. As usual, swords and sickles are out for a number of heads. It is therefore imperative to go back to the chalk board and have a crack at the numbers to see where Quique Setién and his squad stand in comparison to that of Ernesto Valverde. Especially since there have been claims that it was about time Setién exited.

When Ernesto Valverde was sacked in January this year, Barcelona had 40 points out of a maximum 57, with a percentage of 70.17. This rate is notably lesser than a 76.31 percentage that Barça finished the previous season with. The goals scored per game under Valverde this season was at a decent 2.57, though the rate of conceding goals were also high at a 1.21 per game. Simply put, this means that Barcelona had already dropped a lot of points by the time the board decided to part ways with Valverde. If the blaugranas were leading the league by a point as the world went into lockdown due to the corona pandemic, it was merely down to the underperforming Real Madrid.

This is the squad Quique Setién inherited. His tenure thus far has been anything but peaceful. The team has been rattled by injury crises, the world around it has been fighting the pandemic, and stadiums are now stripped off fans. It would be an understatement therefore to say that the circumstances have not been kind to Setién so far.

Add to this the fact that he was not given a preseason to study and interact with the squad and consider and test his options carefully and the picture is nearly complete. Coming in as a new coach towards the business end of a season is precarious to say the least. The stakes are too high and the margin of errors very low.

Given these factors however, Setién’s squad has not done badly at all. Since the change of personal at the helm, Barça has won 29 points of an available 39, with a rate of 74.35 percent. This rate is higher than the first half of the season. While the goals scored per match are a little lesser at 1.76, this can be excused by the long term injuries to main striker Luis Suárez, winger Ousmane Dembélé and an altogether less number of options upfront due the sales and loan of Carles Pérez and Rafinha Alântara. The rate of goals conceded, however, has been limited to a 0.76 per game. Before conceding two goals this weekend, Marc-André ter Stegen set a personal best of five consecutive clean sheets.

“I don’t feel pressure at my work. I am passionate about what I do. If I wasn’t, I would not be here. I am positive here, and I arrive every morning with a smile”

As far as squad management is concerned, though Quique Setién too tried playing safe in a few matches, lately he has been giving playing time to youngsters. Like Ansu Fati, Riqui Puig and Ronald Araújo, all of whom have lived up to the faith the manager showed them.

At the end of the day, even if one admits – for arguments sake – that the league season is lost, it would be foolhardy to place the blame entirely on the recently appointed manager. And it is exactly such hasty and vicious conclusions that would end up harming teams in transition like FC Barcelona.