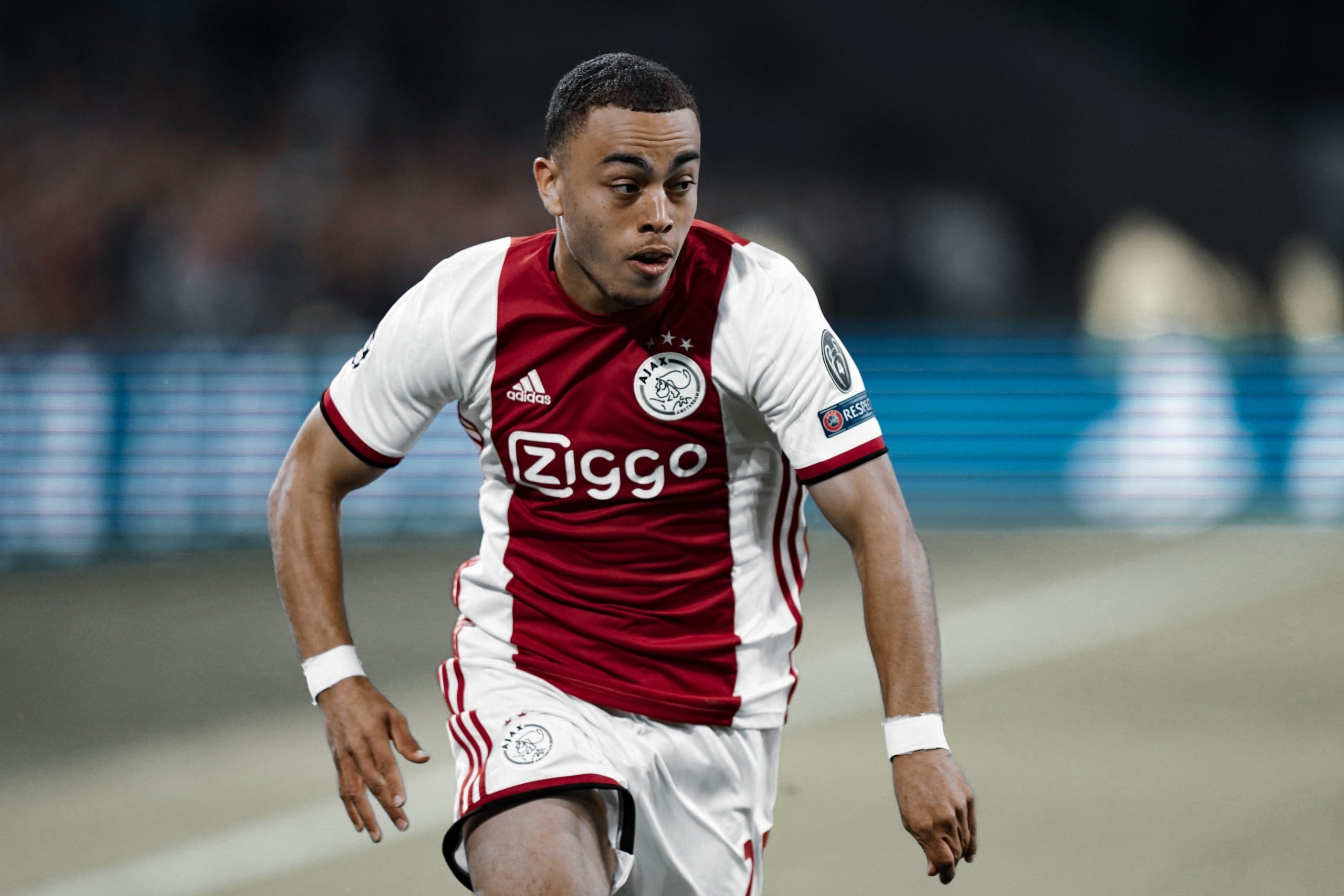 The 19-year-old American had a breakout 2019/20 season, making him one of the most highly-rated young full backs in football. Could he be the next Ajax product to make the move to Barça? Let’s look at what he could offer the side.

Born and raised in Almere, Netherlands, Sergiño Dest is still yet to leave the nation in his club career. However, with a Surinamese-American father, he has always represented the United States national team, first at youth level, and now with the senior side. As a result, Ajax’s current 19-year-old promising right-back would become the first American to ever play for Barcelona if he were signed – although youngster Konrad de la Fuente might not be far off.

While no Americans have taken the field for Barça, there have certainly been plenty of former Ajax players. The connection between the two clubs’ style of play has allowed for many successful transfers from Amsterdam to Barcelona, and there are signs to suggest that Sergiño Dest could be next in line. Coming through the Ajax system, Dest is unsurprisingly calm and skillful on the ball, and he excels in the attack. His stats back this up, and show a player who seems to be ready to take the next step in his career.

Immediately, the attacking output of Dest stands out. For xAssists per 90 minutes, or expected assists – a measure of the probability of the shots he assisted resulting in a goal –, Dest was well above the league average at the 77th percentile. His 0.53 key passes per 90, and 1.05 deep completions – passes completed within 20 meters of the opposition goal line – per 90 ranks him even higher.

Where the teenager really stands out is with his 0.7 crosses into the box per 90. This is a truly elite tally, as it puts him just below the 98th percentile of Eredivisie’s full-backs. Clearly, Sergiño Dest is adept with his passing in attacking areas, an important skill to be possessed by a Barcelona full-back.

In terms of his progressive passing, Dest had a very low volume of just 6.84 per 90, but his efficiency with those passes was exceptional, with an 84.62% completion rate. So while he may be looking to add more to this area of his game, he at least shows quality and precision when he does attempt to play a progressive ball.

It is also worth noting that Dest prefers to progress the ball through dribbling and carrying more than most fullbacks. His skill, agility, and confidence are reflected with him coming in at the 95th percentile for dribbles per 90, and the 84th for progressive runs.

Meanwhile, Sergiño’s defensive numbers show a bit more to be worried about. He only completed 8.88 successful defensive actions per 90 last season, putting him in just the 11th percentile for Eredivisie full-backs. Some of this can be excused as Ajax tend to dominate in possession, and thus Dest does less defending than almost any other full back in the league. However, even when accounting for this possession gap, his possession adjusted interceptions per 90 are still below league average – just below the 41st percentile.

The redeeming factor for Dest’s defending is his efficiency. He won 64.29% of his defensive duels, putting him just above the 70th percentile. While his ball winning leaves much to be desired, it is at least encouraging that Dest doesn’t seem to get beat by attackers often.

To summarize, Dest is an incredibly active full back in the attacking third. He puts in a ton of crosses to the penalty area, and gets the ball to his teammates often in good shooting positions. To progress the ball, Dest doesn’t utilize his passing too often, but he is very inefficient when he does. Instead, he is adept at beating defenders and driving the ball forward when he has space. On the defensive side, a weakness of Dest is shown in that he doesn’t win the ball often, but he shows potential as he wins the majority of his duels.

To give these stats and Dest’s profile some context, let’s look at Barça’s current right back, Nelson Semedo.

For expected assists, key passes, and crosses into the penalty area, Semedo’s numbers are poor to mediocre, and well below Dest’s. He does have a higher cross completion rate than the American, but considering that it’s still below the league average, and that Dest makes over four times more crosses into the box per 90, that’s not too impressive.

The only attacking attribute where Semedo compares well to Dest is deep completions: Semedo made 1.04 per 90 (84.7th percentile for La Liga full-backs), while Dest made 1.05 per 90 (81.8th percentile for Eredivisie full-backs). Nonetheless, when you recall that Semedo has a far lower tally of expected assists and key passes, you can see that Dest is actually doing more with these completions close to the opposition goal.

The Portuguese bests the American for progressive passes per 90 – 7.37 to 6.84 – but his completion rate on those passes is 10% lower. The two do share at least one similarity: they both stand out more for progressing the ball with dribbling than they do with passing. While Dest was 95th percentile in dribbles and 84th in progressive runs, Semedo was 83rd percentile in dribbles and 91st in progressive runs. Even Semedo’s biggest doubters can’t deny his strength in dribbling, particularly using his pace to burst past opponents. But unfortunately for the former Benfica man, Dest also possesses these qualities.

While it’s hard to deny that Semedo is the safer option of the two defensively, and a more adept ball winner at the moment, Dest’s numbers are still not that far off. Semedo makes just 0.09 more successful defensive actions per 90 and 0.94 more possession adjusted interceptions per 90, while Dest’s win rate on defensive duels is actually higher by 3.15%.

Ultimately, the numbers are on Dest’s side. They show that he can replicate Semedo’s greatest asset, his dribbling while providing much more offensive threat. Semedo probably has the upper hand defensively, but with how the game is played today, full-backs in a bigger side can provide the team with far more value in attack than they do in defense. It’s impossible to not look at these numbers and think of Dest as the better fit for Barça, but the question then becomes whether or not he would be able to replicate this performance if the move was actually made.

Even though many have made the move from Ajax to Barça in the past, and even though many have been very successful, there will always be reasonable doubt over whether a player can make the jump from the Eredivisie to La Liga. That is certainly true for Dest. In this past Champions League campaign, Valencia, who finished 9th in La Liga, finished top of their group, two spots ahead of Ajax who were sent to the Europa League. When Ajax got there, they were eliminated in their first tie by Getafe, who finished 8th in La Liga.

No matter which way you look at it, the quality of La Liga is much greater than that of the Eredivisie. At the top of the table, the European places, midtable, all the way to the bottom, teams in La Liga have more resources and more quality. Dest would be defending against better wingers and forwards, and trying to attack against better full-backs and centre-backs. Would he still thrive against this consistently higher-quality opposition?

An additional concern with him is his inexperience in general. The 2019/20 campaign was his first with any senior football, meaning he has less than 1,500 minutes of top flight experience under his belt. Sergiño Dest only added 585 additional minutes in European competition – 405 in the Champions League, 180 in the Europa League – and is still yet to experience a Champions League knockout tie, which he would definitely have to be ready for at Barcelona.

As a result of this inexperience, Sergiño Dest is still a very raw player, and far from a finished product. He still has issues in his game that need to be filtered out with coaching and experience. Things like defensive positioning, understanding when and where to be progressive, and when to be conservative, can still cause issues for Dest. This is completely understandable for any young player, but if the board is looking for an immediate solution at right-back, it may raise concerns. As for any potential signing without much experience, and from a weaker league, there are questions as to whether or not Dest’s performance will translate to the next level.

In the transfer market there are no guarantees, especially when looking for the caliber of player that Barcelona want at right-back, so why not take a chance on Sergiño Dest? We have just seen a certain Canadian full-back win the treble with Bayern Munich as one of their best players. Where was he before his move to Germany? Playing in the MLS, as a left winger, at just 18 years old.

The story of Alphonso Davies should serve as an example for Barça’s recruitment of the right-back position, and in general. The club forcing itself to buy established players for huge fees has led to far too many flops in recent years. Now, especially with the tight financial situation brought on by the pandemic, why not spend smart on a young player who has all the attributes that we want in our full-backs? Especially when most of those attributes are missing in our current options.

While Dest is far from a finished product, with the proper coaching and development he could undoubtedly become one of the best full-backs in football. He is incredibly confident and skillful on the ball, efficient with his passing, and contributes a great amount to his team’s attack. With those building blocks already in place, if he could just develop in a few areas of his game, everyone would look back after three, five, even ten years with his current youth, and think how much of a bargain he was.