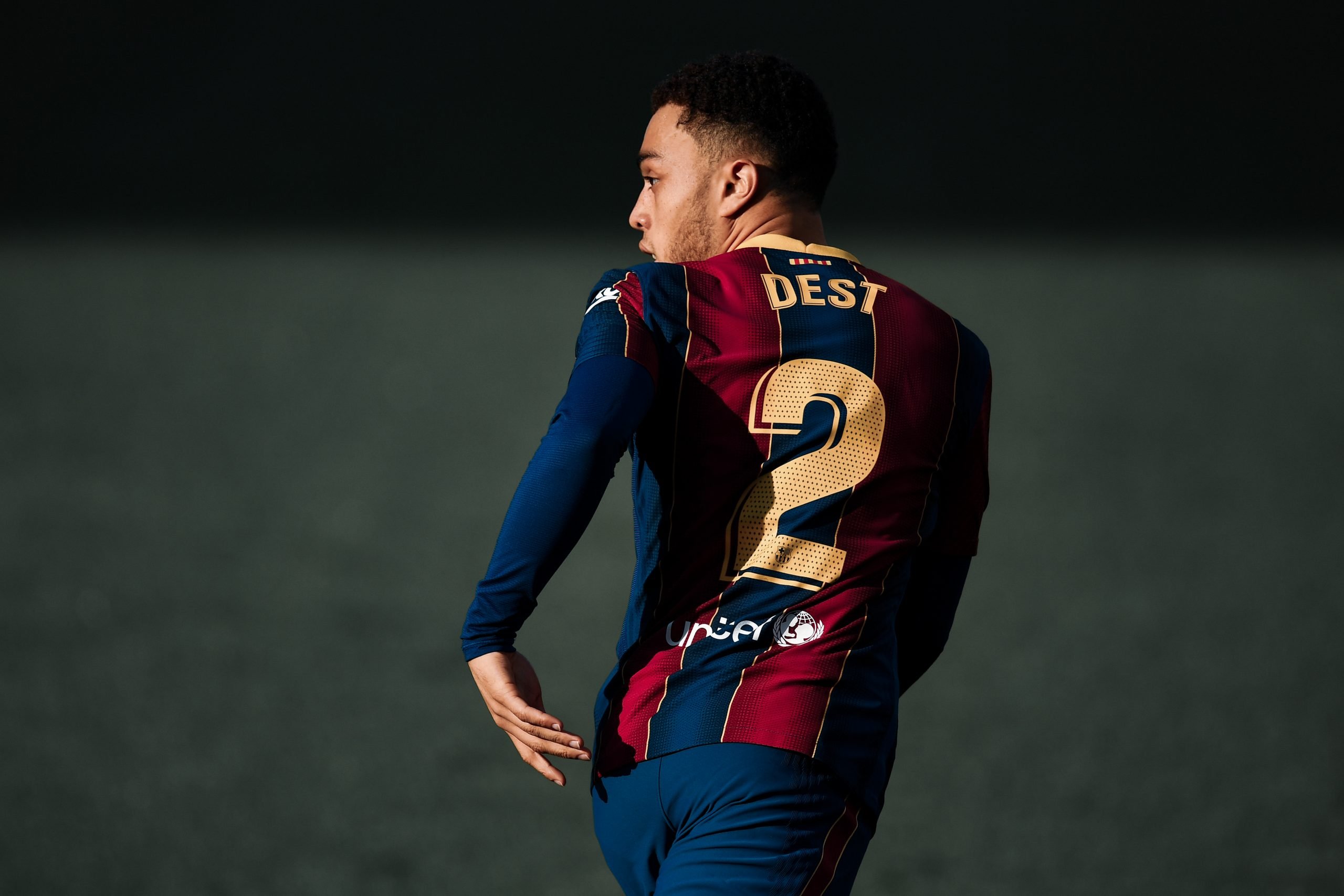 Brought to Barcelona from Ajax as Ronald Koeman’s solitary signing, Sergino Dest has revitalized hope that was long lost amongst Culés. The legacy that Dani Alves had left behind came with it a set of expectations that simply never came into fruition in any of those who dared stand where he stood.

Four years following his departure the legendary Brazilians from the Catalan Capital, Barcelona seem to have found their man in a 20-year-old American international. Should their expectations materialise into reality, they just might have cashed in on a potential world-beater.

Highly versatile in a multitude of roles, Sergi Roberto offers a different dimension to the right-back role with the calmness and composure that come with his background as a midfielder. Despite this, his lack of dexterity had resulted in him being rather ineffective when asked to perform certain tasks.

Nélson Semedo meanwhile was a workhorse that was more than capable of pacing up and down the wings, however, neither he could overcome, nor even get within touching distance of, the mountain of expectations set by his predecessor. He was lacking in nearly all fronts and checked barely any of the proverbial boxes that Barça needed him to.

In sharp contrast to the two, Sergiño Dest offers pace, dynamism, and brings with him an uncanny sense of decision making that was barely seen in either one of his forerunners. Like Pedri in midfield, the 20-year-old has managed to form a remarkable bond with Lionel Messi — as strongly advised by none other than Alves himself — however conversely to Jordi Alba, this relationship does not hinder him from linking up with other players in attacking positions.

This factor makes him significantly less predictable than others when storming to create chances up forward, however, the youngster adds more than just perfectly timed crosses into the right-wing.

Pivotal to his success as a right-back is an equanimity stemming from his early days as a street footballer from his teenage years. The quick-wittedness needed for this fast-paced, and limitedly spaced brand of football — along with his time at Ajax, of course — played a significant part in honing his dribbling skills and one-touch passing which to Barcelona, were a heaven-sent given their long term aspirations for both Dest, and their desired style of play.

The verticality in his play encompasses that of Roberto by a significant amount, and his roots as an Ajax player, as well as his own individual strengths, are to thank for this. Rather than seek the simpler, more horizontal, or regressive diagonal passes for the sake of maintaining possession, Dest makes a host of well-calculated risks that serve to provide positional as well as numerical superiorities once made.

Barcelona can further work in this specific regard, and cater to the Dest and with that the team’s directness by placing a natural right-winger ahead of the American. Dest already has a strong bond with Fransisco Trincao, and using both of them on the same wing together will only work wonders for the club as the two youngsters will combine and progress the ball further.

This is largely reminiscent of Dani Alves, who for a number of years was the undisputed best right-back in the world by his expertise in the same.

Of course, it is not only in the attacking third that he shines brighter than the competition, he has also made quite a name for himself in the defensive aspect of his game. While certainly not the best defender on the planet, Dest still manages to offer security that someone like Roberto could only dream to provide.

Look no further than his game against Real Madrid where, in an evening marred with disappointment on many fronts, Dest was one of the few bright spots on an otherwise gloomy game for Barcelona.

This is, in large part, thanks to the impeccable positioning and situational awareness garnered up through years of training in the physically, though arguably, more importantly, mentally demanding academy that is De Toekomst. Dutch legends Michael Reiziger and Winston Bogarde helped hone the defensive aspect to his game, and under Ronald Koeman, a man who won it all under Cruyff, he is sure to improve in this regard.

The foundation of the success of any individual regardless of the field is laid on a bedrock of introspection. One simply can not grow if they are not able to search for flaws within themselves and improve upon them as time goes on. Fortunately for Sergiño Dest, self and constructive criticism coupled with his aspirations to improve, are at the core of his rapid growth as a footballer.

“All the faults in my career have made me who I am. You have to make mistakes to succeed, and that’s the reason why I’m not scared to do anything or try anything, as if I make a mistake, I will learn from it.”

Sergino Dest in an interview with ESPN

Words like these are music to the ears of Barcelona supporters who grew tired of the overly pragmatic, desynchronized notes played by the distasteful orchestra of Roberto and Semedo. It matters not the formation, nor the players, nor the opposition; Dest will never waver, and will always strive to be and improve himself.

His proactive approach to games has earned him enormous respect and adoration from within the Barca camp, with many lauding his offensive nature and fearlessness blended seamlessly with his unruffled outlook to his defensive duties.

His eagerness to impress the manager, knowing well he is rivalled by Roberto, a largely infamous character within the fanbase for the one-dimensionality in his play, makes him always yearn to perform better than the only person he can control; himself. Such is the level of his improvement and evolution, that in the game against Real Valladolid, the American garnered up a total 1xA from five key passes in a picture-perfect night from him.

In reference to Johan Cruyff, every disadvantage has its advantage. Roberto’s injury presented itself as another reason for the fans to worry, however, all it did was bring forth a version of Dest they otherwise would possibly never have seen, and to many now, he has more than sealed his spot in the right-back position.

As per his altruism, Dest has shown on multiple occasions that he is more than willing to do anything, as long as the team requires it of him. Such is exemplified by his first outing as a Barça player in the left-back role deputising for an injured Jordi Alba, in the wings for the absent Ousmane Dembélé and as a makeshift centre-back in a solid defensive showing against the eternal rival, Real Madrid.

This team-first attitude, especially in a club with values like those of Barça, only serve to add to the supporters’ admiration of him, and deservedly so.

Despite his age, which is proving to be nothing more than a number given his proficiency in the role, Sergiño Dest is not only turning into more than just Barça’s ideal right-back, he is now also being championed as the paragon for what Jordi Alba should aspire to improve on.

Having amassed seven assists already this season, there are still some criticisms that Culés have of the Spaniard, which he is yet to rectify even years after them first being put into the spotlight.

Often lauded for his immaculate and seemingly telepathic understanding of Messi, what was once one of his greatest assets is now holding the team back. He relentlessly looks for the Argentine, even when common sense says otherwise. In complete contrast to his opposite fullback, Dest shows no preference on passing options once in the final third, as all he needs is a target man to whom he can feed a cross to.

Not only does this hasten the play, but it also increases his threat levels in the final third. The more that both search for passing options within the 18-yard box, the more potent Barça as a whole becomes over time. He already has double the goal contributions in less than a third of the time, now all it would take is diversification in his passing targets to more than just Messi.

Like Dest, Alba would need to take a deep look at himself and examine what it is that he is walking short on. Then, and only then, can he make the conscious decision, to change for the better.

Dest is precisely what Barcelona have waited what now seems like aeons for; a tactically astute right-back, both in the offensive and defensive aspects of his game and best of all, he cost them just €21 million. His remarkable attitude, coupled with his fierce spirit are stepping stones to his eventual growth as a footballer as, despite his current heights, his journey is surely far from over.

Such is his present skill and in-game awareness, that even the likes of Jordi Alba are being encouraged to take notes from him. It is astonishing just how much and how fast he has grown in these few years as a footballer, and all we can hope is that this remains an upward trend for years to come.