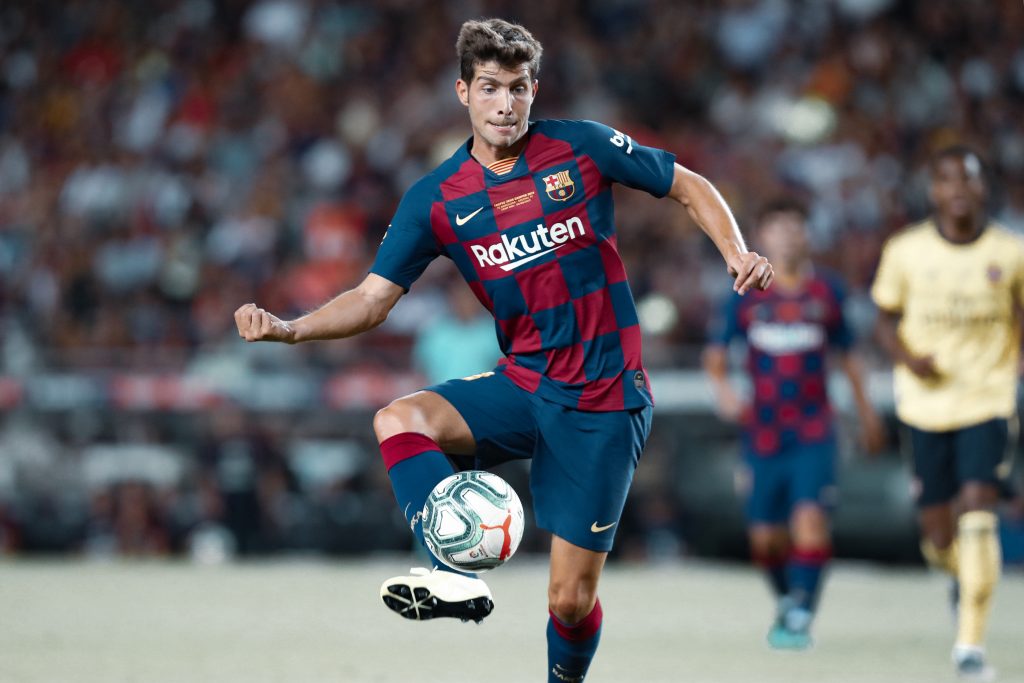 La Masía product Sergi Roberto has been an important player for Barcelona. His versatility has been a real asset to the team and shows how well he understands the game. But, with some rumours circulating about a possible transfer, should the board consider selling him if the right offer is made?

La Masía has been overlooked in recent years and Sergi Roberto is one of the last graduates to make an impact on the first team. His time at the club has been hugely successful and has seen him win every trophy available. He is a consistent performer for the Spanish champions and has played in a variety of positions. Now 28 year old, Sergi is one of the vice captains along with Sergio Busquets and Gerard Piqué. Recently, the Catalan has been linked to Manchester City and a reunion with Pep Guardiola. However, should the azulgranas be even considering selling Sergi?

The talents of Sergi Roberto

Sergi Roberto has been at the club since the age of 14. He made his debut for the first team at 18 and progressed patiently into having a more prominent role over the years. Originally playing the majority of his games as a midfielder, it was Luis Enrique that started to use Roberto as a right-back. Since then he has played mainly as a defender but occasionally returns to midfield or has been known to play as a winger. He has played 366 times for the blaugranas and scored 16 goals and provided 36 assists.

Pep Guardiola gave Sergi Roberto his debut in 2010, while Luis Enrique was who transformed him and made him a starter | Photo by Imago

The former La Masía player offers a lot to the team with his hard work and tireless running. Though he is not the quickest, he understands positioning as well as anyone in the team. Sergi can do this well both in midfield and in defence. He is strong at passing and comfortable with the ball at his feet. His attacking runs from right back help Barcelona to stretch teams and he offers runs from deep in behind the defence.

One of the greatest moments in Barça’s history is Sergi Roberto’s goal against Paris Saint-Germain in the so-called La Remontada in the 2017 Champions League round of 32. Barcelona needed a goal in the dying seconds to win the tie and complete the comeback. Neymar chipped a ball into the box and Roberto managed to get at the end of it and send the Barcelona through to the next stage. The flexible defender was a hero that night and will go down in the club’s history for that moment. Other less well-recognised moments include his surging run through the Real Madrid team from almost his own box that led to Lionel Messi’s winner in a 3–2 win at the Santiago Bernabéu in 2017.

Should Sergi be sold?

Recent reports suggest that Sergi could be open to leaving the Catalan side, only for Pep Guardiola though. Nevertheless, his preferred option is to stay at Barҫa as it is his home and his family are happy there. Although these reports are still speculation, how would the club actually benefit from selling their right-back?

One option might be to involve him in a trade deal with João Cancelo who also plays at right-back. Earlier reports had linked a swap deal between Nélson Semedo and Cancelo but these never materialised. Guardiola is known to be a fan of the Spaniard, who was handed his debut by Pep himself, so he could be tempted. But would João be a better option for Barcelona than Sergi Roberto?

Cancelo does have La Liga experience from his time at Valencia and is two years younger. With that said, Sergi is a solid performer for Barcelona. Also the club has struggled finding suitable full-backs that have really challenged Jordi Alba and Roberto for a starting position. Is the risk of selling the teams most dependable right-back what the club needs at the moment?

Another option is to sell the defender who is currently valued at £36 million by Transfermarket. This is a good price and with Barcelona short on money it could help fund other transfers. Notwithstanding, this means Semedo would have to be the starting full-back and he is yet to completely convince many culés. Furthermore, it would be debatable that there are any better right-backs in the market available for that price. As Sergi Roberto is Barcelona’s most consistent and versatile full-back, it would not be wise to sell him. His value to the team and the fact the club do not have the funds to replace him means he should remain in the blaugrana colours.