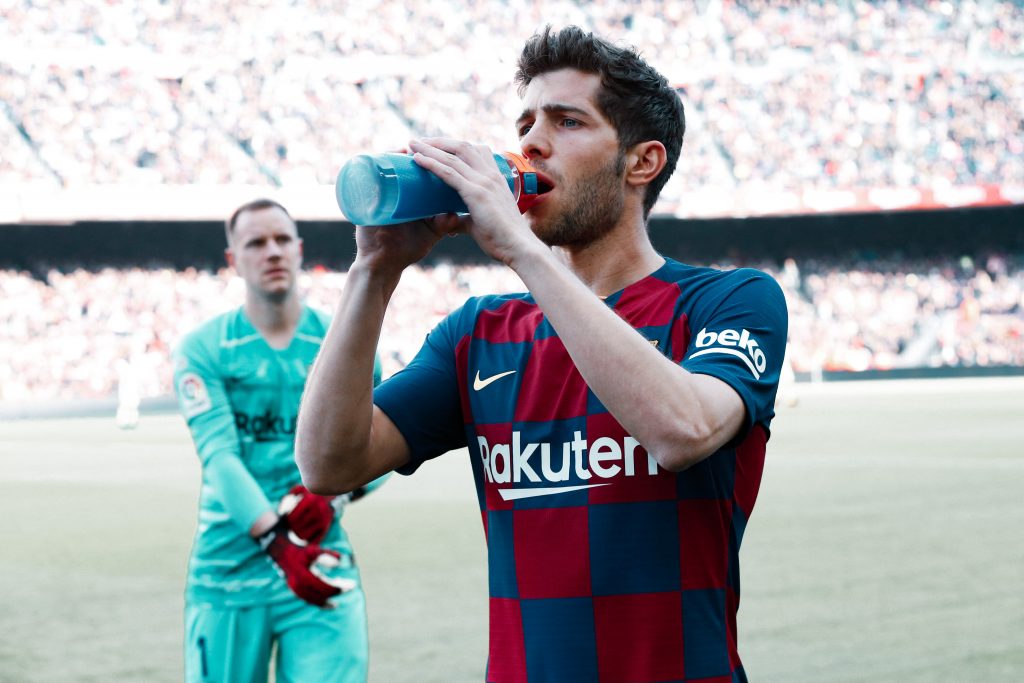 Barcelona got back to winning ways in a 1–4 thumping of in-form Villarreal. There were many positives to take from the game. But the one person who deserved massive praise for standing out in midfield was Sergi Roberto.

On Sunday, in the visit from Barcelona to Villarreal, when the line-ups for the fixture were announced, culés were left in a confused state. The inclusion of Sergi Roberto in midfield made absolutely no sense to them when youngster Riqui Puig was doing impressively well. However, what followed was 90 minutes of absolutely firm and resolute performance from the Spaniard. It was Sergi’s first start since he suffered a fractured rib against Leganés.

For a long time, the 28-year-old has been lauded for his versatility. Be it right-back or central midfield, Sergi Roberto always puts a shift in that position. Nonetheless, in the fans’ opinions, he is a jack of all trades but a master of none. As Puig has been doing fabulously well since Quique Setién has given him an opportunity, starting Sergi Roberto in midfield ahead of him didn’t go well with the supporters. Notably, while playing a team that’s doing very well, one would expect Setién to go with players who are in form.

Notwithstanding, Villarreal proved to be a less challenging task than expected. The Yellow Submarine is chasing a berth in next year’s Champions League. And so, they were tipped to turn up against the Catalans. But Setién’s men were ready for the match. From the very first whistle, they were in complete control. One of the players who received massive praise for pitching in an excellent and professional display was Roberto.

Sergi Roberto’s role in the game

As we all know, Quique Setién was put under the microscope for his handling of Antoine Griezmann against Atlético de Madrid. To incorporate the Frenchman, the manager went with a 4–4–2 diamond. Sergi was responsible for providing an equalling number at the centre of the pitch. Villarreal went with a 4–4–2 that had a double pivot of two sturdy defensive midfielders. Thus, Sergi Roberto was deployed on the sides of Barça’s diamond midfield to provide stability and control and generate numerical superiorities.

Sergi Roberto excelled both in midfield and at right-back, where he would have recorded an assist to Lionel Messi had it not been for a previous offside position from Arturo Vidal | Photo by José Jordán / AFP via Getty Images

As expected, he didn’t have the most glittering performances. Instead, he did what he was told to do. With a pass accuracy of 97.7% and a total of 95 touches, Roberto had a calm and controlled impact on the pitch. He carried the ball for a total of 311 yards and was one of the most progressive players on the pitch. Furthermore, in the entirety of the match, he was dispossessed only once.

Defensively, he was more involved in pressing down the middle. The Catalans gave no time for the hosts to build with the ball. Sergi Roberto was crucial in ensuring that Villarreal’s midfield wasn’t given enough space to work its way upwards with the ball. Instead of tracking back and making tackles, the attacking threat was halted at the centre of the pitch.

There’s no way that the diamond would have worked without a player doing the tireless legwork. Even Quique Setién was appreciative of the shift the La Masía graduate put in.

“He was spectacular. He came with positive and renewed energy after that injury. I’ve told him that he has to be versatile. He does it well. He always does it to perfection”

The fans, the coach, and even Roberto were pleased with the role he was given and the subsequent exhibition. The outing against Villarreal was one of the most satisfactory displays that Barcelona have showed collectively since the restart. Since the dominant performance against RCD Mallorca, this was the first away game where there was control from the start till the end.

The likelihood of Quique continuing with this tactical approach is high. The incorporation of Antoine Griezmann was helped with the settling in of Sergi into the role he was given. The 61-year-old tactician seems to finally be finding the correct combination for his starting XI.

“Tactically, it has been a while since I played there. Sometimes I play central midfield but on the right, and today I was on the left side, where I am most comfortable. It’s where I played for Barça B.

I enjoyed it, I had a lot of fun, with space and focused on the opposition’s defence. It’s a shame I had to go back to right-back [late on] but I am happy to help the team playing wherever”

Sergi Roberto
on his new role

It will be interesting to see if the same approach is applied for the upcoming games. With the blaugranas hosting rock bottom RCD Espanyol on Wednesday, a dominant performance is mandatory. With Sergi Roberto bringing a more calming presence to the midfield, there is no reason why Setién should alter his role. The versatility of Sergi is something that should be appreciated a lot more than it is.

Be it right-back, or central midfield, Sergi Roberto always gives his 100%, shifting from both positions with ease. He might not be the most technically astute player, but he understands the Barcelona way to the fullest. It will be interesting to see what the formation and tactics are when Frenkie de Jong returns from injury. To incorporate Lionel Messi, Luis Suárez and Antoine Griezmann, only a diamond-shaped 4–4–2 seems to be the likely solution. But the midfield at the heart of the pitch is critical, and Sergi Roberto appears to have found his best role under Setién.