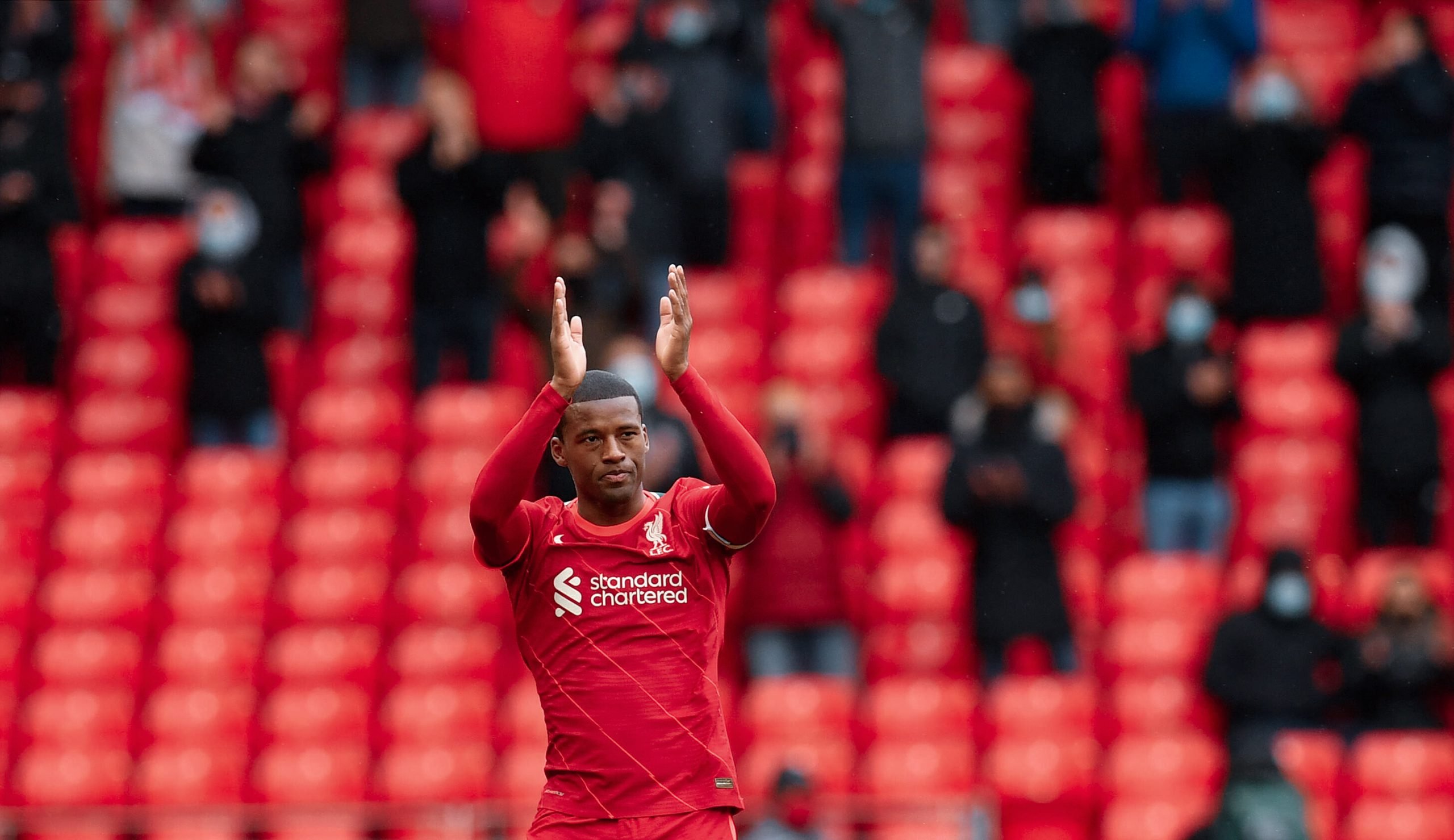 Like a lightning bolt in the middle of a sunny day, the news of Geoginio Wijnaldum to Barcelona has shaken up the media and fans alike. An extensively debated transfer rumour in the last window seemed to be off the table and out of consideration. However, it has picked up once again and at some pace.

According to reliable outlets like de Telegraaf and Fabrizio Romano, Wijnaldum to Barcelona is a done deal. The player will sign for the Catalans on a free transfer before the Euros and will command a salary similar to Sergio Aguero’s.

The news has been taken with a pinch of salt by fans around the world. The history between Barcelona and Wijnaldum is not pleasant. The Liverpool number ‘5’ scored twice at Anfield in the 4-0 Champions League debacle, an incident that pricks the heart of Culès to this day. However, for the sake of analysing the news of his arrival in Catalonia, let’s temporarily do away with personal agendas. With the deal all but done, here is an overview of what the Dutchman can bring to Barcelona.

What he can bring to Barcelona

Over the years, Georginio ‘Gini’ Wijnaldum has proven to be one of the most reliable cogs in Liverpool’s midfield. The Dutchman has been a vital part of the Reds’ Premier League winning run and their Champions League triumph. Jurgen Klopp’s endless admiration for the 30-year old is a testament to his contribution. The Liverpool boss was very emotional when the player announced his decision to leave.

Wijnaldum is not a traditional Barcelona midfielder, and it would be wrong to expect so. His versatility however is incredible. He has proven to be a solid player when deployed as centre-back, though his primary success has been in the middle of the park.

Playing in a system where the fullbacks have been the primary source of attacks, the Dutchman’s role has been largely limited to a more physical game. No, Wijnaldum is not the player to deliver magical through balls or break lines with his vision, however, his stamina is unparalleled, and his defensive stability has been vital for Jurgen Klopp’s gegenpress at Liverpool.

Though the midfielder was known for his goal-scoring contributions and his role as an attacking midfielder during his tenure at Newcastle, his move to Liverpool brought a cascade of changes in his game. He is now known predominantly for his impeccable displays right in front of the defenders.

Playing as a deep pivot, he has held the fort and kept opposition threats at bay time and time again. In the 2020-21 Premier League, the midfielder recorded 24 successful tackles of a possible 30. His presence was more marked in the middle third of the park, with over 16 tackles coming from the region.

Barcelona’s lack of physicality has come to haunt them multiple times this season. In many of the big games where the Catalans failed to win, their midfield was physically outdone. The El Clasico, decisive clashes against Atletico Madrid and the defeat to Paris Saint-Germain are games that stand out as examples, leaving aside the team crumbling at the tail end of the season.

Wijnaldum can provide a lot more stability to close out games and make sure those things don’t happen again. In his last league campaign, he averaged over 13 pressures per 90, of which over 35% (five pressures per game) have been successful. His presence in the middle third is daunting, and his work rate unparalleled.

Wijnaldum is a tactically astute player who can fit into a plethora of roles. He has a repertoire that very few can boast of. In addition to his defensive abilities highlighted above, Gini can be a constant nuisance to opposition defences when deployed higher up. His ability to make late runs into the box and come up with clutch goals out of nowhere is a valuable tool.

This is justified by his statistics in the Dutch national team, where he plays a more advanced position. For his country, he averaged four shots per 90, with two-third being on target. Of his 14 shots on target, Gini scored seven last year.

At Barcelona, one would expect him to play more in a deeper position. The arrival of Sergio Aguero and Memphis Depay more than cover up for the stuttering attack. Wijnaldum will come into the side and try to replicate his Liverpool success at the same position. He could be used either in place of or alongside Sergio Busquets based on the tactical approach. Furthermore, he can also play in front of Busquets as a box-to-box midfielder.

One must know that Wijnaldum is not a player that provides a creative outlet. Nevertheless, he can effectively neutralise the threat of counters with his calm defensive presence. Given his experience covering for an attacking fullback in Trent Alexander Arnold, he could give Jordi Alba more freedom in attack by taking on defensive responsibilities. With Miralem Pjanic and Philippe Coutinho’s departures all but certain, there is certainly a place for the Premier League star.

Barcelona do not have many experienced options to cover for Sergio Busquets defensive role. Frenkie de jong, though signed for it, has proven that his future lies as an interior. Pedri, too is not a player of that profile. The young La Masia talents- Nico and Jandro, are too inexperienced to take on the burden regularly. Ilaix Moriba is also a ways away from fully breaking through to the first team.

While it is undoubtedly crucial that the progression of these youngsters is not hindered, an experienced option who knows the business cannot hurt- especially for the big games where his experience could prove vital. Given that Wijnaldum will sign for free and for a relatively low wage is always a bonus. A free transfer always carries lower risk. Moreover, his understanding with compatriot Frenkie de Jong will be a bonus.

Players capable of diverse profiles cannot harm the tactical repertoire despite not having the ‘Barça DNA’. The signing wouldn’t necessarily be a bad idea because there will always be games that necessitate such profiles. And if his signing at a low wage facilitates the exits of higher earners, it may not be a mistake at all.

Irrespective of the numerous assets he can provide the side with, it remains a fact that his signing was unnecessary. As a consequence of his signing, there will be a drastic drop in minutes for players like Ilaix Moriba. Moreover, he is not a player cut out for the so-called Barcelona mould. It would be a similar approach as the previous board’s moves for Ivan Rakitic or Arturo Vidal.

The signing may not be as bad an idea as is advocated by many. However, it could be done amidst more clarity and certainty. With Ronald Koeman’s future, itself clouded by uncertainty, bringing in players on his wishlist in such haste seems uncalled for. A new coach may have new ideas that do not resonate with Gini’s profile, and the move could be similar to another Miralem Pjanic transfer.

Also, with him already having touched the 30-year mark, it is the beginning of his slow decline. Signing a player of that age on a three-year deal seems unnecessary. Committing with a player till the age of 33 without any idea of his longevity or compatibility is an odd step. Although also a free transfer like Sergio Aguero and potentially Memphis Depay’s, the midfield is not a position that needs immediate reinforcement, while both forwards are at least stop-gap solutions to immediate problems in attack.

Joan Laporta’s plan of a rebuild and a long term project does not advocate moves like this. Certainly, Wijnaldum cannot be the centre of any long term project. However, framing opinions on the new president so early on may not be the right way to go.

Having taken office amid a massive financial crisis, Joan Laporta does not have too many options other than going for the free agents. Gini’s arrival may facilitate the exits of players on fat pay-cheques without compromising on the bench quality. Moreover, on a tactical level too, having an experienced player of his profile and the approval of Klopp cannot be a downgrade.

However, it remains to see what will happen of Koeman’s job for it is a major factor contributing to the potential success of the transfer. There are the pros, and then the list of cons. However, jumping to conclusions at this point seems premature. If indeed he has signed as a Barcelona player, one hopes he can reinforce the physically meek midfield and add to its quality. The opinions may be framed after he makes his debut.