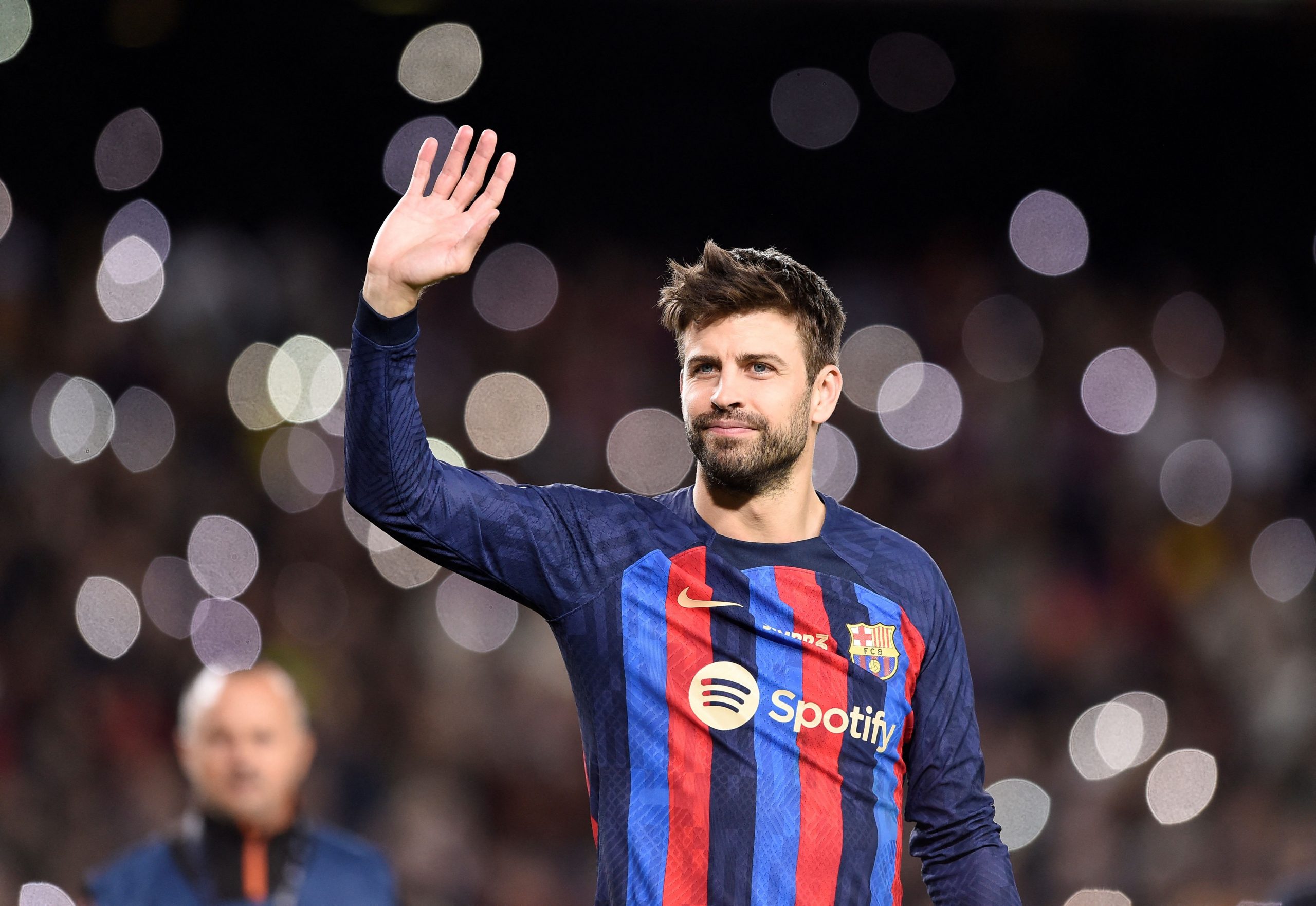 Symbols have a special place in our world. They represent good and bad, and ominous and auspicious things alike. Symbols provide quick access to meaning, not to mention often holding more than the things they represent.

Yes, we think of symbols as primarily being objects, but more often than not, people take on these roles too. Think of your favourite musician or actor, what do they symbolize? It could be anything from the days you spent listening to them in your youth, or the times you watched their movies as a mature adult.

The same applies to athletes; they may symbolize the teams they play for, but the best go beyond that. As a teary-eyed Gerard Pique left the Camp Nou for the final time, one cannot help but think of his legacy.

After 616 appearances, 36 trophies, and two La Manitas, what does Pique leave behind, and what does he symbolize for Spanish football, Barcelona, and the sport as a whole?

Here’s the story and legacy of Pique, a player that means more to Barcelona – and culés – than we realize.

Pique’s illustrious career at Barca started in La Masia, where he played from as young as ten years old. But, when the time for promotion to the senior side came, he opted for a move to Manchester United.

Under Sir Alex Ferguson, Pique won the Premier League and Champions League, amongst various domestic cups. It was an overall successful spell for the young Spaniard, who was developing well under the bright lights of Old Trafford.

Nevertheless, he lacked a path to consistent playing time, given the dominance of centre-backs Nemanja Vidic and Rio Ferdinand.

As such, he returned to his boyhood club in the summer of 2008, marking one of Pep Guardiola’s first transfers as a manager.

Pique was an instant success – a rare feat for a young centre-back. He made 45 appearances in his first season, including starting the Champions League final against Manchester United, which the Catalans won 2-0.

As the 2009/10 season came, he took over the starting centre-back job alongside Carles Puyol. In their few seasons together, they represented an envied mix of power and finesse and would go on to lead Barcelona to a plethora of trophies, including another Champions League in 2011.

On the national level, Pique made his first appearance for Spain in 2009, and was an integral part of the most successful era in La Roja history, winning the Euros and World Cup back-to-back.

While he missed out on the Euro 2008 victory, he and Puyol were starting centre-backs throughout the 2010 World Cup. He also started alongside Sergio Ramos throughout Euro 2012 – playing every single minute in the tournament.

Back at Barcelona, as Carles Puyol left the starting eleven in 2012, Pique was thrust forward in importance and responsibility. He became a leader in the backline, and while never completely free of errors, he was an example.

Not long into his footballing career, Pique became a symbol of success. He was synonymous with both Spain and Barcelona’s greatest runs. On the pitch, he was a symbol of an elite modern centre-back, one who could expertly dispossess opponents and quickly lead attacks with line-breaking passes and smooth on-the-ball play.

Further, he was a symbol for those La Masia players who give Barcelona another shot. But more than merely a symbol, he’s the ideal.

Not everyone succeeds coming back when to the Camp Nou, – think of Denis Suarez, Gerard Deulofeu, and currently, Hector Bellerin. Others only achieve fair success, like Cesc Fabregas. Now, Eric Garcia hopes to carry on that mantle.

Still, like with any player, a legacy comes with both highs and lows. For Pique, that is especially the case. After the highs of the first half of his career, further propelled by another treble win in 2015, Pique was at the centre of a flailing Barça side.

He and a dilapidated backline were at the forefront of harsh losses against Roma, Liverpool, and Bayern Munich, not to mention having a series of faulty moments against PSG, and, most recently, Inter Milan.

Despite the lows of Anfield and others, it’s unfair to place so much blame on one player’s shoulders. Those were ultimately team losses. So, should we remember Pique any less for those results?

Is he correctly symbolized as a vaca sagrada, a player that represented everything wrong with Barcelona’s squad? No, not at all. No one’s career finishes without some tribulations; it just so happens Pique experienced the highest of highs and (relatively) lowest of lows.

Off-the-pitch, the Spaniard was never far from controversy, but, to his credit, he never let these fiery incidents dampen his performances – significantly, that is.

In 2017, Pique founded Kosmos, a conglomerate that dabbles in sports and media ownership, entrepreneurship, and investment, leading many to argue he was distracted from football. He was also adamant about his desire to be Barcelona’s president in the future.

After the 8-2 loss to Bayern in 2020, el Presidente infamously said, “If we need new blood, I’ll be the first to go.” That statement followed him like a curse, with each poor performance resulting in the quotes being spammed all over social media.

Furthermore, when Lionel Messi left the club in the summer of 2021, journalists reported a rift between Pique and the Argentine; that did not help with standing with the Blaugrana faithful.

Geri always promised to leave, just with the caveat of when the team truly did not need him. Thus, as culés eagerly awaited his departure, he persisted and proved his post-match comments against Bayern true.

Sure, his recent performance against Inter Milan was appalling, but he was perhaps Barcelona’s best centre-back last season. Additionally, the only reason he played against Inter was due to injuries of Ronald Araujo, Jules Kounde, and Andreas Christensen.

In 2020/21, he was dominant-as-ever in the team’s Copa del Rey run – Barça’s last trophy. Who can forget his 90th-minute equalizer against Sevilla, or the way he contained Inaki Williams in the final?

His legacy may have taken a hit, but nobody should not forget all the stability, class, and solidity he’s given Barcelona for almost 15 years.

At the end of the day, Pique is retiring on his own terms. It comes out of nowhere – in the middle of the season – but it’s a decision he always said he will make.

He can realistically start for a plethora of teams across Europe, but he knows he would not be at his best, and most importantly, he always wanted to finish his career with the Blaugrana.

When Pique came back to Barcelona in 2008, he arrived in a team full of vibrancy and youth. He made a name for himself, forming the backline of some of the greatest teams the sport has ever seen: the Spain sides from 2010-2012, and Barcelona in 2008, 2011, and 2015. Now, he steps aside, leaving room for the next generation to make history.

On an individual level, Pique holds four appearances in the FIFA World XI, five in the UEFA Team of the Year, a place in the Euro 2012 Team of the Tournament, over 100 caps for Spain, and is one of the most decorated players in football history.

Pique should be remembered for all that he is, a bright and jovial character who was always a joy to watch, an era-defining player who was one of the best of his generation, and a businessman who showed how far athletes could go.

Following the 4-0 victory against Real Madrid last April, Pique tweeted, “We are back.” Barça may have stumbled a bit since then, but he himself is truly back where he belongs, in the hearts of all culés.

Fans remember hiim for being there in Barça’s best times, and worst times, forever binding him to Barcelona’s history and our memories as fans.

For younger fans, El Presidente represents one of the first players from Barça’s team; he also leaves Sergio Busquets as the last player in the team who started in the iconic 2011 Champions League Final.

Simply put, the club won’t be the same without Pique. His legacy will be a mixed one for many, but that’s why we love him. After all, one-dimensional symbols are boring, and without a doubt, Barcelona has lost a bit of its soul.

As Pique himself said, “Sometimes, loving is also leaving.” While he moves on to the next chapter of his life, we’ll cherish this past one forever.

Gracias por todo, Piqué, and hopefully, we will see you in the President’s stands soon.