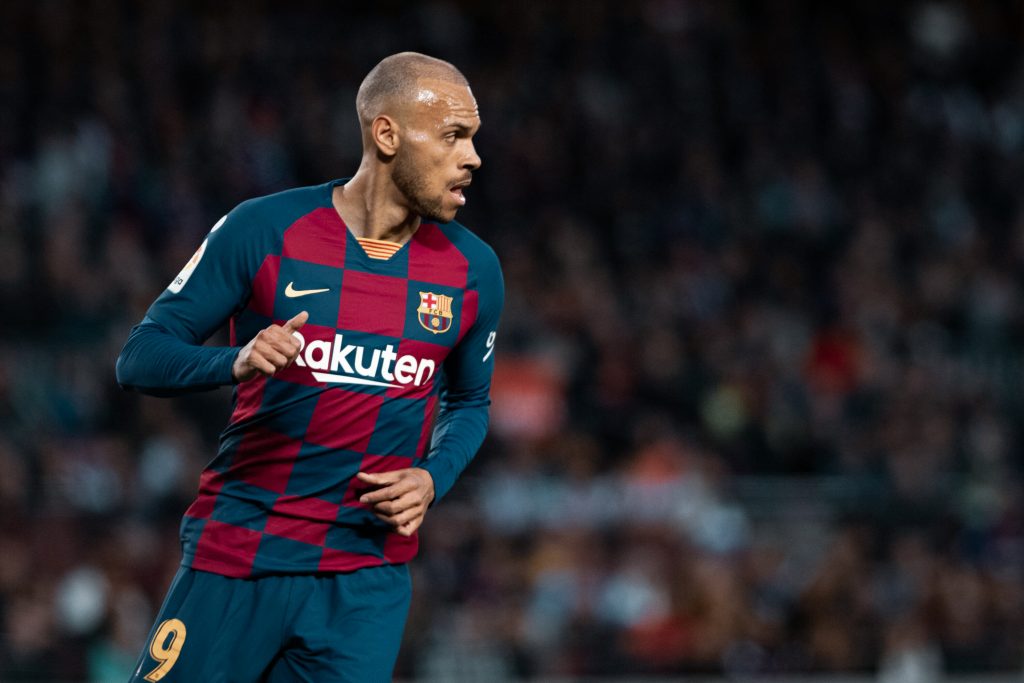 Discipline and self-confidence, two of the keys that have helped Martin Braithwaite, who is training three times harder than normal in his team, go from Leganés to Barcelona without disappointing.

When you don’t have the talent of the great, you need to make up for it in some way. When your technical quality hasn’t placed you among the best, other factors could. It can be intelligence, it can be hard work, it can be mentality. In Martin Braithwaite’s case, it’s a combination of all of these. Conscious of certain limitations that seemed to be only enough for minor sides, he has held on to any possible factor to raise his ceiling and become a valuable piece for a club of the stature of nothing less than Barcelona.

After some spectacular years at Toulouse followed by a less successful spell at Middlesbrough, Braithwaite seemed to have found his place at Leganés. One of the key figures in a team in a league of the dimension of La Liga, and saving them several points in the Pepineros‘ own battles. At Toulouse and Leganés he was great, yet no one would have imagined that he would be able to suddenly make the leap to Barça. Of course, one could argue that there was a strong luck factor in that transfer. The injuries of Dembélé and Suárez, the exit of Carles Pérez, and the possibility to make an emergency signing in February by the blaugranas. Admittedly, Martin was bought, but it could have perfectly been someone like Ángel Rodríguez, Willian José, Loren Morón or Lucas Pérez.

But, while arriving to Barcelona is tough as fortune always takes a big part in it, what’s hardest is to prove to have the level to play for the culés. In fact, Braithwaite, who was good with Lega, has not looked out of place at any moment at the Camp Nou. Quite the opposite, actually, as in his three games in blue and red he has already shown that he’s a footballer the squad needed a long time ago. To be more accurate, it has not even been three games for Barça: two cameo appearances against Eibar and Real Madrid, and an impressive first start and 89 minutes versus Real Sociedad. In total, 128 minutes, but these have been enough to demonstrate that he could even be missed in this season’s Champions League. And that he could perfectly be staying in Catalonia for longer.

❛ I’m sure I’ll stay for more than four and a half years at Barça. That’s how I see it in my head ❜

In his latest interviews, Braithwaite has shown a degree of self-confidence, passion and professionalism few times seen before, more so for a guy with his trajectory. Or perhaps, and most likely, this self-confidence is what has allowed him to have this surprising later stage of his trajectory. His words to the Danish public television DR prove this. “Barça’s plan is only a third part of my training, because I have added a lot more to it. I exercise my speed and stamina. I’m training much more thoroughly now than before, so I’ll be back in much better physical shape”. More than a setback given his great form, this break could even benefit Martin.

❛ Dembélé and Semedo are the fastest players in the squad. Braithwaite is also very fast ❜

“I have to be a starter and a goalscorer. When you play for Barcelona you have a lot of opportunities, so there is no doubt that I see myself scoring a lot of goals and being one of the top scorers in the team and in La Liga. That’s why I’m here”. Hard work which, he’s convinced, “will have a huge reward”. “Now there is a break, I see it as an advantage. I know there’s no one who trains and works as I do. When I come back I will be ready physically and mentally”, he continued. For him, this hiatus of activity is not dramatic for his shape. Even he described the possible returns from injury of Suárez and Dembélé as “fantastic”, as competition will make him better. “I feel I’ve done well, but I know I can do even better”.

❛ Was signing for Barça moving out of my comfort zone? In some ways, yes. But that’s not what I fear. I came here for a challenge. Be smart. It’s the key to success ❜

His former coach at Toulouse, Pascal Dupraz, said to Le Parisien back in February when the move to Barça was made official: “I’m neither surprised nor worried for him. Martin has always had high ambitions. By that time, he already told to me that he wanted to play for the biggest clubs in the world. Perhaps he needs to set unachievable objectives, because he ends up achieving them”. In so little time at Barcelona the 28-year-old has already proved that he could be very useful for Setién, thanks to his direct and intelligent movements, his explosive quality, his determination and positional understanding. And his work ethic and self-confidence. Prepare yourself for Martin Braithwaite once football is back.