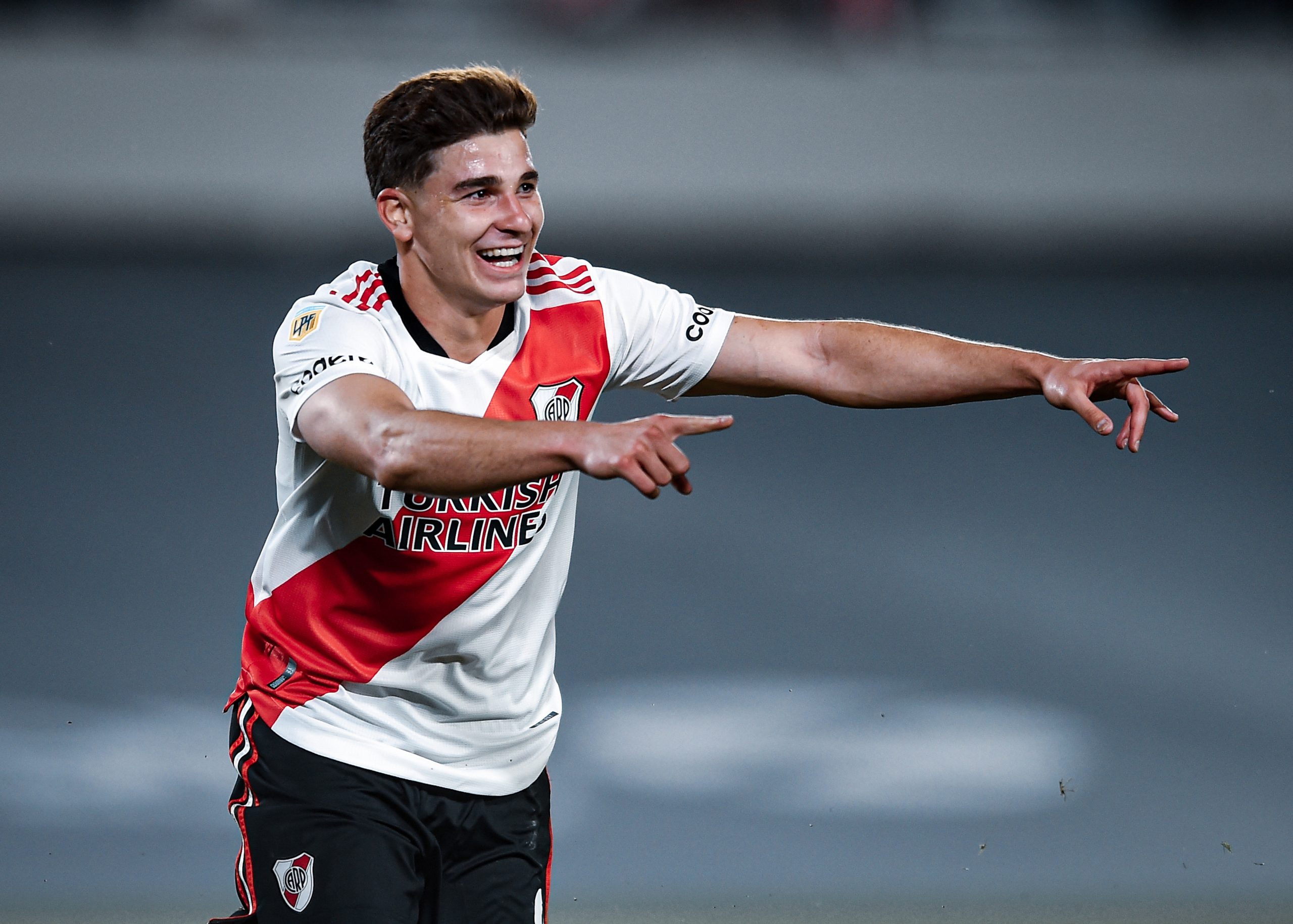 The newest name circulating throughout Barcelona’s transfer rumours is that of Julian Alvarez. The 21-year-old forward has burst onto the scene in 2021 – lighting up the Argentine Primera Division, leading River Plate to the top of the table, and earning his first caps for the Argentine national team.

With a league-leading 18 goals, six assists, and strong underlying numbers, Alvarez is undoubtedly a star. However, Barça has always pursued and signed talented attackers, with many of them ultimately being unsuccessful. This is why the club must have a true vision of Alvarez’ tactical fit.

The main factors to consider here are the Argentine’s playstyle, the potential difficulties he might face in his transition to European football, and if he could be utilised appropriately in the Barça system.

One of the first things that stand out with Alvarez is his ball-orientated positioning. In Marcelo Gallardo’s River Plate side, the 21-year-old has been given license to roam freely across the pitch. His heatmap this season reflects this, showing activity from sideline to sideline.

This is not due to simply alternating between positions, either. He just generally travels with the ball. Vertically, he tends to operate between the opposition’s midfield and defensive lines.

Upon receiving possession in these areas, Alvarez likes to get the ball out of his feet quickly with layoffs and wall passes. This adds an interesting wrinkle to his game; despite constantly positioning himself around the ball, he is not necessarily ball-dominant in terms of eating up touches.

Some of these qualities actually show a bit of similarity between Alvarez and Pedri in the Barça squad. However, whereas the Spaniard is an advanced eight in possession whose positioning tends to be very refined around the left half-space, Alvarez is more of a false nine or very attacking ten who roams all over.

His role at RP is one that gets the most out of the Argentine’s abilities, too. It does, though, raise some significant questions for a club looking to sign the 21-year-old. How many top sides can build a system around a player like that? And can Barça do it?

More question marks come up when looking into the physical side of Alvarez’s game. Quite simply, the no. 9 lacks elite physical attributes across the board. He is certainly not slow or feeble but lies somewhere around the average range, which holds him back in some key areas.

It is already apparent that Alvarez lacks elite acceleration, which raises concerns about his ability to burst away from pressure against European opponents who are better physically and mentally.

A player’s physical attributes also play a prominent role in their tactical fit. For instance, Alvarez does not stretch the opposition backline or pin their centre backs effectively. When the Argentine attempts the occasional channel run, he is often unable to create separation or muscle off the defender. See the example below against Boca Juniors.

The defender is able to stay with Alvarez relatively effortlessly and is given an uncomplicated chance to win the ball after the attacker tries to cut back away from the goal.

His undeveloped penalty area movement make matters worse. In addition to the fact that his expected goals tally is significantly lower than his actual goal tally, a lot of the high-quality chances he does get come from open, transitional situations where the ball ends up falling to him as the free man. When tasked with actually losing a marker in the box, though, he struggles.

Due to the same, it is fair to rule out the use of Alvarez as a solitary centre forward, and he also does not provide much in terms of dynamic outside-to-inside runs. The only real movement in his repertoire at this point is a straight check towards the ball.

Thus, it would be best if you had other players around the 21-year-old who can work off the ball to stretch or destabilize the opposition defence. To be fair, this is the case for many great players, but it is necessary to think about how many of those profiles Barça already have.

For more of the stronger sides of Alvarez’ game, let us turn to his technical attributes. For starters, the River Plate forward’s ability to move the ball away from pressure with short combination passes or a few quick touches is emphatic.

In general, he is much more of a space-creating dribbler than an explosive take-on threat. He is able to take a touch or two to the side of an incoming defender to open a passing angle. Still, he rarely drives hard at a defender for a one-on-one situation like Abde Ezzalzouli or Ousmane Dembele.

Alvarez is comfortable carrying the ball in open space and can occasionally show this off when he senses a lack of pressure upon receiving a pass.

In the play below, there is no defender tightly marking the 21-year-old as he receives the ball between the lines.

He is then able to turn and drive into the penalty area, though he does eventually lose possession.

On the creative side, Alvarez shows promise with his lofted crossing. Perhaps surprisingly, a lot of his creativity comes from crosses or cutbacks after he drifts into wider areas, as opposed to incisive, defence-splitting through balls.

When it comes to finishing, Alvarez is usually given the license to shoot on sight in the attacking third. However, his ability to generate power from a distance is not elite – as some would call it. Consequently, there is a host of poor decision making on his part, where he will stop an attack to loft a low-probability effort over the net.

Closer to goal, though, there is more reason to be excited about the 21-year-old. Alvarez is comfortable finishing with both feet, which gives him a greater variety of approach angles and finish types from a given location.

Would he fit at Barça?

Now for the driving factor behind all of this; whether or not Alvarez could actually slot into this Barcelona team. The short answer — not really.

His profile is one that requires a tailor-made environment to thrive, and his level of talent does not warrant trying to recreate this environment with Barça’s current squad.

If you try to play him as the centre forward, the side’s current issues with a lack of runs and destabilization of the defensive line would persist. The same would happen with Alvarez as a winger.

Plus, with how Xavi has been stretching the wingers ultra-wide recently, it is hard to see how Álvarez would provide any real value as a dribbling threat.

Even if you consider a system change with two runners on the wings and Alvarez as a false nine, it does not really work. While it would positively get more out of his between-the-lines proficiency, he is not a creator in the same sense as someone like Lionel Messi.

Alvarez would not be the guy to spray through balls between defenders for these runners. If anything, Memphis could be much more effective in that role.

Lastly, there is no real possibility that the River Plate academy graduate could be used as an interior in midfield. He does not possess the engine, passing range, or 360-degree awareness to take a spot in Barça’s crowded (and talented) midfield.

It may sound harsh, but the kind of role Alvarez needs in order to flourish truly is the one he is currently playing for River Plate. He needs a true centre forward ahead of him. He needs the freedom to drift. He needs players who are more dynamic off the ball.

Again, this is not to say that Alvarez is not a very talented player. For an attacker to succeed at Barça, though, talent is only half the battle. The club can not continue to repeat its mistakes of signing players based on reputation or pure talent and production. It can not continue to bring in players whose strengths are already accounted for and whose preferred areas are already occupied.

With all of this in mind, Alvarez does not seem like a target that the club should be prioritizing. He is a starlet, but not one who can simply be dropped into any side. A European club signing the Argentine would have an intriguing puzzle to solve. Right now, that is the last thing that Barça need.