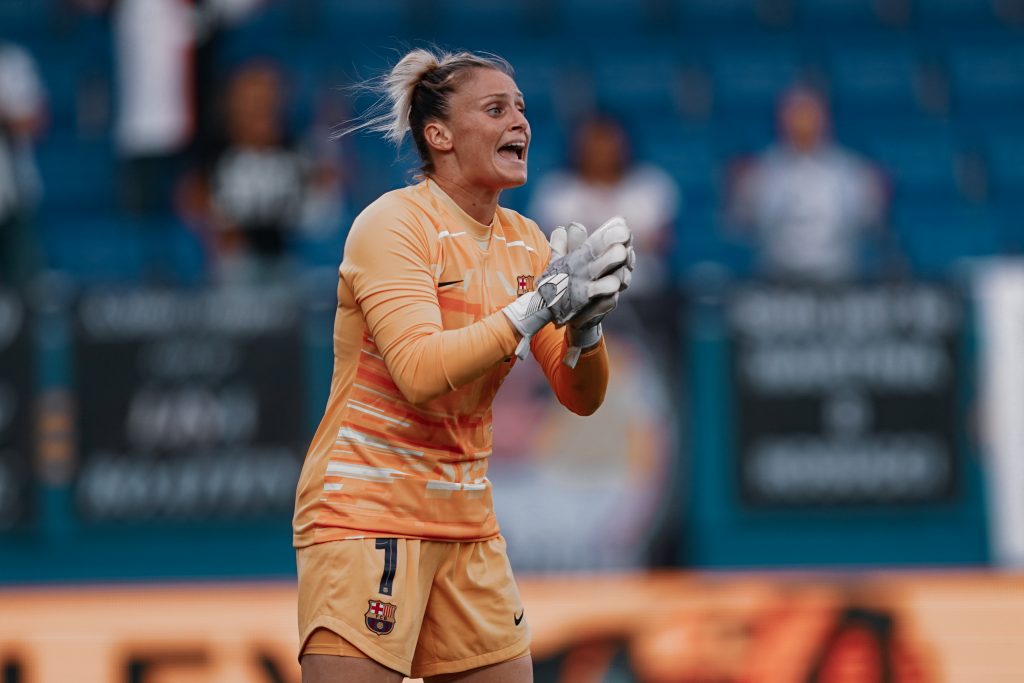 With the league season coming to an end prematurely, the unbeatable keeper of Barça Femení Sandra Paños has fully earned her fourth Zamora trophy.

An impassable wall guards the sticks of Lluís Cortés’ Barça Femení. Unquestionable on and off the field, Sandra Paños guards the Barcelona goal with safety. The 27-year-old raises her hands to consolidate herself, without debate, as one of the best goalkeepers in women’s football. Despite presenting fine figures in each season, her club has settled for runner-up for four consecutive years. Concentrated with a hunger for more, the Alicante-born keeper wants theleague title on her record. With a nine-point advantage over Atlético de Madrid, the current league champion, a large part of the success of the team relies on the gloves of Paños. In her fifth season at the Catalan club, the Alicante player strengthens her leadership in one of the least grateful dividing lines of the squad but in which she dazzles with her own light.

The Barcelona goalkeeper was put on centre stage in the 4–1 loss to Lyon in the Champions League Final. For first-time viewers, Paños’ level of play may have felt lacking for a Champions League Final side, but rewind to her performances against Bayern in the semifinals, and skeptics will see what she brings to the table. She recorded two shutouts in those two very close-fought matches, which included a candidate for Save of the Year. In the home leg against Bayern, she swatted away a close-range, bullet header, and then used her feet to kick the ball out of the goal while still on the ground, keeping Bayern off the scoreboard. These heroics are nothing rare, as Paños is inclined to hug her line with incredible balance and patience, daring shooters to beat her wide. While she didn’t find much success against Lyon, the 27-year-old enters the most exciting part of her career with a promising Champions League tie and an unbeaten season ahead so far.

On the shores of the Mediterranean, a legend began to grow. Cradled in the arms of a family of athletes, her talent would hardly take long to flourish. With a father like Luís Ernesto Paños, illustrious player of Hércules CF, a mother like Gema García-Villamil, a high-level athlete crowned as champion of Spain in the 400 meters, and a professional footballer brother, Javi, it was almost inevitable that the winning gene would end up being passed on to a girl like Sandra.

She was introduced to football because both her father and brother were players. She started playing when she was very little, and by the time she was in school she was already playing competitively. After that, she was enrolled in the youth team, and then she played futsal and 7-a-side football. They didn’t let her continue playing with the boys in her school, which made her move into women’s football. Plaza Ángel is the club where she started to play thanks to one of her teachers. Flaunting innate robustness, Sandra Paños exchanged her interest in martial arts for the interlinings of the king sport, football. Brought up and developed by Sporting Plaza Ángel, Sandra displayed elite qualities in guarding the box from a young age.

At the age of 17, she was given the change to show her brilliance in the First Division, signing for Levante in 2010, guarding the goal for them for five seasons. She debuted in the Primera at 18 years old as a Levante player. It was, without a doubt, the birth of a star.

Always one step ahead, the doors of Barcelona did not take long to knock on her door. Accustomed to playing with older girls, Sandra’s solidity as a keeper led her to fortify the goal for the U–17 , U–19, and Senior national teams, entering the prestigious squad list of the Canada World Cup in 2015. Many good teams of Spanish football fought for the signing of Sandra Paños, but luck was in favor of FC Barcelona. Determined to embark on a new journey, in 2015 she accepted the Catalan club’s proposal after five years defending Levante UD Femenino.

❛ I’m at the club which plays the best football, and the one who is most behind women’s football. It has everything. We are league champions – it is a club that demands the best of you. We have a team which wants to grow, become better, and do better every year and isn’t content with the achievements of the previous season. Barcelona has values which are the same as mine, values which we both hold 100% ❜

In sharing the goal with Barcelona legend Laura Ràfols, Paños managed to grow hand-in-hand in defending the sticks for the culés. Self-assured with essential confidence, Sandra hardly took long to adapt to the newfound demands of Barça Femení. The goalkeeper provided security and leadership, qualities immediately transmitted to the rest of the players on the pitch. Furthermore, Barcelona played an offensive and possession-based game, requiring her to play fluidly with her feet, allowing her to develop into now one of the best sweeper-keepers in women’s football.

As a now undisputed starter in the recently-finished league, Sandra has obtained her third consecutive Zamora Trophy and the fourth in her individual record. She is a key player in Lluís Cortés’s plans, as the Barça goalkeeper has only picked up the ball inside her net six times out of the 21 matches played in the Primera Iberdrola. She missed only two games in the league this season: against Valencia CF, in matchday 11 due to gastroenteritis, and against Rayo Vallecano in matchday 17 for some discomfort in the Achilles tendon. Despite these minor setbacks, Sandra has managed to revalidate an award that has her name inscribed already.

Despite being the goalkeeper, she can often be found outside of goal, rushing off the goal-line or even out of the box completely in an attempt to aid her defenders in the most efficient way possible. She is capable of playing the ball calmly out from the back, helping to launch those all-important counter-attacks with all the more vigor and finesse. She is a player that seeks to control the space behind her respective back-line. The role involves keeping resolutely close to the defenders far more often than usual, keeping on one’s toes for the majority of each match, and providing counter-attacking throws with speed and efficiency.

Mapi León and Sandra Paños, for a truly unbreakable defence

Simply stated, her role is to act as an eleventh outfield player: someone who isn’t scared of running head-first into battle whenever the situation calls for it, yet a player who is equally well-versed in maintaining only the highest levels of concentration for each subsequent ninety minutes of football. So obviously, she is technical, self-aware, and most importantly wholeheartedly confident when saving her team from the brink of defeat.

Now, coming back to her role, let’s focus on some more details from this season. As much as she is responsible for carrying out this difficult job, her teammates, the defenders – particularly Mapi León and Andrea Pereira – have to ensure that they make things easier and comfortable for her to carry out, and so far this season, they are doing it with perfection. When passing the ball back to the Paños, the defenders disperse so that it allows the number 1 to play a variety of passes while restarting the attack:

When out of position, her role becomes all the more crucial. She has to ensure several things at the same time: protecting the area against high crosses, low shots, or threaded pass into the box, defending the space behind defenders to nullify any through balls played beyond the backline, and also defend the goal from sudden shots. In addition, effective communication with her defenders is of astute importance. These are some of the qualities that Sandro Paños is working on lately, adding to her exceptional reflexes.

Sandra long ago established herself as one of the best goalkeepers in the world. If you look at her individual records she has a total of three Zamora trophies in the Iberdrola League until now, ratifying without question her supremacy that she is the best in Spain. The first trophy she was awarded was in the 2015/16 season, with the last two obtained consecutively in the 17/18 and 18/19 campaigns. A key piece in the Barça Femení plans, she was named as one of the captains of the side. According to the International Federation of Football History and Statistics (IFFHS), Sandra was chosen in 2019 as the sixth-best player in the world in her position, moving up a position from last year. Given her performances for both club and country, there is a case that she will be among the top three for the year 2020. Add to that, she had already made 50 saves so far this season.

In spite of her heroics throughout the tournament, Sandra could not avoid Barcelona’s defeat in the 2019 Champions League final to Olympique Lyonnais | Photo by Imago

She was also the champion of the Copa del Reina as a Barcelona player twice, in the 16/17 and 17/18, and a pillar in the main objectives to conquer in the league and the European competition. Guarding with integrity the blaugrana goal, Sandra became the main protagonist of the UEFA Women’s Champions League the previous year thanks to her starring role. Launched towards the end of the European tournament she showed signs of achieving a historic milestone, as Paños kept clean sheets in the double knockout stages in the round of 16 against Glasgow City, in the quarter-finals against LSK Kvinner and in the semi-finals against Bayern Munich, fighting for everything in the duel against the Germans with an immeasurable save to take Barça Femení to the final.

Paños used to watch Iker Casillas playing for the national team when she was a kid, and for Real Madrid when they played Barcelona. One of the things she noticed about him was that, even though he didn’t have a great reach as his arm span isn’t big, he still made great saves. Sandra, just like him, doesn’t have wider arms.

Now she is reading keepers from all over Spain and the rest of the world. She makes a mental note of all the little things they all do and tries to learn from all of them. She admires Ter Stegen the most among the active goalkeepers, and Marc-André offered his tips and encouragement for Barça Femení with his tweet in support to fill the mini-estadi last year. Here is the video compilation of some of their best saves combined.

Glory lies in her gloves. Able to work miracles, Sandra wants to continue writing the history of Barça. Standing as a bird of prey in the goal, the woman from Alicante keeps Barcelona safely in her hands. Her maturity and mental strength are the perfect combinations, setting her apart from the other goalkeepers. Aware that her mistake can condemn the rest of the team, Sandra handles the pressure with consistency. She is almost certain to end the season with a bang and finish on a high, along with the Zamora trophy.

• Mariona Caldentey: The magician and creative force of Barça Femení

• Jennifer Hermoso: The return of the complete forward