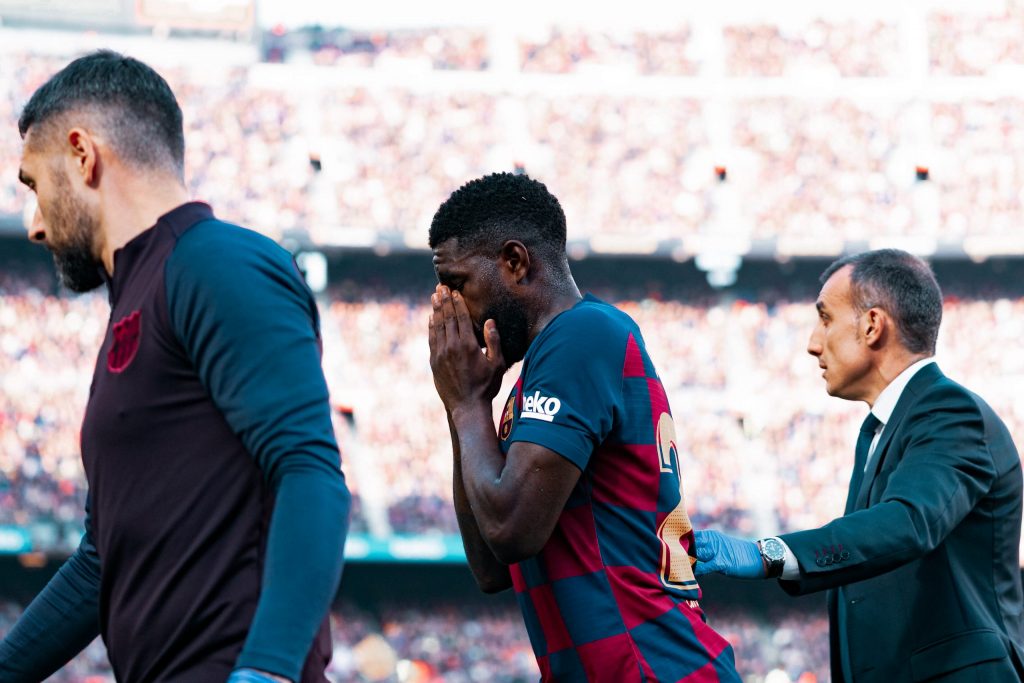 Since the 2018 World Cup, Samuel Umtiti has gone from being considered one of the best defenders in the world, to being put in the transfer market by Barcelona. Will he ever be back to his best level?

In the summer of 2016, Barça acquired the services of a young and talented Samuel Umtiti. Having displayed some momentous potential at Lyon, Barça were quick to discern his strengths as a center back. For a fairly cheap sum of €25M, the Frenchman had completed the biggest move of his career.

Umtiti, upon arrival, was supposed to play second fiddle to the ageing Mascherano. However, he took no time in steadily replacing the veteran in the squad as his performances seemed far more consistent and admirable. Eventually, his impact on results became increasingly noticeable and his rise to the first team was surprisingly swift. Despite not being perceived as a big signing, Samuel almost instantly won the fans’ approval.

His first season under Luis Enrique didn’t end with an adequate amount of silverware as Barça crashed out of the UCL and were unable to win the League. However, it was under Valverde’s tutelage that Big Sam enjoyed a relatively illustrious season. Although Barça, in recent years, never seemed reputable at the back, Umtiti, alongside Gerard simply revolutionised the back-line. The blaugranas had much to owe for his capabilities at the back.

The World Cup winner had arguably his best season and was an indisputable starter. Never did Barcelona seem so composed and stable at the back, but Umtiti brought a whole new dynamic to the Catalan defence. Umtiti’s distribution on the ball, his awareness and intelligence allowed him to always be one step ahead of opponents. He wouldn’t just rush into reckless tackles, but positioned himself with perfection. He certainly wasn’t the most physical or athletic defender, however, what made him stand out was the fact that he fulfilled the basic principles of defending with an awe-inspiring level of efficiency.

Umtiti ended the 17/18 season on a very high note, he won the La Liga and Copa Del Rey, journalists in Spain were recognizing him as the perfect heir to Puyol and many regarded him as one of the best center backs that season. Samu was practically at the top of the world, but that glory was woefully shortlived.

Unfortunately, it all went downhill in the next campaign. After Umtiti, admittedly, pushed the barriers to help his national team secure a World Cup, his knee injury took a huge toll on him. In spite of being a first choice defender, the new signing, Clément Lenglet quickly took his place in the squad. Umtiti had to spend most of his times recovering, while Lenglet was making a name for himself in the starting XI. Even when he would be declared fit enough to feature in the lineup, his French compatriot would overshadow him and force him to linger on the sidelines.

Once deemed to be the future of Barcelona’s defence, Samuel Umtiti currently is in the azulgranas’ transfer list | Photo by David Ramos via Getty Images

After barely spending any time on the field that season, fans were worried and losing faith. Stepping up in the 19/20 campaign was of utmost importance for Umtiti, and with the season already past the halfway mark, has Umtiti lived up to his expectations? Not quite.

Setien’s faith in Umtiti at the start of his tenure was encouraging to see. However, it’s hard to really ignore the fact that the Frenchman has, for most periods, been nowhere near his best. It’s understandable that Quique prefers him over Lenglet since he always remains comfortable on the ball and doesn’t resort to unconventional methods such as sending in long balls blindly. When it comes to playing out from the back, the 26 year old can actually play a crucial role. Though, Umtiti is just a shadow of his former self; he’s extremely slow when it comes to tracking back and makes errors on such a consistent basis. He is also easy to beat in the physicality aspect now. Lenglet hasn’t been at his best this season, but his importance can be seen when it comes to winning the ball back and challenging the opposition attackers. Umtiti almost completely gives up when forwards find spaces to exploit. His injury has severely affected him and no matter how much superior he may be than Lenglet in his prime, his current form is what has to be considered.

Technically, Umtiti is a better defender as he can anticipate passes well. But his legs aren’t doing his intelligence and awareness justice anymore. We’re seeing a rusty version of the former Lyon wonderkid, one that lacks fine-tuning and finesse. Barcelona fans’ love for Samuel knows no bounds, but it’s evident that his prime was sadly momentary. While getting to see him back at his best would be any culé‘s dream, he has persistently been a victim of recurring injuries. Seeing Samuel Umtiti depart the club in the upcoming transfer window is certainly on the cards.

Braithwaite at Barça: What does the future hold?
What did you think of this article?