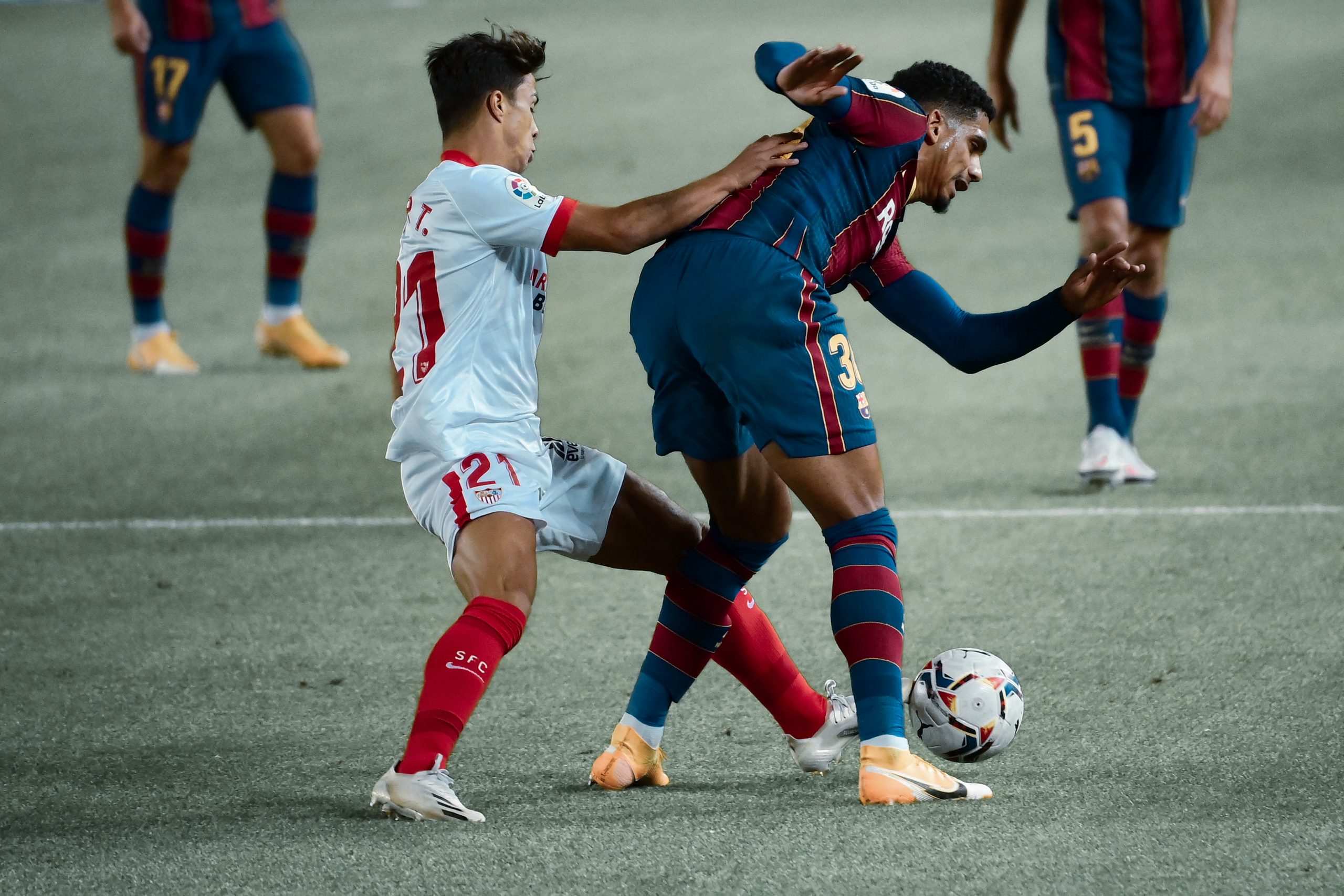 With the lack of signings in defence, Ronald Araújo, promoted this summer from the B team, could enjoy consistent minutes at Barcelona to showcase his potential this season.

The transfer window departed as quickly as it arrived for Barcelona’s defence. At the end of an embarrassing season, it was difficult to fathom how the Catalans could step into the next term with the same central core. However, the window has come and gone. The only change the centre-back position has seen is a certain Uruguayan prodigy’s number change from 30 to 4.

Having once been the fifth-choice centre-back, Ronald Araújo has made a steep climb up the pecking order. Within a year after his debut, he seems to be ready to fight with the starting centre-backs for a place in the line-up.

Now with Samuel Umtiti not as reliable as before, and Jean-Clair Todibo sent out on loan, the former Barcelona B player’s importance has increased multi-fold. The general nature of the centre-back position deals with a large number of booking and suspensions, which makes the back-up options even more vital to the team’s success. And with Gerard Piqué now 33, his legs too will require more rest than they have demanded. All factors considered, Araújo will see a drastic increase in playing time this season. Undoubtedly, this will be the season that scripts his future at the club.

The young Uruguayan has proved to be reliable in the few minutes he has seen across the past year. His horrific debut will be one that culés remember vividly. After coming on to replace Todibo in the 73rd minute against Sevilla, he lasted on the pitch only 14 minutes. A foul on Chicharito Hernandez awarded him a red card, and he received his marching orders. Yet, his debut must not be used as a scale to judge his ability and composure.

Last season, the 21-year-old had six appearances for the first team in the league. Despite coming under criticism for his horizontal band of passing, he was defensively firm. It was against Mallorca that he announced himself to the world. With 4 clearances, one blocked shot and 60% aerial duels won, it was a display of his defensive ability. Over the course of the season, multiple facets to his game were unlocked.

Araújo’s first team debut did not go as planned, but it did not affect him nor his chances | Photo by Josep Lago / AFP via Getty Images

Standing at 6’3, he has a physically dominant presence on the field. His height also makes him an imposing threat in the air, not just in defensive duels but also during set pieces. Astoundingly, his height does not appear to impair his pace in any manner. At 34.91 kmph, Araújo was also La Liga’s fastest player in 2019/20, with a searing run in the final league game against Deportivo Alavés. His pace and agility gift him with the impeccable ability to win the ball with minimal clumsiness. He has proved his strengths to be his anticipation, intelligence and speed. Furthermore, a dominant presence in the air and an imposing physique add to an impressive resume.

Nonetheless, there is yet another part of his skill set that makes him perfect for the Catalan club. In addition to his defensive capabilities, his ball distribution and composure on the ball are immense. In his six appearances for the first team in 2019/20, the youngster completed 94% of his passes accurately, with up to 60% long passes being accurate too. With a good ability to dribble, he has shown to be competent enough to find a way out in tricky situations. Though it is true that a large part of his passes has been horizontal, using that against him would be harsh indeed.

His most recent outing, once again against Sevilla last Sunday exemplifies his potential well. With Clément Lenglet suspended, Araújo was handed the start in what was the blaugranas‘ most important game so far. Against a ruthlessly attacking and confident Sevilla, the Uruguayan pocketed Luuk de Jong for long parts of the game. With 4 out of 4 ground duels won, 4 accurate long balls and a key pass, he was one of the reasons Barcelona did not spill the point. If anything, it was a performance that showed that he is ready to compete with the likes of Piqué and Lenglet.

Undoubtedly, he is not yet the complete player we need. There are notable areas where he has to improve, like his verticality in passing, positioning and ability to hold the line. That said, one must remember that he is just 21. His dedication, work ethic and confident displays have earned him regular call-ups to the Uruguay national team too.

What a young upcoming player needs the most is support. With both the board and the coach clearly backing him to step up, Araújo has a set platform to make the big leap. He has officially earned his promotion to the senior side and will don the number 4 shirt this year. Undoubtedly, he has all the characteristics to make it big in Barcelona. It is now only a question of his hard work and drive to be the best. This could be the year he cements himself, and one hopes he uses it wisely.