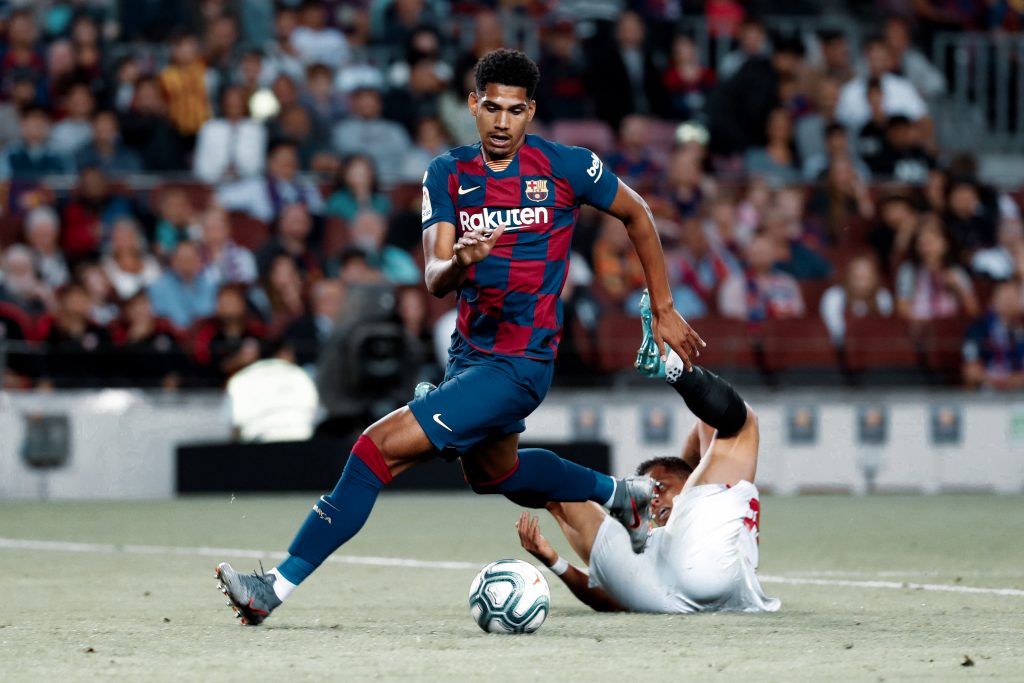 Translating his impressive form from Barcelona B, Uruguayan centre-back Ronald Araújo earned his first senior start on Saturday against Mallorca. Deserving of more?

To be able to make the leap from a second team to the top flight, one of two things is required: personality, or maturity. Obviously, and ideally, both traits should come together. However, if one has certain limitations in one aspect, he can compensate them by standing out in the other. For instance, many argue that La Masía 20-year-old midfielder Riqui Puig does not have a physique matured and developed enough for the First Division. That said, his uniqueness, self-confidence and personality regardless of the opponent is what makes him such an exciting prospect.

There are others who are not as special in terms of talent as him, of course. This could be the case, for example, of Barça B’s Monchu Rodríguez or Ronald Araújo. They may not be the best in terms of raw qualities, but their unmatched competitiveness and maturity for someone of their age is what has made them receive call-ups for the first team in recent times.

While all-round midfielder Monchu is waiting for his debut as he made his first senior squad list on Saturday to face Mallorca, Uruguayan centre-back Ronald Araújo enjoyed his second appearance with the big boys this past weekend. He had already been handed his debut by Ernesto Valverde back in October at the Camp Nou against Sevilla, as he came off the bench in the 73rd minute to replace an injured Jean-Clair Todibo. Nonetheless, that day had a bittersweet taste for Araújo as he was sent off only 14 minutes later for a challenge on Chicharito Hernández.

Even so, back then it already looked like that was not going to be his only minutes with the blaugranas. His progression in the past two years has been stellar, since he was signed for Barça B from his native Uruguay in 2018. A defender with excellent physical and defensive conditions, hardly any Second Division B striker has been able to beat him in a duel. Strong and tall, with 1.93 metres that allow him to be an imposing figure in both areas, Araújo impresses with his ferocious competitiveness in spite of his 21 years of age.

Still, his main weakness since arriving to Barcelona has been his footwork and adapting to the Catalans’ positional play. While no one doubts his defensive expertise, it’s his ability to build up play what needs most improvement. Notwithstanding, Barça B coach García Pimienta has been guiding and teaching him from day one, and Ronald now looks much more settled into Barça’s game. Despite he will never have others’ talent to break lines, his positional sense and intelligence with the ball at his feet have experienced an impressive evolution since 2018.

❛ I worked hard to make this opportunity happen. I am very happy and excited. I tried to enjoy it to the fullest ❜

Ronald Araújo
after his first start against Mallorca

With his physical readiness and combativeness, it is clear that making the leap to the elite will not be a problem for him. Therefore, with Clément Lenglet suspended and Samuel Umtiti just returning from an injury, manager Quique Setién did not hesitate to give Ronald Araújo the full 90 minutes away against RCD Mallorca on Saturday. It was Barça’s first La Liga game after a three-month break, but Araújo didn’t seem out of place at any moment. In fact, he looked as if he had been playing alongside Gerard Piqué for ages.

It is true that Mallorca were not a too challenging opposition this time, and the circumstances were not the appropriate ones to judge someone. But, while the Bermellones‘ Takefusa Kubo was very threatening with his trickery, the Uruguayan managed to remain composed, solid and concentrated. He was very attentive to make a block or interception, recorded the most completed passes with 99 out of 104 attempts (95% accuracy), and had the joint-most clearances alongside Piqué, both with four.

❛ I always work to play. I trained a lot during confinement and also learned tactical aspects that I lacked ❜

The high position of sweeper keeper Marc-André ter Stegen throughout the entire match took off some responsibilities from Araújo in taking the ball out from the back. Still, the youngster did exactly what a coach would demand from his inexperienced centre-back: to not take risks. He did play it safe most of the times, but not earning much attention already shows that he was calm and polite and did nothing wrong. When a defender makes the headlines, that usually is because of a blatant error, but that was not the case for Ronald. Instead, he looked almost as experienced as others.

With Lenglet returning from suspension and Umtiti in need of minutes as he needs to prove his value before a potential transfer in the summer, Ronald Araújo may have a subsidiary role as the fourth centre-back this season. Nevertheless, with five substitutions allowed per match, with him being the only right-footed centre-back other than Gerard Piqué, and with rotation needed with the dense schedule ahead, Araújo could be enjoying many more minutes with the first team than before.

❛ My teammates and the coach gave me a lot of confidence. Years ago I chose them [Barça] on the PlayStation, now I share dressing rooms and matches [with them]

He [Luis Suárez] has helped me a lot, not only in football matters, and before the game he gave me a hug ❜

After his solid performance against Mallorca, the coaching staff may have been reassured of the 21-year-old’s capacities and may place their faith in him more often. If Piqué needs rest, he could be his first back-up rather than having to use a left-footed defender on the right. Moreover, with Jean-Clair Todibo on loan at Schalke 04 but rumoured with a highly questioned move away from Barcelona in the summer, Araújo could be pushing for a permanent promotion ahead of next season. As he continues to collect professional minutes, Ronald Araújo looks to rise in the pecking order at the same time that he earns Setién’s full confidence.