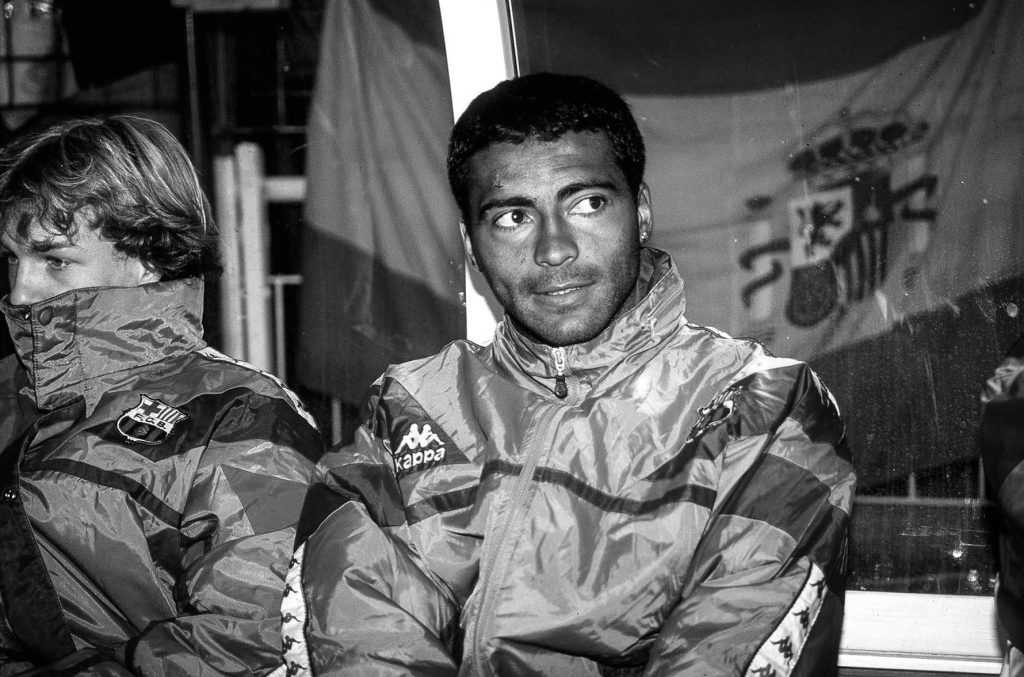 Romário didn’t play for many years at Barcelona, but 16 months were enough to consider him a legend. One of the best talents in history, he was lethal, agile, gifted…and a samba lover. Although he didn’t have the best discipline, his impact was so great at the Camp Nou that Johan Cruyff had to reject his principles on several occasions. This is the story of Romário at Barça.

Before his arrival to Barcelona, Romário da Souza had conquered the hearts of lovers of good football. Of those who prefer a nice dribble before a run on the wing. Those who enjoyed a technical game before a physical one. In short, lovers of the Jogo Bonito. Romário had everything to succeed in any team. Technical quality, goals and a perfect game, something that wasn’t seen since his compatriot Pelé.

However, as a good Brazilian, he was a person who adored his country very much. He was faithful to his culture and had other interests, in an attitude which, at the time he came to Barcelona and Johan Cruyff was the coach, was not allowed. Or at least, not often. Even so, the signing of the great Romário, who was 27 at the time, was made official in the summer of the 1993/94 season. He came from PSV Eindhoven, where he had a brilliant spell, but at Barça, he reached the status of a legend.

The piece Barça was missing

After Johan Cruyff’s Dream Team managed to win the first European Cup in the club’s history in the 1991/92 season, Barça suffered a painful elimination against CSKA Moscow in the quarter-finals of the continental tournament in the 1992/93. The team was still one of the best in the world, but an alternative in attack was missing. The Catalans lacked a pure 9.

At that time it was decided to position Hristo Stoichkov in the middle of the attacking trio, but better results were obtained when he was located as a winger. There was also the successful option of playing Laudrup as false 9, though that tactic increasingly lost effectiveness and consistency.

Fortunately for the Catalans, in the following transfer market a player ticked all the boxes with all the characteristics and technical skills that were needed at the club. That was Romário da Souza. Contemporary with the problems of Barcelona, the Brazilian also had difficulties. He was tired of the cold Netherlands and no longer had passion in football. He no longer saw anything magical in this sport. In the same way, Romário was also lucky for the needs of Barça, since Barcelona was a friendlier city for him and that could remind him of his nation. Furthermore, O Baixinho liked Cruyff’s style and was confident that he would adapt quickly. He was not mistaken.

The arrival of Romário in Barça was the missing piece in Cruyff’s machine. As a ring to the finger. In his first official match, the team faced Real Sociedad. Romário took the pitch with confidence, and as if it was plain sailing he scored a hat-trick. When the game ended, fans already had a new idol.

The obstacles that crossed Romário’s path

As the games went by, Romário kept doing his job at Barça. He scored a brace in one game, the following week he scored three goals, then he scored two again. Nevertheless, there were also fixtures in which he was non-existent or extremely fatigued, perhaps because he loved attending parties. Even so, that was the Brazilian’s thing: goals and samba.

One of the obstacles Romário went through was a streak of more than eight games in a row without finding the net. That was when fans and the press began to doubt him. The footballer answered to the criticism with a famous phrase saying that the fans better judge him at the end of the season. Johan Cruyff on many occasions defended the South American for the strong confidence he had in him. He was the only player that the Dutch coach respected and allowed his indiscipline actions to pass, of course, as long as Romário scored goals.

❛ Don’t ask me to run like Sergi Barjuán, shoot like Koeman or fight like Stoichkov. I’m just asking you to be judged at the end of the season ❜

Romário was Professor Cruyff’s favourite student. The Dutchman once had an episode with the striker in a match against Osasuna. Before it, Romário asked Johan if he could miss two days of training in order to go to Brazil to the Rio de Janeiro carnival. The manager replied: “If you score two goals tomorrow, I will give you two more days of celebration compared to the other players on the squad”. The next day, Romário scored two goals and immediately asked to be subbed out. He said to Cruyff: “Coach, my plane leaves in an hour”. Johan had no choice but to keep his promise.

Top goalscorer in La Liga in his first campaign

Romário finished his first season at Barcelona scoring a brilliant number of 30 goals in 33 league games. An impressive average of almost one goal per game. He was awarded with the Pichichi trophy for the top scorer in La Liga. In addition, Barça were able to win their fourth consecutive league with Cruyff, but, without the contributions of the Brazilian, this achievement would have hardly been accomplished.

Tactical analysis of Romário at Barcelona

More than a party character and a pure goalscorer, Romário was a unique talent at Barça. O Baixinho was an opportunist who always took advantage of every occasion he had. How? With his acceleration and change of rhythm between the lines, and his dribbling to leave defenders behind in short spaces. With exquisite ball control and the ability to link up with teammates, he was the king of feints, making unpredictable movements for any rival, and was very creative when setting up his own shot. He was like a box of surprises: you never knew what he was going to surprise you with, but you knew that was going to be magnificent.

One of his most memorable matches was in a 5–0 victory in the 1994 Clásico. Romário scored a hat-trick and created a work of art in that duel. In the 24th minute he opened the scoring by dragging the ball on its own axis on the side of the defender, Rafael Alkorta. He made such a fine and perfect move that he was left in a position to finish in a one-on-one with the goalkeeper. In the second half, the Brazilian star scored his second of the night with an easy tap-in. With nine minutes to go, Romário ended his magical performance by completing a hat-trick with an unstoppable shot for the keeper inside the area. Legendary performances for legendary players.

The end as a Barça player

Every beautiful story has an end. Unfortunately, this ending was very premature and somewhat controversial. After being crowned world champion with the Brazilian team in the summer of 1994 and being considered the best player in that tournament, problems began.

Romário spent his first ten months at the Camp Nou combining success with the doubts raised by his introvert temperament. No one said anything in his favour, nor did they recognise merits in his playing attitude despite having his father kidnapped. But yes, on the other hand, he was criticised when he went to Brazil on vacation and didn’t return in time to restart training.

Neither did he allow himself to be loved much. The only gestures of affection that he sent to culés were made on the field when he scored goals. Notwithstanding, off the pitch, Romário didn’t maintain the same love for the club. Only at the 1994 World Cup in the United States. He publicly thanked Barcelona and Cruyff for the opportunity they had given him to regain enthusiasm for football.

Pep Guardiola and Romário, during a later friendly between Barcelona and Brazil in 1999 at the Camp Nou | Photo by Imago

Romário gave the impression that he loved Barcelona and the city very much, but he was not identified with anything. Because he wasn’t, and he didn’t even own a home. He said he wanted to end his contract with Barcelona and then go to Brazil, but in 16 months in the Catalan capital Romário never found a house to live in. There was no real estate agency that put the house he was asking for in his hands. Romário always lived in a hotel. First the Princesa Sofía hotel, where he had two of the best rooms. But, according to the porters of the hotel, he didn’t even say goodbye when he decided to move to the Hilton hotel.

Contributing decisively to winning the World Cup title put Romário in heaven. He thought he had the license to do and undo. And he really unmade more than he did. Already during several training sessions, Romário did inexplicable things. Having the residence next to the Barcelona facilities, he arrived more than a couple of times late. But everything was forgotten when he went out onto the field and scored goals. What he would never forget and would mark the beginning of his goodbye to Barcelona was his return from Brazil after the summer holidays. He was a godlike figure, like almost all the stars of the team that conquered the World Cup.

❛ I’m happy because I won’t have to train again, or travel or sit in team hotels ❜

Romário da Souza
after being sold to Fluminense

The world champions received so much affection from their fans that the desire to return was non-existent. Romário wasn’t in the presentation of the team, nor did he travel for preseason. He appeared after more than twenty days. And while his teammates were preparing to aim at their fifth consecutive league, from Brazil came photos of Romário dancing samba, playing friendlies and partying – as tired as he was from having participated in the World Cup.

The end of Romário da Souza as a blaugrana

So much indiscipline ended up breaking the appreciation that his teammates felt for him. Even Hristo Stoichkov, his best friend, criticised his attitude. Romário was acting on his own side, and cared little for friendship. He was a time bomb, and at any moment it could explode. The dressing room couldn’t help him anymore. His partners felt mistreated by his character. But he came back and spoke to the captain, José Mari Bakero. He made excuses for having extended his vacation and then spoke to the squad in general. Cruyff saw a gesture of humility there and maintained his theory: if he scores goals, I care little about what he has done in Brazil. But the only thing that kept him alive disappeared: the goals.

It was then that Cruyff saw clearly that he had already made too many exceptions with Romário and gave him the greenlight to negotiate his transfer. With his decision, Johan was being faithful to his theory that in Barcelona no one is essential. Not even the first world champion Barcelona had in its history. Not even the player who once said that football is seen through Cruyff’s eyes.

❛ Football looks at itself with Cruyff’s eyes ❜

In the end, Romário was sold to Fluminense, in his native Brazil, in January 1995 for a good amount of money. And that’s how Romário’s 16-month career at Barcelona ended. Success in the first 10 months, controversy in the remaining ones. The only player who was able to dominate Cruyff. He made the Dutchman greatly reject his philosophy for his gift to score goals in almost every game. Even so, O Baixinho will always be remembered as a Barça legend. For his goals, attributes, samba and for that fourth league title. Culés shouldn’t have been sad because it was over, but happy because they had lived with Romário.