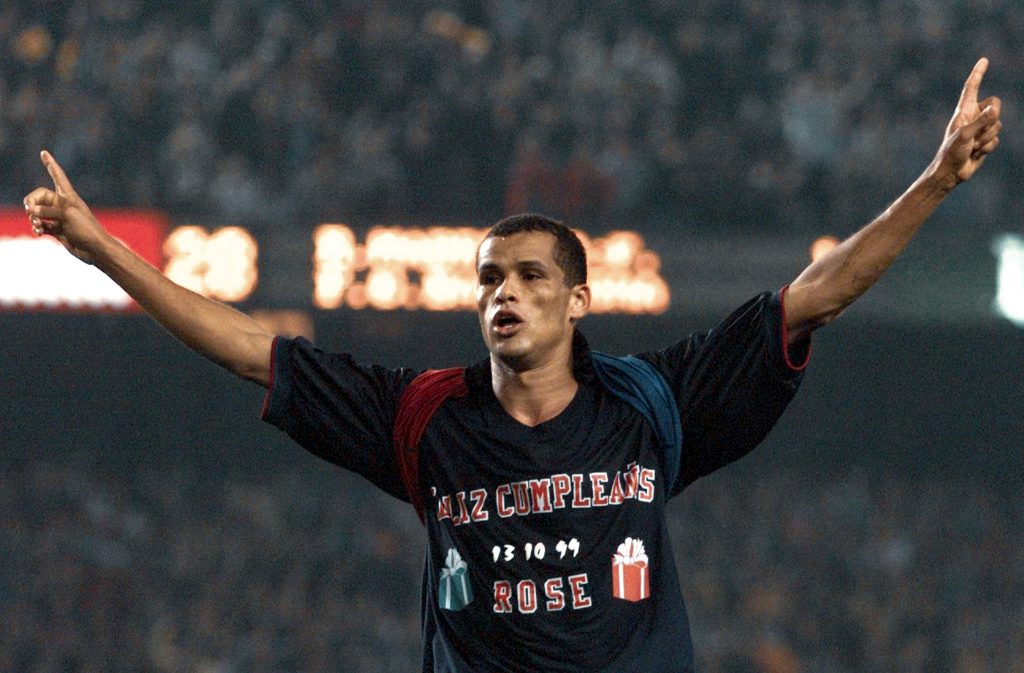 In his 48th birthday, we relive the career and time at Barcelona of Rivaldo, the genius that was eclipsed by the club’s dark period.

After his early years in his native Brazil, Rivaldo Vítor Borba Ferreira arrived to La Liga in 1996. Like PSV for Romário or Ronaldo Nazário, Deportivo de la Coruña was the intermediate step for the young South American before making the leap to Barcelona. After just one season in the Galician city, on 15 August 1997 – the final day to register players in the Champions League –, Barça paid the release clause of Rivaldo, which stood at around €24 million. It had been the blaugranas‘ manager Bobby Robson who had convinced the board to sign him over Steve McManaman.

The transfer was a hard blow for Dépor, who had already lost their other star Bebeto a year earlier, and it was a moral boost for Barcelona, who managed to put it back together after the traumatic sale of Ronaldo to Inter. So, as the culés had not won a league title since 1994 with Cruyff’s Dream Team, two new individuals arrived in town to instil hope to the fans: Rivaldo as Ronaldo’s replacement, and Louis van Gaal to succeed coach Robson.

With them, the Catalans rose again. In his debut campaign, and partnered by the likes of Pep Guardiola, Figo and Luis Enrique, Rivaldo scored 28 goals to help the team conquer La Liga and Copa del Rey. Despite the domestic double, though, Barça were knocked out of the UEFA Cup in the quarter-finals. The following season, the 1998/99, was supposed to be a special one, as it was the centenary year for the institution. With important signings, like the De Boer brothers, Phillip Cocu or Patrick Kluivert, all Dutch under their countryman Van Gaal, Barcelona achieved an impressive turnaround in La Liga. But, again, the second league trophy in a row was coupled with an early European elimination, in the group stage of the Champions League. Meanwhile, Rivaldo was scoring left, right and centre, with 29 goals in all competitions.

With the collective improvements and the stellar form from the number 10, it looked like a happy story. However, in the third season came the problems. In 1999, Rivaldo won the Ballon d’Or, yet he began running out of goals. There were whistles at the Camp Nou. “It’s very sad to be whistled on the same day that they give you this award. I want to show that I can be an extraordinary player in the centre of the pitch”. But, while his relationship with Van Gaal had always been far from ideal, it now started to deteriorate even more. The Brazilian refused to play on the left wing, as he wanted to be in the centre, in midfield. Nonetheless, Louis was rigid and adamant, and his orthodox positional play didn’t grant its star such freedom. After all, the coach and footballer were both very stubborn men.

Rivo‘s lack of collective sense and sacrifice didn’t fit into such tactically disciplined scheme. Besides, as the team continued to fail in Europe, its successes in Spain stopped too. In 2000, the azulgranas lost La Liga to Deportivo, and Van Gaal left right after it. He was replaced by Serra Ferrer, but, with different managers, Barcelona had five consecutive trophyless campaigns from 1999 to 2005. Even so, with Serra Ferrer and Carles Rexach, Rivaldo managed to solve the group’s dysfunctions with goals and magic. In the last game of the 2000/01 term he produced one of the greatest hat-tricks ever in a 3–2 win over Valencia to qualify Barça for the following Champions League edition. First it was a trademark bending free-kick, then a long shot into the bottom left corner and, in the 89th minute of the match, a bicycle kick that produced an explosion of emotions at the Camp Nou. It was a stroke of genius.

Rivaldo, during a friendly between Barcelona and the Brazilian national team at the Camp Nou to commemorate the club’s centenary year, in 1999 | Photo by Phil Cole / Allsport via Getty Images

Rivaldo was a player that, if compared to others, could fall short of the top spot, but his brilliance was expressed by what he did on his own, shocking fans with his unbelievable pieces of wizardry. He didn’t have Romário’s touch, Ronaldo’s explosiveness, Ronaldinho’s smile or Neymar’s dribbling. He seemed a sad and melancholic guy, without charisma, and he didn’t change the club’s mood like Dinho did. And, in spite of this, he had everything: skill, creativity, technique, balance, control, agility, subtlety, dribbling, and a sharp goalscoring instinct. He recorded 130 goals during his time at the club, including many of his traditional artistic and efficient goals: strikes from long range, short range, free-kicks, volleys…One of the best and most delicious left feet of his generation.

❛ Van Gaal is the main cause of my departure. I don’t like Van Gaal, and I am sure that he doesn’t like me, either ❜

Notwithstanding, in 2002 the storm returned: Van Gaal was back. The first thing he did was to release Rivo on a free transfer to Milan. Their harmful relationship had reached a climax, and Louis argued that Rivaldo “was only interested in making more money and playing less. He was chosen as the best player in 1999, but he has not handled himself well since then and has not behaved like a footballer should. He had illusions about Barça and was requesting to take holidays when important Champions League games were approaching. He then hides back home in Brazil. He plays for Brazil like we needed him to at Barcelona”. It is true that Rivaldo possibly was the solution and the problem at the same time. Still, his greatness was unfairly overshadowed by one of the club’s darkest eras in recent memory and the later smile of Ronaldinho that would change the fate of the team.

• An all-time Barcelona XI with only one player per country