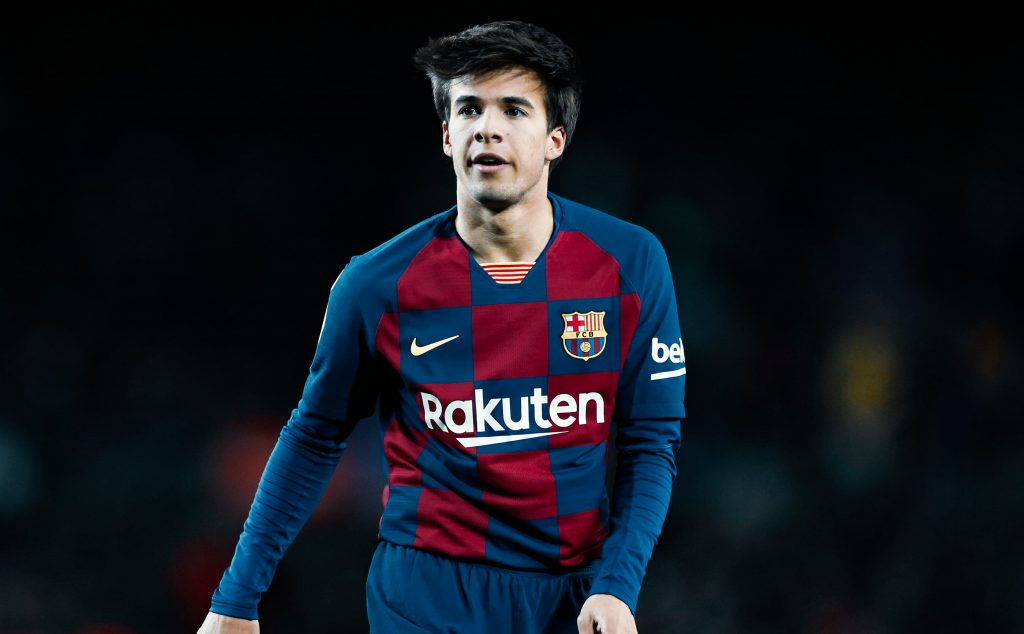 After waiting patiently for a long time, the injury of Frenkie de Jong could present Barça B midfielder Riqui Puig the opportunity to play or even start regularly in the first team.

With Frenkie de Jong‘s latest calf injury, Barça are severely deprived of options in midfield. Although Arturo Vidal, Iván Rakitić and Arthur Melo are still regular members of the first team, a trait all three interiors lack is Riqui Puig’s unequalled desire and yearning to progress forward with the ball. Despite not being a recurrent member of Barcelona’s starting XI, La Masía’s pearl outshines all seniors in that facet of his gameplay, bringing an unflagging level of enthusiasm and energy every time he steps foot on the field. Has the youngster’s time to finally start with the big boys arrived?

Short, slender and flimsy to the eyes, but not with the ball with his prolific pair of feet, Riqui is every defender’s biggest nightmare. He moves with precision, times his runs with perfection, and most importantly, assesses his surroundings with the eyes of a hawk. Despite often showing glimpses of his supreme talent with the senior team, now is the ideal opportunity for the young Catalan boy to showcase his abilities on the grand stage.

“De Jong’s absence is an important loss, but I have confidence in the rest of my players”

In Friday’s goalless draw against Sevilla, the blaugranas had all the possession in the world, but one thing they grievously lacked was initiative to advance and make something happen in the final third. While Puig is far too inexperienced to be able to single-handedly conjure creativity in midfield and cure the dependence on Lionel Messi, the 20-year-old is one of the few individuals who seeks players in areas where they can cause damage.

In spite of being efficient in tight areas and pressing players valiantly, what he is most known for his intent to innovate in the middle of the park, and undeniably, that is what the current Barça team lacks the most. Frequently, the Catalans get caught in a stalemate with pointless wayward passes, which often find no result. Rakitić and Vidal seem to play vital roles in Barcelona’s build-up plays, but the long periods of possession usually end up with substandard results.

Against Leganés last week, 20 minutes is all it took for Riqui Puig to dominate Barça’s midfield and display his virtuosic abilities on the ball. After lengthy spells of possession which often broke down in the final third, Riqui added that extra spice and flare the culés deprived of. With so much energy oozing within him and constant hunger to do something on the ball, Barça’s tempo had shifted almost completely in the closing stages.

During certain parts of the game, the azulgranas‘ build-ups gravely lacked verticality and liveliness as Quique Setién’s men became exceedingly static in the centre of the park. Nonetheless, with the introduction of Puig, a drastic change in gameplay was evident, leading Barcelona to suddenly move forward more effectively. It seemed as if the tides had changed with just a slight tweak in tactics.

Of course, one can’t hide the fact that Riqui was playing against an exhausted Leganés side, but it is in moments like these one gets to see his tremendous potential. Arthur, who was subbed off for the youngster, continuously spent time making sideway passes which were ineffective in the grand scheme of things, while Puig almost immediately exhibited his dynamism. Rather than waiting for the opposition to put a foot wrong, he’s simply a go-getter.

Ever since football has resumed, players from the B team have displayed some brilliant performances, and Puig, in particular, has looked like a sight for sore eyes. Although he is yet to develop as a player, with abundant play time, faith, belief and reliance, he is destined to go a long way. While Frenkie de Jong’s absence might put the club’s league title in jeopardy, if it means young Riqui Puig is given the opportunity to make a breakthrough in the first team, the Dutchman’s injury could prove to be a blessing in disguise.