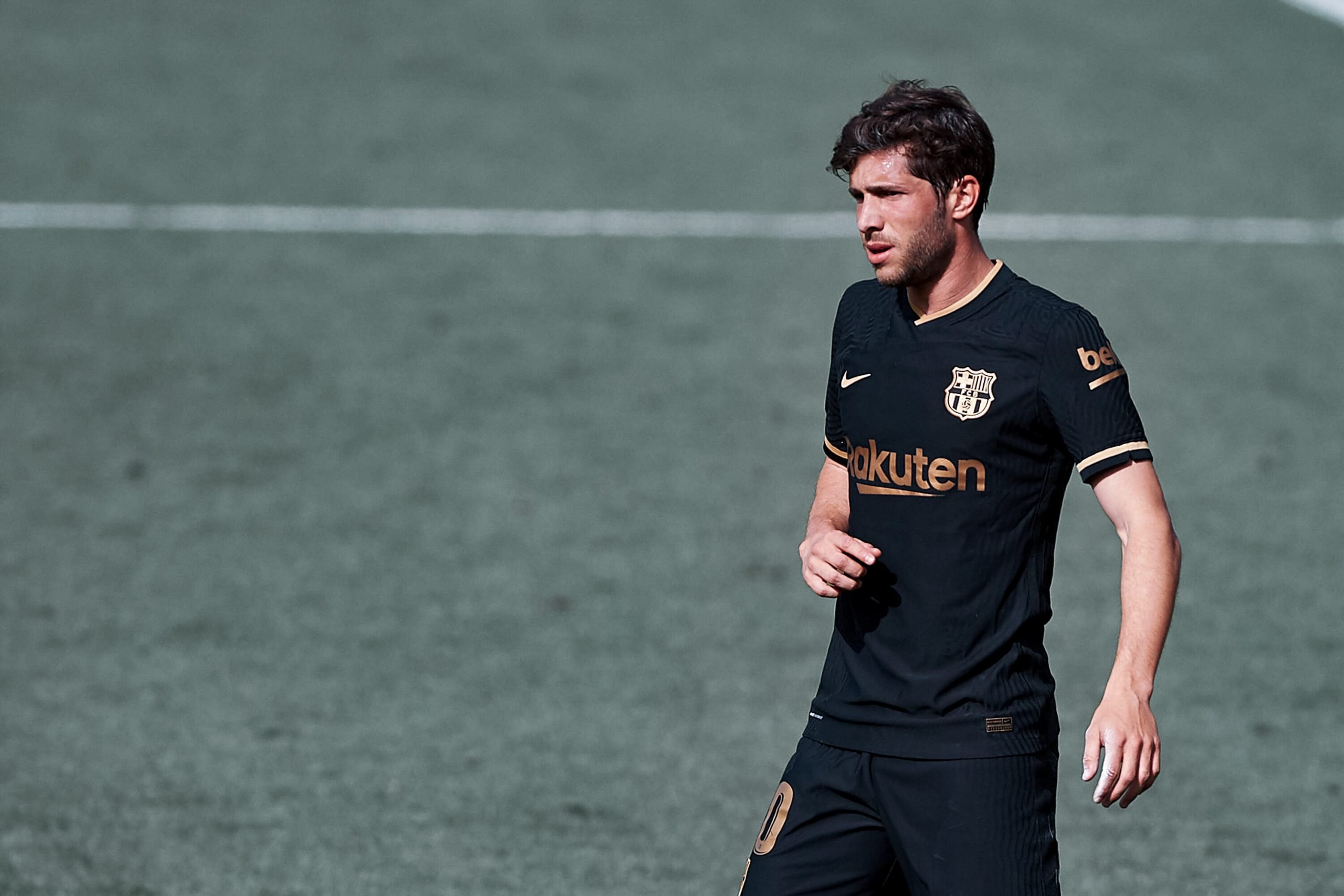 On the back of yet another harrowing performance for Barcelona, Sergi Roberto once again finds himself in the hot seat, as fans demand his head. The Catalans’ Swiss army knife had a callous time in the wingback role, struggling to create anything of substance as Barcelona fell to a damning 1-2 loss at home to Granada.

His performance against the Andalusians is merely one of a plethora of games in which his quality has been put into question. These questions become all the more pertinent as a certain Emerson Royal finalizes his second year with Real Betis, in a deal that has him headed to Barca come the start of the 2021-22 season. The Brazilian has in many ways been touted as the “next Dani Alves”, owing to his prodigious performances in the right-back role.

In a team full to the brim and overflowing in talent, Roberto is crowding places in the squad. In this article, Barça Universal explores the 29-year old’s failings, as well as why he desperately needs to be replaced.

The full adage says that a jack of all trades, and a master of none, is oftentimes better than a master of one. Sergi Roberto is the embodiment of this. Be it under Luis Enrique or either of the three managers that succeeded him, the Spaniard has been Barcelona’s go-to player whenever the team had a spot that needed filling.

Throughout his career as a Barça player, since gaining importance to the side in the 2015-16 season, he has never truly established himself in any role in particular. The knock-on effect of this is having a player who just suffices when it comes to being versatile but who falters when tasked with performing one role to the best of his ability.

“Squad players”, as they are called, are essential to the functioning of any team. As Tito Vilanova famously said in 2011, “we don’t need better players; we need complementary players that helps us be better.” Roberto performs this role in an estimable manner, as he offers something ever so slightly different to the wide array of roles that he takes up in the team.

There are, however, a few problems that arise when a player whose quality is reserved for rotational purposes earns as much, plays as much, and interferes as much as he does with youth, especially while not being an exemplar in anything he does. Sergi Roberto is indeed flexible, but he does next to nothing to add to the team’s dynamics, rather detracting from them, especially when taking into consideration the alternatives available.

For once in quite a long time, the Garnet and Blue have the luxury of saying that they have an established midfield trio. Frenkie De Jong, Pedro ‘Pedri’ Gonzalez, and veteran Sergio Busquets have cemented their spots in the starting eleven. Not far behind are the likes of fan favourite Riqui Puig and 18-year old Ilaix Moriba in the interior roles.

One of the biggest issues comes when this interferes with the progression of youth, and especially in a transitional year. Him merely being in the squad acts as yet another barrier that the likes of Riqui have to overcome, and for the sake of the youth, the environment for their progression should be more accommodating. In this fast-paced world, the slightest of mistakes from the youngsters will be perceived as egregious by their managers but certainly won’t bring out the same punishment were it to be committed by one of the older players.

Including him in the starting eleven over a younger player should come if he has something to offer that the youth cannot, however, he has next to nothing to add to the overall functioning of the midfield. For instance, Pedri’s proactive and attacking nature coupled with his ability to involve himself in build-ups is something Roberto does, however, not to the same degree or nearly the same efficiency despite the ten-year gap. He does not boast of Pedri’s vision either. When compared with FdJ, the Dutchman, unlike his Spanish counterpart, has both versatility and dexterity to offer in all three layers of the pitch and in stark contrast to the captain, he shows the nonpareil potential that Roberto’s ceiling simply cannot reach.

The current midfield as a whole quite frankly has far too many options to be relying on a figure such as himself, either for rotation or worse, a starter.

At right or wing-back, his performances become all the more atrocious. He lacks Sergino Dest’s explosiveness and adventurous int he final third, and while a better passer as of now, fails to make use of it to add to the team’s attacking exploits. Dest, however, is relentless, and continues to make runs till the edge of the pitch before hitting the ball hard and low to create chances.

Even Oscar Mingueza offers more than the 29-year-old, adding defensive depth and incredible anticipation off the ball to the RB position. As a matter of fact, Mingueza has shown that with the help of his physical attributes, he is able to push forward with the ball, overpowering defenders in the way.

The game against Granada — for the sake of recency — is indubitably one of Roberto’s worst in a Barça shirt. He had absolutely nothing to offer in the final third, with many of his passes either going backwards or horizontally in ways that would cause little to no threat to the opposition. Even with acres of space ahead of him, begging to be exploited, he much preferred the safer option, one that would keep his passing accuracy stats as high as they were (92%).

In defensive transitions, Roberto’s performances are almost always sub-par. He is an easy target for opposition attackers, given the fact that he leaves a ludicrous number of gaps in behind, as well as his incapacity at winning in 1v1s. He attempts very few pressures, scarcely succeeds in his tackles, makes little attempts in either interceptions or blocks, and is an utter failure at making clearances. His off the ball numbers in defensive actions are a nightmare, to say the least. In the five metrics listed above, he is, on average, below the 17th percentile, which essentially means that of all fullbacks in Europe, a whopping 83% perform better than him.

Is the risk worth the reward? Absolutely not. Interfering with youth is problematic enough, but performing like this in his original spot, and being this atrocious in his defending, only for him to earn more than both Joshua Kimmich and Virgil Van Dijk, players who are each amongst the best in their craft, is unacceptable.

At this point, one seriously needs to question how he manages to start games on a consistent basis. Is the Remontada goal? Or the run he made before Lionel Messi scored the winner against Real Madrid? Or — as sad as it sounds — is it the fact that he is the last La Masia talent to make it to the Barcelona first team for a long-term period? Whatever the reason, he needs to depart immediately, and Emerson is more than adequate a replacement for him.

A brief look at Emerson Royal

Emerson Royal is a footballer co-owned by Barcelona and Real Betis, having arrived at a deal with Brazilian club Atletico Minero back in 2019. Thanks to his exploits in the green and white of Betis, he has garnered comparisons to countryman Dani Alves, generating interest from both Paris Saint Germain and Arsenal ahead of the summer transfer window.

The Brazilian excels both as an inverted fullback, where the main aim is to ensure a safe ball progression, as well as in his more offensive roles as a makeshift winger. His clever movements centrally serve to juxtapose those of his wingers, as he has a firm understanding of how best to make positional superiorities on the ball.

In attack, Emerson is gifted in making early crosses into the box for his forwards, as well as making overlapping runs into space. As an instigator for attacks in the final third, this has culminated in him scoring four goals and providing ten assists in his last two seasons for Los Verdiblancos in La Liga; numbers that will surely see an increase once he makes the switch to the Catalan capital.

In terms of his defensive numbers, he is nothing short of remarkable. Thanks to his understanding of his space, coupled with his impeccable positioning in the right flank, Emerson has a combined total of 137 tackles + interceptions, one of the highest in all of La Liga Santander, remarkably superior to that of even Casemiro. He averages three clearances and three interceptions each per game, both firmly above the 80th percentile, and in a Barcelona side where defensive struggles are commonplace, a figure such as his offers a desperately needed solution to a long-standing problem.

Many have concerns that his arrival would be problematic for Sergino Dest, as the American would have far too much competition, but a lack of the same would foster an air of complacency. And complacency breeds players like Sergi Roberto.

Far from the most solid figure defensively, the USMNT fullback would have to step up his game in a battle for the survival of the fittest. The 20-year old is yet to firmly establish himself in the starting XI, as every step forward is quickly followed with another back.

With Emerson, Barcelona would have an individual with just 22 years of age and a ceiling that far surpasses anything that Roberto could offer in the right-back position. The rumours to Paris should cease as soon as possible, as this is a talent Barcelona cannot afford to lose.