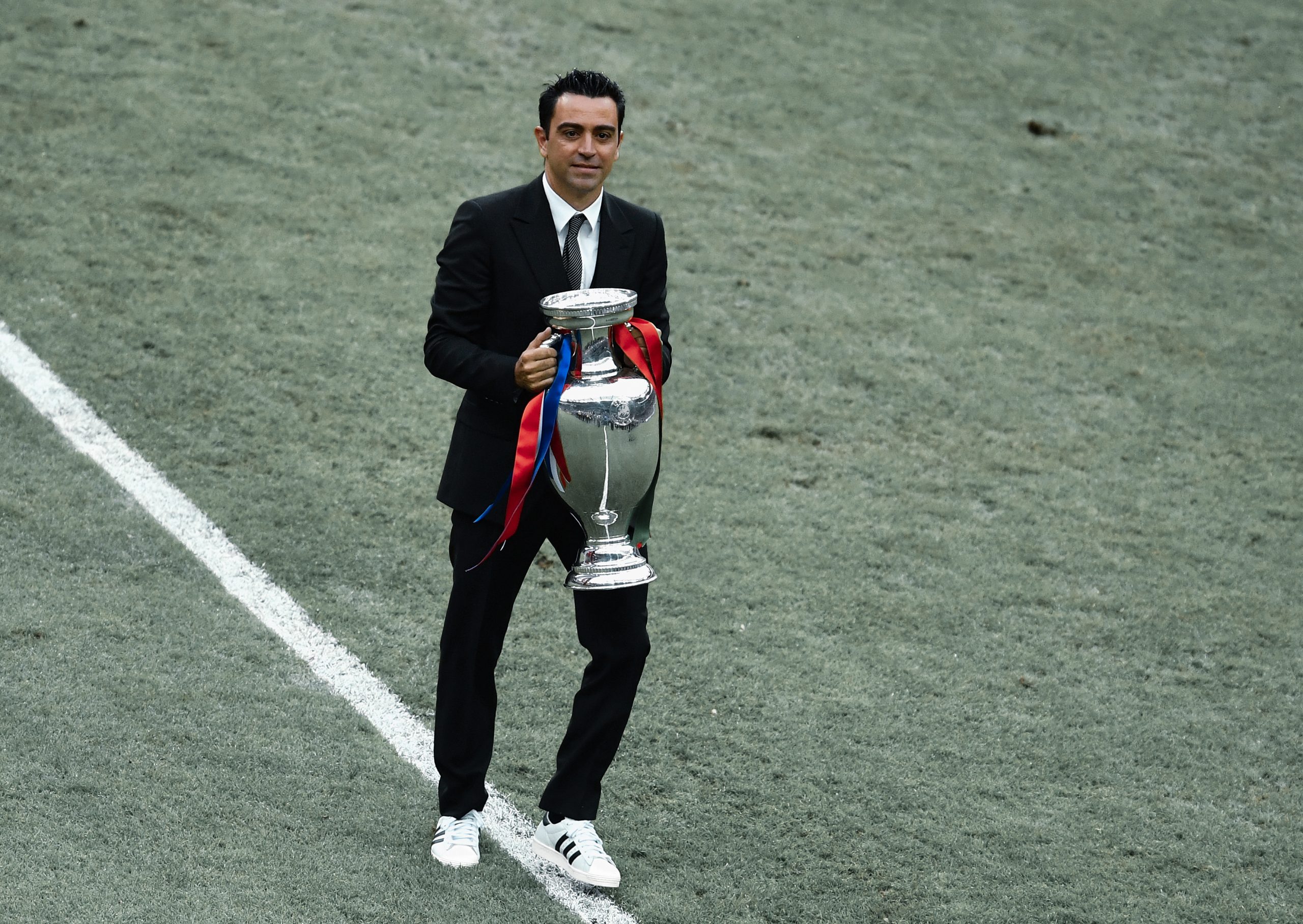 It was Rinus Michels who taught Johan Cruyff the ways of total football, how to manipulate space and fluidity to beat any opponent. It was Cruyff who then passed it down to his prized pupil Josep Guardiola.

Showing that these principles stand the test of time, Guardiola used them to help Barcelona dominate the world, with a certain Xavier Hernandez Creus at the heart of it all.

Driven by our intrinsic love of fate and story, the idea of Xavi carrying on the Michels-Cruyff-Guardiola legacy has become something most culés dream of. Xavi’s return symbolizes a return to Barcelona’s roots and a chance to fulfill destiny.

Some see the parallels to 2008, where a young, bright-eyed manager in Guardiola was brought in to revitalize a waning team. Others foresee a Frank Lampard or Andrea Pirlo situation, where inexperienced club legends could not handle their first big jobs.

Going in-depth into tactics, managerial style, and results, what can we expect from Xavi’s Barcelona? Will he fill that long-vacated managerial throne?

A Leader on and off the Pitch

Born and bred in Barcelona, Xavi made his first-team debut for his boyhood club in May 1998. For the next two decades, he would reach heights previously unheard of, both internationally and at a club level.

He was at the heart of Barcelona’s midfield, notably winning four Champions Leagues and eight La Liga titles; he helped guide Spain to the 2010 World Cup and Euros 2008 and 2012.

After leaving Barça in 2015, Xavi made his way to Qatar to play for Al Sadd. Four seasons and two trophies later, he became their head coach.

He was a puppet master on the pitch, a player with a sixth sense and third eye. He was the master of La Pausa, the innate ability to control the tempo of the game, capitalizing on slow defenders leaving plenty of open space. Stylistically or statistically, by sheer impact or influence, any way you cut it, Xavi was one of the greatest players of all time.

While Barcelona will not be getting Xavi “the player”, Xavi “the manager” is not devoid of praise.

He has transformed a quality Al Sadd side into a considerably greater powerhouse in Qatar, winning seven titles in two years while playing a style of football emphasizing possession and urgency, width and close-control. His teams are fluid with the ball, often utilizing a 3-4-3 (3-4-1-2) or 4-3-3, and are swift to win possession back.

It is a tactical approach that exudes everything you expect from a disciple of Pep Guardiola and admirer of Cruyff’s “Total Football”.  Featuring in a recent video from The Coaches Voice, Xavi said, “The most important, the most beautiful, and the most precious thing in football is to have the ball, to attack and dominate the game with the ball.”

At Barcelona, one can anticipate all of these principles to be at the forefront of Xavi’s reign. Of course, the Catalans still attempt to play a possession brand of football now, but it is sluggish, slow-paced, and unimaginative.

Barça desperately need urgency in their buildup; way too often, they build slowly, allowing the opposition to settle and get into their defensive shapes.

Additionally, the ingenuity required to pick apart low blocks has been severely lacking. The Catalan’s go-to move has been to bombard the box with crosses, playing to nobody’s strengths.

Without a doubt, all the players have the tools necessary to excel in a different style, but they need the right mind to help them unlock it. Expect Xavi to do just that.

In buildup or attacking areas, one thing is vital for Xavi: width. Keeping full-backs and wingers on the touchlines stretches out opposition, giving space for midfield interiors or inside forwards to exploit.

Given the relevant breadth of talent at his disposal in Qatar, Al Sadd often face low-blocks or teams willing to sit back and play quick counter-attacks. Numerical superiority and off-ball movement become especially pertinent in these situations, and Xavi has instructed his teams with patterns of play to break down such opponents, whether quick one-twos that isolate defenders or third man runs that create space.

While he has become comfortable employing a 3-4-3, one can bank on him using a 4-3-3 with the garnet and blue. Despite the seeming differences between the formations, they stimulate the same tactical principles, thus the transition should be seamless.

In fact, Barcelona’s 4-3-3 often morphs into a 3-4-3 in attacking phases, with the pivot dropping in between the two centre backs and full-backs moving into the midfield line. As Xavi himself stated, “Regardless of the [formation], in the end, the most important thing is the philosophy.”

Rather than implementing laissez-faire instructions, Xavi will assuredly instil tactical discipline that should help Barça’s myriad of youngsters, in particular, to develop.

“I have learned many things from many coaches. Now I make them mine as well,” Xavi said in a 2020 interview with BeIn Sports.

Xavi has not only absorbed tactical philosophies from his previous teachers but also man-management and how to treat his players. He was heavily influenced by the late Luis Aragonés, his manager for the Spanish National Team from 2004 to 2008.

Arangonés instilled confidence in a young Xavi and became a mentor for how to play the game.

In the aforementioned interview, Xavi remarked, “I tell the players that I am here to help them. The door will be open 24/7, for anything.” With Barcelona’s abundance of starry-eyed youngsters, expect Xavi to be a guiding hand on and off the pitch. His leadership style is one of open communication and honesty, preferring the carrot over the stick.

Xavi’s main detractors often argue, “how will he manage players he once played with?” Sergio Busquets, Gerard Pique, Jordi Alba, and Sergi Roberto – Xavi has shared the pitch with every one of them.

Will he give them more leniency and room for error? With Al Sadd, Xavi has already had experience managing players he once played with. Speaking on this issue, he said, “I try to be as fair and natural as possible. If you train well, you will have the opportunity. If you don’t train well and don’t have an attitude or respect, you will have it very difficult with me.”

One thing is for certain, Xavi’s return will welcome a meritocratic environment. To those who deserve it, playing time will be given. Hopefully, the many fractured player relationships that defined Koeman’s era are long gone.

With set expectations of tactics and a managerial approach, what kind of players will exceed under his tutelage? Furthermore, how might he operate in the transfer market?

Starting in goal, Marc-Andre ter Stegen will provide everything Xavi needs from his goalkeeper — at least in possession. The German’s ability in possession will be as crucial as ever. Perhaps Xavi may also further utilize his long-range passing to provide dynamic and direct counter-attacks.

The necessity of ball-playing centre-backs is understood, and Barcelona have them in abundance. Quantity over quality, that is. However, Xavi’s sides often play with a high line of engagement, requiring defenders with plenty of pace and power.

Ronald Araujo fits this description perfectly, while others such as Gerard Pique or Eric Garcia may be sidelined. Reports have indicated Xavi’s interest in Sevilla’s Jules Kounde, but price remains a hurdle.

At full-back, Sergiño Dest, Oscar Mingueza, Jordi Alba, and Alejandro Balde all provide natural width and make an impact in the final third.

The Catalans have plenty of centre-midfielders at their disposal too, of which Xavi will surely revel in. Culés will keep a close eye on Riqui Puig, many of whom hope can finally break out and have a consistent first-team role.

Up front, Xavi will make full use of Ansu Fati, a player who can leadBarcelona’ss frontline for years to come. Ousmane Dembele is another player who Xavi is reportedly a fan of, although questions regarding his injury persist – and dondon’tok like disappearing anytime soon.

Consequently, Xavi could target Raheem Sterling, the out of favor winger from Manchester City who can provide a threat from wide that the manager desperately wants.

In all, Barcelona’squad has the makeup and characteristics Xavi needs to play his preferred brand of football, but extra reinforcements cacan’tome soon enough.

Last but certainly not least: results. Will Xavi be able to transform this muddling Barcelona side into world beaters? Can he bring the best out of footballers who have curiously excelled individually with their national teams? It goes without saying that results wowon’tome immediately. There will be hardships and potentially sizable losses, but so long as progress is being made, that is all that matters.

Specifically, a top-four league finish is realistic (and necessary) as well as getting into the latter stages of the Copa del Rey. Whether the Catalans progress to the Champions League Round of 16 (by winning one of their last two matches) is ananybody’suess.

Barcelona need a distinct identity to give guidance and structure, not to mention to set in stone a long-term project. Ancient Roman philosopher Seneca once said, “If one does not know which port to sail, no wind is favorable.”

If Xavi can work on improving slowly but surely, day by day, then temporary setbacks won’t matter in the long-term. Barcelona must find their port to sail, and expect Xavi to do so.

A pessimist might say that great expectations can ruin something before iit’seven begun; that setting lofty aspirations will only set up disappointment. As the old adage goes, “Expect nothing and you’ll never be disappointed.” But an optimist would ask if that is how we want to start anew in this forthcoming era. Where is the fun and excitement in reaching for the stars?

In between these positions is a middle ground we should operate in. It is one that has manageable expectations, without being too outlandish. After all, every dreamer needs a realist by their side. Culés should expect positive change on all fronts, whether with tactical discipline, player development, or even the new medical team the manager hopes to bring in.

Yes, Xavi could have gained more experience before coming to Barcelona. And yes, he may struggle for a while to come. But there is no better time than the present.

Renewal, resurgence, and resurrection are sitting behind a locked door. Xavi has the key; he just needs patience to unlock it.