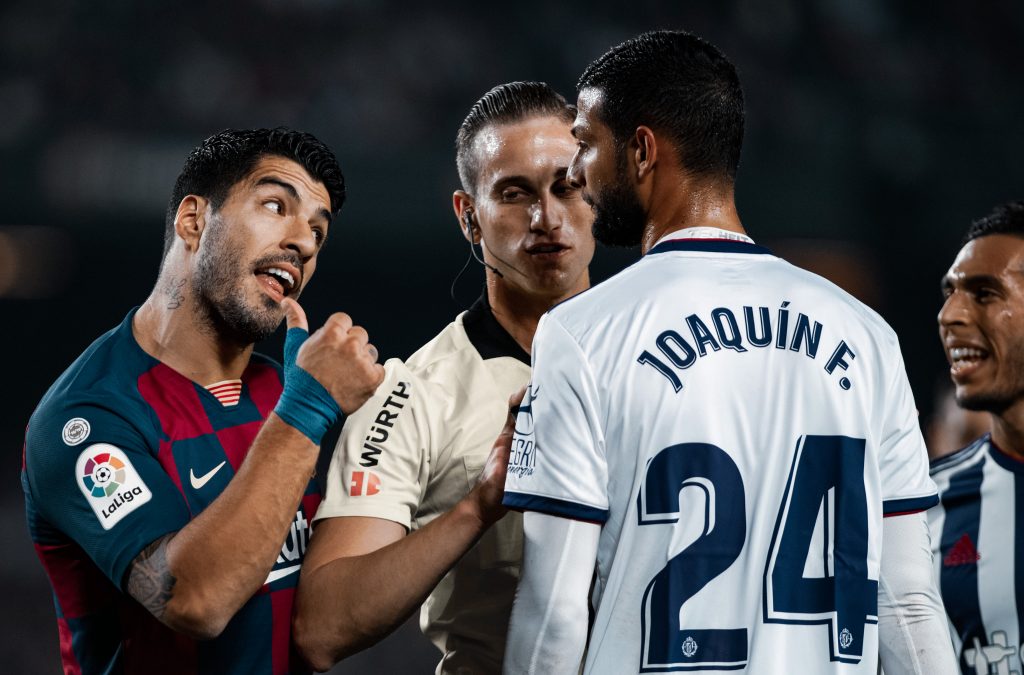 Three games remain in the La Liga campaign with Barça needing to win all three and hoping for two Real Madrid slip-ups in order to win the title. In the 36th matchday of the gruelling title race, Barça travel away to the José Zorrilla Stadium. Here’s the preview of the match between Real Valladolid and Barcelona.

The title race this season is going to the wire. Barcelona’s 1–0 win over Espanyol on Wednesday may not have been the pleasant experience fans expected, but it gave them the three points. After all the hype over the 1–4 victory at Villarreal a week ago, the performance at home was disappointing. Espanyol’s 5–4–1 low block troubled the Catalans, with most of the dangerous chances coming from the visitors. Barça were lucky to get away with the three points in the expense of getting their neighbours relegated.

Since the restart, Barcelona have been jumping back and forth from Camp Nou to an away game every other matchday. So, following the trend, they travel to Valladolid this time after the fixture at home. The hosts sit at 14th in the table making a good case for themselves to escape relegation for the second year in a row. To mathematically secure themselves, they need only a point from the three remaining.

The duel, understandably, is more important to Barcelona than Valladolid. The reverse fixture saw Ernesto Valverde’s Barça trash the then-visitors for five goals to one. However, away from home, the same kind of scoreline or performance is a far cry. As much as the three points are crucial, Barça must fix a system which gets the maximum possible performance from the players.

What to expect from Real Valladolid?

Real Valladolid almost always line up in a 4–4–2 in which the players remain in their half defending deep. They have conceded the least among the clubs in the bottom half of the table. The compact defending and the pragmatism has resulted in them searching for goals often. That does not mean that they have deficient attackers. The strikers are quick, tall and are not afraid to have a go. Sergi Guardiola, Enes Ünal and former Barça striker Sandro Ramírez are all capable of troubling the visitors on the break.

“Our goal is to achieve as many victories as possible, because we want that avoiding relegation is on our own merit”

Now, after witnessing the Espanyol game, they might choose to add an extra body in midfield packing the central areas. Valladolid tend to use the flanks well, and Barça’s formation fits right into their strength. With the full-backs up the field providing width for the blaugranas, the hosts might try to release long balls to runners out wide. The tactics worked for Espanyol as the Barcelona centre-backs are relatively slow.

Understandably, Valladolid will play without possession, maintaining their shape and trying to block off attacks down the middle. Nevertheless, they are without the service of Mohammed Salisu and Míchel Herrero, with both of them out injured. The former has been a constant in the back four and the later being crucial in sending out-balls.

Barcelona hoped to gain momentum after that exciting display at Villarreal. But, the Derbi barcelonés muffled everything. Like always, Barça struggled against the low block, failing to create and being vulnerable at the back. With Sergi Roberto and Iván Rakitić in midfield, there was very little creative output as there were very fewer transitions involved. With no genuine winger involved, and the full-backs underperforming, the Barça attack got easily nullified.

“Valladolid is not entirely saved [from relegation] and will try to [secure their safety] in this match. We have to win, yes or yes. We have to be focused and attentive. They are not going to make it easy for us. We may have to get to the last match [of the season] to have the option of winning La Liga”

While the new formation brings all of the MSG attacking trio – Lionel Messi, Luis Suárez and Antoine Griezmann – into the picture, it fails to provide width. But, with Ansu Fati suspended after picking a red card, Quique Setién may once again go with the same unless he decides to trust Martin Braithwaite. The bright side is that he can tweak the formation and personnel to achieve better while playing his best three attackers. By playing Riqui Puig, he can add extra creativity in midfield. Sergi Roberto can move to right-back, where he can utilise the space ahead of him and progress the ball.

The squad list for the game is shorter than the regular one, as most of the Barça B players are unavailable as they prepare for their play-offs to the Second Division. Only Riqui Puig, Ronald Araújo and goalkeeper Arnau Tenas, from the Juvenil A, are present. The restricted matchday squad calls for fewer options from the bench. Samuel Umtiti, Arthur Melo and Frenkie de Jong are out injured, and Ansu is out serving a suspension. Setién also must not forget to rest his star players like Lionel Messi, Gerard Piqué, Sergio Busquets and Jordi Alba as they have been playing continuously since the restart.

“I love Piqué when building up from the back, Ter Stegen, Busquets, who is differential, and Messi, who makes all the difference in the final third”

• Barcelona are undefeated in their last nine La Liga games

• There have been under 2.5 goals scored in 16 of Real Valladolid’s last 20 home games in La Liga

“He doesn’t have minutes now but he can have them. His involvement is the same. He tries to give his best in each training session. We are going to need everyone”

A win for Barcelona would be the expected outcome. It is indispensable for Barça, and for Real Valladolid a defeat would be far from the end of the world. Meanwhile, a victory for the locals would be dramatic for the azulgranas, and a “cherry on top of the cake” for the Pucelanos, as coach Sergio González described it.

Possibly Barcelona’s main difficulty on Saturday will be to break the compact block of Valladolid, who have the seventh best defence in the league but the third worst attack. Still, if the hosts learn from Barça’s last game against Espanyol, they could aim to exploit the Catalans’ gaps at the back through counter-attacks. That said, for quality and necessity, there is a clear favourite. The writer’s prediction: 0–3 for Barcelona.