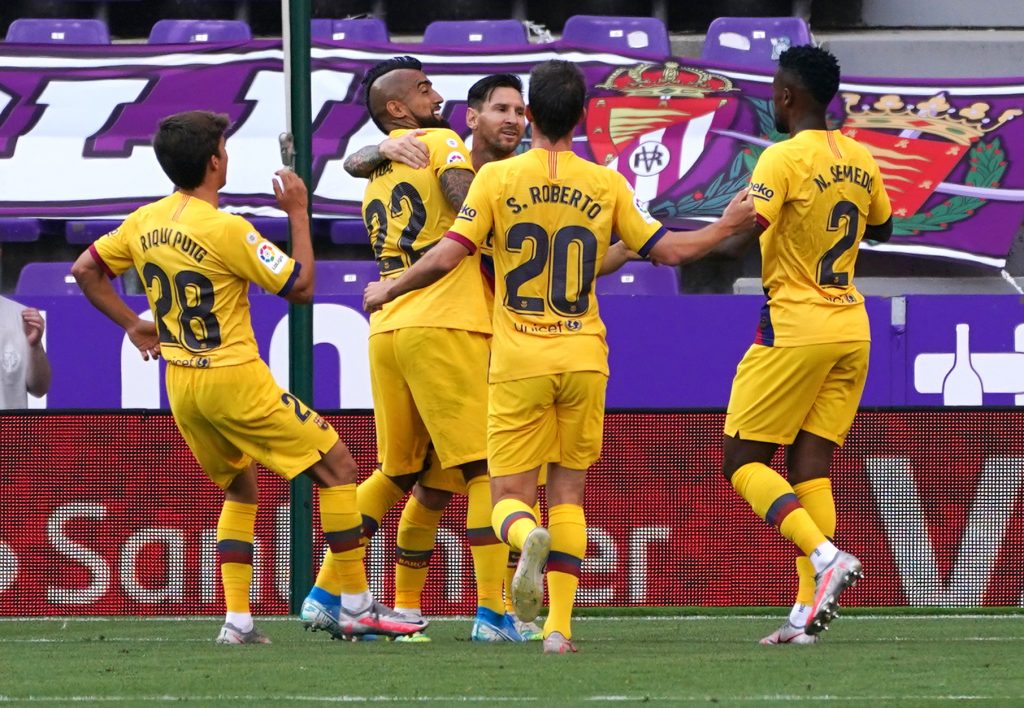 A match summary / review of the Real Valladolid 0-1 Barcelona game.

Barcelona has nothing left but to continue fighting a clash against one of the teams that have conceded – and scored – the fewest goals in the campaign. The meeting today at the José Zorrilla may seem like a difficult mission unless Quique Setién plays with the best he has.

FC Barcelona started the game under control. Roberto joined Piqué and Lenglet as centre-backs tonight, with Semedo and Alba as wing-backs. In the 5th minute, the first shot on goal came from Riqui Puig after Semedo reached the youngster. In the 15th minute of the game, Arturo Vidal scored a brilliant goal, with Lionel Messi making the assist.

The game continued under Barcelona’s domination in possession, with Griezmann having another chance in the 19th minute of the game. The Frenchman was completely free for a tap-in, but he missed the ball. Semedo similarly had a chance to score after a brilliant pass by Busquets in the 24th minute, but Masip saved his effort brilliantly.

? — Lionel Messi is the first player to have 20+ goals AND assists in a single season since 2002/03. Genius. pic.twitter.com/EqkDcpEOsn

Ter Stegen stepped up in the 37th minute of the game once again and prevented Kike Pérez from equalizing. Five minutes later, Lionel Messi’s first effort on goal went some curled inches wide.

Overall, Barcelona dominated the game and produced more chances compared to the last game. Setién’s new 3-5-2 system seemed quite effective, but it is too early to draw conclusions yet.

After a poor first-half performance, Antoine Griezmann is replaced by Luis Suarez in the second half of the game. In the 49th minute, Riqui Puig got another shot on goal, but it was easily saved by Masip. In the 57th minute, Setién played two new cards on the field, replacing Puig and Lenglet with Rakitic and Araujo.

Barça seems to have gone down a gear compared to the first half. In the 61st minute, Valladolid had its closest chance on goal from a header by Enes Ünal tipped wide by Ter Stegen. A minute later, Messi whips a freekick on target, but former Barça keeper, Masip, makes the save once again. He has been outstanding tonight in the Valladolid goal.

Barcelona struggled to create chances, similar to the problem in earlier games. From minute 65 to 70, Valladolid took control over the ball. In the 71st minute, Suarez called for a penalty, but referee Mateo Lahoz did not appeal to VAR. 5 minutes later, Piqué got taken down in the penalty area, and again, the referee did not believe there was a penalty. Piqué laughed after the incident – he got used to such calls by now.

Gerard Piqué is discussing with Mateo Lahoz. The defender believes that he should have appealed to VAR and that there was a penalty on him.

In the final part of the game, Barcelona again failed to create, and Valladolid came multiple times crossed the ball towards the goal. Ter Stegen has been very alert as usual, thus the efforts were cleared comfortably.

Barcelona gets the three points away against Valladolid in a game where they had fewer shots than their opponent. Still, Real Madrid has to drop points twice. Otherwise, they will be champions for the first time since 2017.

That brings an end to the Real Valladolid vs FC Barcelona match summary.