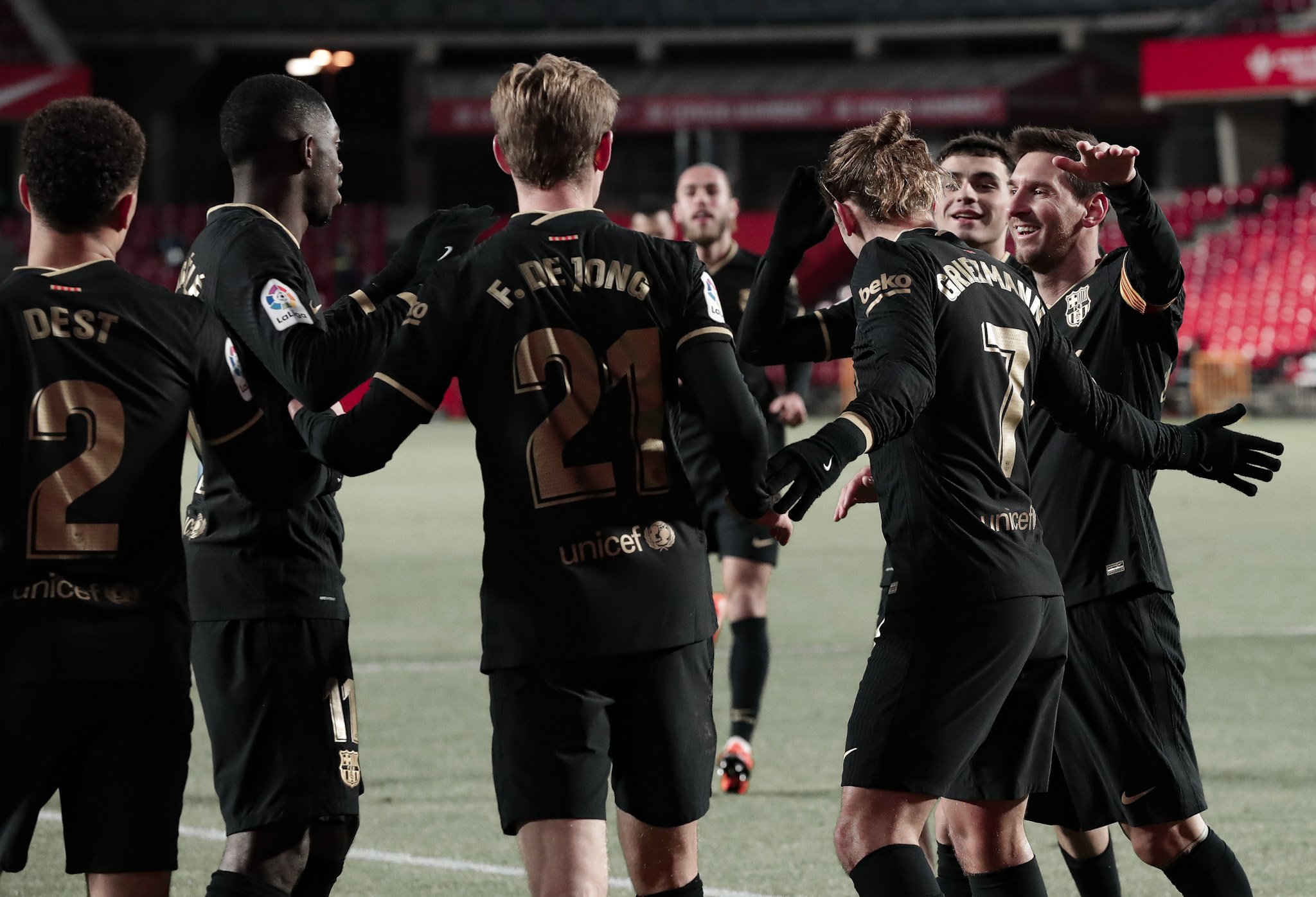 After dispatching third-division side UE Cornellá in the last round of the Copa del Rey, FC Barcelona will travel to Madrid on Wednesday to play Rayo Vallecano.

Competition: Copa del Rey, Round of 16

They say luck is when preparation meets opportunity. When both Real Madrid and Atlético Madrid were eliminated in the previous round of the Spanish Cup, many cúles were hopeful that the path to silverware had just gotten much easier. Although heavy hitters Sevilla, Real Sociedad, and Athletic Bilbao are still in the competition, the Catalans should be feeling lucky with their odds.

Barcelona are coming off a 2-0 victory against Elche over the weekend, and although their title hopes in La Liga are relatively intangible, winning the Copa del Rey is more palpable than ever. Nevertheless, while it may seem like their trophy to lose, Barça must remain entirely focused on the task at hand.

Rayo Vallecano are currently sitting fourth in the Spanish second-division. Filling out the Round of 16 are eleven La Liga teams and five outside of Spain’s top flight, including Vallecano. The Madrid-based side were dispelled in the Round of 16 round last year by Villarreal, so they will be hoping to upset the Catalan giants tomorrow night. Interestingly, Vallecano defeated Elche 2-0 in the last round of the Cup, and Barcelona beat Elche by the same scoreline a few days ago.

Given the importance of this competition in Barça’s hunt for silverware, one can expect manager Ronald Koeman to opt for a strong starting eleven. On the other hand, the Blaugrana have a riveting match against Atheltic Bilbao on Sunday, the same team that beat them in the Supercopa Final a few weeks ago, thus some players can be expected to rest. Three of Barça’s last four games have gone to extra time, so Koeman will be hoping his team can put tomorrow’s to bed in 90 minutes.

Substitute goalkeeper Neto will likely start in goal as Koeman may use him for most Spanish Cup fixtures.

At right-back, Sergiño Dest was a last-minute scratch from the squad list due to a lingering thigh injury. In the young American’s stead will be Oscar Mingueza. Although Mingueza lacks the flair and final delivery of Dest, he should perform admirably against Vallecano. At center back, Samuel Umtiti was given a rare start midweek against Elche, so it’s probable that he stays on the bench for this contest. Koeman favors the center-back pairing of Ronald Araújo and Clément Lenglet and given that the Frenchman only came on as a substitute in the weekend game, he should return to the lineup. At left-back, Junior Firpo will slot in for Jordi Alba who will most-likely be rested for Sunday’s big match.

Sergio Busquets is suspended for Barça’s league fixture against Bilbao, thus he should start against Vallecano. His metronomic passing and composure should help the Catalans dictate tempo and control the game. Frenkie De Jong (one goal and one assist) and Riqui Puig (one goal) made all the headlines this weekend after their dominating performances. Nonetheless, De Jong should be rested for Miralem Pjanic while Riqui Puig may earn a start.

Up front, Lionel Messi is set to return from his two-game suspension and should get the start. Messi has played ten matches against Vallecano and has won all of them as well as scored 17 goals. Francisco Trincão played admirably over the weekend and he will likely start at right-wing. Ousmane Dembele and Antoine Griezmann may be rested, giving Martin Braithwraite the final starting spot.

What to expect from Rayo Vallecano?

Rayo Vallecano will be hoping to cause a huge upset tomorrow night, but it will be extremely difficult all the same. Manager Andoni Iraola has brought them to fourth in the Segunda Division table this season, and a promotion back to La Liga is not entirely out of the question. Iraola also managed second-division side Mirandés all the way to the semifinals of this competition last year. Is another Cinderella story in-sight?

Vallecano have shifted between a 4-4-2 and 4-2-3-1 this season. They have been on an impressive run over the last two months. Other than their defeat at the weekend against Mallorca, they won their previous six games in a row and were undefeated in their last eight. In fact, Los Franjirrojos have only lost twice since November 16.

In goal, Macedonian shot-stopper Stole Dimitrievski looks to start. Rounding out the four man defense in front of him should be Alejandro Catena and Esteban Saveljich, with Lucia Advincula and Francisco Garcia at full back. Mainstay Emiliano Velázquez will be missing out on the game due to injury.

Up top, look for ex-Manchester United forward Bebé to start alongside Isaac Palazon and Alvaro Garcia. Andrés Martín may come off the bench, and he’s tallied six goals and five assists this season.

Fascinatingly, according to soccerway.com, Vallecano have scored 36% of their goals in the league this season during the final 15 minutes of the game. Barca have struggled to keep focus for the full 90 minutes of matches in the past, so they’ll need to be on high alert here.

Óscar Trejo is Vallecano’s player to watch. He typically plays in the number ten role behind a striker or in central midfield as part of a double pivot. The Argentine is leading his team in tackles won per game (1.84) and averages 1.35 interceptions per game. He scored his first goal of the season on January 19th against CD Mirandes. Trejo influences Vallecano’s build up and transition play well as being a hound on defense. Barça’s midfield trio, particularly Busquets in the holding role, will have to keep an eye on him.

Barcelona should extend their impressive winning record over Vallecano and advance to the quarter-finals of the Copa del Rey. Expect Lionel Messi to return on the scoresheet. 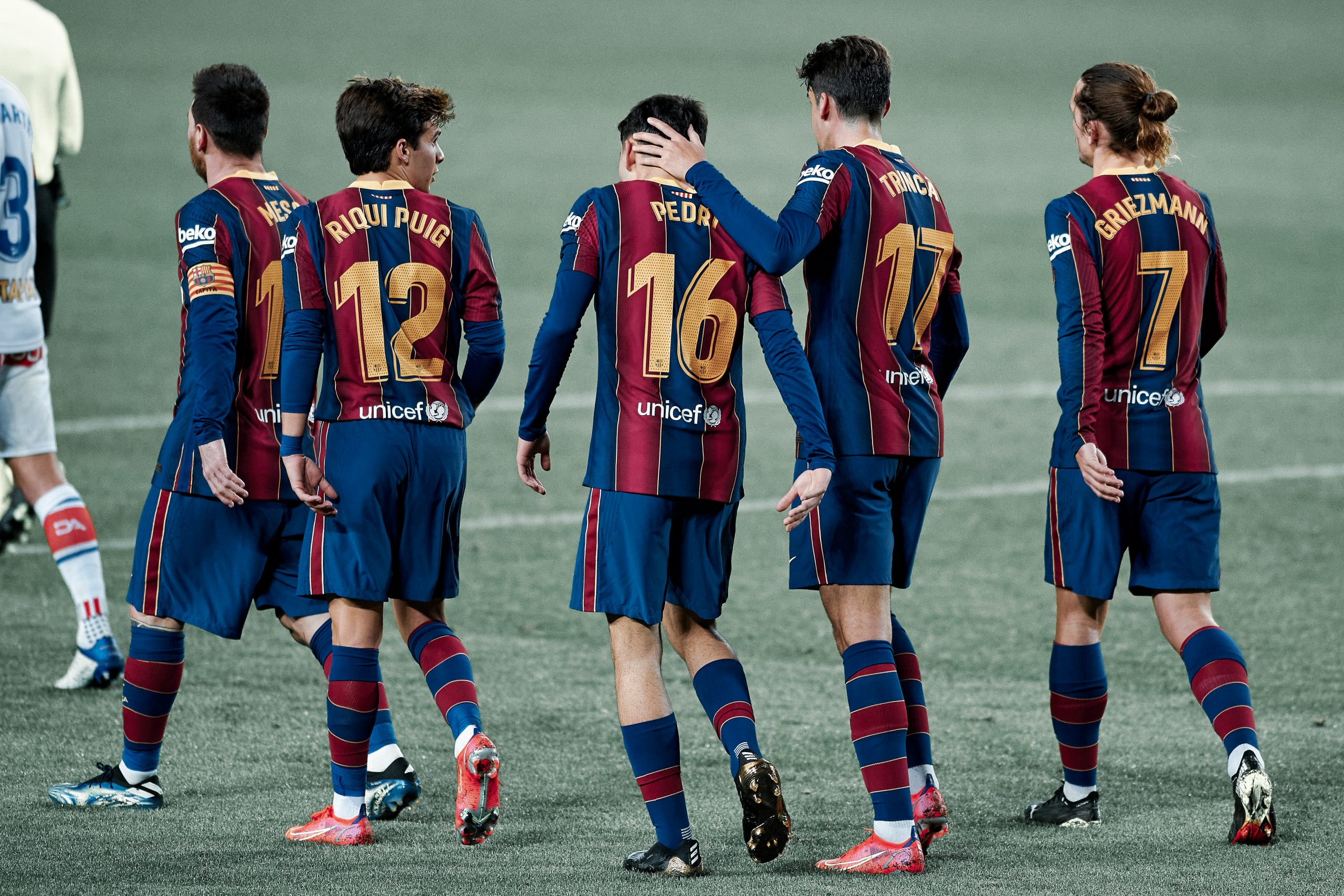 Heading into the back to back clashes against Sevilla can surely not be easy for Ronald Koeman. The 2-0 defeat at the Ramon Sanchez Pijzuan is undoubtedly fresh in the minds of players, one that cannot be forgotten easily.

Action returns on Saturday in La Liga, once again in the stadium that the Catalans recently lost blood in. Points on the League at this stage are vital, and Barcelona cannot afford to let their guard down. Here is how Barcelona could lineup against Sevilla

In goal once again, Marc Andre ter Stegen will continue to star for the Blaugranas. The German has been absolutely vital and stellar once again for his side. Needless to say, his performance on Saturday will account for so much of the result.

Gerard Pique has started three in three games since his return from injury and looked fit as ever. The Spaniard has indeed endured a mixed start, yet not one with mistakes highlighted.

Alongside him will likely be Ronald Araujo. The Uruguayan finally returns from injury, and the boost couldn’t come at a better time for Barcelona. Araujo will be crucial for the upcoming decisive clashes in the Catalans schedule.

Sergino Dest will return to his duties at right-back, given the weight of the coming clash. Up against the fourth-placed side in the league, Barcelona will have to be equally effective in creating chances from both sides. Something for which the American international’s top form is a necessity.

Jordi Alba will continue to be deputed at left-back after his performance against Elche added yet another goal to his season. The left-back has been renewed indeed and will be vital against Sevilla.

With Miralem Pjanic out through injury, Sergio Busquets will almost certainly start for Koeman’s side on Saturday. The midfielders guile and creativity will be the need of the hour at the Ramon Sanchez Pijzuan.

Busquets will likely be accompanied once again by Frenkie de Jong and Pedri. Over the past few months, the duo has cemented their place in Koeman’s Gala XI and rightfully earned their spot.

While de Jong’s advanced role is very conspicuous, Pedri has been working harder than ever in the shadows. The youngster has been heavily involved in retrievals, a facet which Barcelona heavily lacked in recent years.

Fransisco Trincao could not register himself on the scoresheet at the Camp Nou midweek but still had a fantastic performance. It was only a brilliant save from Edgar Badia that denied the Portuguese another feather in his cap. He will start on the right-wing.

Lionel Messi will once again look to lead from the tip of the spear as he continues his sensational goal streak. The La Liga top scorer just cannot be stopped at the moment, and once again, all eyes will be on the Argentine to make the difference on Saturday.

Antoine Griezmann was rested against Elche and could make his highly-anticipated comeback in the coming game. Though the dawn of the new century has borne well for the Frenchman, the last few games have seen him slightly get on the wrong foot. He will undoubtedly be looking to get back on scoring terms against Sevilla.

Riqui Puig on the bench could be a candidate for Koeman to turn to. The La Masia graduate has time and again upped the tempo of the Blaugranas game, providing last-minute firepower that is often invaluable.

Martin Braithwaite pulled off an amazing show against Elche, with two sumptuous assists to be proud of. The Dane could once again be called up against Sevilla to make a difference in the latter half of the game.