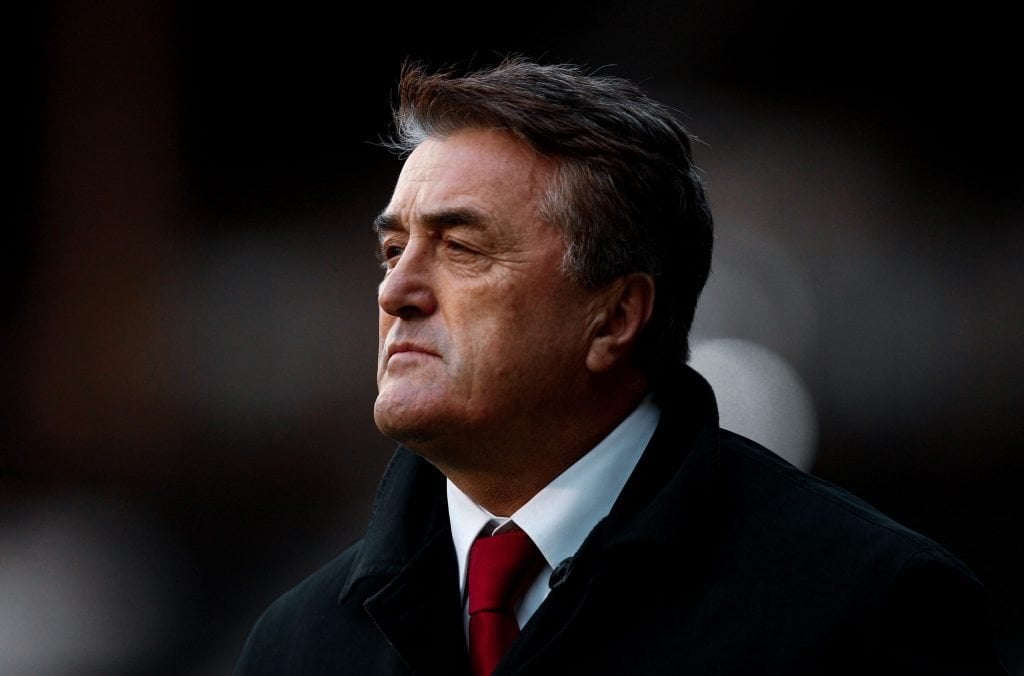 Radomir Antić, the only coach in history who managed all three of Real Madrid, Barcelona and Atlético, passed away on Monday. We review his short but impactful 6-month spell at the Camp Nou.

The 2002/03 season was one most chaotic at Barcelona in recent history. It was also the last and the least successful campaign with the highly questioned president Joan Gaspart ahead of the club. In the summer of 2002, Louis van Gaal returned to the club after his stint between 1997 and 2000. He succeeding Carles Rexach, who was often criticised for his soft trainings. So Gaspart presented Van Gaal almost as their saviour, hiring him, among other things, for his heavy-handed approach. He did not seem to remember, though, that Louis had left two years earlier following a trophyless season.

“I ask everyone for help. I am conscious that not everyone is happy with my return, but if we are all in the same boat, success will arrive”
–– Louis van Gaal, in his presentation in 2002, with a dose of plea and optimism

During his former tenure, Van Gaal and star Rivaldo had fallen out, so, when the Dutchman came back, controversy increased. Rivaldo, 1999 Ballon d’Or winner, was nearing his thirties and had recurring injuries. Fame seemed to have got too much into the Brazilian’s head. Therefore, when Van Gaal returned in 2002, the boss saw himself with enough transcendence to take revenge: he released Rivaldo on a free transfer. Meanwhile, the ex-Ajax coach had a say in many signings too. Among others, he bought Robert Enke, Gaizka Mendieta and Juan Román Riquelme. They all disappointed. “You are the best player in the world with the ball at your feet, but, without it, we play with one less player”, Van Gaal would say to Riquelme. Not many footballers suited his strict demands.

Thus, with Van Gaal’s scrupulous habits and suffocating tactics, neither the individuals nor the team performed as expected. A record-equalling ten consecutive Champions League victories gave him some oxygen until Christmas, but in La Liga Barcelona had its worst start since 1991. With the limitations in the squad, Van Gaal experimented with several formations, always remaining true to his principles. After 19 matches in the league, though, the blaugranas were 12th in the table. Only 3 points separated them from the relegation zone. Moreover, they had been knocked out of the Copa del Rey in the first round. Van Gaal left the club by mutual consent on 28 January 2003. The main positive from Louis’ second stint at Barça had been the debut and introductory performances from Iniesta, which brought some hope before the manager’s dismissal. Later, in February, with the asphyxiating pressure, president Joan Gaspart would tender his resignation and call elections for the summer.

In January 2003, Barça searched for a coach. Someone to rescue them. And, if possible, to rescue Riquelme too. The Argentinian César Luis Menotti was the main candidate. Nonetheless, in the end Radomir Antić was the chosen one. He had previously coached Real Madrid from 1991 to 1992, when he was surprisingly sacked when Los Blancos held a 7-point margin on top of La Liga. Without him, Madrid would end up squandering such big lead as Barcelona won the league and the European Cup in 1992. Still, it’s his time at Atlético that Antić was most renowned for. In the season prior to his arrival to the colchoneros in 1995, Atleti had finished one point above relegation. Even so, in his first course with the rojiblancos, Radomir took them to a historic La Liga and Copa del Rey double. He still is the only coach to have achieved it for Atlético. After departing in 1998, Antić would return to the Calderón twice. Notwithstanding, in 2000 he could not prevent them from dropping to the Second Division – the same fate his Real Oviedo would suffer later.

So, by 2002, Antić was a coach that had achieved enough success throughout his career, but whose latest experiences had been bitter. Following one and a half years of inactivity, Rado was named Van Gaal’s replacement. It proved to be a wise choice. The Serbian did nothing sophisticated. In fact, quite the opposite: he simplified the tactics. Contrary to Van Gaal’s discipline, Antić was more permissive with his players. He naturalised the system and controlled the situation. He used a lower 4–4–2, moving Mendieta to midfield, Reiziger to right-back, Saviola closer to the area and Riquelme to the starting line-up. Furthermore, the youngsters got benefitted from his landing too. Valdés was the initial starter for Van Gaal, but after some poor displays he was sent back to Barça B. Nevertheless, he was back to the XI with Antić. Xavi was moved higher up the pitch and given more freedom, and Iniesta thrived as well.

Radomir managed to turn things around. Barcelona beat comfortably sides like Inter and Valencia, and finished in a respectable 6th position in La Liga – respectable if we consider that they had been placed in 15th at some point in the season. While the azulgranas lost in extra time of the Champions League’s quarter-finals to Juve, they qualified to the following term’s UEFA Europa League. With his very positive six months at the club, Enric Reyna, president between February and May, renewed Antić. Yet, despite his renewal, when Joan Laporta won the elections in the summer he decided not to keep Antić as he appointed Frank Rijkaard ahead of the 2003/04 course.

“Antić has left us, a man who brought dignity to the profession of a footballer”
–– Fernando Torres, on Monday

In spite of his brief period at the Camp Nou, Radomir won the hearts of all culés. That’s why the news of his death on Monday, following a long battle with a serious illness, have caused a flow of emotions across Spanish football. With a substantial trajectory as a footballer and a honourable 27-year managerial career, making his greatest impact in Spain, Radomir Antić had won the respect of all Barcelona, Madrid, Atlético and football fans in general.

Solitude and the pain of not being able to say goodbye
What did you think of this article?