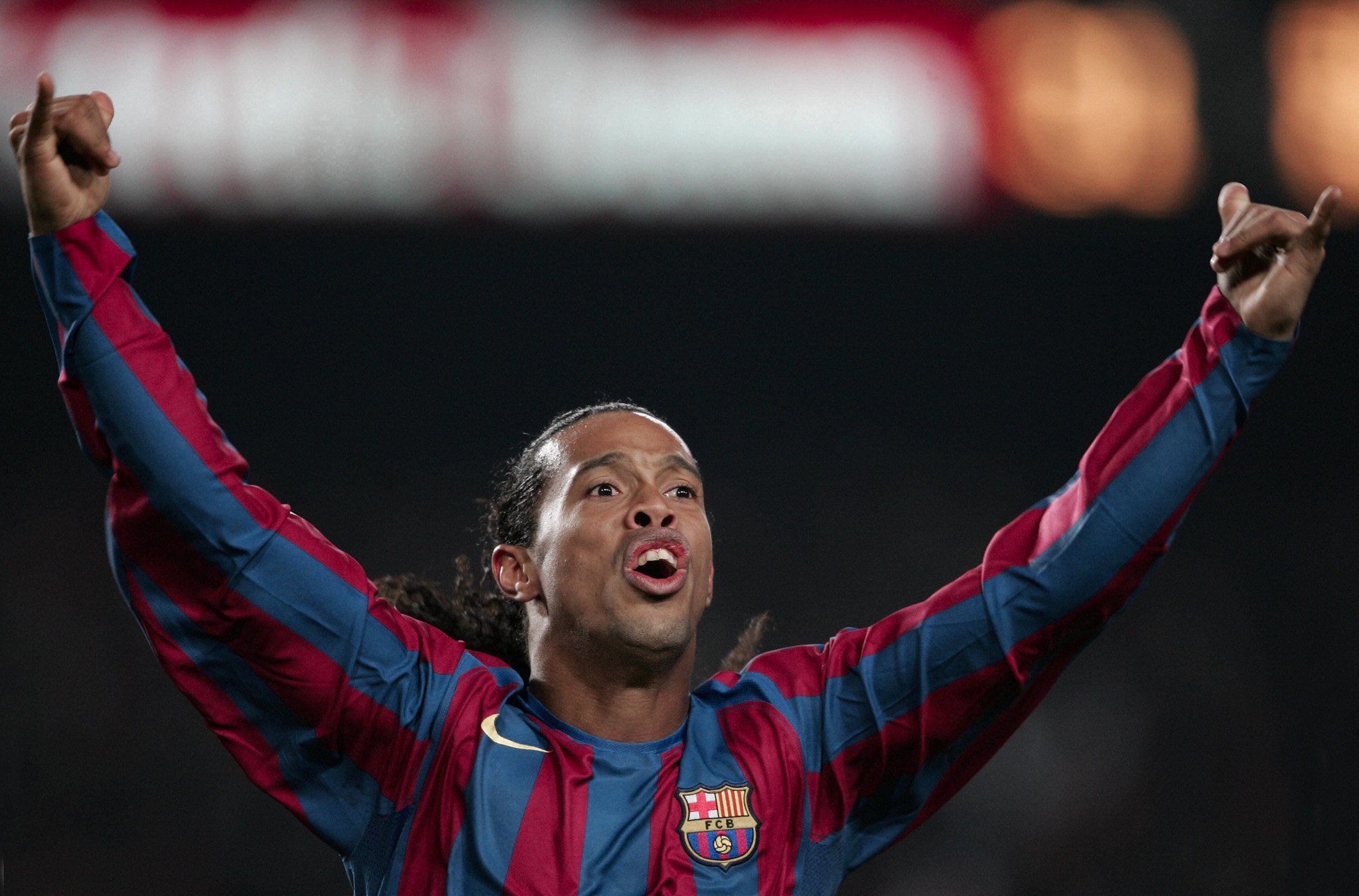 The greatest ever quotes on FC Barcelona legend Ronaldinho. Don’t miss anything that is said about the Brazilian international.

A total of 34 quotes on Ronaldinho.

• Deco: “Ronaldinho was more talented than Messi and Cristiano Ronaldo. When we didn’t know what to do, he would create chances to score.”

• Celso Roth (Ronaldinho’s first coach at Gremio): “I’ve worked with some great players in my time and all at a very interesting period in their careers, nineteen to twenty years old. But, with due respect to the others, Ronaldinho was a cut above the rest.”

• Lionel Messi: “Ronaldinho was responsible for the change in Barça. It was a bad time and the change that came about with his arrival was amazing. In the first year, he didn’t win anything but people fell in love with him. Then the trophies started coming and he made all those people happy. Barça should always be grateful for everything he did.”

• Henrik Larsson: “When I was at Barcelona, he was at the height of his career. Absolutely fantastic, the things he could do with the ball, and also the passing game he had was fantastic.”

• Lampard: “This man [Ronaldinho] was on a different level.” (Lampard paid a special tribute by posting a picture with him on social media)

• Kaka: “Ronaldinho is a champion. I hope he continues in this way because he is a great, and you see that he has a great desire to do well.”

“Ronaldinho was responsible for the change in Barça. It was a bad time and the change that came about with his arrival was amazing. In the first year, he didn’t win anything but people fell in love with him. Then the trophies started coming and he made all those people happy. Barça should always be grateful for everything he did.”

• Laurent Blanc: “I played against him when he first came to Europe to play for Paris Saint Germain in 2001 and even then you could tell he would one day become the best player in the world. He has unbelievable skill and so many tricks in his repertoire.”

• Ibrahimovic: “He is one of the strongest champions of all time.”

• Frank Rijkaard: “He knew exactly what he was doing. It was all pre-meditated although I have never seen him try it before, in training or matches. He thought what the wall would do and he pulled it off. It’s amazing but that’s what you get from the best player in the world.”

• Giovanni van Bronckhorst: “He is a world-class player. I hope he doesn’t go to the World Cup with Brazil ­because he’s unbelievable. He’s so strong and quick still. He can do amazing things with the ball.”

“Ronaldinho was virtually unstoppable at his best, as a forward or a playmaker.”

• Wayne Rooney: “Magic feet, but was not just about tricks – he created and scored the goals to match his ability.”

• Mikel Arteta: “For skills and tricks, Ronaldinho was the best player I’ve played with.”

• Rui Costa: “I had the good luck to experience him at first hand and to share many things with him. I can say that he’s a really great person and that’s the most important thing.”

• Neymar: “There are not many players who can offer goal-scoring passes like he can. He is just marvellous. He is a rare case of an assist man who can provide the ball from anywhere.”

“I learned a lot from Ronaldinho.”

• Willian: “He transmits a lot of joy and pleasure playing the game, and he has individual skills that are of such a high level that everybody in the world adores him.”

• Frank Rijkaard: This is not normal. He’s not normal, he never has been. He lives in the magnetic spectrum. What a goal this is. Beyond world-class. Astonishing. Cooler than a bomb disposal expert. That is amazing piece of football finishing by King Ronaldinho.

• Eidur Gudjohnsen: “Ronaldinho is very hard to stop because his game is impossible to read. He never makes the same feint twice in a row. Even when I’d watched several videos of him, he was still hard to counter. He is simply too unpredictable and sharp.”

• Roberto Carlos: “I learned a lot from Ronaldinho and Robinho. Football is a tactical game and you sometimes have to be serious. But they taught me to always do it with a smile and have fun. I spent hours watching their clips on youtube.”

• Eden Hazard: There was a period in Ronaldinho’s time at Barcelona where he was almost unplayable. Effortless, relaxed, always with a smile on his face, he’s a genius with the ball. I love Brazilian football and he is one of the best ever players from that country.”

• David Beckham: Ronaldinho when I was at Paris Saint-Germain was the most naturally gifted. When I played with him, he was unbelievable. His techniques, his natural ability to dominate the ball and the tricks he did was impossible. We tried for hours to do what he but couldn’t do it.”

• Diego Maradona: “Ronaldinho is the biggest idol in football for me. [ . . . ] In my opinion, I think that Ronaldinho, at that time [between 2003 and 2005], was bigger than Messi and Cristiano Ronaldo. Of course, Cristiano Ronaldo and Messi make a lot of goals, but what Ronaldinho used to do was unbelievable. He used to be amazing on the field, and also scored a lot of goals. As his fan, I think he stopped [playing at the top level] a little early. If he continued to play [like earlier in his career] he would certainly be three, four, five times in a row the best player in the world. He was two times [the best player in the world], and then I don’t know what happened, but if he wanted to continue that way, he would certainly be five times in a row the best in the world.”

• Ray Hudson: “It is fantastic how clever the guy is. He seems ready for every situation and the bigger the game, the more he can handle it. [ . . . ] He’s a great player and I guess that makes him psychic. When you play with him and see what he does with a ball, nothing surprises me any more. One of these days, he will make the ball talk.”

“He is one of the strongest champions of all time.”

• Daniel van Buyten:  “The greatest player in the world. Ronaldinho? Absolutely. I just can’t get enough of watching him play – he’s a delight for the eye. His technique is incredible, his touch, his vision, he scores and he orchestrates everything. He’s just the complete player. I know how difficult it is for a forward playing at this level, but for him it’s so easy. He does it every single game and it’s just unbelievable to watch.”

• Pele: “It is always a difficult task to pick out the best player but for me, Ronaldinho has been the one who played for the longest duration at the top of his game.”

• Frank Rijkaard: “He is the man that makes the difference between a team that plays well and another that is really memorable. Ronaldinho alone can decide one game.”

Ronaldinho and Messi, 2006 | Photo by LLUIS GENE/AFP via Getty Images

• Rui Costa: “There are not many players who can offer goal scoring passes like he can. He is just marvellous. He is a rare case of an assist man who can provide the ball from anywhere.”

• Zinedine Zidane: “Ronaldinho was virtually unstoppable at his best, as a forward or a playmaker.”

• Sergio Romas: “The best player in history? Ronaldinho. Because when he was at his best nobody could compare. He always had a smile on his face as well. He had skill, scored fantastic goals and put magic into the game.”

• Ruud van Nistelrooy: “Ronaldinho is total class – a very, very great player. He is quick, powerful, and has extraordinary technical qualities. He is a dribbler but is also a player who can make the play for his teammates. He’s not really a No.10, a true organizer. He’s more a second attacker who can score goals and has the vision to make them.”