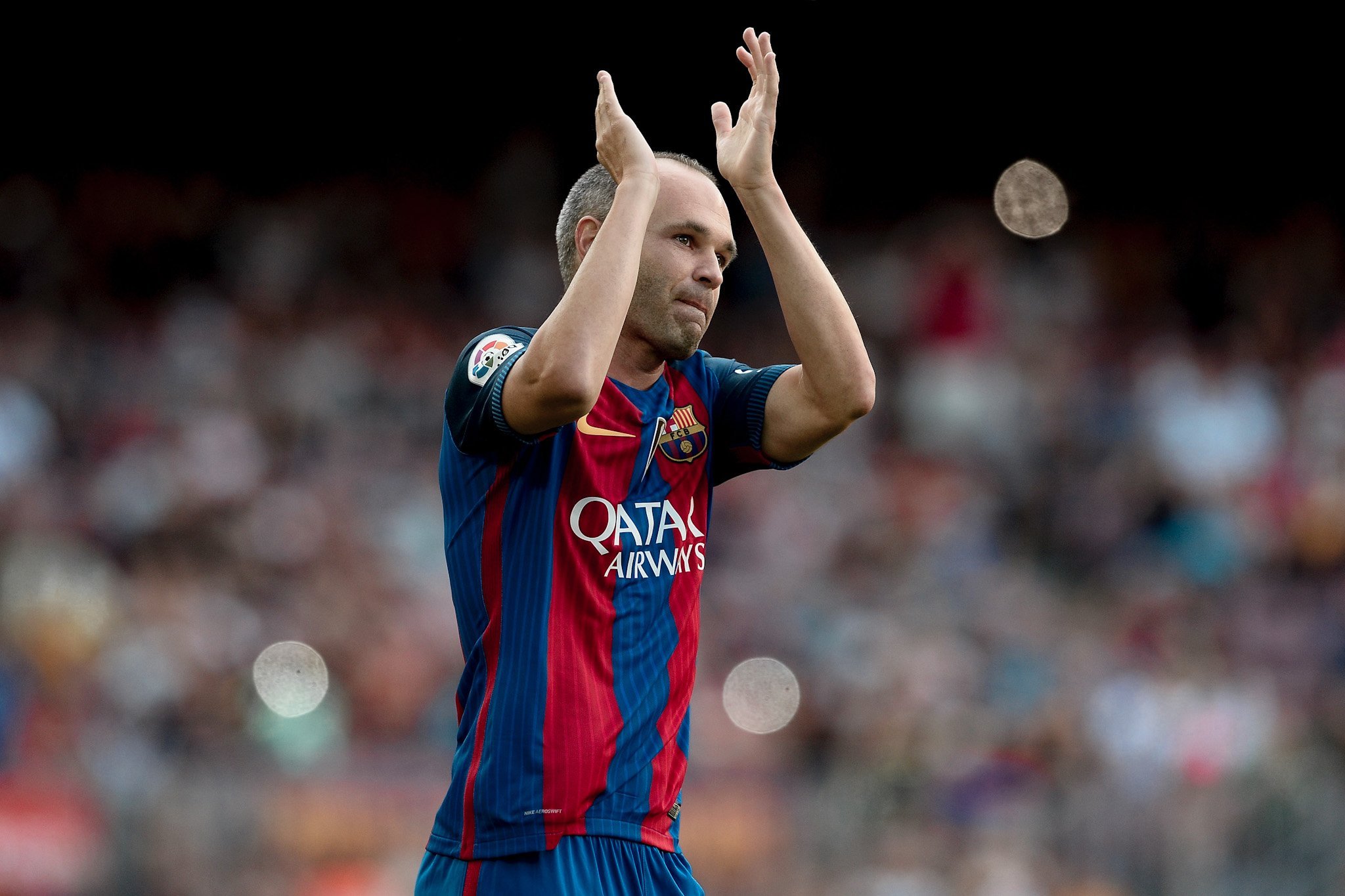 The greatest ever quotes on FC Barcelona legend Andres Iniesta. Don’t miss anything that is said about the Spain international.

A total of 28 quotes on Iniesta.

• Luis Enrique: “Iniesta’s the most inventive player in Spanish football at the moment. He’s like Harry Potter. One, two, three and whoosh… he’s past the player. It’s like he has a magic wand.”

•  Fernando Torres: “When he has the ball, it’s like everything else stops – like the camera is going in slow motion.”

• Pep Guardiola: “Iniesta doesn’t dye his hair, he doesn’t wear earrings and he hasn’t got any tattoos. Maybe that makes him unattractive to the media but he is the best.”

• Zinedine Zidane: “He reminds me of myself.”

• Sergio Ramos: “Iniesta is the boyfriend that every mother wants her daughter to have. The figures over his career tell you all you need to know. He is a magical player. There are few players in the world that can compare to him.”

“He’s fantastic. He makes the team work. The way he finds passes, his movement and ability to create space is incredible. He’s so important for Barcelona.”

•  Marco van Basten: “With Xavi, he has helped Barcelona dominate the Champions League for the past 10 years. With his passing, he is one of the greatest.”

• Ronaldinho:  “When I see him play these days, he reminds me of Xavi. He was always a top quality player. He started very young with us, and it’s crazy to see how he has gone on to make so much history.”

• Frank Rijkaard: “I played him as a false winger, central midfielder, deep midfielder and just behind the striker and he was always excellent.”

• Wayne Rooney (2009): “Barcelona are a brilliant team and in my opinion Andres Iniesta is the best player in the world.”

After his final game for FC Barcelona in 2018, Iniesta stayed at the Camp Nou all alone for hour | Photo by David Ramos/Getty Images

• Pep Guardiola: “He always moans that he doesn’t score enough, as if with everything else he does, he has to get goals too.”

“I’ve been playing with him since we were 15 and I have never, ever seen him play badly.”

• Samuel Eto’o: “When I said Iniesta was the world’s best, you laughed. Now you can see I’m right.”

• Vicente del Bosque:  “He is the complete footballer. He can attack and defend, he creates and scores.”

• Vicente del Bosque: “Technically he is perfect and he plays so naturally, almost without effort. It’s like when Roger Federer plays tennis, he barely sweats.”

• Juan Roman Riquelme: “I watch Iniesta and realise that, even at my age, I could be learning new things.”

• Lionel Messi: “Andrés and I are similar in that we both use our bodies a lot, to avoid opponents. But he has something that always amazes me. There’s always a moment when you think you’re going to catch him, when you think you’re going to get the ball off him, but you can’t. He’s not especially quick, but he has that ability to always get away from you, which comes from his technique.”

• Fernando Torres: “I’ve been playing with him since we were 15 and I have never, ever seen him play badly.”

• Sir Alex Ferguson: “He’s fantastic. He makes the team work. The way he finds passes, his movement and ability to create space is incredible. He’s so important for Barcelona.”

“Barcelona are a brilliant team and in my opinion Andres Iniesta is the best player in the world.” (2009)

• Joan Laporta: “He makes the difficult things look easy. He has a great attacking sense; he can go one against one, and his touch is fantastic. He is a playmaker, and he has a great team spirit. And, when needed, he scores goals which give us victories like the one at Stamford Bridge.”

Iniesta, Messi, and Xavi during the FIFA Ballon d’Or Ceremony in which the Barcelona players were the top 3 nominees, 2011 | Photo by FRANCK FIFE/AFP via Getty Images

• Pedro: “As a player, he is the best example to follow. Every single youth team player should look up to him.”

• Xavi: “Iniesta is easily Spain’s most complete player. He has everything.”

• Xavi: “Playing alongside him is very easy.”

“Iniesta is easily Spain’s most complete player. He has everything.”

• David Silva: “The press often ask me about whether Messi or Ronaldo is the best, but for me something is very clear: Andres Iniesta is the number one. He is able to do even more difficult things on the pitch. He is magic with the ball and so influential.”

• Dani Alves: “As a professional, as a person, and as a player, I think he’s fantastic. It’s like he’s dancing the tango. [ . . . ] I just love how he plays football so elegantly. To me, Andres is Don Andres.”

• Victor Valdes: “Andrés has been the best for years.”

• Gerard Pique: “He is an example of a La Masia player. Technically he is unbelievable.”

• Boris Becker: “It’s not that difficult to play well and win titles in a team like Barcelona, but it’s in the national side where you see a player’s true class. That was the case with figures like Pele, Diego Maradona and Zinedine Zidane. With Spain, Iniesta has shown that he is among the best players of all time and that’s why I rate him higher than Messi or Ronaldo. Even though the latter two have incredible scoring records for their clubs, they still haven’t won anything with Argentina or Portugal respectively.”