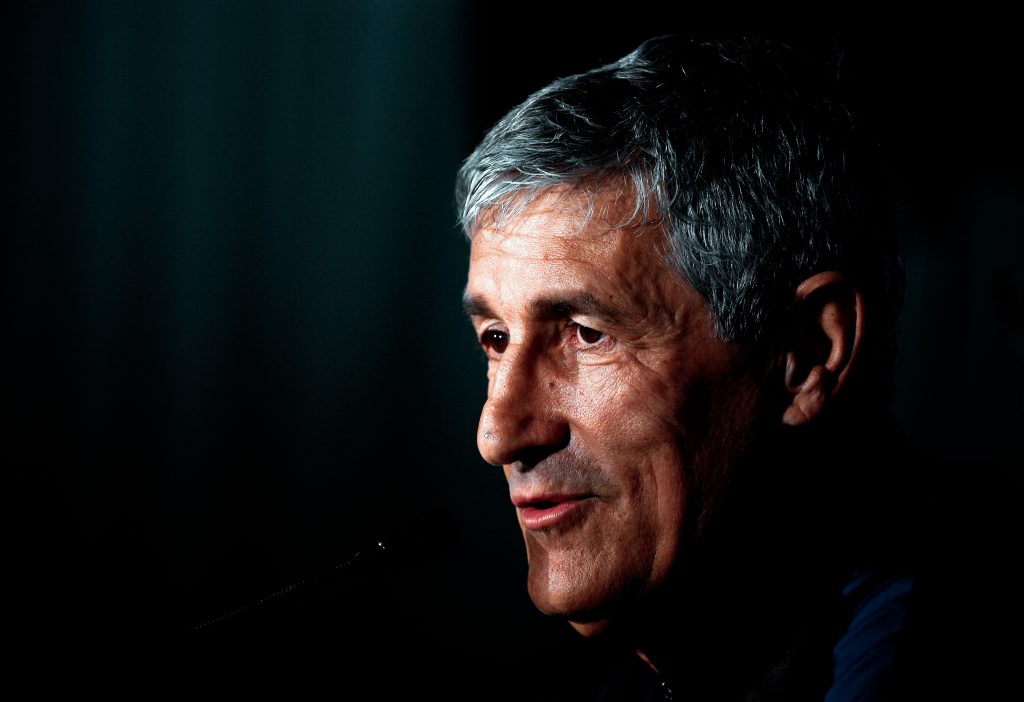 As football slowly resumes from the wrath of the coronavirus pandemic, we look at the objectives for Quique Setién towards the rest of the season.

After two months without football, it returned this weekend in the form of the Bundesliga. Most of the leagues have started their training sessions, and La Liga has permitted the clubs to conduct group training with ten players as the limit. The footballers have to live by some intense medical precautions and rules to help the cause. While it has been hard on a lot of people, the whole footballing industry rests on the game resuming as soon as possible, considering the money and labour involved.

❛ Maybe this break will
end up benefiting us ❜

With the potential restart date of La Liga being on June 12 or 19, teams are now in full preparation mode. Barcelona have successfully tested all the players and staff, and everyone has turned out to be negative. Naturally, the season objectives have changed or modified over the coronavirus break. So, what has changed and what should Quique Setién do to make of this a successful campaign after the restart?

As Bundesliga reopened, fans witnessed many of their stars getting injured mid-game or even before the game during warm-up. When footballers return to high-intense action after a two-month break without a proper preseason, injuries are imminent. And with the games scheduled very close to each other to complete the season as soon as possible, it is profoundly important to keep the players fit and ready.

Once La Liga resumes, the players will have spent almost three months without competitive action | Photo by FC Barcelona / Handout via Getty Images

UEFA to its credit has allowed up to five substitutions in a match. Managers can make substitutions on three different occasions during these, excluding the half-time break. With the extra substitutes and an increased matchday squad size of 23, it is the responsibility of the managers to make use of this.

Barça’s average age is very high when compared to other teams, with a lot of crucial players over their thirties. Given the age and the poor injury record of the club this season, Setién has to be very careful with the players. The likes of Suárez, Umtiti and Dembélé, when they return from their setbacks, must be threaded carefully with the next season also in mind. Rotation is now not an option, but a necessity.

One of Quique Setién’s early criticisms was that he did not live up to the promise of utilising La Masía. The B-team players have hardly made an appearance in the first team except for Ansu Fati. Despite making the matchday squad on many occasions, Riqui Puig and Álex Collado have rarely featured in the games.

Fortunately for him, this might be the right time to get back at those criticisms. With the squad stretched pretty thin and with a risk of a potential injury crisis, this might be the perfect occasion for young stars to get their minutes. Barcelona might have to play more than once every week due to the packed schedule, and the highly capable Barça B youngsters should get their chances.

Monchu, like Riqui Puig, Collado, Iñaki Peña and Araújo, has been the training with the first team these days | Photo by Imago

UEFA wants to finish their Champions League campaign by August. Therefore, the Catalan side must retain their stars to play in the tournament to win their most craved trophy. La Liga race is as tight as it gets, but believing in the homegrown talent in the time of crisis would show the trust the club has on them. Additionally, it would get them ready for next term, where Barcelona cannot make big signings and must rely on the players in hand.

Barcelona, like any top club, would love to compete in all competitions and try to win every single one. But, sadly, they have been knocked out of their ever-reliable Copa del Rey by now. The only two contests remaining are La Liga and the Champions League. The Catalans are ahead in the table by a meagre three points to rivals Real Madrid, with crucial fixtures forthcoming. Barcelona have already played the first leg of the Round of 16, coming out with an away goal advantage.

The blaugranas have been far from convincing when it comes to winning games by domination. In spite of owning possession for large parts of the clashes, the creative spark and the finishing touch have been missing. The forwards have struggled in front of goal much to the disappointment of the fans. With Suárez’s return from injury, there is a hope of revitalizing the attack.

❛ Perhaps Setién misunderstood or explained it wrong, but we cannot win the Champions League by playing like we did before the break ❜

While finishing the created chances is the responsibility of the attackers, Quique Setién must work towards generating more of them. Barcelona have been struggling against breaking low blocks or teams which press them high. With two months behind the scenes, the Cantabrian must have arranged a way past this. Once the team starts working together in both offence and defence, results could follow shortly.

The COVID–19 break has been hard on all of the footballing community. Nevertheless, winning after football resumes will make it at least a little bit better. Ultimately, the main goal of Setién and his men should be to make culés vibrate with their football again during such hard times.